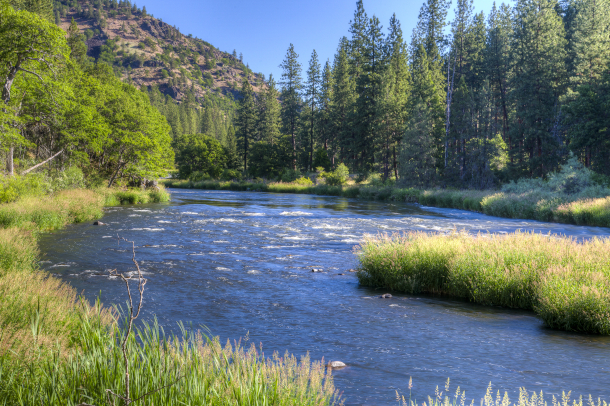 The Klamath River is one of only three rivers that bisect the Cascade Mountain Range, flowing from the high-desert interior through coastal rain forest to the Pacific Ocean. The river supports Chinook salmon, coho salmon, steelhead trout populations and other “anadromous” species that migrate between their ocean feeding areas and freshwater spawning streams. (Photo: Bob Wick, BLM, Flickr CC BY 2.0)

Environmental Health News Editor Peter Dykstra joins Host Steve Curwood to share good news for salmon on the Klamath River, where four major dams are slated to soon come down. Also, a survey finds that climate activists who threw soup on a Vincent Van Gogh painting may not have helped the cause of climate action. And in the history calendar, 11 years ago attorneys for Tokyo Electric Power tried to argue that the radiation released by its Fukushima plant was no longer the company’s problem – because it was owned by the people it fell on.

CURWOOD: With me now on the line from Atlanta, Georgia is Peter Dykstra. Yes, that Peter Dykstra, the one who is an editor for Environmental Health News–that’s ehn.org, also daily climate.org–and who brings us years of experience to looking at the environment. So, what do you have for us today during this Thanksgiving season, Peter?

DYKSTRA: Hi, Steve, and happy Thanksgiving, season to all. Some potential good news, especially if you're a salmon, making his or her way up the Klamath River in California and Oregon. And I'm not saying that you are a salmon, Steve, but here's what's going on. The world's largest potential dam removal may soon happen in the Klamath. It’s one of four that river basin. Removing the dams may affect the generation of hydropower, but it will certainly affect in a positive way, the ability of salmon to swim upstream to spawn and for both Native Americans and commercial fishermen to catch salmon in an area that used to be one of the most prolific areas for salmon in the entire Northwest.

CURWOOD: Yeah, I think some of the Native Americans have said that salmon is literally critical for their survival, and that these dams have, have really made their survivability quite difficult. So I'm sure they see that as good news. Hey, what else do you have for us today?

DYKSTRA: A couple of weeks ago there was news made in Europe because climate activists threw tomato soup on a Vincent van Gogh painting, one of his most famous, Sunflowers. There was a study done of Americans by the University of Pennsylvania to see if they thought that throwing tomato soup on a classic painting actually helped the cause of climate action. Forty six percent of the thousand surveyed said it did not. Thirteen percent said it helped. Forty percent said they didn't think it mattered at all. But that plurality of people surveyed, saying that an attempt to increase climate action support backfired.

CURWOOD: Well, thank heavens, the flowers, I think were encased in glass, right? They weren't damaged. But sounds like the movement that these folks are trying to start is being damaged by this tactic.

DYKSTRA: It is and to me if you carry it to its logical conclusion, it's like expecting the world to support you because you threw a pie at the Mona Lisa. It just doesn't make sense. And to me, it helps enforce the idea that climate activists are engaging in futility. That's not the right image you want to cast.

CURWOOD: Anything else you want to tell us before we head to history?

DYKSTRA: Yeah, one death that should be recognized is Herman Daly. He died at 84 earlier this month. He was the economics professor who introduced ecology with so much of its dismal outcomes to economics, the so called dismal science, married the two, which sounds like a pretty dismal career, but a very, very important one, to make sure that in dealing with global economics we recognize that birds and trees and water and air and everything on our earth has a price. And it could be a positive price or it could be a negative price in the face of environmental disaster.

CURWOOD: All right, let's take a look now at the history vaults. What do you see today, Peter?

DYKSTRA: Eleven years ago, November 24, 2011 attorneys for Tokyo Electric Power went into a Japanese courtroom where they were being sued for radiation damage from the Fukushima nuclear plant meltdown. And those lawyers argued that once that radiation was released, it was no longer Tokyo Electric’s problem because the radiation was owned by the people it fell on.

CURWOOD: You're kidding, Peter. They really made that argument in court?

DYKSTRA: Yeah, they did. The radiation argument did not stick with the judge no pun intended. It didn't get very far but it's an example of just how ridiculous some of the efforts to defend against environmental damage can get.

CURWOOD: Certainly is. Hey, thanks Peter. Peter is an editor with environmental health news, that’s ehn.org and daily climate.org. We'll talk to you again real soon.

DYKSTRA: All right, Steve. Thanks a lot. Talk to you soon.

CURWOOD: And there's more on these stories on the Living on Earth webpage. That's loe.org.

The Washington Post | “Herman Daly, professor who introduced ecology to economics, dies at 84”