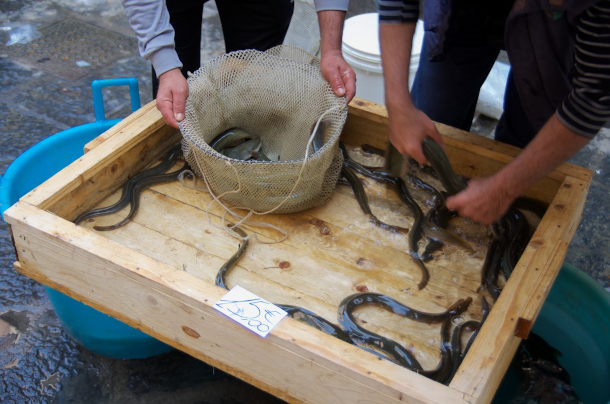 European Eels used to make up over half of the total fish biomass in Europe’s rivers, but their numbers have dwindled dramatically in the past twenty-five years because of overfishing, parasites, barriers to migration and ocean current changes. (Photo: Robert Nunn, Flickr, CC BY-NC 2.0)

European eels journey three to six thousand miles from the rivers of Europe to the Atlantic Ocean, and now thanks to satellite trackers, researchers have the first direct evidence that the Sargasso Sea is where they mate. Living on Earth’s Fern Alling unpacks the significance of this discovery and how it can help protect these critically endangered animals.

Coming up: mining for cryptocurrency can use as much energy as some entire countries, but there is a better way. But first this, note on emerging science from Fern Alling.

ALLING: Scientists recently announced they were able to track European eels all the way to their mating site in the Sargasso Sea for the first time. It’s a big deal: Dutch scientist Johannes Schmidt first suggested the Sargasso was their breeding ground ninety-nine years ago but it was never confirmed. Now, at long last, we have the technology to test his hypothesis. UK researchers traveled to the Azore Islands, the furthest confirmed point on the eels’ migration. There, they caught 26 adult eels and attached satellite trackers to them. Six of the captured eels made it to the Sargasso Sea after a year. Like other freshwater eels, European Eels spawn in the Atlantic ocean. Then, they swim three to six thousand miles to the rivers of Europe. And when it’s time to get it on, they journey back to the Atlantic. But there’s a lot we still don’t know. Adult European eels have never been caught in the act, and we’ve never found their eggs in the wild. At least now we finally have proof that the Sargasso Sea is the sensuous spawning site of this slippery species. Conservation biologists are excited by this information because it could make it easier to protect eels. European eels are critically endangered and at a greater risk of extinction than more charismatic species like pandas or blue whales. In some parts of Europe, they used to account for over half of the freshwater fish biomass. Now, it’s 5 percent or less. The more details we have about eels’ bedroom habits, the better we can protect them while they conduct their eel-icit affairs. That’s this week’s note on emerging science, I’m Fern Alling.