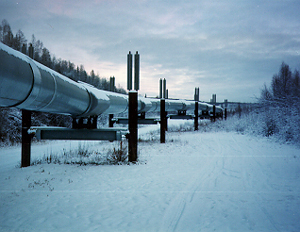 Exxon did pay $900 million in an out-of-court settlement with the state and federal governments. This money is being used to conduct groundbreaking science on the effects of oil in the environment, and to purchase thousands of acres of shoreline and protect it as wilderness. Also, a wide range of Alaskans offer their perspective on the lessons the spill has taught the state about its dependence on extractive industries like oil.

CASTELINI: This is just part of the quarantine ... oh, she just flipped out of the way over there...

CURWOOD: At the Alaska Sea Life Center in Seward, Science Director Mike Castelini points out an injured sea bird that's in for rehab.

CASTELINI: You can see her over there right now.

CURWOOD: The brand new Sea Life Center has labs, surgical suites, and special holding tanks for the rehab and study of marine animals. It's on the shore of Resurrection Bay. The center was built with money from Exxon's settlement with the state and the Federal Government.

CASTELINI: The Sea Life Center is one of the legacies of the settlement of the oil spill. It's an investment in the future, in terms of having a good facility to do science in. And it's also an educational facility.

CURWOOD: The center is part of a massive research effort to study the destruction and recovery from the oil spill. Kim Sundberg is its director.

SUNDBERG: A number of the studies that we're doing at the Sea Life Center are directly related to the recovery of animals that were impacted by the oil spill. For example, the river otter study, the harbor seal study, the pigeon gillemot study, the fish genetics. These are projects that couldn't be done anywhere else before the Sea Life Center was built.

CURWOOD: Altogether, since 1991, more than $200 million has been spent on studies in the spill area. So far, it appears, a few species have recovered, but many more haven't. And buried oil still haunts some beaches and stream beds.

CURWOOD: In one of the Sea Life Center's outdoor pens, biologist Merav Ben-David reassures a colony of river otters dining on fish in a plywood den.

(Various growling and other animal sounds)

CURWOOD: Dr. Ben-David fed her otters small doses of North Slope crude oil, similar to what still remains in parts of Prince William Sound. She says she ate some herself, just to be fair. The oil gave the otters anemia, limiting their blood's ability to carry oxygen, and, she says, making it harder for them to dive for food.

BEN-DAVID: Many of them, even though they were hungry, did not want to dive. Or if they dove, they dove very little and gave up very quickly.

CURWOOD: River otters are among the species that have recovered best from the spill. Still, Dr. Ben-David was alarmed by some of her findings.

BEN-DAVID: Once the animals have consumed oil, it doesn't matter if it was 10 grams or 50 grams. The anemia at least occurred no matter what. Which means that really small quantities of oil still out there can still affect the animals. Which is scary (laughs). That's not what I expected.

CURWOOD: Dr. Ben-David's findings echo the results of other new research on the effects of oil still in the ecosystem. Last year biologists found evidence that tiny traces of buried oil can harm pink salmon eggs, and affect their ability to survive as adults. Pink salmon still haven't recovered from the spill.

McCAMMON: The thing that has been most surprising is that we still are seeing injury to such an extent. I mean, 10 years is a long time.

CURWOOD: Molly McCammon oversees the research on the health of the spill area that's funded by the Exxon Valdez Oil Spill Trustee Council. Ten years later she says the region is still suffering from something like a chronic illness.

McCAMMON: To see full recovery is just going to take a lot longer, I think, than anyone had ever anticipated. We don't even know if there will be complete recovery achieved in the next 10 years.

CURWOOD: Early on the Trustee Council decided that the best way to help the region recover was by protecting as much habitat as possible for species hurt by the spill. Large tracts of land around the spill have been threatened by development. Losing it would add insult to injury. So, Molly McCammon says the Council has spent more than $400 million to acquire and preserve habitat.

McCAMMON: About 650,000 acres of land, and that's about the size of Yosemite National Park, this is the major restoration tool.

CURWOOD: Ms. McCammon calls the land preservation and the groundbreaking science the silver lining of the Exxon Valdez spill. But the programs have their critics, too. Some say the Council could have saved money by buying just development rights instead of full title to the land. Others say the expensive science just belabors the obvious, proving over and over that oil and water don't mix. Others say that if there's a silver lining, it's not about science or conservation. It's whether or not people have applied any lasting lessons from the spill.

CURWOOD: Recently, Alieska, an industry consortium which owns the tanker terminal in the port of Valdez, dedicated a special, high-powered tug boat.

WOMAN: In preserving and protecting these waters for all Alaskans.

(A bottle breaks against the hull; a crowd cheers)

CURWOOD: This tug is the first of an expensive new fleet which will be able to move even the largest disabled supertanker away from danger. Alieska President Bob Malone says these rescue craft show that the industry has learned its lessons about spill prevention.

MALONE: We've eliminated the risk into the high 90 percentile of the risk that was here 10 years ago.

CURWOOD: But Mr. Malone says the industry has learned another, more humbling, lesson as well.

MALONE: I can't promise anyone that I have eliminated all the risk. Human beings, Mother Nature, all are factors in this.

CURWOOD: The balance between the risk of another spill and the cost of avoiding one has shifted dramatically here in the last 10 years, but for many it still isn't right.

STEPHENS: I don't think we are there. I think we're a long ways from there.

CURWOOD: Stan Stephens is president of an oil industry watchdog group based in Valdez, and he pushed Alieska to buy these $20 million tug boats. He says industry is doing better, but he thinks that Alaska has yet to learn a bigger lesson.

STEPHENS: I think we are heavily weighted on the side of oil, what oil wants for the state of Alaska. I think we have a problem there. 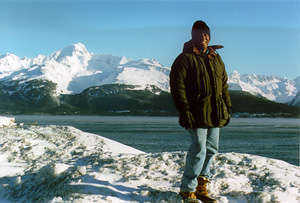 CURWOOD: The oil industry is a powerful force here. Until the recent oil price crash, oil royalties provided 80% or more of the state's revenue. Some people here say that one lesson of the Valdez spill is that Alaska needs to wean itself away from oil and other extractive industries. Others say the biggest lesson of the spill is that we should all start to wean ourselves off oil. In the fishing village of Cordova, people are still angry at Exxon, but Cordova author and marine scientist Riki Ott is mad at the rest of us, too.

OTT: When there's a spill, and there will continue to be a risk of a spill, who ends up paying for the spill? It's the victims. So essentially, people in Washington State and Oregon and California, by buying SUVs, are committing me to subsidize Exxon's or ARCO's or BP's next oil spill.

CURWOOD: Back at the Sea Life Center in Seward, 3 junior high school students haul a plastic container out of Resurrection Bay.

BOY: Pour it over there.

CURWOOD: The students pour the water into jars and stick in a thermometer.

GIRL: The surface, it was 4 degrees Celsius, and at 10 meters it is warmer.

CURWOOD: The students are collecting water samples as part of a special science project funded by the Oil Spill Trustee Council. They're collecting data for a scientist who's studying local shellfish and helping build a baseline of knowledge about the ecosystem. Inside the students analyze the samples.

GIRL: So we're taking the salinity of this water.

CURWOOD: If Alaska avoids another major oil spill, activists, industry, and government officials will all share the credit. But credit may well also be due to kids like these, who grew up in the aftermath of the Exxon Valdez.

GIRL: Sometimes this takes a while.

CURWOOD: For these kids at least, there is a silver lining to the spill. The Exxon settlement provided money for them to study and explore Prince William Sound. But they also understand the irony of their opportunity. Erin, who's 14, doesn't remember the area before the oil hit its shores. But she's glad there's at least now a commitment to take better care of it.

ERIN: Prince William Sound, it's an awesome place, but no one had really explored it. There was no reason to get funding for it. There was no one that was interested in going out in the cold. But because of the oil spill, they saw a reason like, well, this could possibly happen again, we should have the numbers to, you know, compare in case something happens again. And to find ways that we could prevent it.

CURWOOD: Too young to remember March of 1989, these students can hope without grief. Their teacher, Mark Swanson, has fostered that hope and his students' love for the area. But he can't see the world through their eyes. He's seen too much with his own.

SWANSON: I was actually teaching in a village that was 3 miles from the tanker when it ran aground. And it still is probably the most horrible tragedy that I've ever witnessed. It's difficult to actually benefit with a program like this. Given half a chance I'd give it all back, if we could get Prince William Sound back to the way it was.