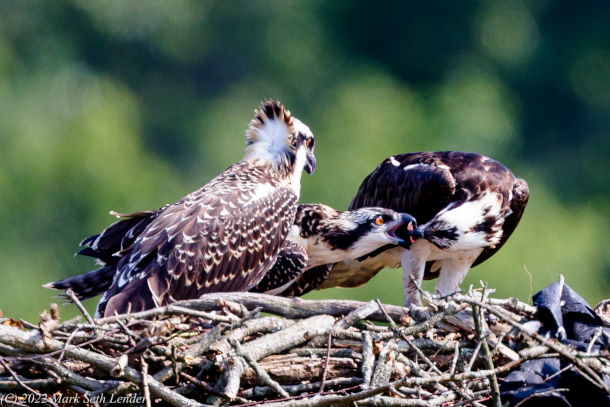 The osprey mother delicately drops a piece of menhaden into her chick’s mouth. His sister watches patiently on the side. (Photo: © Mark Seth Lender)

Living on Earth's Explorer-in-Residence Mark Seth Lender shares a reflection on how the availability of prey shapes the lives of young ospreys.

In the following season I found no nests with three chicks. At the most, there were two. The one described in this story, a well-established nest that I have been watching for a decade, hatched only two. Another a few miles away had consistently hatched three and sometimes four chicks and all of them always fledged. There the same, two chicks only.

Immediately one looks to the food chain. Those Venus figures from the caves of the Dordogne are voluptuous for a reason. Our species has always known that a reserve of adipose tissue is a necessary precondition to fecundity. What the body of a bird requires is particular and not necessarily the same. But as far as reproduction is concerned there are caloric minimums.

Ospreys are obligate carnivores. Here and there other prey will do (the occasional rabbit) but almost all nourishment has to come from fish because it is fish that ospreys are equipped to capture. Many things can affect fish populations, including heat (northerly Atlantic species don’t like it), lack of oxygen due to algae blooms from agricultural runoff and the filth from factory farms, the dumping of toxic chemicals, overfishing by “legal,” meaning acknowledged factory ships and by pirate fleets (of whom governments are well aware but choose to ignore). It is a worldwide catastrophe and it would be naïve to assume Long Island Sound somehow escapes its effects.

On the Connecticut shoreline ospreys are nonetheless increasing. There have been heroic efforts to protect the small and all-important forage fish that are near the base of the food chain and that effort has paid off. But these are uncertain times. Perhaps the ospreys sense it too.

Because the truly remarkable part of the story is that an osprey mother, no doubt anxious to be on her own way south in her necessary escape from winter (a season in an osprey’s clear-eyed view that by August is just around the corner), that such a mother would wait. That she would revert to her role as the equivalent of nursemaid as if her boy were still a baby when in fact flight was overdue and he should have been out in the world on his own. Imagine what it cost her. Also remarkable, the generosity of the sisters in allowing their young brother to feed while they only watched, this despite their own need and all they were about to face in their journey into the Unknown.


Listen to the corresponding essay by Mark Seth Lender