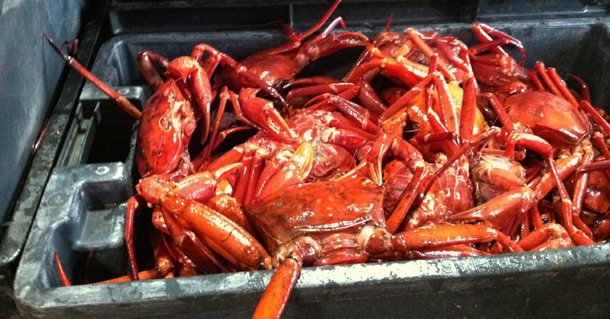 GELLERMAN: It’s Living on Earth, I'm Bruce Gellerman. With Black Friday just around the corner, stores are gearing up to satisfy our seemingly insatiable appetite for flat screen TVs, surround sound stereos, and fish. You might have noticed lately that Target, Walmart, and many big supermarket chains have been offering what they promise is certified sustainable seafood, but buyer, beware.

Today we launch a new series: Go Fish: Striving for Sustainability, and we join Living on Earth’s Jessica Ilyse Kurn as she investigates the pledges that stores have made.

KURN: Walk down the aisles of virtually any grocery store today and you’ll notice the many symbols on each package. There’s USDA Organic, Fair Trade, Certified Humane. So-called ‘eco-labels’ are everywhere - even on fresh fish.

GOVANNI: Anytime you see this seal or you see this one that says "Certified Sustainable," you’ll know that the fishing was done responsibly.

KURN: That’s Barbara Govanni. She works behind the seafood counter at the Shaw’s grocery store in Gloucester, Massachusetts. Shaw’s is one of the largest grocery chains in New England and along with other big name stores like Walmart, Target and Big Y, Shaw's has pledged to carry seafood certified by the Marine Stewardship Council.

Govanni points to the fish glistening on ice behind the glass case. There’s Alaskan halibut, and Wild Sockeye Salmon, both flagged with a Marine Stewardship Council, or MSC, sign. The MSC’s Kerry Coughlin says the label means that each fish can be traced back to a certified sustainable fishery.

COUGHLIN: We are the world’s leading global standard for sustainability in seafood.

KURN: The symbol is blue, with a white outline of a fish that looks like a check mark - a sign of green approval. There are several eco-labels for seafood, the most common you’ll see are 'dolphin-safe' labels. Coughlin says the MSC label means that the fish were caught in a way that’s not damaging the marine ecosystem.

COUGHLIN: It’s also harvested in a way that is not depleting the fish stock, where the fish stock is maintaining or even regenerating to ensure that there’s plenty of fish for this and future generations.

KURN: This is important. The United Nations Food and Agriculture Organization says 70% of the world’s fisheries are either fully exploited or on their way to depletion. So if we want to dine on fish and chips, or crab cakes, we have to figure out a way to protect the stocks. The MSC takes the business angle.

COUGHLIN: We’re a voluntary, market-driven concept and that’s the beauty of it. Fisheries are motivated to make changes because suppliers like Walmart, like Costco, like Whole Foods are saying, “we’re not going to be purchasing seafood anymore that isn’t from a certified sustainable fishery.”

KURN: Coughlin says their plan is to bring the whole market to bear on this - right back to the fishermen.

[SOUND OF FACTORY IN NEW BEDFORD]

KURN: Men like Jon Williams. We meet in his busy fish factory in New Bedford, Mass, on the aptly-named Herman Melville Blvd. He’s the owner of the Atlantic Red Crab Company, the largest crab company on the East Coast. It catches 5 million pounds each year, all certified by the Marine Stewardship Council.

KURN: Williams leads me through his factory out to the docks where men are unloading crab from the Krystal James, a large fishing boat just back from sea.

WILLIAMS: You’re probably going to see more crab right now then you’ve ever seen in your life in one spot.

[SOUND OF A BOAT BEING UNLOADED BY A CRANE]

KURN: A towering crane sits on the front half of the boat. It hauls crab from the hold to the docks, 60 to 70 pounds at a time. It takes 5 hours to unload the 75,000-pound catch from the Krystle James.

KURN: To win the MSC certification, Williams had to meet three main criteria. He had to prove that his operation was not overexploiting the red crab or damaging their habitat; he had to limit the dolphins, turtles, and other fish species caught by accident, and obey all laws, local, national and international - like restricted fishing zones. He says the hardest thing to prove was that crabs weren’t getting smaller overtime.

WILLIAMS: That would be an alarming trend - if over the years we still catch the 4 million pounds of crab every year, but the size goes down every single year, that’s not sustainable. And that’s for our own protection, we don’t want to start fishing on smaller crab either.

KURN: We clamber down off the boat and head to a corner of the factory where Kayla Schmidt is poking and prodding crabs to get some measurements. She’s from the National Marine Fisheries Service. It's a federal agency responsible for the stewardship of the U.S. marine ecosystem. Schmidt picks out 100 crabs at random from the boat.

SCHMIDT: We sex them out, we measure them, document them all; get the weight…just to get a better sense of the size crab, where they’re coming from - to get the stock assessment.

KURN: So far, the data show the crab fishery is resilient and plentiful. Williams says it took eight years to get his MSC certification, but it doesn’t seem to get him a higher price at the store.

WILLIAMS: It really shouldn’t. I don’t think that a fishery should capitalize on the fact that they’re sustainable and then gouge the consumer as a result of it. I just think that it’s been able to put us on more shelves that we wouldn’t otherwise be on.

KURN: But many fishermen have discovered that fishing sustainably isn’t just to get into more supermarkets, it’s also important for an enduring business.

[SOUND OF CRANE OFFLOADING CRAB FROM THE BOAT IN THE BACKGROUND]

KURN: The Marine Stewardship Council’s label is supposed to make it easier for the consumer to know which fish to buy. With labeled fish, eco-conscious shoppers won’t have carry around a wallet full of seafood guides, or do the research themselves. But some scientists say this simplification deceives the consumer. Jennifer Jacquet is a research scientist at the University of British Columbia. She finds the MSC’s method suspect.

JACQUET: They seem to be more, if anything, a fisheries improvement project, where they try to co-opt fisheries into this program and then they say that their goal is to raise standards over time. But that’s not how they marketed themselves to the consumer. To the consumer they’ve sold this idea that this is the best environmental choice - you are eating something that is guilt free.

KURN: Jacquet and her colleagues say that fisheries in decline should not be certified until their stocks have recovered. And she gives an example: when the MSC says 9 out of 10 of their fisheries are sustainable that could misleading.

JACQUET: I’d say ok which are the 9 and they might say rock lobster in Mexico, and herring in Norway. And ok, well which one is the one out of 10 that isn’t doing well? It might be pollock or it might be hake off of British Columbia.

KURN: In other words, big fisheries covering a large area that Jacquet and other scientists consider in decline. The key here is scale - tonnage of fish caught. But consumers don’t want to stop eating popular fish like cod, salmon and hake, so Jacquet says the MSC has two choices.

KURN: She says it would be better to give consumers a different message.

JACQUET: Eat less seafood, eat lower on the marine food web. And those are fish like sardines, herring, mackerel. The things lower on the food web, more resilient to over-fishing, faster turn around, shorter life span.

KURN: Back at the Shaw’s grocery store, Barbara Govanni wraps up some fish for a customer. She says that her clientele seem interested in this new campaign.

GOVANNI: It’s not necessarily something they think about - food on the table is what they’re thinking about, but when you put it right in their face: “look we’ve done this in a humane and sustainable way,” they think about it, and then they come back. So it brings questions if nothing else.

KURN: And consumers' questions spur discussion and debate, creating a groundswell of awareness. Critics say at the end of the day, the seafood eco-labels help, but they aren’t a get out of jail free card. Perhaps the key is, as Jennifer Jacquet advises, eat lower on the seafood chain - and that can taste good as well.

WILLIAMS: I think my favorite is just a traditional crabmeat roll. You just take cooked crabmeat with a little bit of mayonnaise and put it in a roll and just heat it. I mean I like the claws; I never get tired of crab.

KURN: And Jon Williams says he’ll keep his fishery sustainable so we won’t have to get tired of crab either. For Living on Earth I’m Jessica Ilyse Kurn.

Back to Go Fish: Striving for Sustainability