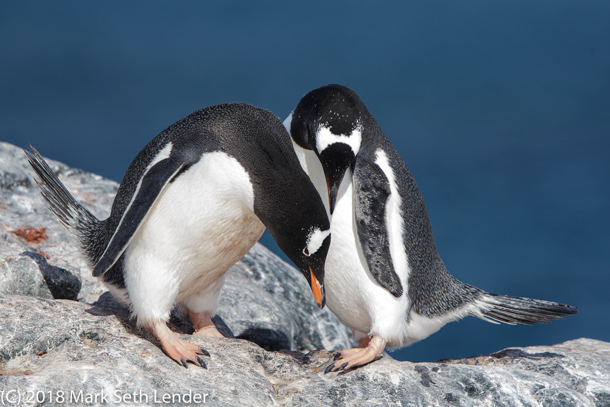 Living on Earth's Explorer in Residence Mark Seth Lender contemplates a seemingly human gesture made by two Gentoo penguins as they test out promising nesting sites.

Much of what you see in the field – or don’t – is in the timing. Trinity Island, off the northwest coast of the Antarctic Peninsula is remote and desolate to say the least. But on Trinity’s south end is Michelson Harbor and in the center of Michelson Harbor, a squib of land called D’Hainaut Island which is beautiful and strange and the serendipitous site of this story. I arrived there at the beginning of the gentoo penguin breeding season for the resident colony and was privileged to see what was probably the very first pair of penguins to pick a nest site for that year.

Gentoos do not allopreen (the practice of grooming each other). Which in turn means they are not expected to touch, intentionally. Where I truly had my luck was not just in seeing the female’s flipper resting on her mate’s foot but in the recognition of what it meant. Hence this working interpretation: that it was the same warming gesture as holding hands or more literally, touching the bare foot of the other of our species with whom we are in love.

On the evidence, gentoo penguins are capable of decision and rational consent based on an examination of the empirical facts and also perhaps, subject to emotion. And as with the rest of the conjectures offered in this collection, the weight of that evidence is broad. It comes from repeatedly observing similar sets of behaviors across many species and is therefore synthetic, rather than analytic. The choice is deliberate as much it is circumstantial. Circumstantial in the sense that to stay with one species for a very long period of time is cost prohibitive. Deliberate in that I am interested in comparative sets of data and the additive insights they provide, rather than a singular, species-focused and per force analytic approach that divides into the smallest empirical unit of meaning. In my approach then, the simplest explanation is usually similarity (between species including similarity to us) rather than difference (one species from another, and from us).

It is impossible not to be fond of penguins. Much of this is projection encouraged by their upright stance, and by their apparent harmlessness. Both impressions are compounded by how awkward they appear to be on land, endearing this bird whose only flight is within the sea. Perhaps our very liking of penguins is what leads science to the stern determination that intelligence, in any meaningful sense, is the exception in avian species and so we assign the greater share of what we observe in penguins to long-established genes directing small and simple brains.

Mark’s fieldwork and travel are arranged by Destination: Wildlife.