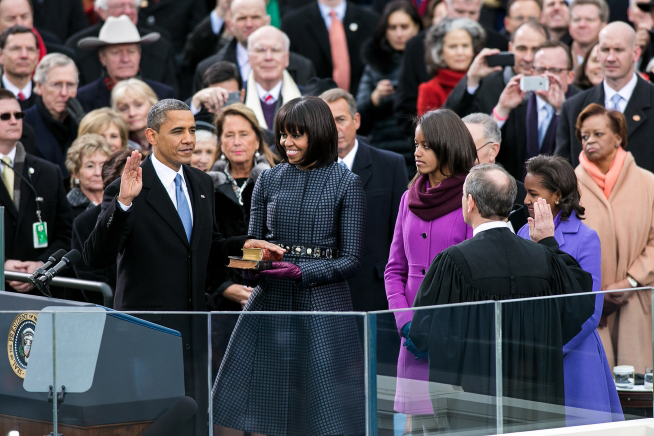 CURWOOD: From the Jennifer and Ted Stanley Studios in Boston, this is Living on Earth. I'm Steve Curwood. President Obama has pledged to fight climate change before, but as he spoke to the nation shortly after taking the oath of office on January 21st, he made climate defense a central goal his second term.

OBAMA: We, the people, still believe that our obligations as Americans are not just to ourselves, but to all posterity. We will respond to the threat of climate change, knowing that failure to do so would betray our children and future generations. [APPLAUSE] Some may still deny the overwhelming judgment of science, but none can avoid the devastating impact of raging fires and crippling drought, and more powerful storms. The path towards sustainable energy sources will be long and sometimes difficult. But America cannot resist this transition; we must lead it. We cannot cede to other nations the technology that will power new jobs and new industries, we must claim its promise. That’s how we will maintain our economic vitality and our national treasure - our forests and waterways, our croplands and snow-capped peaks. That is how we will preserve our planet, commanded to our care by God. That’s what will lend meaning to the creed our Fathers once declared. 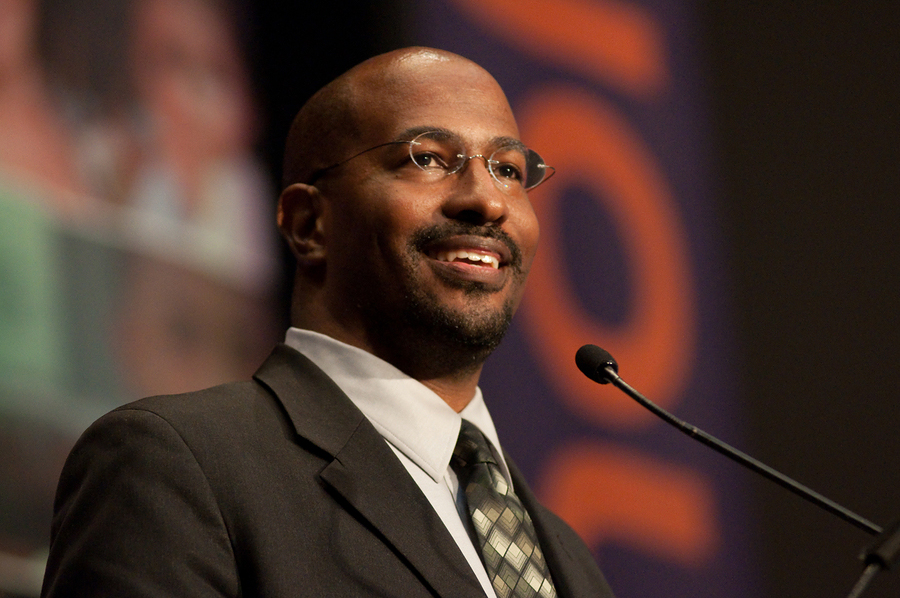 CURWOOD: Van Jones served President Obama in the beginning of the first term as a special assistant to green jobs. He’s now president of the organization, Rebuild the Dream.

JONES: I was really, really happy to hear him taking on the issue. You know, when you talk to this president or the administration, climate and energy are always number three or four, somewhere in the top five but never actually gotten around to. And I think it’s going to be number one, though, 20 years from now, 30 years from now. We will look back on a president who ran first on clean energy, on green jobs, on climate solutions in the first term, and did not deliver. And so I was happy to hear him going back to the things he ran on originally. And I think that, frankly, when you look at Superstorm Sandy hitting New Jersey and New York so hard, you look at this dust bowl forming in the middle of the country because of the drought, and you look at the wildfires that have just scorched the west, it’s really impossible not to talk about climate solutions if you really want to deal with what the American people are going through.

CURWOOD: Now the conventional wisdom is that the Congress is not likely to do a lot about climate in the near future. So as head of the Executive Branch of US government, what can President Obama do in this new term that he has if he wants to, and I’m quoting him here, “slow the rising of the oceans”?

JONES: Well, there’s three things he can do without Congress. Number one, he can refuse to approve the Keystone Pipeline which will let the tar sands go all around the world. The tar sands are this big carbon bomb up there in Canada. The scientists say if we burn all that super dirty fuel, it’s game over for climate. In order for the tar sands to come out of Canada, the US has to approve a pipeline. He can say no to that pipeline, number one. Number two, he can be tougher on our existing coal-fired power plants, which are a real source of greenhouse gases that NRDC and other groups are pushing for him to use his authority through the EPA, through the Clean Air Act, to cut carbon out of our existing coal-fired power plants.

JONES: Well number three, he can go to China. There is a big environmental catastrophe happening in China, not just carbon emissions, but just pollution, period. There are now protests in China from the grassroots, not just about labor conditions, but about air quality. China and the US are the biggest polluters. Frankly, pollution from China is now blowing into California where I live. They should sit down together and come up with some kind of agreement going forward. That would give him two years to build towards that summit, to do an educational role for the country, and after the midterms, since he’s got a better Congress, he’d be really in a good position to move aggressively and do something about this. He will be judged harshly 20 years from now, 30 years from now, if he has done nothing on the biggest threat I think that humanity faces – runaway catastrophic climate chaos.

CURWOOD: Now the governor of Nebraska has just approved the passage of the Keystone XL Pipeline through his state. How much of an environmental litmus test for President Obama is the Keystone question?

JONES: The Keystone Pipeline is the environmental litmus test for this President, for the new generation, the rising generation of environmentalists in particular. This is their first big fight on the environment. It was their first big victory more than a year ago. If the President takes that victory away from them, he is going to break the hearts of an entire generation of young people, whom he’s expecting to stay in his coalition through the midterms and beyond, and I think he should do the right thing by them, but also, frankly, do the right thing not just by the young people today, but by their children and their grandchildren. The tar sands are the dirtiest, most dangerous fuels on Earth. They should not come out of the ground. They certainly should not come through the United States. It’s not just a litmus test issue, it’s a leadership issue. Is he willing to match his rhetoric with deeds? And we’ll see very soon if he is.

CURWOOD: So, in other words, if he goes ahead with the Keystone...to use the colloquial...his talk at the inauguration about helping to fight climate change is just a bunch of jive?

JONES: Well, there’s probably some newer hipper language, but not fit for radio (laughs). My view, and I think the view of a lot of people is that there is one thing he can do, it is totally up to him, and in fact, Secretary of State Kerry, once he’s confirmed, to make a decision that could impact the direction of the climate on this planet forever, and he should make the right decision. And it’s very easy, unfortunately, to stand up and talk about America the beautiful, it’s going to take some courage to defend America’s beauty from the oil spillers and the mountain top removers and the Keystone Pipeline layers and all those people...and that’s what he’s going to have to do if he wants to secure his legacy.

CURWOOD: Now President Obama used to be your boss, he hired you at one point. From what you know of him, what do you think his decision on Keystone is going to be?

JONES: I think right now he would probably be inclined to approve the pipeline, especially given his setback of the Republican governor now reversing course, and I think he also will listen to his base. So I think it’s a question of the base now has to step up. I think he is going to have to be persuaded on the merits both politically, in terms of science, in terms of policy, to do the right thing. And I think the same time as I say that, I do want to stress, he is a President who listens. He has proven to be a President who takes his base very seriously, when the base gets vocal and gets insistent. That was true on immigration. It was true on marriage equality. It’s been true on the Keystone Pipeline up until now. It can be true again.

CURWOOD: Van Jones is founder and president of Rebuild the Dream and a commentator for CNN. Thanks so much, Van.

JONES: Thank you very much too. 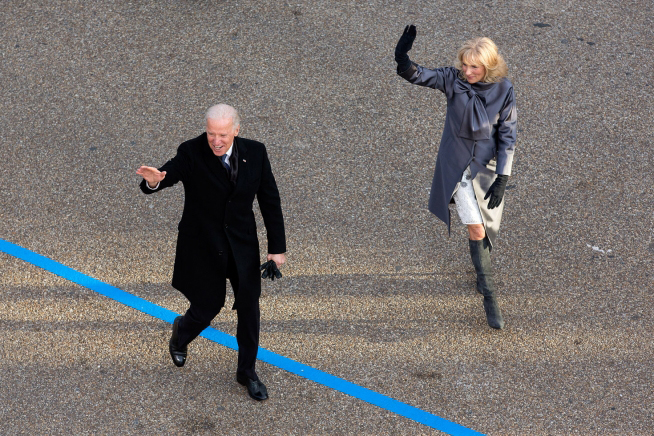 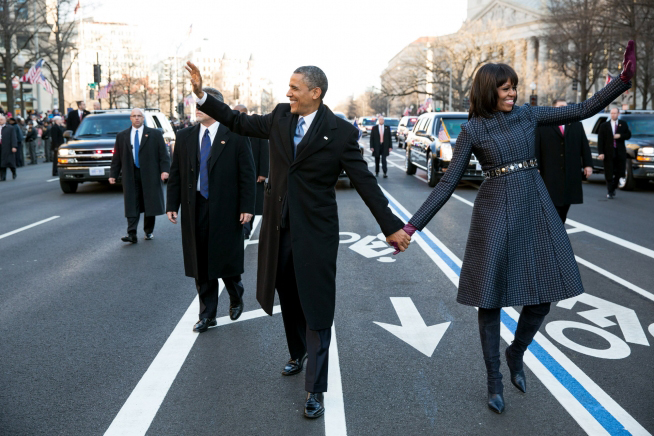 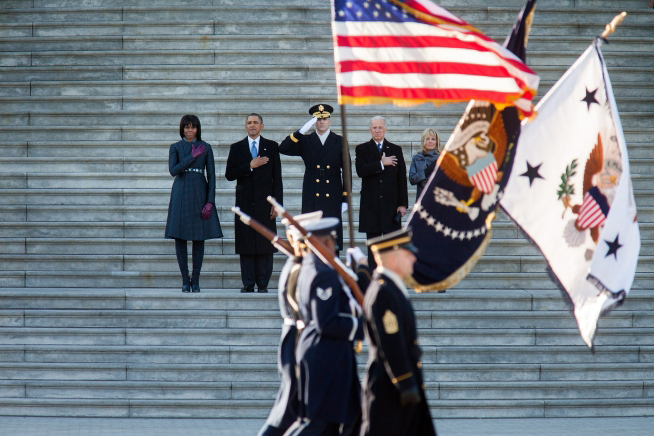 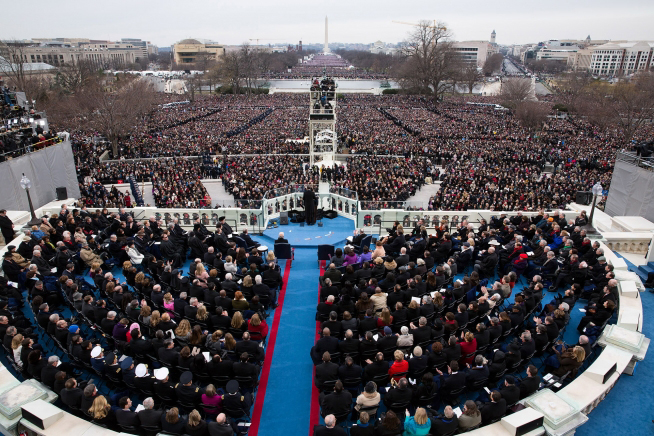 As many as one million people came to the Mall to here President Barack Obama deliver his inaugural address at the U.S. Capitol in Washington, D.C., Jan. 21, 2013. (Official White House Photo by Chuck Kennedy)


Text of the president’s inaugural address

Video of the inauguration