Mercury Dangers Around the World 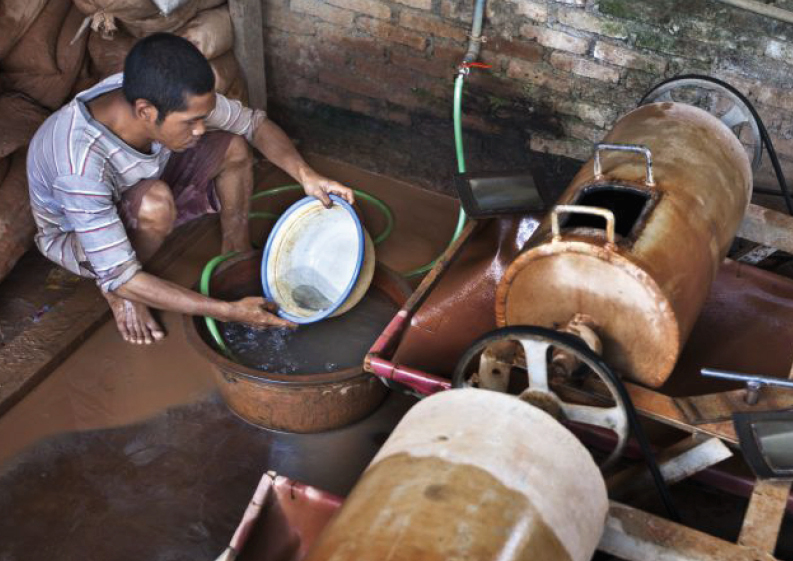 Small-scale gold miners add mercury to fine particles of gold. The gold binds to the mercury and can then be easily sifted out. (Biodiversity Research Institute)

CURWOOD: It’s Living on Earth. I’m Steve Curwood. Mercury, or quicksilver, is one the strangest heavy metals. It’s a shiny liquid at room temperature, and ancient alchemists were intrigued by its ability to dissolve other metals, including gold and silver, but not iron. But the ancients didn’t understand how toxic mercury is, especially to the brain and kidneys, and even fairly recently, it was widely used in medicine, including thermometers, dental fillings, and vaccines. It’s also abundant in coal, and with coal burning power plants on the rise, along with mercury-based gold mining, there are now dangerous levels of mercury pollution worldwide. That’s according to David Evers, executive director of the Biodiversity Research Institute who spoke to us from Geneva. Mr. Evers and his colleagues recently tested mercury levels around the world, and produced a report called “Global Mercury Hotspots”.

EVERS: We found mercury to be very ubiquitous in the environment. We found it in the marine ecosystems, in freshwater ecosystems, we found elevated levels in the northern hemisphere, as well as the southern hemisphere. So that was the interesting finding from this, is that wherever we looked, we found mercury to be quite elevated. Some of the places that we found especially elevated are in eastern Asia, in India and China in particular, as well as Europe in the Mediterranean Sea, and parts of South America.

CURWOOD: What’s the source of all this mercury in the environment worldwide?

EVERS: I think there’s two categories. Thirty-two percent of the emissions are from small-scale gold mining. So that’s the use of mercury to amalgamate with gold while you’re in the field, and to burn that mercury off so you have gold left in the bottom of your pan. That burning of that mercury and that release into the air by 20 or more million people is adding to the mercury emissions into the global pool. And the second piece is the coal-fired power plants. So the burning of coal...in some ways you’re burning in an instant potentially thousands of years of mercury deposited in that piece of coal by nature. So those are the two sources of mercury that are probably most problematic at a time at a global level.

CURWOOD: In the US, of course, there are not a lot of people practicing small scale gold mining, so is it safe to say most of our exposure in the US, the mercury is coming from fish...and could you please then explain that mechanism of exposure? 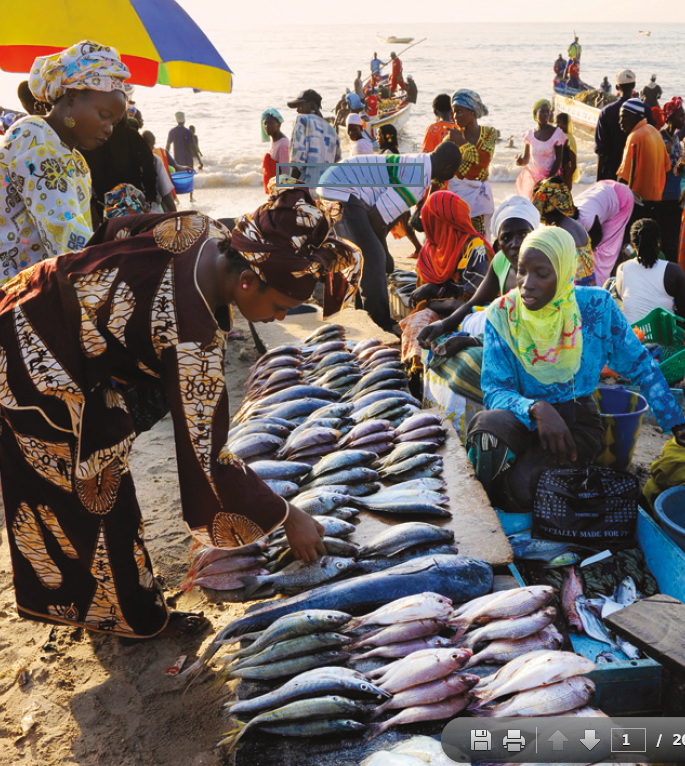 Fish are the principle source of protein in many developing countries. Researchers worry that millions of people are consuming mercury at unsafe levels in the form of fish. (Biodiversity Research Institute)

EVERS: Sure. The exposure for an average person in the US is primarily through methylmercury in fish. It’s the larger organisms that live long that are on the top of that food web that are most problematic. And a lot of times you’ll see in the newspaper or wherever and you’ll hear about tuna and swordfish, and it’s very true. Those are species that are long-lived and are on top of that food web that carry enough methylmercury in their bodies that if we eat them regularly, then that can increase the mercury levels in our own bodies to troublesome levels. 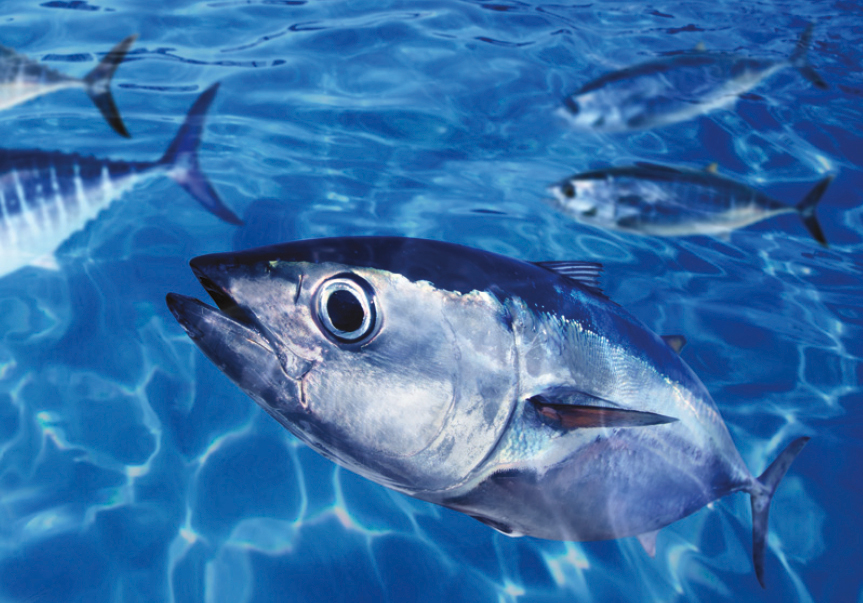 Some tuna species are known to be exceptionally high in mercury and are not safe for consumption. (Biodiversity Research Institute)

EVERS: First, fish is a very good resource for us to use, and we have to be smart about our choices and our picks. Generally, farm-raised fish are lower in mercury than wild fish, and some fish have higher mercury levels in their bodies, but they may have very good omega-3 fatty acid levels in their body. So sometimes there could be tradeoffs in choosing which fish you want. If you want to eat fish low in mercury, and high in omega-3, salmon and herring are very good for you.

CURWOOD: And what about freshwater versus the ocean?

EVERS: Both sort of ecosystems, marine and freshwater, have the ability to methylate mercury and get up into the food web where it can cause some harm to us. And if we look at species of fish that we commonly eat in the Great Lakes region, for example, such as pike, or walleye, or bass, those are fish species that can commonly get over one part per million, which is fairly high.

CURWOOD: You looked closely at 14 different countries for mercury exposure. What was the percentage of people that had concerning levels of mercury in their hair?

EVERS: In those 14 countries that we examined, we found that 84 percent of the mercury in fish were over our threshold level that we used of .22 parts per million. That’s equivalent to one, six-ounce fish meal per month. And we also found in the hair samples of people around the world in these 14 countries that 82 percent of the hair samples exceed the EPA’s reference dose of one part per million.

CURWOOD: Now, last year, in 2012 that is, the US EPA promulgated the mercury in air toxic standards which will remove 90 percent of mercury from coal-fired power plants in the US over the next couple of years, so we’re making good progress in this country, but China and India are pretty busy with coal-fired power plants. How freely does mercury travel around the world, and what kind of emissions of mercury are we headed for if these new power plants in Asia continue to grow? 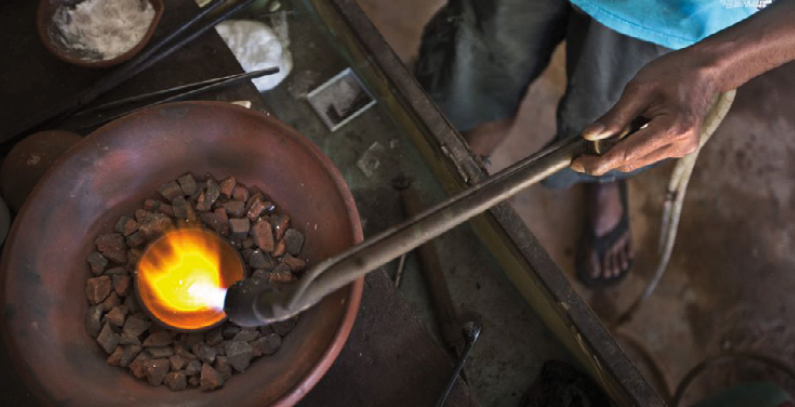 After the mercury and gold are bound together miners burn them so the mercury vaporizes and all that remains is pure gold. The miner can inhale the vaporized mercury. (Biodiversity Research Institute) 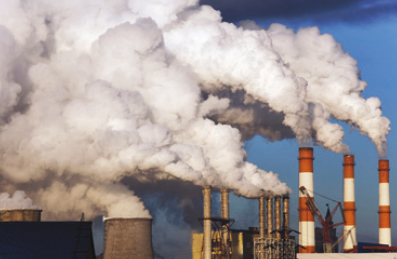 Along with artisanal gold mining, coal fired power plants are one of the biggest sources of global mercury emissions. (Biodiversity Research Institute)

EVERS: The US has really pulled together, I think, a very good role that will be successful in removing 90 percent or more of mercury from emissions from coal-fired power plants, and I think that can be done quite quickly. Probably a bigger looming problem is the mercury that’s getting up into the upper atmosphere, that global pool. And some of the key sources, for that mercury in the global pool, are China, India and coal-fired power plants. And so once that mercury is up into the global pool it does move over across the northern hemisphere, across North America, and it does deposit in North America. How much that will impact in US and Canada is still something that a lot of modelers are looking at. A lot of people are trying to better understand, but I’ll mention a study I had in the Great Lakes. We found that there was an uptick in the last decade of mercury in different species of fish, and birds, and other organisms. And so I think it is something we need to keep in our mind that even though we do clean up our backyard there is more work to be done.

CURWOOD: David Evers is the executive director of the Biodiversity Research Institute. Thanks so much for speaking to us from Geneva.

EVERS: You bet, Steve. Thanks for having us on the show. Thank you.