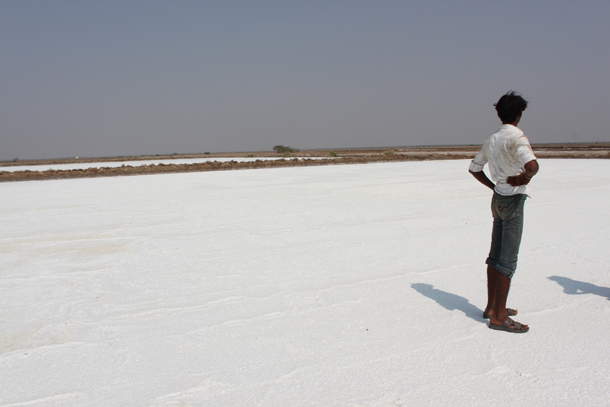 The water has evaporated, leaving just the salt behind. (Photo: Henry Peck)

Harvesting salt is a way of life for thousands of Gujarati villagers in western India, and it's hard work in difficult conditions. As Meara Sharma reports, landowners and middlemen make a handsome profit from salt, but not the villagers who toil in the burning sun.

CURWOOD: For the last few months, cities and towns across India have been celebrating a slew of holidays, from Navratri, which honors the nine forms of the goddess Durga, to Diwali, the festival of lights. But for thousands of villagers in the western state of Gujarat, the festival season heralds a more somber kind of movement. In this season, thousands of Gujaratis migrate from their villages to salt harvesting sites, some along the coast and others deep in the desert, where they will remain for eight months to work in India’s multi-million dollar salt industry. From the Gujarati coast, reporter Meara Sharma has our story.

SHARMA: On the western coast of India in the state of Gujarat, tidewaters from the Arabian Sea spill into large, shallow rectangles cut into the earth. These are called salt pans. A checkerboard of hundreds of pans runs along the shore, and the crystals sparkle in the blazing sunlight. The landscape looks like an overexposed photograph.

SHARMA: Salt has always been an important commodity in India, but it was controlled by the British during colonial rule.

SHARMA: 82 years ago, Mahatma Gandhi led thousands of people to the Gujarat coast in a march to protest the British monopoly over this native resource. The march energized Gandhi’s civil disobedience movement, and salt became a tangible symbol of Indian independence.

SHARMA: But today, Arjun Bhai and his fellow laborers face a harsh reality in the Indian salt industry. Each year, Arjun and thousands of other villagers, leave their homes behind to work in the salt pans of Gujarat. It's incredibly barren here and there's no escape from the scorching sun.

Arjun says they will live on the pans for eight months harvesting crystals of the sea. 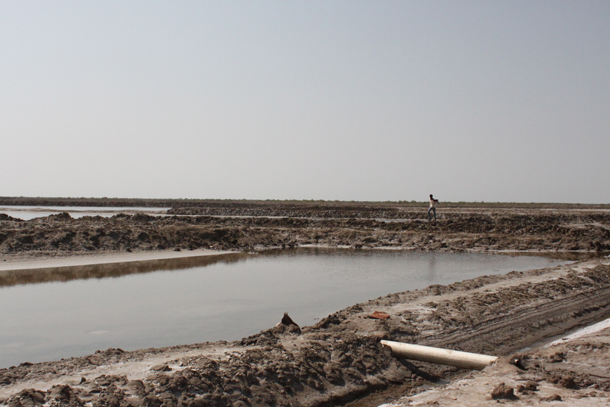 Sea water is funnelled into pans to evaporate for the salt harvest. (Photo: Henry Peck)

TRANSLATOR: They will plough this again. And after 25 days, they will get salt.

SHARMA: Each salt harvest takes 20 to 30 days. First, workers dig narrow canals to fill the shallow pans with tidewater that flows from the sea. Then, the sun goes to work, beating down on the pans and heating the seawater to the optimum temperature for crystallization - 75 to 80 degrees Fahrenheit. The laborers use crude shovels to gather the salt, and then carry the harvest in buckets on their heads to communal heaps where it glistens in the sunlight.

TRANSLATOR: It is shining. Yes, you can see it sparkling. This is salt – that shining thing.

SHARMA: Each pan yields about 200 tons of salt per year. It's an industry worth 200 million dollars and industrialists and landowners reap enormous profits. But the laborers in the salt pans endure unforgiving conditions and a punitive labor contract to eke out a living.

TRANSLATOR: We receive an advance of 15,000 rupees at the beginning of the monsoon season. The monsoon lasts for 4 months, and there is no work during that time. After the monsoon we must come and work in the salt pans for the next 8 months. 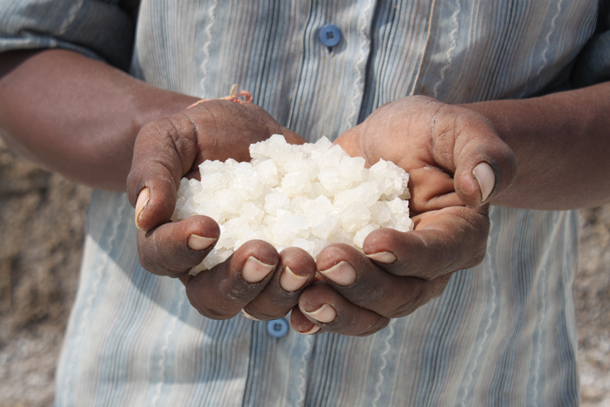 SHARMA: 15,000 rupees is about 300 hundred dollars. That might seem like a large sum for a laborer in India, but it’s all these workers get, all year.

TRANSLATOR: But the hidden condition is that they have to work here only. Right, yes of course.

TRANSLATOR: Suppose if you get wound here, some injury, and you put your leg or hand in the water, it is very paining. 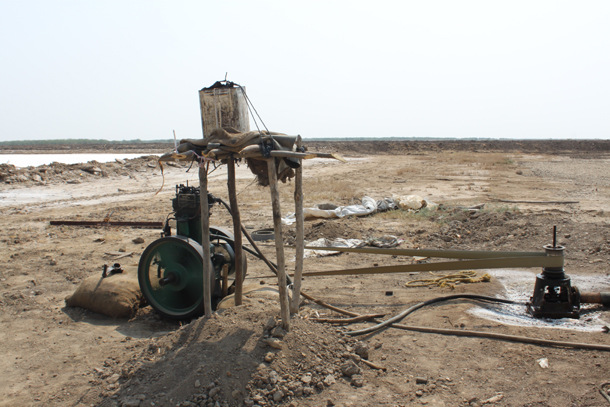 A pump brings briney water up from deep under the desert. (Photo: Henry Peck)

SHARMA: The pans on the coast aren’t the only source of salt in Gujarat. Further inland, a white desert called the Rann of Kutch is home to a different kind of salt production. This desert was once submerged in the Arabian Sea, and the groundwater is still full of salt. Here, bore wells are dug hundreds of feet deep, and salty water is pumped into pans above ground.

SHARMA: The sound of the bore well pumping is constant and grating. But this process is necessary for collecting what some argue is a superior kind of salt.

SHARMA: Which is better?

TRANSLATOR: This is best quality. Because this is from underground water. Marine salt is like this - grainy.

SHARMA: Yes, and this is crystals.

SHARMA: On the coast, hundreds of workers harvest side by side, but the desert is a lonely place. The six members of the Raja family tend to four pans between them. Their house is a rickety structure made of tree branches, grass and plastic tarp. Around them, there’s no fresh water, no shade, and no visible roads – just cracked, dry earth.

SHARMA: Do they ever feel afraid, being so far away from water, or other people?

TRANSLATOR: No, absolutely not.

MAN: They are very brave.

SHARMA: Yet laborers in the desert are subject to the same kind of inequitable work agreement as those in the coastal pans. They receive a single payment at the beginning of the monsoon, and must commit to work for the rest of the year. But for all these workers, there are advantages to the system. Back on the coast, Arjun tells us that receiving a lump sum allows family members to pool their earnings and pay for important events - like weddings.

TRANSLATOR: I had to pay a dowry for my daughters when they got married. This is 50,000 to 60,000 rupees. With our family income from working here, we have that much money at one time and we were able to pay these dowries.

SHARMA: In this region of Gujarat, the caste system still tends to define social roles and occupations. Arjun Bhai and the Raja family are part of the Koli community, who have traditionally worked in the salt industry. And for many members of this community, including Arjun Bhai, salt work is an inherited profession.

SHARMA: How long have you been working here?

SHARMA: And your family as well?

TRANSLATOR: His forefather was working same, his father’s work is same, since long.

SHARMA: Despite the grueling way of life on the salt worksites, laborers are proud to be part of an industry that Gandhi made the symbol of their country’s independence movement. 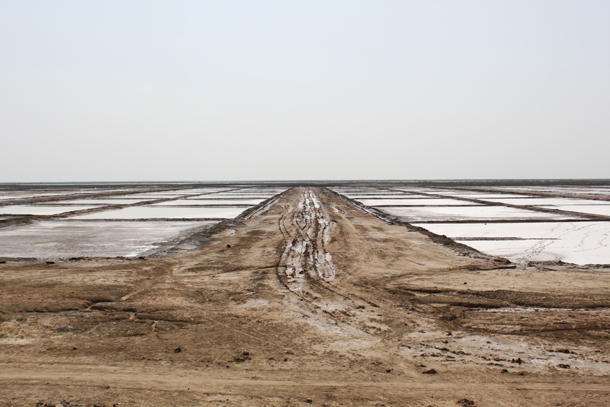 There are hundreds of salt pans along the coast. (Photo: Henry Peck)

TRANSLATOR: He made a good garden for us, Mahatma Gandhi. India is a garden. It was spoiled by another country. But Gandhi renovated it.

SHARMA: And for the laborers in the salt pans, even the desert is a fertile part of this garden. They’ll be there, tilling and harvesting salt, until next summer, when the monsoon rains return.

For Living on Earth, I’m Meara Sharma in Gujarat.