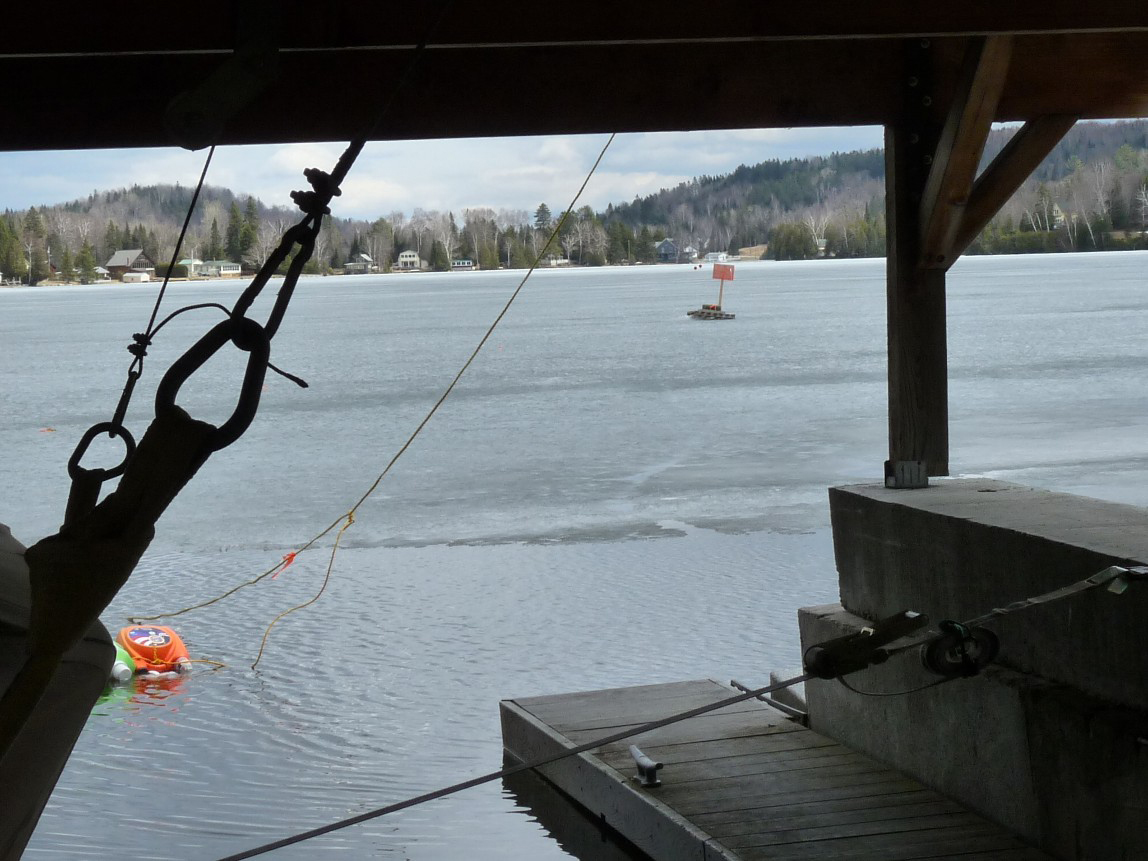 The ice begins to recede from the shore before the flag goes through (photo: Jane and Fred Brown)

Every spring, Central Vermonters flock to general stores to buy tickets to the Joe’s Pond Ice Out Contest. If they can correctly guess when a flag will fall through the frozen pond, they’ll go down in the history books, and win a decent chunk of change. Living on Earth’s Emmett FitzGerald reports from West Danville, Vermont.

CURWOOD: Spring is well underway in much of the country, but way up North in Vermont, winter is only now loosening its icy grip. And that means it’s time for little Joe’s Pond, tucked between the towns of West Danville and Cabot to step into the spotlight. As the thaw takes hold, Vermonters head to general stores throughout the state to buy tickets for the Joe’s Pond Ice Out contest. Living on Earth’s Emmett FitzGerald - Vermont born and bred - has the story. 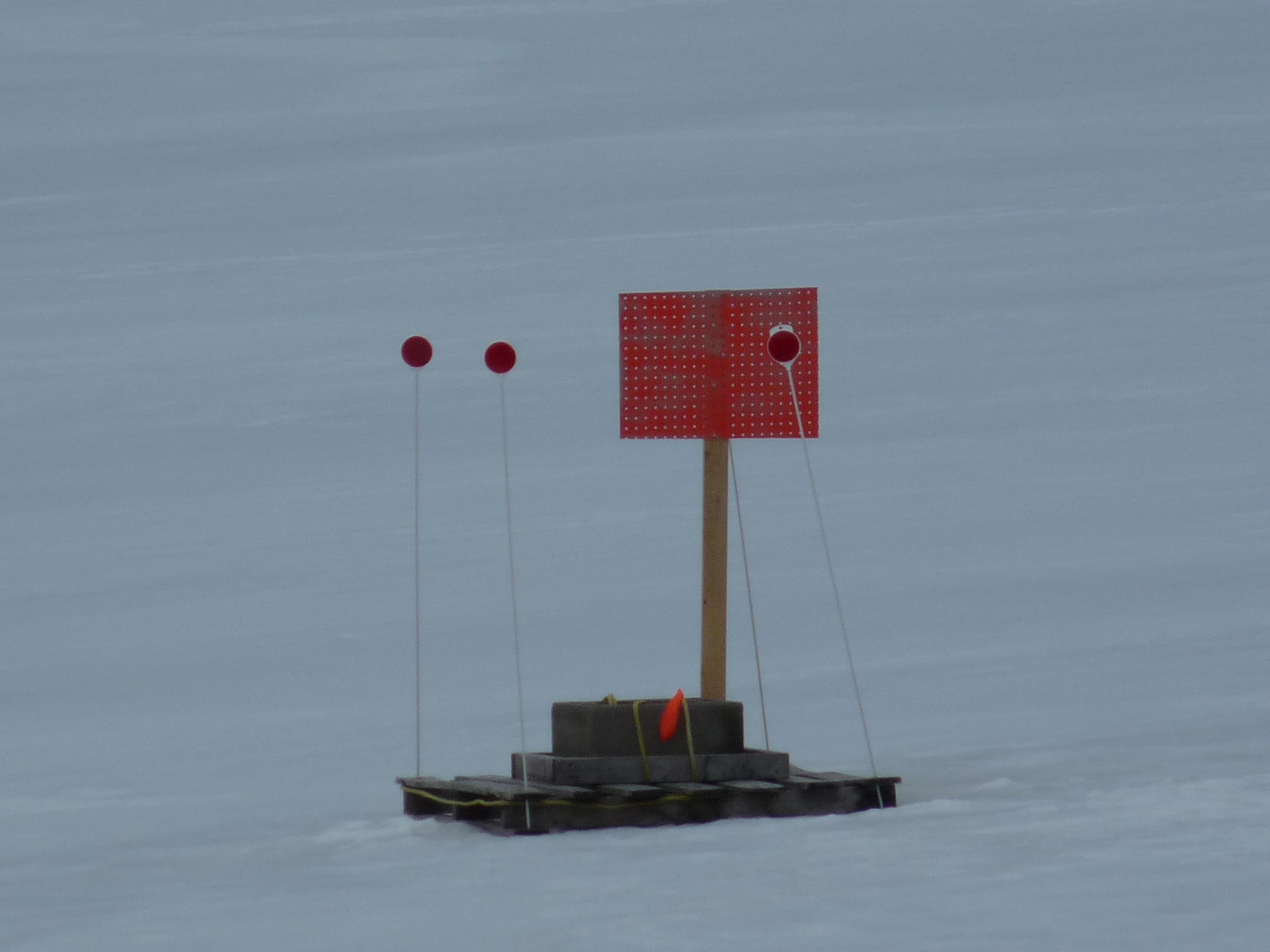 FITZGERALD: All you have to do to win the Joe’s Pond Ice Out contest is guess the precise time that a flag attached to a cinder block resting in the middle of Joe’s Pond in West Danville, Vermont, will fall through the melting ice. The Ice Out title goes to the best guess.

JANE BROWN: Whoever comes closest, or, usually it’s right on. The exact minute.

FITZGERALD: Jane Brown is the current co-chair of the Joe’s Pond Association’s Ice Out committee. When the contest began in 1988, only a few hundred people took part. But, she says, the competition has grown.

FITZGERALD: Tickets go for a dollar a piece. The organizers take out their expenses, then the pot is split between the Joe’s Pond Association and the contest winner. This year, it’s decent chuck of change.

FITZGERALD: I grew up in Montpelier about 30 miles away from Joe’s Pond. As a kid I saw Ice Out tickets for sale in local shops and wondered about the contest, so I decided to check it out. I met Jane at her house, and her husband Fred took me down to the pond. 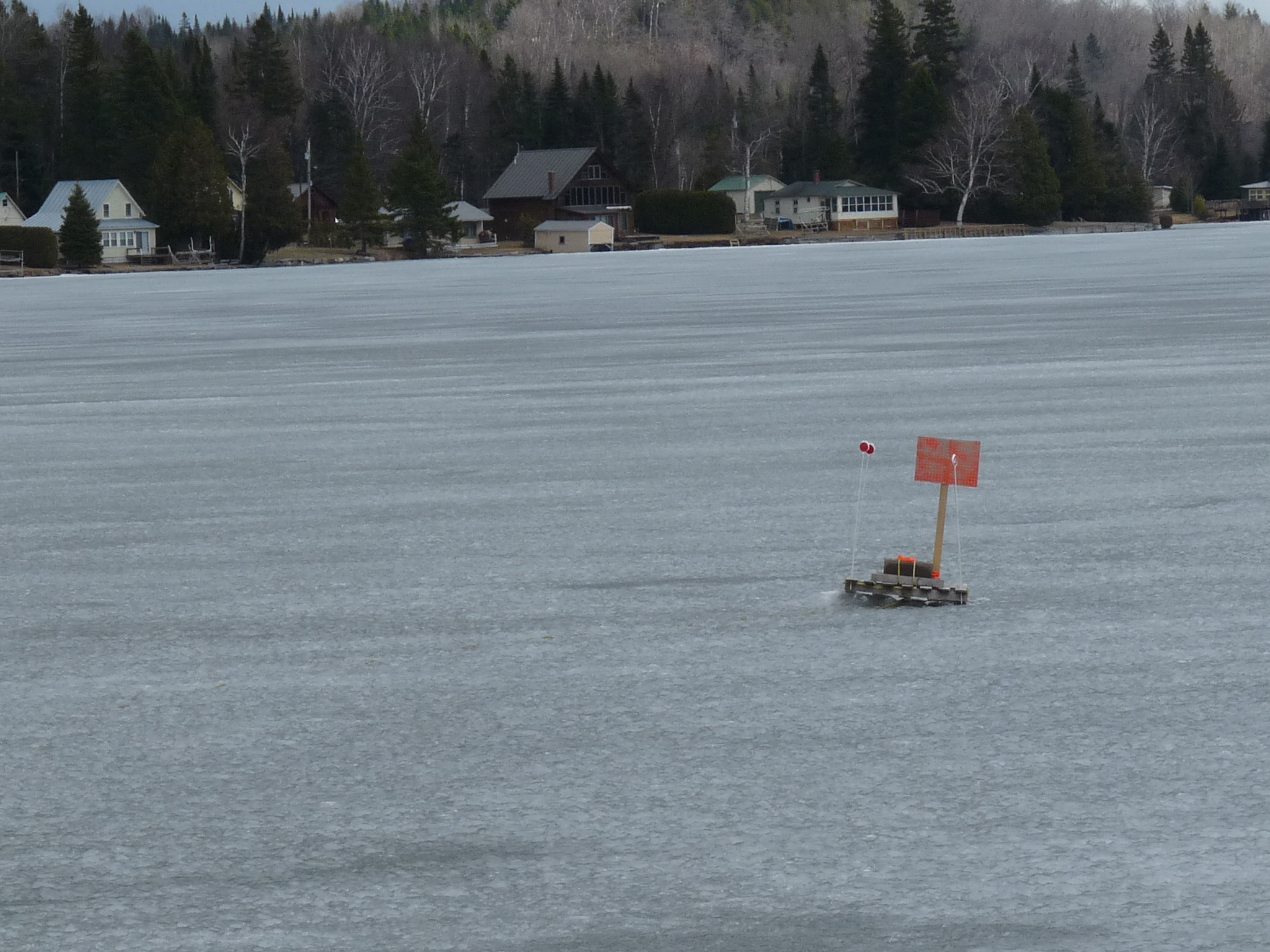 The flag in the center of Joe’s Pond (photo: Jane and Fred Brown)

FRED BROWN: My role mainly is really to help my wife, and in addition to that, I’m the webmaster for the Joe’s Pond Association. 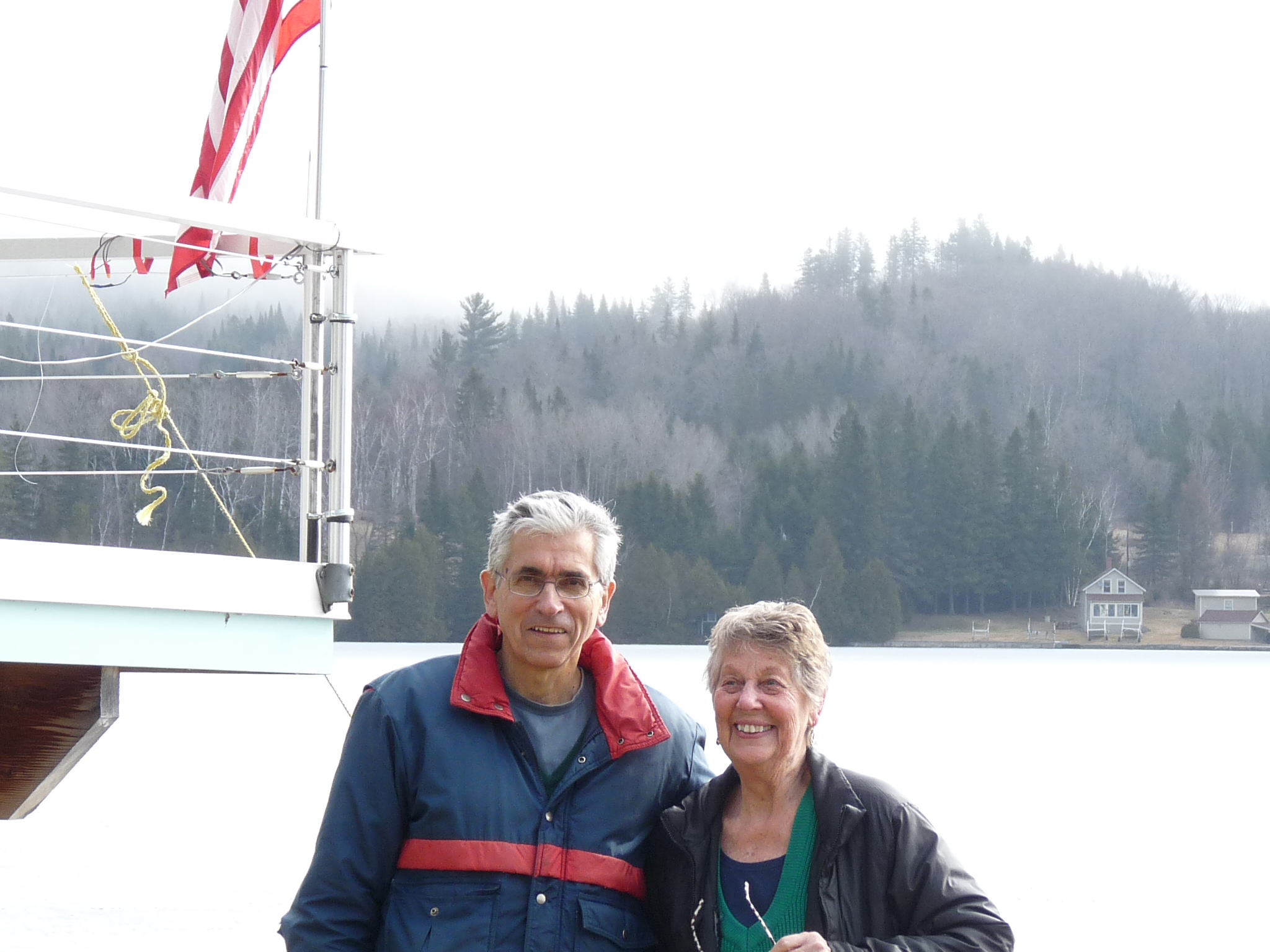 FITZGERALD: He takes me to the shore where the dark ice stretches to the opposite bank. It’s a balmy 65 degrees, but it’s still frozen. The only open water is right at the edge, where a fountain shaped like an otter spits water into the pond.

FITZGERALD: Fred points out the red flag sticking up from a cinder block about a hundred yards out. Then we head back to the deck of a small house, where the official Ice Out clock is set up. 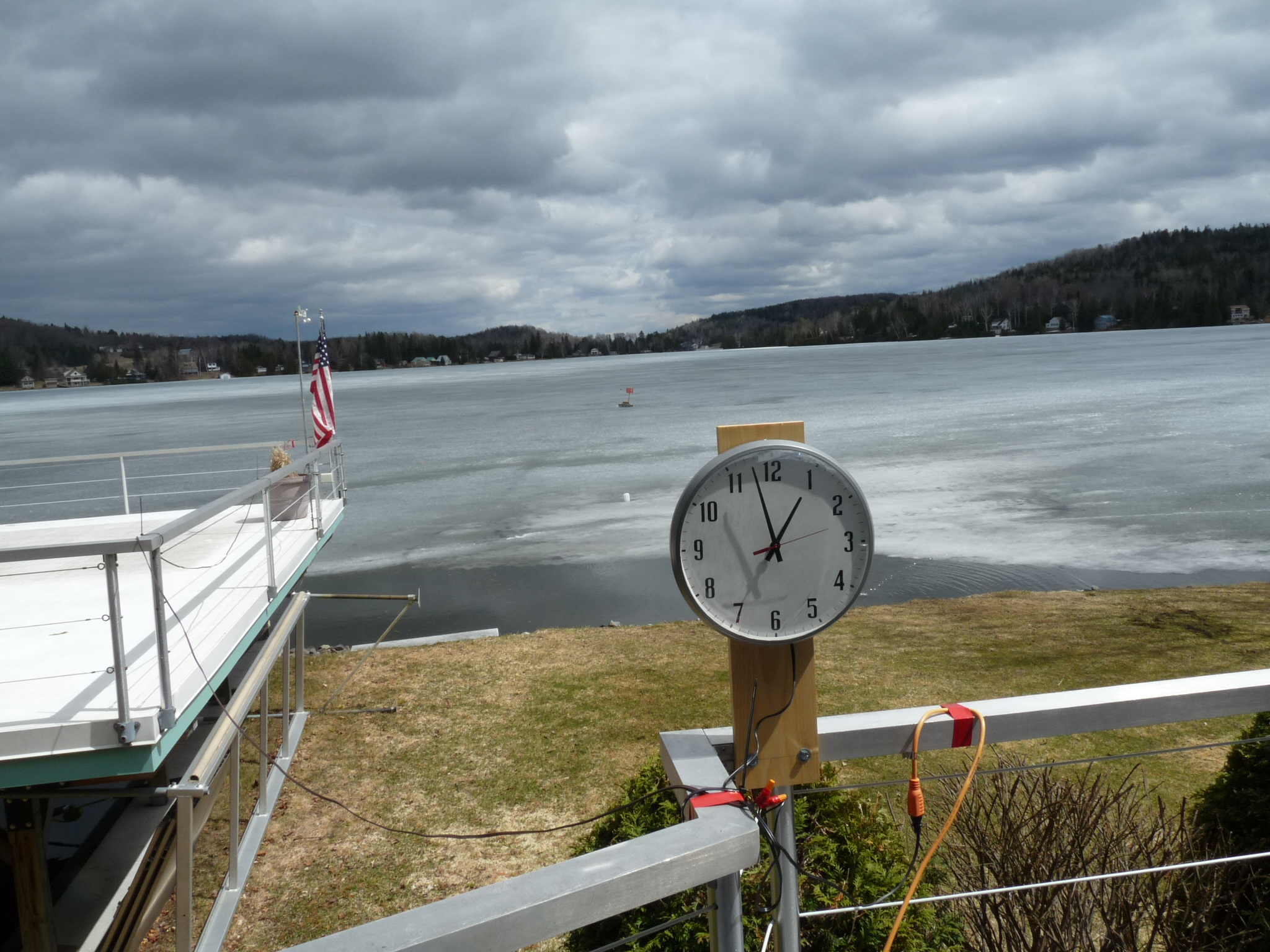 The official Ice Out clock (photo: Jane and Fred Brown)

FRED BROWN: Actually this is a new clock this year, also. It’s a weather-proof clock.

FITZGERALD: A series of wires connect the clock to a rope that runs all the way out to the flag.

FRED BROWN: You see the wires coming from the clock, down to the other deck and out to the flag.

FITZGERALD: When the flag breaks through into the lake, or floats away on a loose chunk of ice, the rope goes taut.

FRED BROWN: When that connection down there is pulled, this clock will stop, so that will be the official ice out time.

FITZGERALD: The rules of the Joe’s Pond Ice Out have been in place since a man named Jules Chatot started the contest in 1988. Chatot and his friends would come out to the pond during the winter for beer and cards. 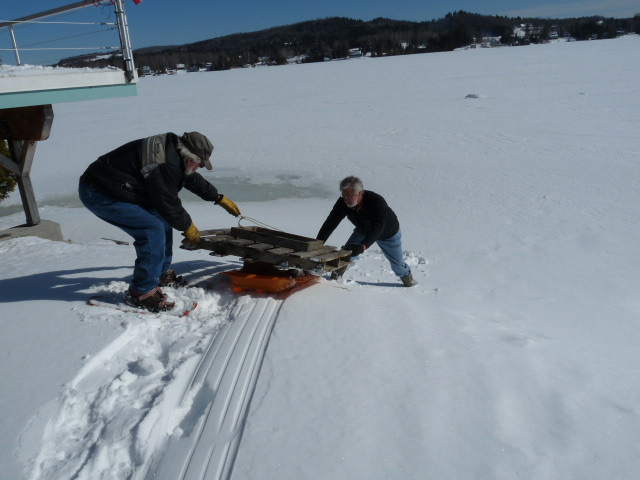 You need snow shoes to get across Joe’s Pond in the winter (photo: Jane and Fred Brown)

FRED BROWN: Probably they had a little cabin fever and so they just started saying ‘let’s guess what time the ice will go out’. It spread from then and pretty soon they started having tickets in the stores and here we are today.

FITZGERALD: The place that sells the most Ice Out tickets today is the Hastings Store in West Danville. A wooden sign on the front porch reads “Ice Out Tickets Sold Here” in painted red letters. It’s squeezed next to the Joe’s Pond Craft Shop, and doubles as the town’s only post office. The Hastings Store is the hub of this one street downtown. 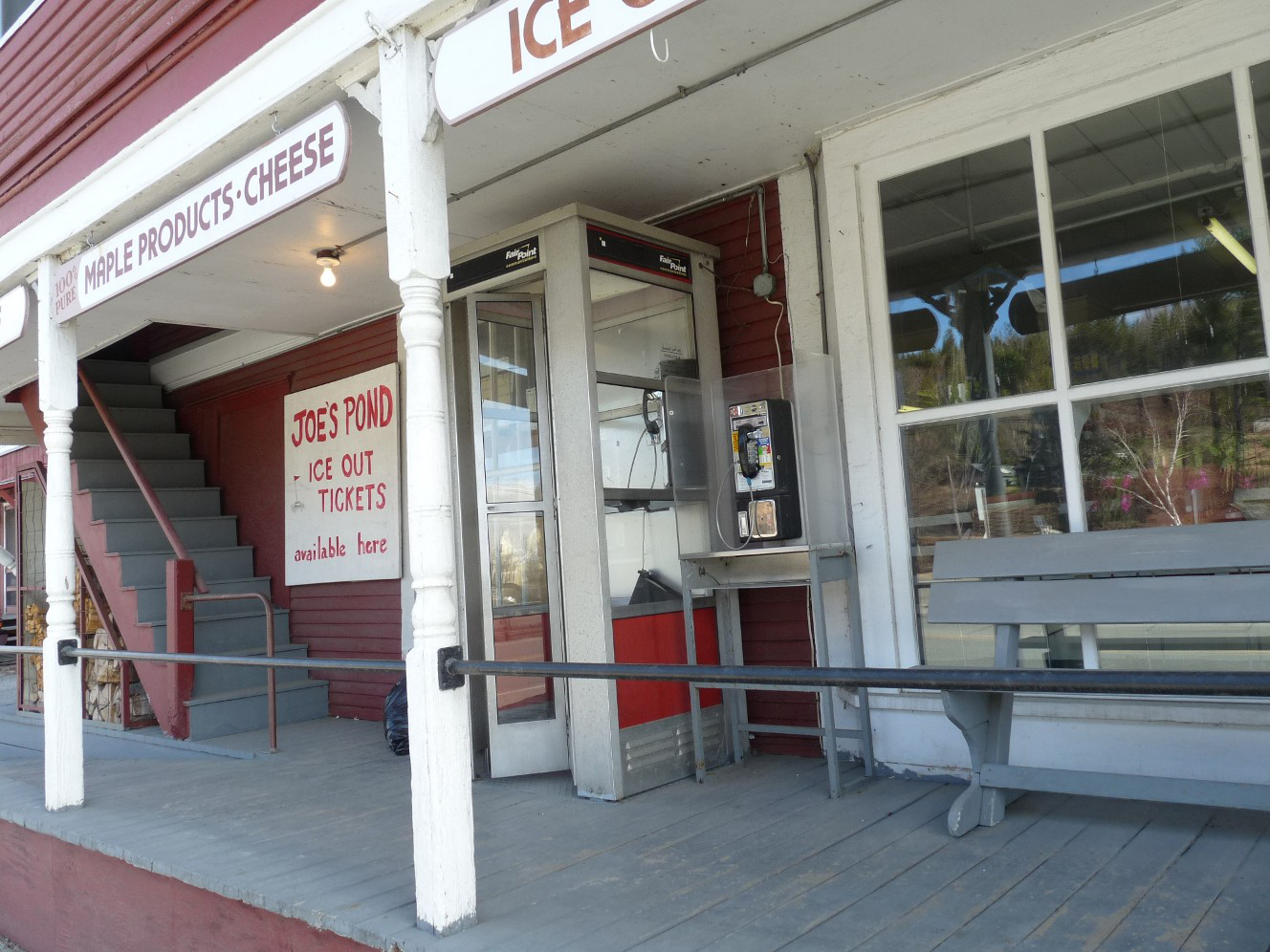 Hastings Store in West Danville, where many Ice Out tickets are sold (photo: Jane and Fred Brown)

FITZGERALD: Hastings looks like what is, an old fashioned family business.

FITZGERALD: That’s Jane Larabee, formerly Jane Hastings. She says that her family has been tracking the ice for generations. Before the contest got going, her father and a friend of his would bet on whether the ice would go out before May 1.

LARABEE: And they’d bet a dollar, and they would tack that dollar to the ceiling. Right about there. Then whoever would win would let it ride to the next year so we had those two dollars stuck to the ceiling for years.

FITZGERALD: Jane and her husband have sold over 1,000 Ice Out tickets at the Hastings Store this year. Most of these go to locals, but the Joe’s Pond Ice contest has begun to go global. 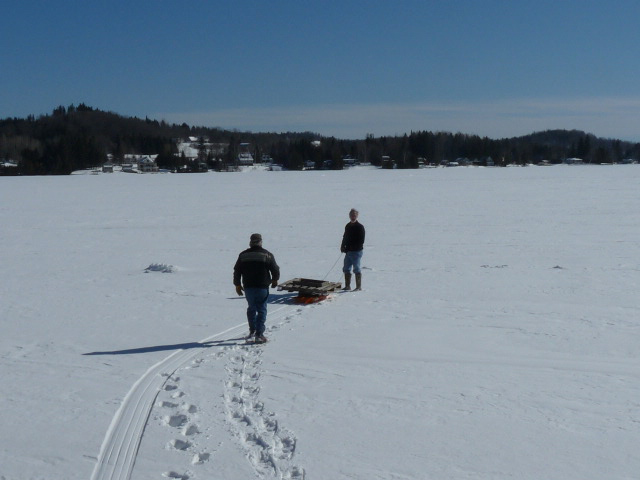 LARABEE: I did sell a ticket one fall foliage and in May I got a phone call, and I said, where are you calling from and he said, “South Africa”. So you know, we’re known far and wide!

FITZGERALD: Jane shows me one of the tickets. It has the dates of the last three Ice Outs on it, but that’s all the help you’re going to get. She says her customers have some unique ways of making predictions.

LARABEE: It’s birthdays, anniversaries, lucky numbers. Sometimes we have the dowsers come in and they’ll dowse with a pendulum over a calendar. You know it’s just one of those things. Whatever floats their boat.

FITZGERALD: These days, competitors have a new variable to contend with—global warming. Over the past few years, Vermont winters have been getting milder, and the Ice Out times are creeping up the calendar. In 2010, the ice went out on the earliest date on record, April 5.

LARABEE: That’s was the year that had 3 or 4 days of 80 degree weather, that’s very unusual. In fact, my husband sold that ticket and he told the fellow it's never gone out that early, and the fellow said, well it’s just a donation then. Guy won $5,000.

FITZGERALD: But this winter has been cold, and Jane’s hoping the ice will hold out until May. Each year she buys one ticket.

FITZGERALD: There’s usually only one Ice Out winner - although there can be ties - but the contest is good for the whole community. It brings Central Vermont a bit of publicity and gives neighbors something to chat about during the winter when they’re picking up their mail at the Hastings Store. And the other half of the money funds the Fourth of July firework display.

LARABEE: If you win the jackpot, fine. But if you don’t, you still get to see the fireworks and they’re reflected off the pond so you actually get to see them twice, which is wonderful.

FITZGERALD: When the ice melts, the process begins all over again. Hastings never has to take the sign down because they start selling tickets for the following year right after the winner has been announced. 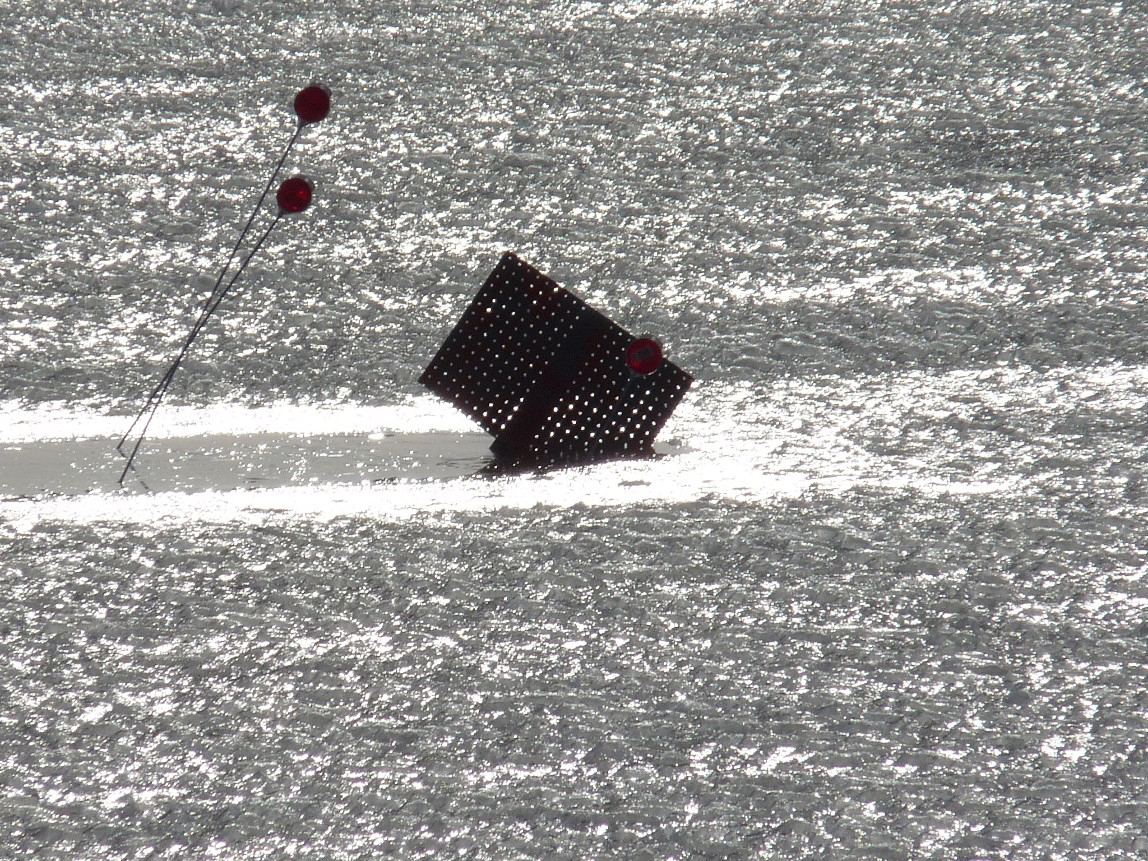 This year, the flag went through the ice on April 23rd, but the clock didn’t officially stop until April 24th at 8:46 AM because the rope had frozen into the ice. (photo: Jane and Fred Brown)

LARABEE: Could I interest you in a ticket?

FITZGERALD: For next year?

LARABEE: Just as soon as the ice goes out they print new ones.

FITZGERALD: Well I’ll stop by next time I’m in Montpelier.

LARABEE: You do that. And we’ll be sure to get you a nice fresh one.

FITZGERALD: On April 24, we got word that the clock had stopped at precisely 8:46am, when the flag finally fell through the ice. The winner of the 2013 Ice Out is Gary Clark of Barre, Vermont. I called him up. Congratulations, Gary!

CLARK: Thank you very much. I’m still in shock. Time to come down off the cloud and move on I guess.

FITZGERALD: How did you make your guess? What kind of methods did you use to make your prediction?

CLARK: I’ve been playing the last few years and this year I decided to splurge and bought thirty tickets. And I decided to work backward from May 1 picking a time in each day. So that’s about my scientific procedure.

FITZGERALD: So you cast a wide net?

FITZGERALD: Now, Gary, if you don’t mind my asking, how much is the purse?

FITZGERALD: And what are you going to do with the money?

CLARK: Oh, probably donate some of it. I’m not quite sure. My wife knows about it so she’s entitled to some of it.

FITZGERALD: Thanks for joining us Gary.

CLARK: Thank you very much.

FITZGERALD: So Gary won $5,000 dollars. Maybe I will buy a ticket for next year! For Living on Earth, I’m Emmett FitzGerald.