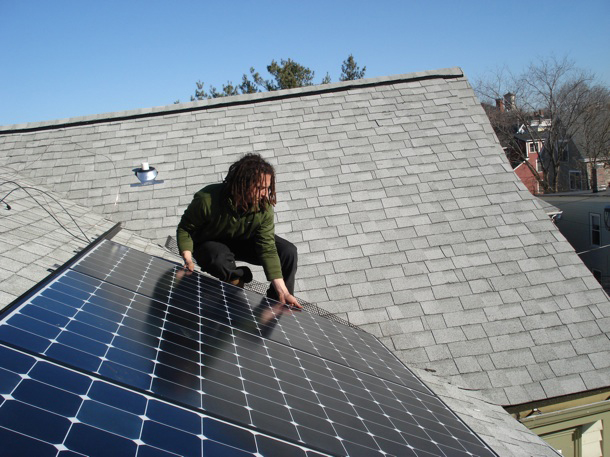 Thanks to incentives and growing awareness, solar panels are becoming increasingly popular across the country. Living on Earth's Helen Palmer had an array assembled on her roof last year, and in this update she tells host Steve Curwood that, among other benefits, the panels have eliminated her electricity bills.

CURWOOD: We've been bring you updates on some of our stories these last few weeks - and one I've been curious about is the piece one of our team, Helen Palmer, put together about her quest with her downstairs neighbor Eric Grunebaum to get solar panels on their two family house. One thing that influenced them was the slew of tempting cash incentives available. Here's part of her report from last year. 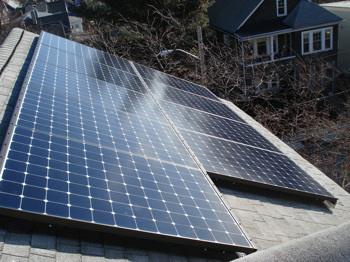 The finished solar array at the front.

PALMER: Federal and local incentives have helped give solar a gigantic boost in the last couple of years. In 2011, the U.S. added 1.7 gigawatts of solar - enough to power about one and a half million homes. California leads the sun-powered pack - but Massachusetts ties Hawaii for second place in terms of incentives and strength of the market. Richard Sullivan is Massachusetts' Secretary of Energy and Environmental Affairs.

SULLIVAN: Right now there are great incentives there's certainly at the federal level there's tax credits, there are here locally in Massachusetts and the cost of manufacturing solar, the cost of installing solar has also dramatically come down. 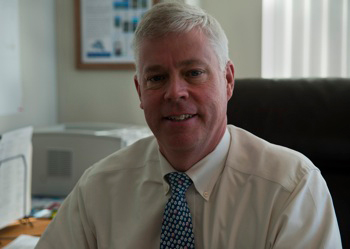 PALMER: Meantime my neighbor Eric was researching what those incentives and new efficiencies added up to in hard cash - he came upstairs.

PALMER: Hi, Eric. He had an armful of folders...

GRUNEBAUM: So I got a price from so far from one company called Sun Bug...total price is $13,000...but then there are these credits you get from the state and federal government...the state credits are adding up to $3,300 roughly and the federal tax credit is $3000. Oh look, there's another state credit of $1,000 so the cost after all the rebates is $6,000. So it's actually cutting more than half off the price…

PALMER: There are dozens of tax benefits, grant programs and incentives to go energy green - 38 states have property tax breaks - 28 states have sales tax incentives - the list goes on. But this was the first time I learned about one of the biggest boondoggles of all - the cash you actually get paid. 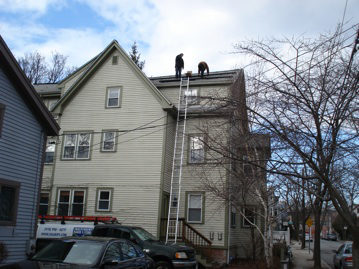 Solar engineers up on the roof.

GRUNEBAUM: Every year, for every 1,000 kilowatts you produce, you get what's called a solar renewable energy credit, which everyone calls SREC, because it's too long to say that other thing. And it’s because utilities are required to buy solar energy.

PALMER: Yes, there's a requirement that the state generate so much from renewables, right?

PALMER: Thirty states have mandatory Renewable Portfolio Standards - in most cases the green energy requirement goes up every year - Massachusetts demands 15 percent by 2020. And SREC prices vary from state to state - Pennsylvania paid less than $22 in June this year - while the Massachusetts price was $545. And the tax credits may go down. The federal credit is good through 2016, but state Energy Secretary Rick Sullivan says Massachusetts' credits will sunset.

SULLIVAN: These rebates and incentives are really designed to encourage the growth of the industry - but over time they will decline will eventually go away - and we're seeing that happen - we've seen the rebate offered go down I believe it's four times - again the goal is to get it to be zero and have private industry be competitive, the solar industry be competitive with the other sources of energy. 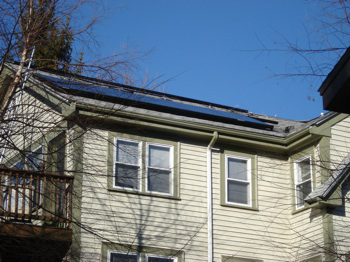 Half the panels up on the back of the house.

PALMER: To date, they've done their job; prices dropped over 40 percent in the last four years and in Massachusetts, at least 200 solar companies are trying to persuade businesses and homeowners to slap solar panels on the roof.

CURWOOD: Well, it's been just over a year since Helen slapped her panels on the roof and got them turned on - and now she's here in the studio for an update. Hey, Helen, how did that work out?

PALMER: Well, we can look. We can open up the laptop here. You remember my solar dashboard? 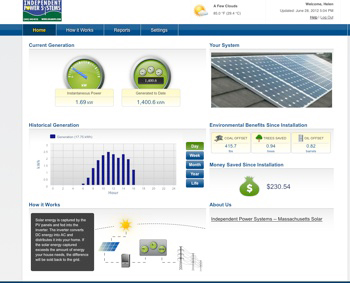 CURWOOD: How could I forget? I think you’re kind of obsessed with this thing.

PALMER: I was, but it’s a bit better now. Look, you can see that I’m generating at the moment 2.82 kilowatts of power. It’s a sunny day - middle of the day. And overall, in the year, I’ve generated 4,683 kilowatt-hours altogether. That offsets 1,389 pounds of coal.

CURWOOD: That’s like a half a ton or more of coal.

PALMER: A half a ton of coal. Wow. And it’s also, what it’s actually saved in electricity costs is $770.

CURWOOD: And what have we got in terms of the electric bill?

PALMER: Ha! No electric bill. Not one since March 2012. And actually I just checked - we have a credit of $42.61 - so actually I think they've worked out pretty well.

CURWOOD: And what about those renewable energy credit payments for doing the solar stuff you that were expecting?

PALMER: Yes, don't rub it in. I think what happened is we kind of caught a wave - the incentives that persuaded us to go solar persuaded thousands of other Americans too. Actually, in 2012 the US added 3 and a third GIGA-watts of solar power - that's twice as much as they put on their roofs the year before and nearly as much as the nation's largest nuclear plant can generate. So the price of the renewable energy credits dropped, as the market was flooded with folks generating clean power, the price per megawatt in Massachusetts slumped to $200. But still, in Pennsylvania, it was only $10. So, it’s not so bad.

CURWOOD: But what about the basic incentives and rebates? They still there?

PALMER: Yes, both nationally, and here in the Bay State, there's a special program called "Solarize Massachusetts.” That has lots of incentives and the Governor, Deval Patrick, he just announced a new goal of 1600 megawatts on roofs by 2020 - we blew through the last goal of 250 megawatts four years early.

CURWOOD: How unique is Massachusetts with all this?

PALMER: Not actually as unique as all that. It’s a very good set of programs, but actually most states have them. They have all sorts of grants, loans, property tax and sales tax breaks, lots of ways to persuade us all to go for green power.

CURWOOD: And Helen, before you go, I’ve got to ask you something else. You are our resident bee-keeper.

PALMER: Not at the moment because my bees died over the winter.

CURWOOD: In fact, that’s what I wanted to ask you. There's another update on another story we've been following - bees and the neo-nicotinoid pesticides - and those chemicals are suspected of being one cause of the massive die-off of honeybees.

PALMER: Yes, and the real new development is that in the European Union, where campaigners have been very vocal about the dangers of these systemic pesticides, 15 of the 27 EU member countries voted to impose a ban on three of the main ones. It's only limited - it’s just a two year ban on their use on flowering crops that attract bees. But campaigners and bee-keepers are very pleased and what they hope this will give bees a chance to recover, and also demonstrate that important pollinators are healthier when these pesticides aren't being used. And also, I mean, most importantly, that crop yield doesn't slump because of the ban.

CURWOOD: OK, Helen. Well, keep things buzzing for us will you.

PALMER: Well, I am getting some new bees!


Listen to the Original Story

Computer plan of two solar systems on our house, separated by the dormer.

The "very efficient" panels installed on our roof.

A summary of incentives state by state