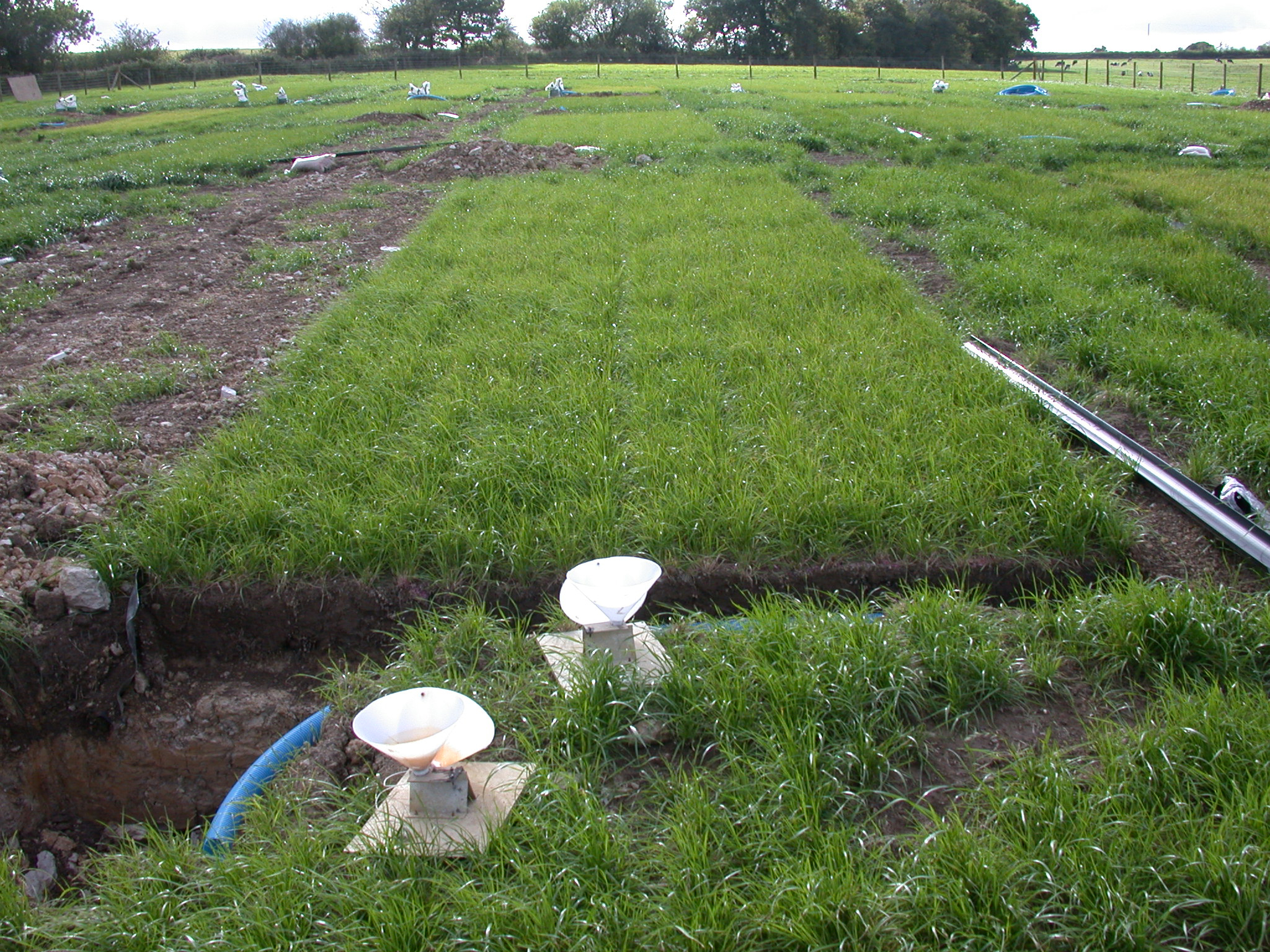 The rainfall-runoff plots were engineered so the scientists could collect the rainfall that moved laterally along the soil above and near the surface. There is little opportunity for water to percolate deep into the soil (photo: Kit Macleod)

As the atmosphere heats up, flooding is on the rise throughout the world. Kit Macleod, a scientist at the James Hutton Institute in Scotland, joins host Steve Curwood to discuss a new hybrid grass his team helped breed. It restructures soil to reduce runoff from pastures and could help cope with global warming.

CURWOOD: Now, if we're to cope with the increased rainfall and flooding of a warming climate, we'll need all the skills of our scientists. So, at the James Hutton Institute in Scotland, they've come up with one novel solution - a hybrid grass that could reduce runoff from pastures in much of the world. Kit Macleod is one of the researchers at the Hutton Institute, and he joins us now from near Aberdeen. Welcome to Living on Earth. 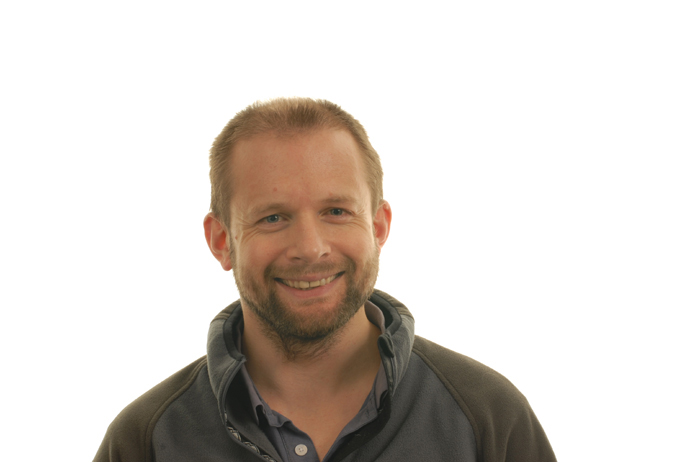 CURWOOD: So what exactly is this grass called, and what does it look like?

MACLEOD: Well, this grass is a hybrid between two grasses that are widely grown in the UK and other areas. The grass itself, called a festulolium, because one parent is a fescue and the other one is a lolium. It’s a forage grass that’s used in a lot of fields like people’s lawns. So green, maybe 10 centimeters long, depending on how it’s being cut or grazed. And it’s used for rearing cows and sheep primarily.

CURWOOD: By the way, for people who aren’t plant experts, what’s a hybrid?

MACLEOD: A hybrid is where we’ve bred a new sort of grass based on two distinct parent groups using traditional breeding techniques where it brings together traits from both of them.

CURWOOD: It’s not genetic engineering though.

CURWOOD: And the two parent groups are...?

MACLEOD: The perennial rye grass is widely used, the lolium. And then a meadow fescue, which is known not so much for production, but its known for having good rooting and a good sort of environmental stress tolerance.

CURWOOD: Now specifically, how does this work to blunt the effects of flooding?

MACLEOD: Well, in areas where we’ve got a lot of livestock in the UK, we’ve got quite poorly draining soils - clay rich - they’ve got little storage. So when it rains, the water runs off the farmers’ fields quite rapidly. So what we’ve found is that this grass, it certainly reduces the amount of water that was running off the fields. I think that’s due to the grass creating a more loose soil structure - basically more storage, more sponginess in these grass and fields due to the rooting of the grass - and the roots turning over and creating space and the wetting and the drying of the soil.

CURWOOD: So basically, it increases the capacity of the soil to store water then?

CURWOOD: So in your tests, how effective was this hybrid grass in reducing runoff from storms?

MACLEOD: Over a two-year period, when we had our experiment set up at the plot scales basically a patch of grass about 10-meters long to understand those processes. These grasses, for a number of rainfall events, reduced the runoff by 50 percent. 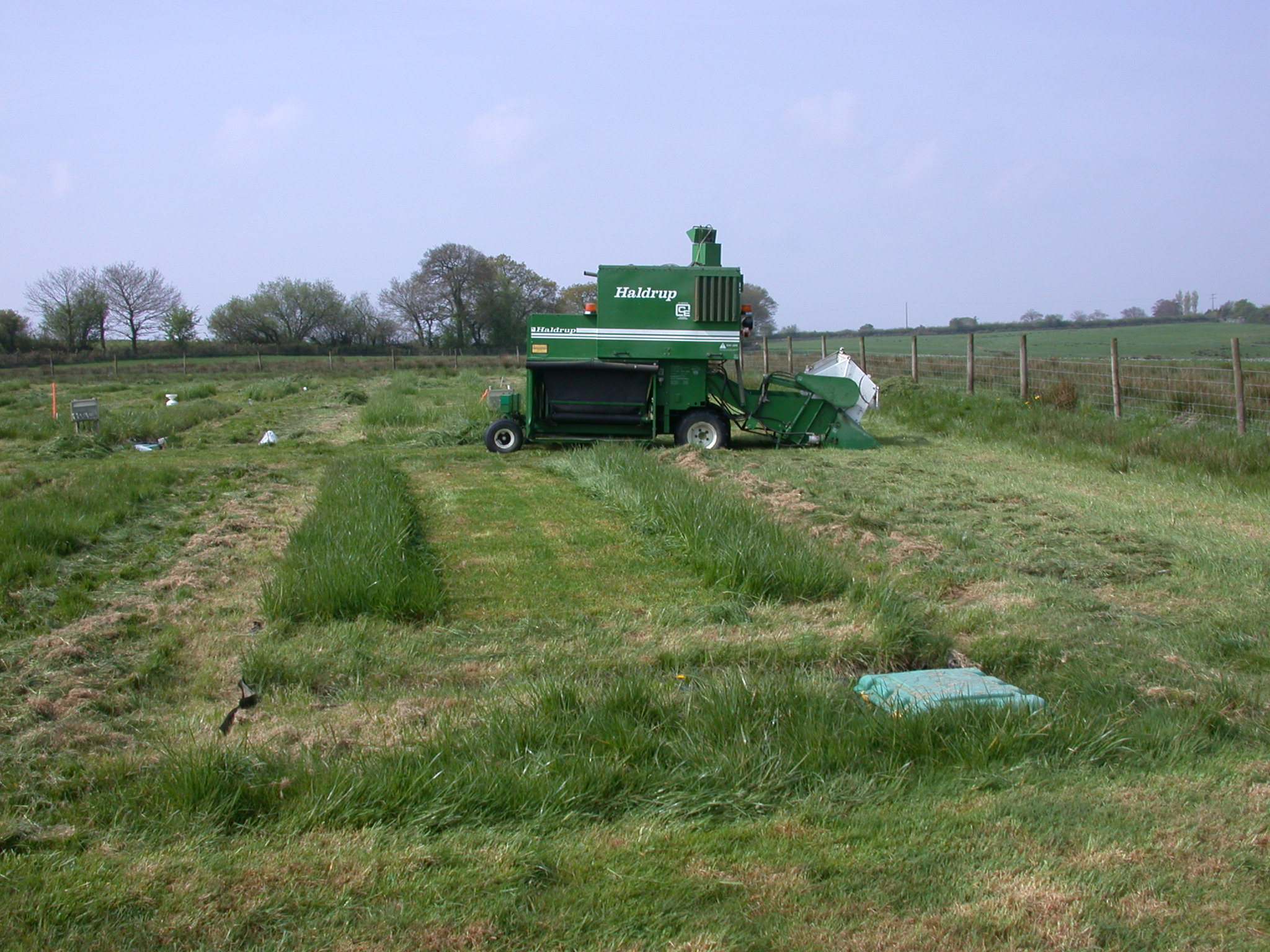 In addition to measuring runoff, the scientists collected data on the productivity of the grass for farming. Here is a picture of the small plot equipment to harvest the grass and weigh it automatically (photo: Kit Macleod)

CURWOOD: So what other uses would this hybrid have?

MACLEOD: Well, that’s one of the real drivers of the project. There’s a lot of interest in multifunctional land use. So it’s not only good for reducing runoff, but also good for production. Measured near the herbage in which it was being produced, it’s on par with the grass so the land is still productive, and providing an income for the farmer, but would also provide this wider environmental benefit.

CURWOOD: So, this isn’t something someone would want to use in the city to improve runoff, I take it.

MACLEOD: Potentially. We haven’t explored that. There’s a lot of interest in rain gardens and sustainable urban drainage systems. There’s potential there. You have the same processes; if you’ve got poorly draining soils, then it could. Then it’s a big issue. Cities like London, large amounts of people’s lawns are being turned into car parking spaces, and that changes how rapidly water moves off of the land into other people’s gardens or into rivers.

CURWOOD: I’m wondering where in the future might we see this grass in pastures around the world?

MACLEOD: Well, mainly, first of all, the seed companies need to carry out their trials and further develop these grasses before they are available to farmers. And the main market would be these sub-temperate areas where Lolium perenne - I’m not sure where it’s grown in North America - but it’s grown widely in the UK, parts of Europe and parts of Australia. Areas of similar bioclimatic conditions.

CURWOOD: How useful do you think your hybrid could be in flooding around the world?

MACLEOD: Well, I think it really depends on the context you’re applying it. We would hope with further research that within a certain grassland setting, that it would make some difference in how much runoff is being produced. Not for extreme events, and an extreme event with a large amount of precipitation, no matter what you do, changing runoff from land use is not going to be the big solution there. But hopefully, and overall, it would help slow the flow of the water coming down the catch basins. There’s a lot of interest in that at the moment.

CURWOOD: Kit, how comfy is it? Is it like lush? Would I want to lie down on it on a nice hot summer day with a good book? Or is it kind of spiky and scratchy? 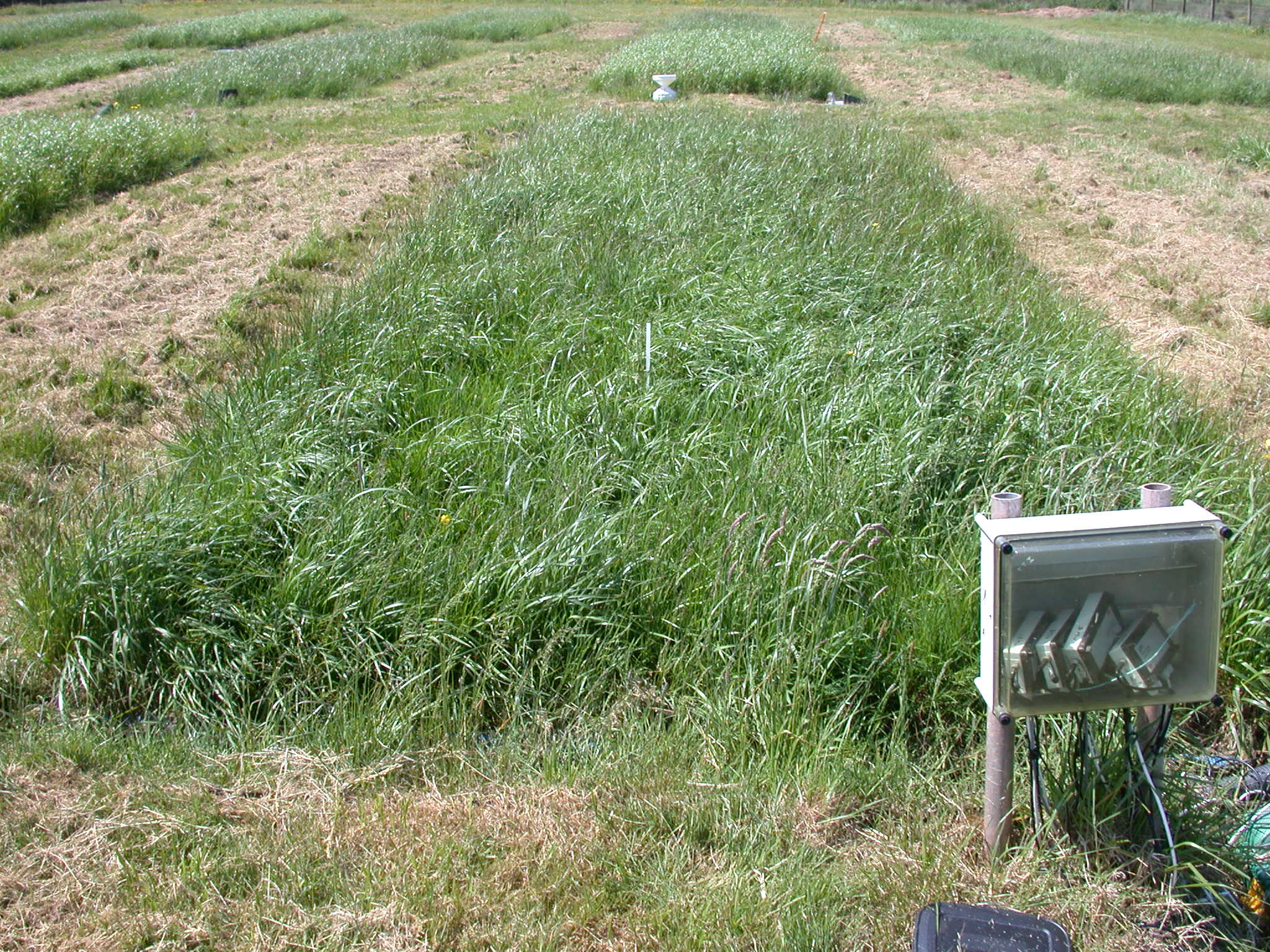 The grass plots were grown from 2006 to 2009 and instrumented to automatically to measure the rainfall that came from the plots (photo: Kit McLeod)

MACLEOD: Oh, it’s lovely and lush. You know, sitting under a tree in the English countryside watching some baby walk past; sipping a pint of cider. It’s perfect for that.

CURWOOD: Kit Macleod is a scientist at the James Hutton Institute in Scotland. Thanks so much for joining us.

MACLEOD: Thank you very much.