Legal Battle Over Drilling Pollution in the Amazon 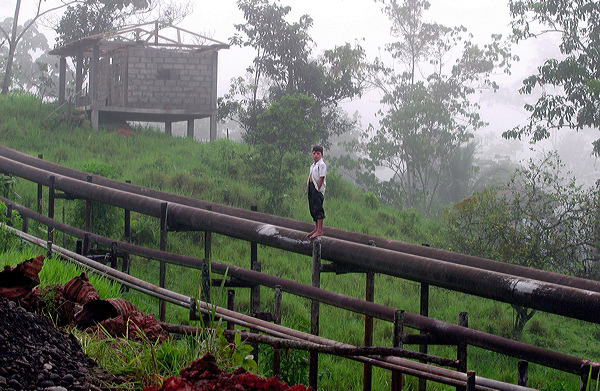 A boy stands on an oil pipeline in the Ecuadorian Amazon near the town of Lago Agrio. (Lou Dematteis and Kayana Szymczak)

In a case that dates back two decades indigenous groups and subsistence farmers successfully sued oil giant Texaco (now merged with Chevron) for polluting an area the size of Rhode Island in the Ecuadorian Amazon. Chevron media advisor, Jim Craig, claims the trial was a fraud and the company shouldn’t have to pay the $19 billion awarded as damages. So Juan Pablo Saenz, a lawyer for the plaintiffs, says they are now going after Chevron’s assets in countries other than Ecuador. Both guests explain their positions to host Steve Curwood.

CURWOOD: Meanwhile, at its recent annual meeting, the oil giant Chevron was once again pressured by nearly a third of its shareholders regarding widespread contamination of water and soil in Ecuador that dates back to the 1960s. Texaco drilled in Ecuador, then later merged with Chevron. After more than 20 years of litigation, the combined company has been ordered to pay $19 billion in damages. Chevron claims it has been unfairly treated and has refused to pay, so the plaintiffs are going after Chevron assets in other countries including Argentina. Juan Pablo Saenz is an Ecuadorian lawyer for the plaintiffs. He says the area contaminated by the drilling decades ago is still unsafe and unpleasant for the people living there. 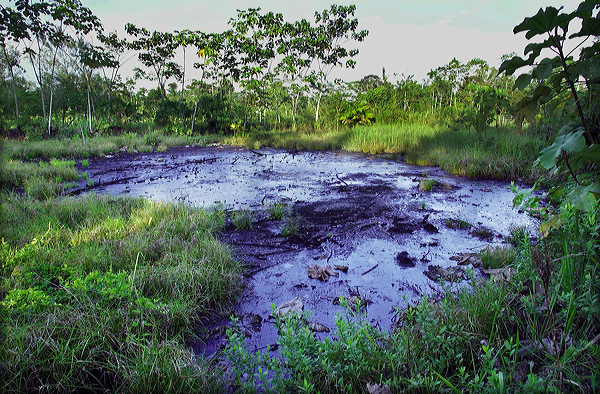 A local woman walks out of a cemetery where her father, brother and sister are buried. All of them died of cancer. (Lou Dematteis)

SAENZ: Well, it smells just like a gas station. Previously where you would have rivers and lakes where indigenous groups would fish - now they’re devoid of any animal life. Those indigenous groups now they need to eat canned tuna and stuff like that. There’s this thing that oil companies used to do. They used to pour oil on the dirt roads - I don’t know exactly what their justification for that is - and it’s these roads that people have to walk back and forth to work every day. And you hear stories all the time that they were walking those roads in flipflops and they would get stuck to the road so they would have to walk barefoot. It’s just all those little things that explains it’s important how pervasive all this...living in this area was, and how pervasive the oil problem is through the area.

CURWOOD: How large is the area that’s affected?

SAENZ: It’s contained within two provinces in northern Ecuadorian Amazon rainforest about the size of the state of Rhode Island. 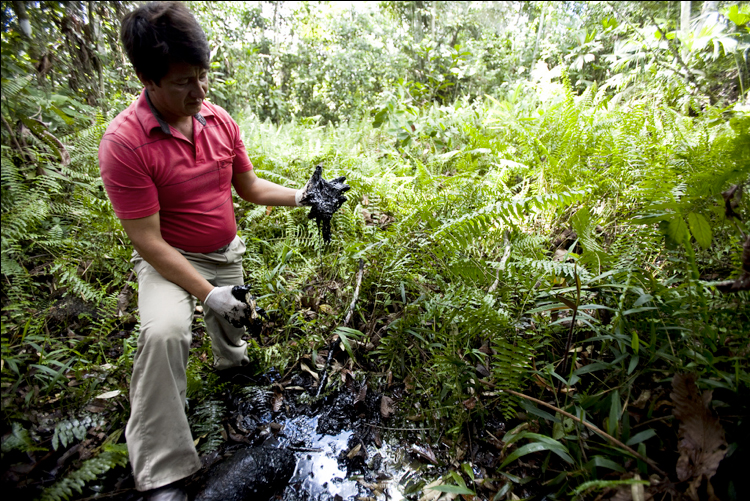 CURWOOD: And how much oil was spilled there?

SAENZ: Actually what caused the most damage to the area were about 16 billion gallons of toxic produced water that were pumped directly to the waterways, and that were pumped directly to the rivers. Also, you have there about 1,000 open air pits - they just dug them directly into the soil with no lining so actually there was ways for contaminants that managed to flow into nature and from them into animals and then into human beings. 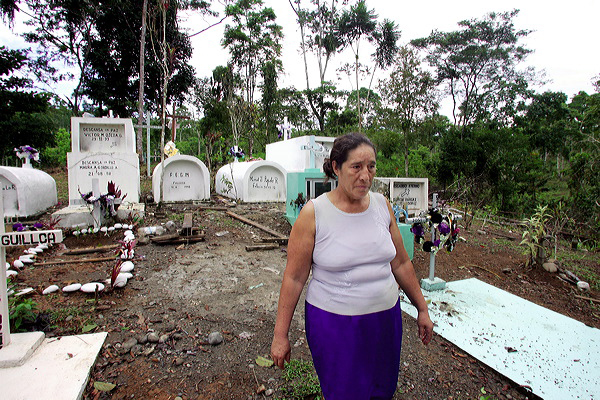 An unlined oil pit in the Ecuadorian Amazon. (Lou Dematteis and Kayana Szymczak)

CURWOOD: Now the residents in the area say they have a lot of health problems associated with with living with toxicity of the oil-related water pollution. Tell me about that please.

SAENZ: That’s probably the hardest part about all this - just the human suffering. Cancer rates are 150 percent higher than one would expect from this sort of environment. There’s a lot of child leukemia. There’s a lot of ovary cancers and general reproductive health problems for women, miscarriages. This is made worse because these people have no access to real healthcare. They don’t have access to clean drinking water, you know? 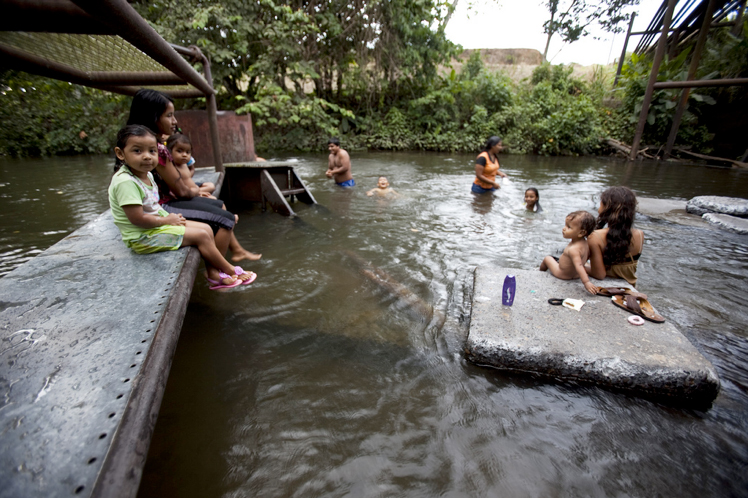 Residents in the affected area still use the contaminated river for swimming and drinking water. (Rainforest Action Network)

CURWOOD: How did this area get to be so pollluted? I mean, drilling for oil can result in occasional spills, but this sounds far more reaching than a spill or two.

SAENZ: This was designed to pollute. When Texaco - that’s Chevron’s predecessor - when Texaco came into Ecuador they promised that they could extract the cheapest oil barrel in the world. And that’s precisely what they did. How they did that was designing this operation with utter disregard for human life and only considering maximizing economic gains. When they had technology, for instance, to reinject some of the toxics to levels where they wouldn’t do any harm to nature or to human life, they just made a cost-benefit analysis and they simply chose not to. 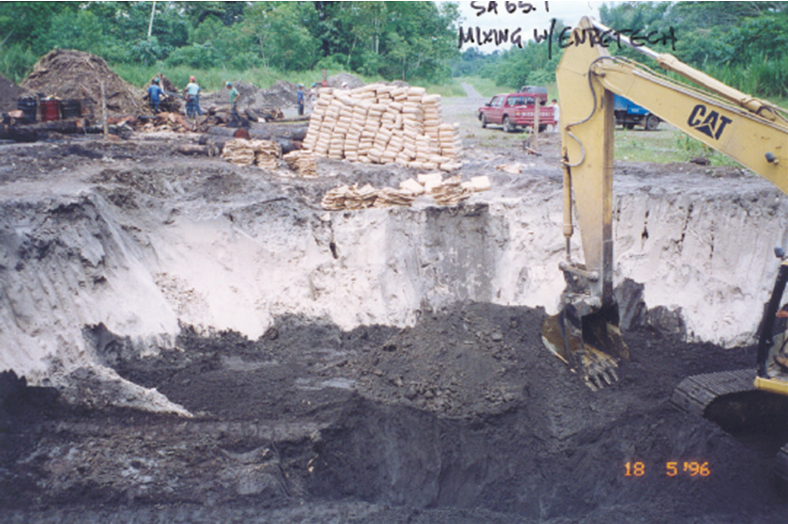 A photograph of Texaco’s work to remediate oil contamination in an open pit. (Chevron Corporation)

CURWOOD: Just remind us of how Chevron got into this case, because it was filed 20 years ago against Texaco.

SAENZ: Sure. Texaco basically merged with Chevron between 2001 and 2002. Basically what they did was they got merged. At the beginning it was called Chevron-Texaco company but once they figured out that didn’t look good for Chevron because of Texaco’s previous environmental record, they just dropped the Texaco portion altogether. They’re hiding behind lots of subsidiaries, lots of complicated structures to try and hide responsibility, to try and hide behind a corporate veil.

CURWOOD: So this case has been going on a long time. Just what exactly happened here? 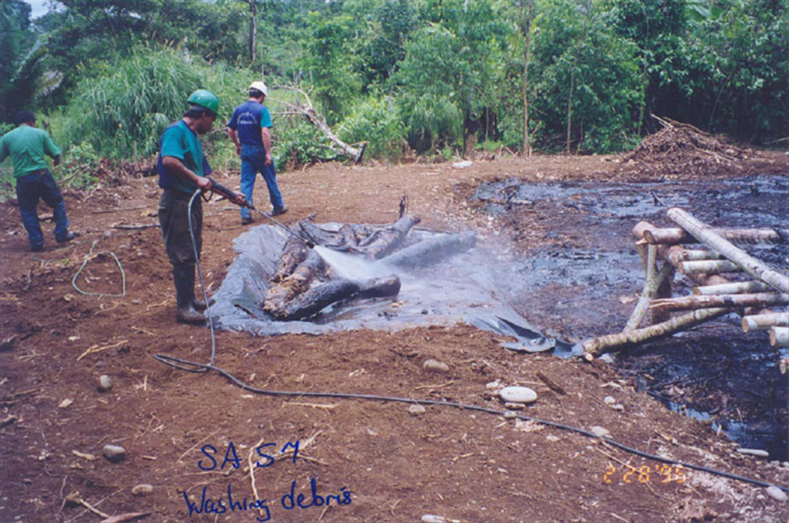 SAENZ: At first, we filed suit in New York originally - the federal courts in New York. Chevron fought us for ten years arguing that it was the Ecuadorian courts that were supposed to handle this case. The court actually agreed to do that, but made them promise that Chevron would abide to any decision coming from the Ecuadorian courts. So we go back to Ecuador because back then Chevron was real chummy and had a big influence with the government, and they thought that this would get resolved over a game of golf. So we come back to Ecuador, we spend ten years litigating. We win the trial. We win on appeals, but right now they are refusing to pay. And that forces us to basically make a list of countries where Chevron holds assets because they do not in Ecuador. And right now we’re in the process of trying to collect the damages in other jurisdictions.

CURWOOD: Have any of these other nations taken action on your request?

SAENZ: Yes, for instance in Argentina, we asked there for the assets to be frozen and they did it. This money that normally flows from Chevron’s Argentinian’s subsidiaries to Chevron’s headquarters in the U.S. - all that money is set aside in an escrow account.

CURWOOD: So what’s next in this case? We will keep on vigorously fighting and defending these actions in Canada and Brazil and Argentina. We will be starting new enforcement actions in other jurisdictions, but what’s coming soon is that hopefully we will be able to start with the remediation of the Ecuadorian Amazon rainforest. And that cannot happen soon enough.

CURWOOD: Juan Pablo Saenz is an Ecuadorian lawyer in Quito representing the plaintiffs in the Chevron-Texaco case. Thank you so much.

SAENZ: Thank you, Steve, it was a pleasure.

CURWOOD: To hear Chevron's side of the story we called up Jim Craig. He's a media advisor for the Chevron corporation.

CRAIG: The plaintiffs’ lawyers in the case bribed, defrauded, and colluded their way to a $19 billion judgment against Chevron in Ecuador. There’s no reason why one would have to accept a judgement based on this sort of corruption and wrongdoing.

CURWOOD: What about the substance of the disagreement here? In your view, is Texaco responsible in any way for the pollution that has been observed in the area in question?

CRAIG: No, any pollution or contamination that may exist today is not the responsibility of Texaco. Texaco did a complete remediation in the 1990s. It received a release from the Ecuadorian government and the Ecuadorian state oil company PetroEcuador, who was Texaco’s majority partner at the time. The company that didn’t do their share of remediation was PetroEcuador. PetroEcuador agreed to and had an obligation under contract and the law to remediate its two-thirds share of any impacted site. They didn’t do so for almost two decades. They operated exclusively for 23 years with what everyone agrees is an abysmal environmental record. So if there’s any contamination today in the Amazon of Ecuador, it’s the responsibility of PetroEcuador.

CURWOOD: So you agree then that there were...there was a whole lot of pollution in that area?

CRAIG: I didn’t say that.

CURWOOD: Well, do you say that there wasn’t pollution in that area?

CRAIG: There were identified...a certain number of sites that needed remediation, but there isn’t the massive contamination that the plainiffs have continually insisted that there is. Texaco had an obligation to remediate it’s one-third share of sites. Those were identified in an audit and were the basis of an agreement which required Texaco to conduct its remediation.

CURWOOD: Has Texaco ever paid any damages to the communities that are the subject of its remediation activities?

CRAIG: Yes, it did. It conducted a remediation program for $40 million which included several million dollars to settle claims by the same communities that the plaintiff’s lawyers claim to represent.

CURWOOD: So Chevron paid how much to the communities?

SAENZ: Again, it wasn’t Chevron. It was Texaco. Six or seven million dollars, I believe.

CURWOOD: So your response to the people there that have health concerns, cancer, miscarriages and such is that take it up with PetroEcuador?

CRAIG: Well, look. I could say something about the health claims that you just mentioned. Official statistics show that the cancer mortality rates in the oil producing region are lower than both the capital Quito and the non-oil producing areas of the Amazon. You know, we have a lot of reason to believe that these supposed cancer claims are false. So again, if people really have claims to bring, they ought to bring them to the only company that’s responsible today for any problems that might exist in that region. That’s PetroEcuador.

CURWOOD: James Craig is a spokesperson for Chevron. Thank you so much for taking the time, Jim.

Chevron on the lawsuit in Ecuador