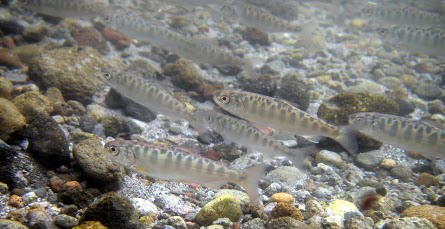 Juvenille Coho Salmon, one of the most endangered fish species in California (photo: Caron Jeffres)

Many of the fish that swim in California’s rivers can be found nowhere else in the world. But as fish biologist Peter Moyle tells host Steve Curwood, some of those unique species may be in trouble and threatened with extinction.

CURWOOD: As summer begins along many US rivers, you'll find anglers patiently contemplating their rods in the flowing water. But researchers say when it comes to California, in the future they may be out of luck if they are looking to hook an indigenous fish. A new study from the University of California at Davis finds that many of California’s unique fish species could go extinct if global warming continues at current rates. Peter Moyle, one of the lead authors on the study, joins us now from UC Davis. Welcome to Living on Earth, Peter.

MOYLE: Thank you very much!

CURWOOD: Now tell me why are freshwater fish particularly vulnerable to climate change? 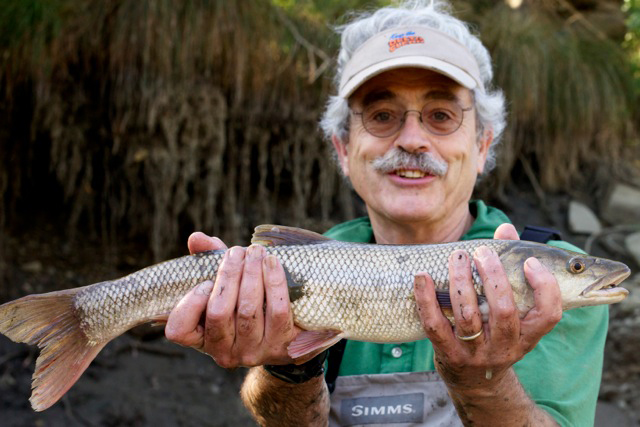 Professor Peter Moyle, holding a Sacramento pikeminnow, one of California’s fish that is not threatened by climate change (photo: Jacob Katz)

MOYLE: Well, freshwater fish don’t have any place to escape climate change is one of the reasons. You know, when you’re in a stream, you can only go upstream so far before you run into a waterfall or something, so if the conditions in that stream change, you’re pretty much stuck. And that’s what’s going on in California and throughout the west especially. Streams are predicted to get a lot warmer, four to six degrees Fahrenheit, especially in late summer. And the stream flows are going to become more variable. So the fish are really going to be stressed as a result of climate change. And this will be a cumulative thing over the next 50 to 100 years.

CURWOOD: So how did you determine the vulnerability of freshwater fish? How do you quantify this?

MOYLE: Well, I’ve done periodic assessments of the California fish fauna - I did one in 1975, one in 1989, one in 1995 and now more recently. And this in turn allowed me - when I wanted to do a climate change assessment - to go through the literature and rate them on 20 different metrics in terms of their vulnerability in climate change. When we scored 121 native fishes and 43 non-native fishes, 82 percent of the native fishes are going to suffer heavily from climate change and many of them to the point where they’ll go extinct. Basically, many of the endangered fishes are already on a downward trajectory because of so many other things going on with California’s water and climate change adds that extra stress. It’s more likely to push them to extinction.

CURWOOD: You’re saying that 80 percent of endemic, that is native, freshwater fish in California, likely to go extinct - or close to extinct - because of what is happening to the climate?

CURWOOD: So talk to me about the fish species that are the most vulnerable, and the ones that were surprises for you as well.

MOYLE: Well, the fish that are most vulnerable are those that require cold water. Those fishes include very distinctive populations and runs of Chinook salmon, Coho salmon, Steelhead trout, as well as species like Delta Smelt and Eulachon. These are the species that require cold water, and many of these rivers are simply going to get too warm for them. 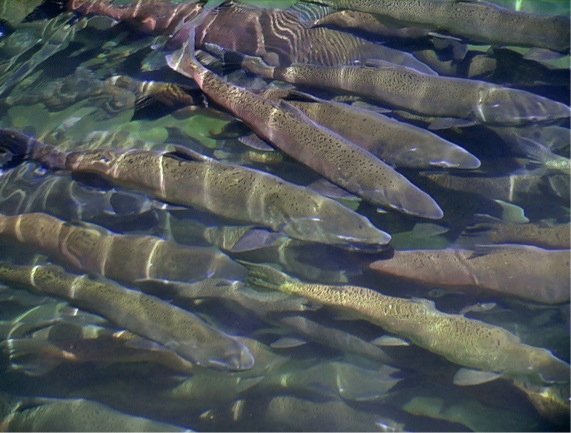 CURWOOD: Now, what about the non-native fish? Your report said they are going to do a lot better. Why?

MOYLE: Well, basically when people...Europeans, I should say, came to California in the 19th century, they decided native California fish fauna wasn’t good enough for them. So they brought in all kinds of non-native fish, especially those that can do well in reservoirs and in really warm water habitats. Because we’ve been essentially changing things in California ever since the Gold Rush and generally creating warmer water habitats anyway. So you’re bring in your catfish, your bass, your carp - species that thrive in warm water environments. And essentially, we’re creating more of those environments with climate change. So these species are just going to thrive and then that provides an additional stress factor on the native fish because there is competition between native and non-native species. So as you make the environment become more favorable for the non-native species, they put additional pressure on the natives and help to accelerate their decline.

CURWOOD: So salmon, Steelhead trout, these are pretty tasty fish. What impact might this have on the California economy?

MOYLE: Well, when you talk about the California economy, you always find that, fisheries, especially for salmon, are a tiny fraction of any economy. We’re not like Washington or Oregon that have a major part of their economy driven by these fisheries. But the important thing is that our fisheries will decline, and to the great distress of the fishermen unless we work hard to reverse the trend.

CURWOOD: What will it do for nature around these streams and lakes to lose these fish?

MOYLE: Well, salmon, of course, are a species which comes up from the ocean in large numbers and die in streams where they’re spawning. This provides a big influx of nutrients for the fish, and for the invertebrates and for everything else around these streams. I did a study once relating what salmon nutrients do to a steam surrounded by vineyards. And we found that not only did local wildlife benefit from salmon, we even got photographs of deer coming to munch on salmon carcasses, what we found was that the vineyards alongside the stream actually incorporated marine nutrients into the leaves of the grapes. The Caspian grapes were partially being fertilized by salmon. So there’s a real benefit in that regard to wildlife and even to farming from having salmon coming upstream.

CURWOOD: So what can we do to save California’s fish?

MOYLE: Well, the biggest single thing you can do in California from a water management point of view is to re-upgrade our dams. We have roughly 1,500 really large dams in the state and another couple thousand that are smaller. Most of these dams do not release enough water below them. The way you release water is you have to maintain your cold water pool in the reservoirs because in reservoirs water stratifies. It flows into the reservoir in the winter when the water’s cold. The cold water sinks to the bottom, and then you get this surface water that’s really warm. But most reservoirs can release water from the bottom. When they do that, you’re releasing the cold water that native fishes like salmon really like. So you have to conserve that cold water and use it specifically for fish as long as you can during the summer months. So we know there’s lots of things we can do. But it takes some fairly sophisticated management of our dams and rivers to make these things happen.

CURWOOD: Peter Moyle is a professor of fish biology at UC Davis. Thanks so much for joining us.