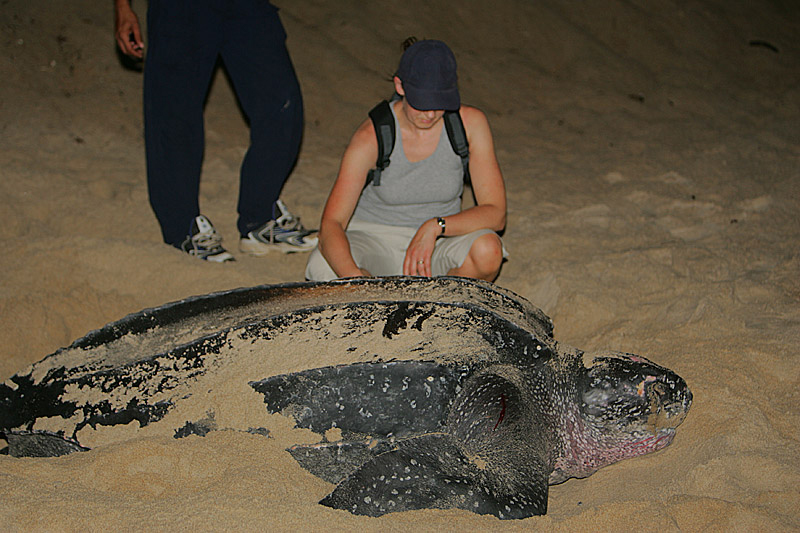 Leatherback sea turtles are the largest species of sea turtle, and are critically endangered. Previously, scientists have taken a small skin sample from female turtles when they come ashore to lay eggs. (Photo: Wikimedia Commons)

CURWOOD: It's summer! Time to celebrate and visit some of the new national parks and monuments in America. But first this note on emerging science from Poncie Rutsch.

RUTSCH: For years, scientists have looked at sea turtles and wondered, “Who’s your daddy?”

Tracing paternity in turtles is tougher than you might think. First, there’s very little research on male turtles - since they don’t lay eggs, they rarely come ashore, and so scientists seldom get a chance to test their DNA.

Second, sea turtles don’t have sex chromosomes, so it’s hard to distinguish mom DNA from dad DNA. Instead, the egg’s temperature during incubation determines whether it will hatch into a male or female. The warmer eggs tend to be female, and since climate change is warming tropical beaches, scientists thought that females probably outnumbered males in the ocean.

Now, sea turtle scientist Peter Dutton knows that that’s not the case. Dutton and his colleagues at NOAA managed to separate out paternal DNA and found that sea turtle populations had much greater genetic diversity than they’d predicted, indicating that sex ratios are most likely evenly balanced. 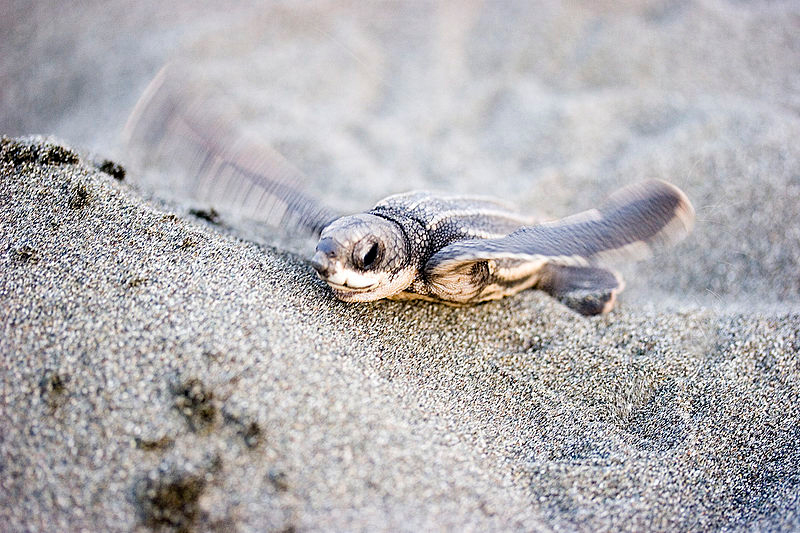 A leatherback turtle hatchling races towards the ocean. Scientists can now use low-impact blood samples from these hatchlings to trace turtle paternity. (Photo: Wikimedia Commons)

Dutton discovered this by eliminating the female mitochondrial DNA from the rest of the turtle’s genetic material. The team’s most recent study focused on critically endangered Leatherback sea turtles, and will help to estimate population size and resilience.

The new discoveries also show that leatherbacks tend to return to the beaches where they were born. But the researchers noticed that a few females get off course each year and end up laying their eggs in Baja California, which is too far north - the sand is too cold to incubate the eggs. Still, if the planet continues to warm, those may be the sea turtle hotspots of the future.