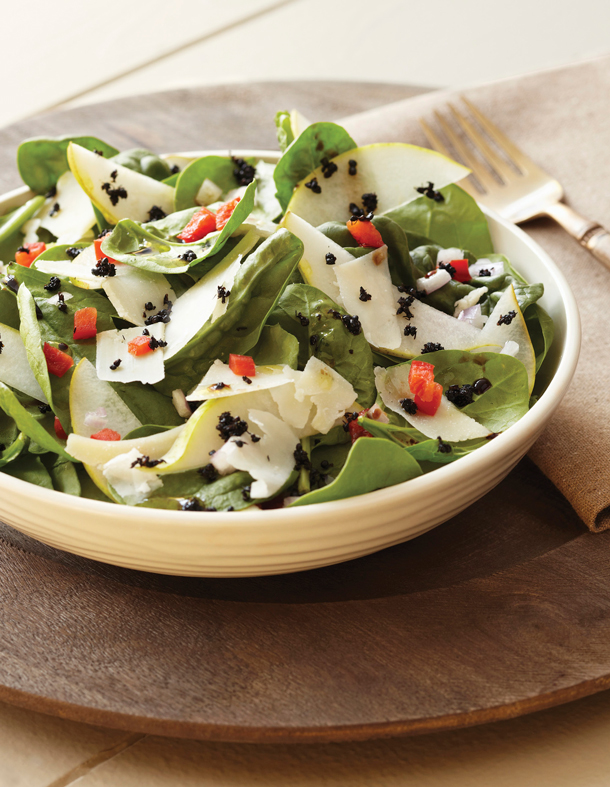 The Pear Salad with Chiangbai Ants is a prime an example of how Gordon chooses to feature bugs in his food, rather than hide them (Photo: Chugrad McAndrews).

Not only should we consider eating insects for environmental reasons; they’re also tasty and healthy. Author David George Gordon just released an updated version of his Eat-A-Bug Cookbook, featuring recipes for crickets, grasshoppers, ants, spiders, centipedes, and their kin. He shares such recipes as Fried Green Tomato Hornworms and Three Bee Salad with host Steve Curwood.

CURWOOD: And when it comes to edible insects, there is one big challenge: how on earth should one prepare six-legged food to appeal to two-legged diners? Well, that's where David George Gordon comes in. He's the award-winning author of many books about animals, including The Eat-a-Bug Cookbook, which is exactly what it sounds like. He joins us now from Seattle to explain the joys and benefits of entomophagy. Welcome to Living on Earth, Mr. Bug chef.

GORDON: Great to be here, thank you.

CURWOOD: So tell me, when did you first start eating bugs? What’s the story of when you ate your first one?

GORDON: You know, I got interested in the subject probably about the mid or towards the end of the 1990s. I had actually been collecting information for another book I was working on called The Complete Cockroach. And that book had a little bit of everything you could possibly know about cockroaches, including people who eat them. So while I was gathering information on that, I wound up with a really fat file folder called bug food. I actually went to an insect fair in Seattle, and they were serving Chex mix with crickets in it, and was pleasantly surprised; they were quite tasty. So that was my first bug that I actually ate on that long...what’s now turned into a 15-year journey. 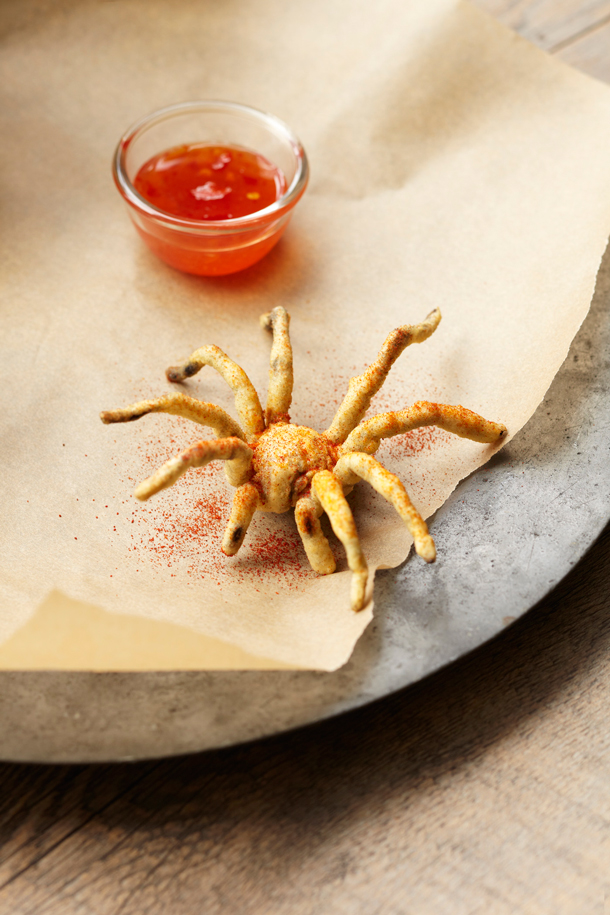 Gordon likes to use tempura batter and a deep fryer to make the arthropods in his cookbook more appealing, like the Deep Fried Tarantula Spider (Photo: Chugrad McAndrews).

CURWOOD: But give me the case now for why people should be eating insects? I actually should say we should be talking about arthropods because there are spiders in your cookbook as well.

GORDON: That’s right, and scorpions and centipedes, so I say insects and their kin. You know that there are a number of compelling reasons to eat bugs. First of all, there’s health benefits. They’re very rich in protein. They have lots of vitamins and minerals. They're low in fat. And they have amino acids that you might not get elsewhere from your normal diet.

CURWOOD; Talk to me about why bugs are more efficient converters of protein than say fish, poultry and meat.

GORDON: There's a measure of the value of food that’s called an ECI rating. That stands for the efficiency of conversion of ingested food. So the ECI rating is very poor on things like cattle. You give a cow 16 pounds of grain, you'll get 1 pound of steak eventually. And you also need to give that cow thousands of gallons of water over its life. Insects, on the other hand, have much higher ECI ratings. If you give certain insects, oh I don’t know, two pounds of grain, you'll get a pound of insect protein back. So that's way less wasteful than trying to raise cattle. Some insects don't even need water. Things like mealworms actually get their water molecules from breaking down the carbohydrates they’re eating in granaries. So the whole idea of farming insects locally has become a much more popular idea. 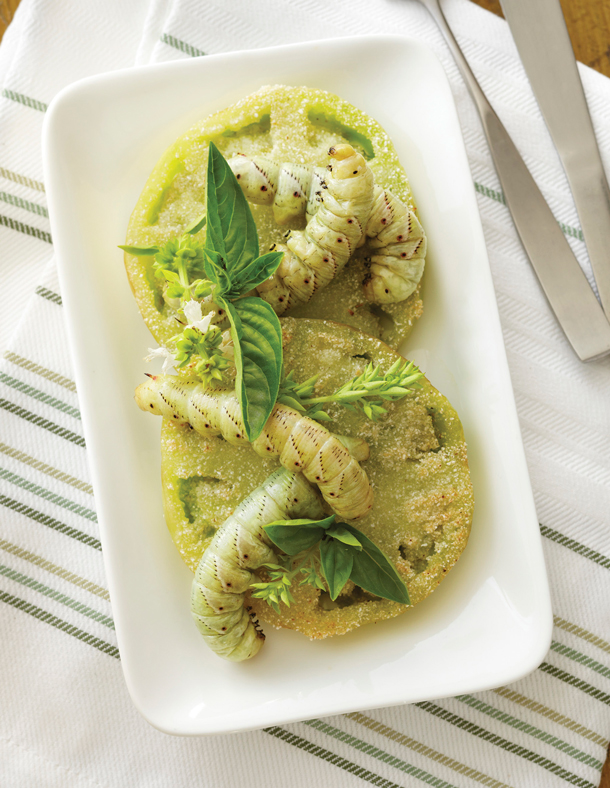 The Pear Salad with Chiangbai Ants is a prime an example of how Gordon chooses to feature bugs in his food, rather than hide them (Photo: Chugrad McAndrews).

CURWOOD: So David, tell me how unusual is it to eat insects?

GORDON: Well, we're kind of the oddballs because we don't eat insects. I've read reports that have said 80 percent of the world's cultures do eat some form of land arthropod. We're talking about places like Mexico, South America, Australia, Africa...just about everywhere but Northern Europe and a lot of the colonies that would include the United States and Canada. In that FAO report, they say there's actually 1.9 billion people who are eating bugs right now.

CURWOOD: You’ve got to admit though, David, that some insects really are...well, they’re gross! I wouldn't want to eat a dung beetle, for example, or some bug that had been exposed to pesticides. I mean, what are some of the hazards associated with eating insects? 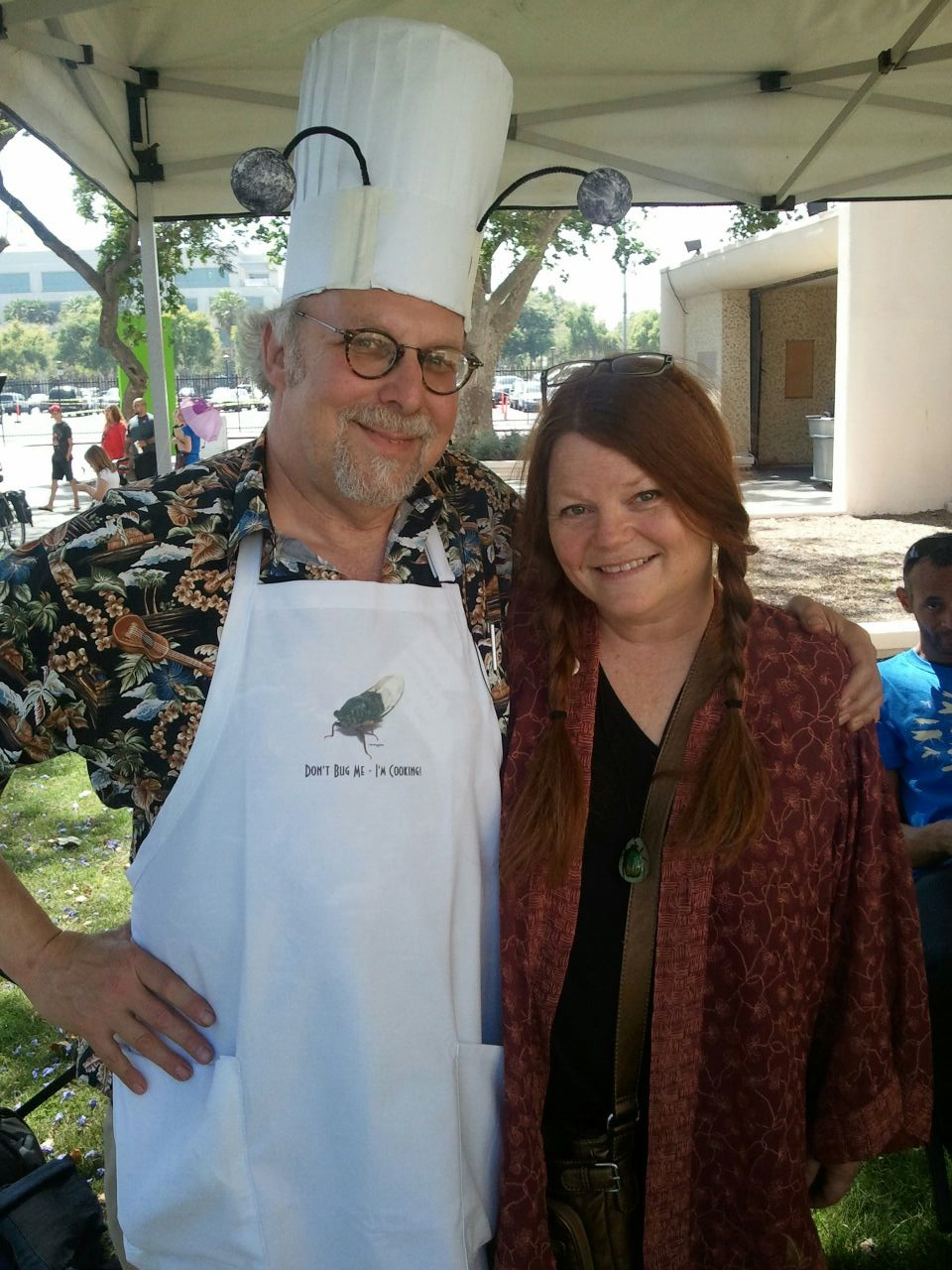 GORDON: Well, pesticides are definitely a hazard. And you know, I mention in the Eat-A-Bug Cookbook that if we got into hand-picking and eating the pests instead of just spraying them with bug spray, we could actually get two cash crops from the same acre of agricultural land. I would always advise people to eat bugs that have been cooked thoroughly. There are potential parasites and germs that could be passed by eating raw bugs. And the same thing would be true about chicken; you wouldn’t want to eat raw chicken or raw pork for those very same reasons.

The other hazards, I would say, well, probably a primary concern is some people are actually allergic to bugs. Now how would they know that if they hadn't been eating bugs before? They would also be allergic to shellfish, so if you went to Red Lobster or some place like that, at the all-you-can-eat shrimp feed and you felt itchy afterwards, well, you probably would have had the same reaction by eating grasshoppers or mealworms or what have you. 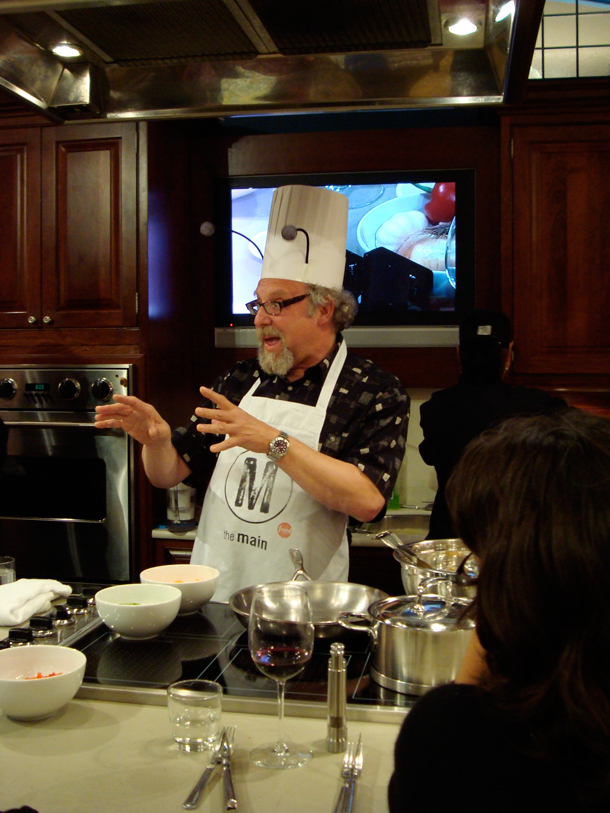 CURWOOD: How did you start presenting the concept of entomophagy to the public?

GORDON: Well, I do cooking demonstrations and I've been all over the place at museums and science centers and schools. I've gotten a pretty good reception for my cooking demos, but I've noticed there are, like, three different kinds of people in the audience. There are some people there who are I’d say, they’re fussy eaters. They say, “no way, I'm just here to observe what you're going to do.” There are other people who are more like the “I'll try anything once” group. Californians are a classic example of that. And then there are a third group. I get the impression that they got up hours earlier and drove a long distance, and they can't get started fast enough. They’re like, “when you gonna serve the bugs?” 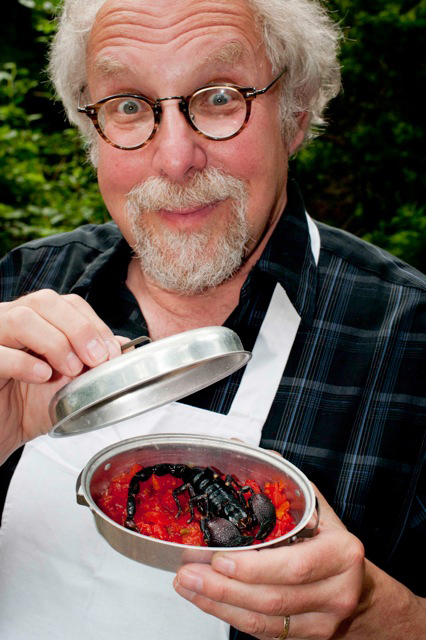 Gordon carefully cuts off the venomous scorpion tail before dining, even though cooking a scorpion denatures the proteins that would provoke a reaction (Photo: David George Gordon).

CURWOOD: Now let's see. I'm looking at your cookbook. There’s some recipes here for everything from Bugs in a Rug, Really Hopping John, and Ant in Pants, and Cream of Katydid Soup. And I have to say though that most of these aren't like Cream of Katydid Soup. They’re more quite...they put the insects right in your face. There’s no hiding what's in the ingredients. You’re going to see it. I mean, you have a salad with ants all over it, for example.

GORDON: Yes, it was a conscious decision on my part. I’ve talked to people, though, you know they’re boasting to me; they say, oh, I went to a French restaurant and had escargots - snails - and I say, 'well that's great, what it taste like?' and their answer almost uniformly is 'garlic butter'. 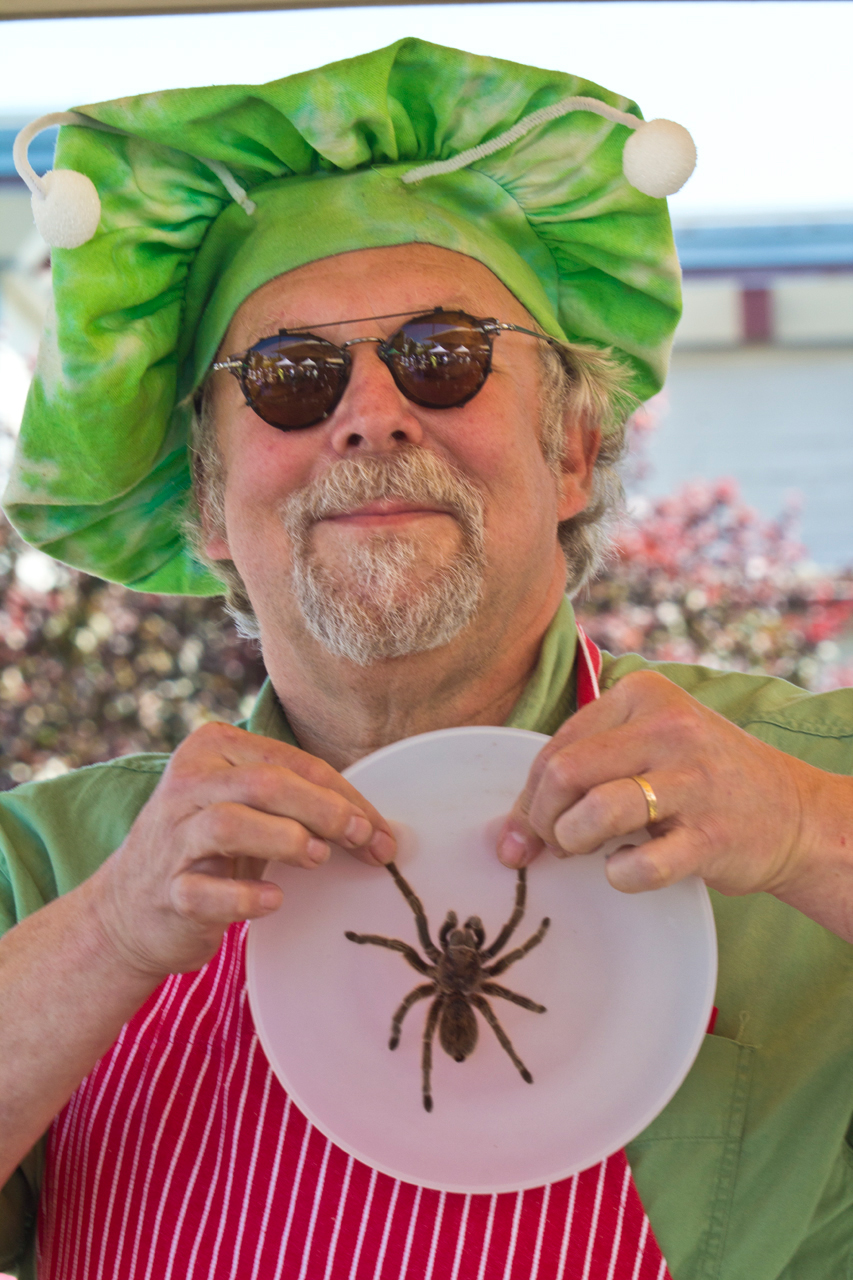 Gordon keeps a tarantula as a pet, but makes a point not to bond with the tarantulas he cooks (Photo: David George Gordon).

GORDON: Because they’ve been seasoned. I kind of would like people to be able to say, 'well, they taste kind of like slugs, but a little more piquant!'

GORDON: I really wanted people to be aware of what they were eating and what it tasted like, so not only did I not cover up the bugs, I also didn’t want to bury them in elaborate sauces or overseason them.

CURWOOD: So, I’m looking at this photo in your book. It’s got to be one of the best photos here. It’s for Fried Green Tomato Hornworms where these giant, bright green caterpillars rest on top of breaded tomatoes.

GORDON: So, yes, I chose to make sure that the hornworms in that recipe are really prominent. They’re big and green to begin with, so it’s hard to conceal them.

CURWOOD: And they’ll show up in your garden if you have tomatoes out there.

GORDON: You know, if you can’t beat them, you should eat them! That’s my motto.

GORDON: That’s a delicious one, and that’s sort of my homage to what got me started in the first place. It’s basically a Chex mix that you can make yourself, all sized proportionately with the bugs. And then I like to use oven-baked crickets. These are crickets that I’ve purchased, they’ve been frozen, defrosted and then baked on a cookie sheet. Mix those in with that snack mix and you get quite a satisfying little crunch there. 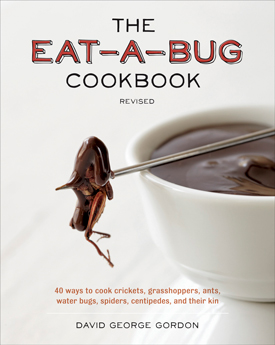 CURWOOD: Hey, uh, Dave, before you go, what’s your favorite recipe in the book?

GORDON: I really like waxworms. These are animals that in the wild as caterpillars actually feed on the wax and the honeycomb in a beehive. When you actually roast them, they taste like pistachio nuts. It’s, like, what’s not to like? So I have a recipe in this book for White Chocolate and Waxworm Cookies. If I did prepare those and offered them to you in a blindfold test, you’d probably want another one.

CURWOOD: And if I had to look at it?

GORDON: Well, you might have qualms there because, you know, we’ve just been trained to think...be distrustful of anything that’s caterpillar or wormlike in shape.

CURWOOD: So, what, in 50 years, how do you see people getting their protein?

GORDON: I think what you’ll see in labels...I’ve already seen this not necessarily about insects, but they say animal protein. It doesn’t say what those animals are. They could be sea urchins for all I know. But in actuality, I think they’ll start doing that with insects. So I think insects will be reared commercially. I think they will be used as an ingredient in a lot of our foods, as supplements, what have you, to bolster the idea of getting a little bit more protein from your meal. But I also think they will be served as delicacies just like they are in these other countries where bug eating reigns. And people will actually, I hope, become more sophisticated, and learn to get over their fear and hatred of insects, and start enjoying them like the rest of the world does.

CURWOOD: David George Gordon is the Bug Chef and author of The Eat-a-Bug Cookbook. David, thanks so much for taking the time.

GORDON: Thanks for having me. This has been great.

CURWOOD: And if you want to try eating bugs yourself, there are recipes at our website LOE.org.