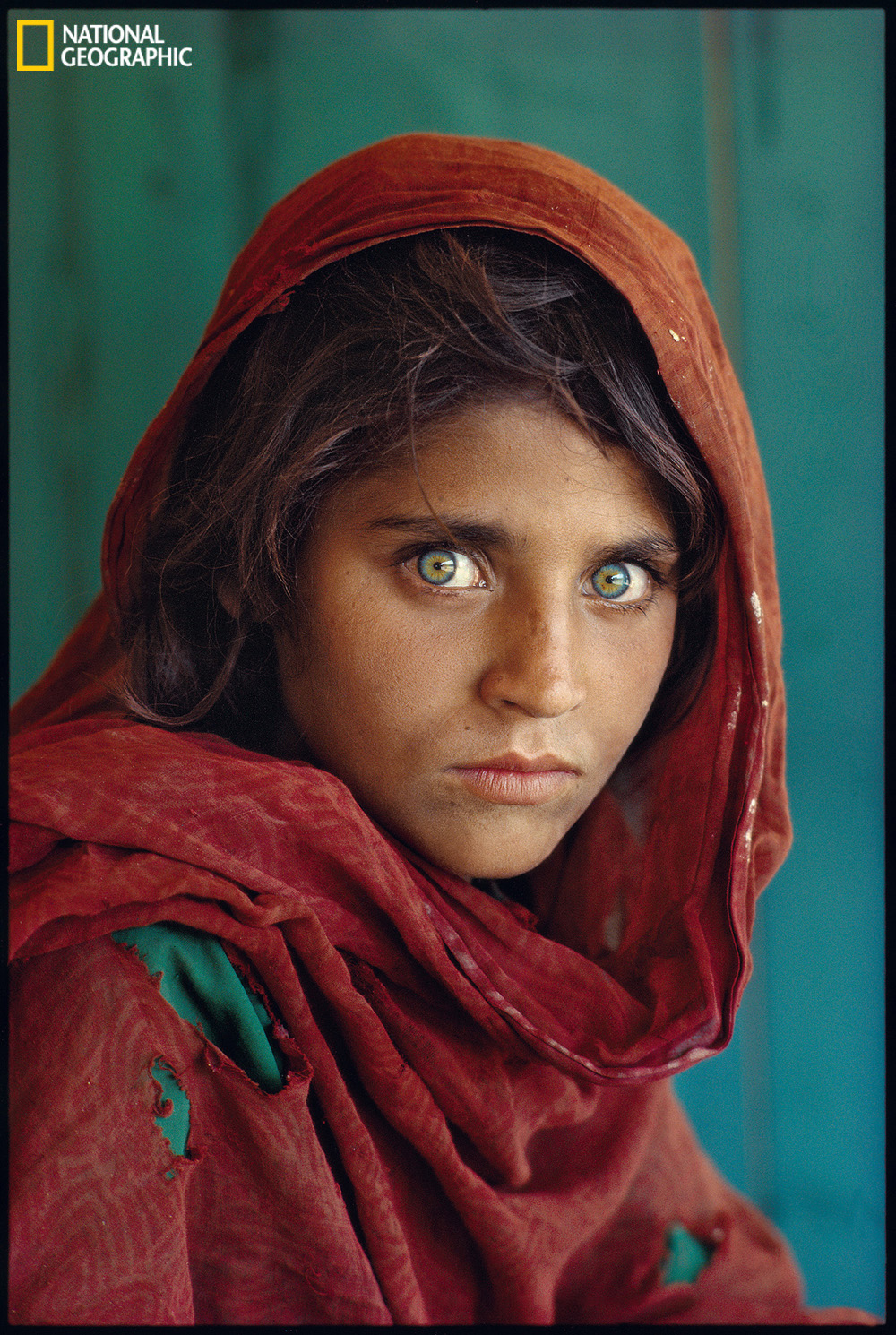 Steve McCurry’s iconic photograph of a young Afghan girl in a Pakistan refugee camp appeared on the cover of National Geographic magazine’s June 1985 issue and became the most famous cover image in the magazine’s history. It also graces the cover of the 125th anniversary issue (Photo: Steve Mc Curry from the October 125th anniversary issue of National Geographic magazine.)

CURWOOD: For armchair adventurers and nature enthusiasts alike, National Geographic magazine has been essential reading for generations. And in its October issue, the magazine is celebrating its 125th anniversary and revisiting some of its most iconic photographs - that haunting image of a young Afghani refugee girl is on the cover. Sarah Leen is the magazine's Director of Photography and joins me now to talk about the role of pictures in telling the National Geographic Society's stories. 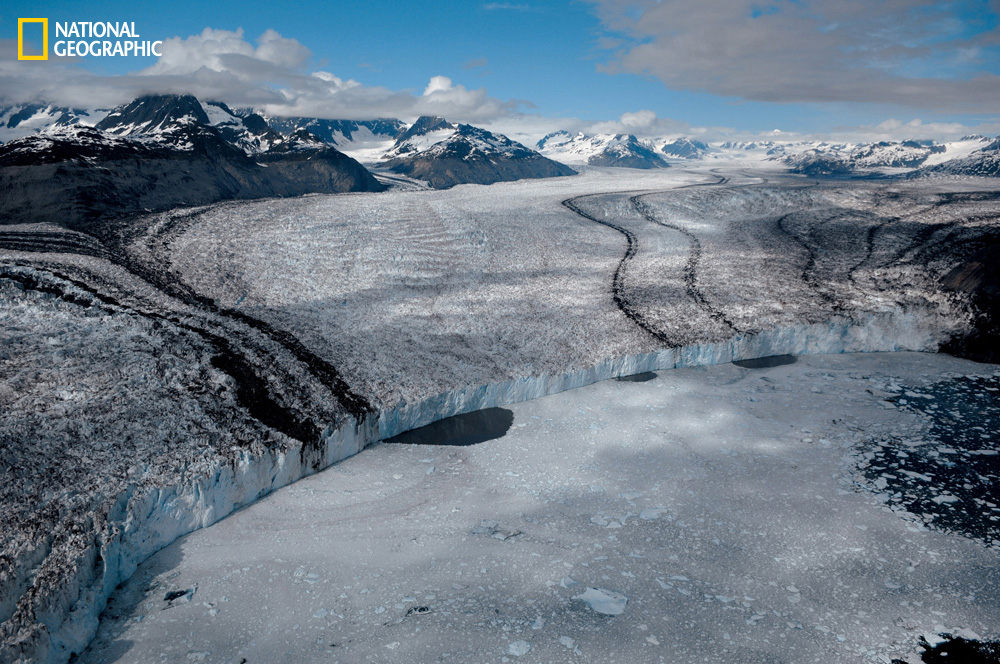 LEEN: The first issue in 1888 was pretty much like a little pamphlet almost, it was started as a scientific journal that reported back from explorers and scientists in that were sent out into the field. So it was just only text at the very beginning. I think that it was the following year that they had a map, but it wasn't until really about 1904 that we started really using photographs. There was an article that didn't come through and they had some pages to fill, and the president of the society had these set of images from Tibet, and they decided to publish those photographs. So it was kind of the first picture story and first series of images ever published, and some people were shocked and dismayed and thought it was just the end of everything.

CURWOOD: Now, of course, today National Geographic photographers are well-known to be, well, let’s call them intrepid. You know, they’ll do anything for a photo, come home with frostbite or mosquito bites. But I imagine those early days of the magazine must have been even tougher without the lightweight equipment that we have today. 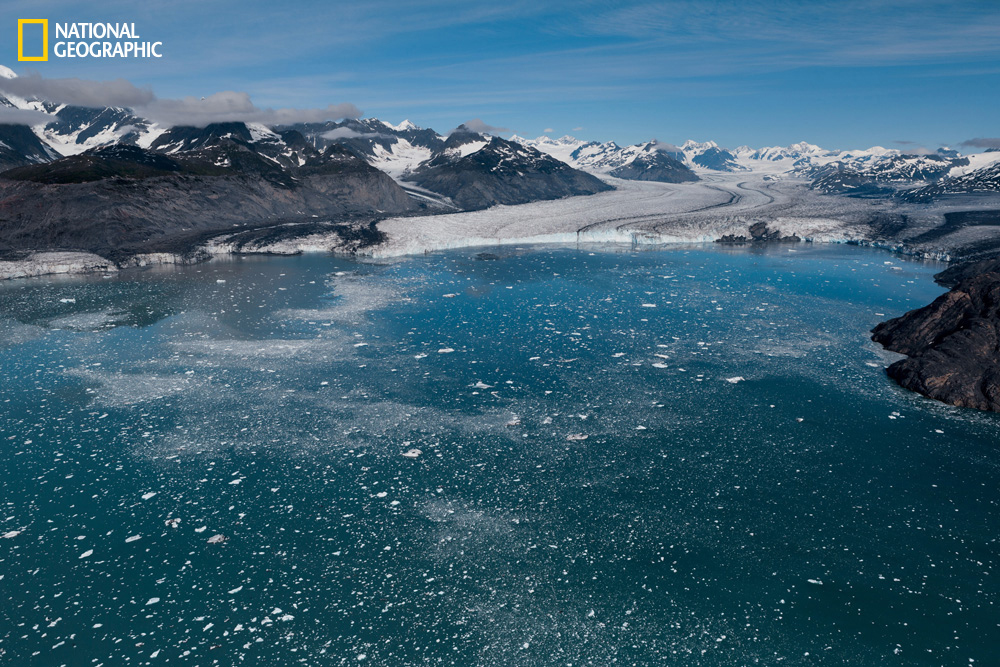 2012 Columbia Glacier, Columbia Bay, Alaska. Iceberg-choked Prince William Sound reveals that the retreat of the Columbia Glacier is accelerating: It’s lost two more miles of ice in six years. And since 1980 it has diminished vertically an amount equal to the height of New York’s Empire State Building. (Photo: James Balog from the October 125th anniversary issue of National Geographic magazine)

LEEN: Yes, those early days were much more like an expedition where they would go with the whole team. There’s some famous photographs of Joseph Rock, who was an early explorer in China, and he would bring even, like, a bathtub. They would bring all kinds of stuff. It would be, like, 50 porters carrying things. Of course, now, it's much much different.

CURWOOD: Well, let’s talk about a few of the photographs that you featured in your 125th anniversary issue.

CURWOOD: You have a segment that features North Korea. There’s a picture in this layout that just jumps out. It shows a blackout in Pyongyang, North Korea's capital, but one thing remains illuminated. Would you describe that picture for our listeners please? 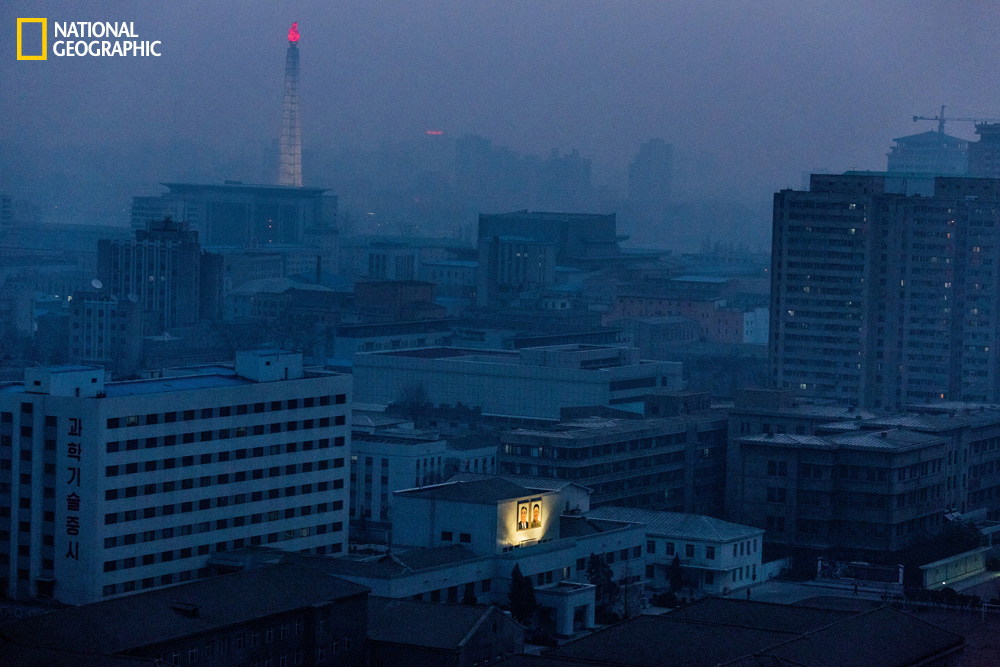 At dawn, portraits of Kim Il Sung and his son Kim Jong Il are still lit up in Pyongyang. Even during the city’s blackouts, electricity is reserved to light the flame atop Juche Tower. (Photo: David Guttenfelder from the October 125th anniversary issue of National Geographic magazine)

LEEN: This is a really wonderful image. It’s very blue. You're looking out across the city from another tall building, and it all looks dark, like you say, there’s a blackout except there is just one thing illuminated, which is portraits of Kim Jong Il and Kim Jong Un, the former leader and current leaders of North Korea, and it's just this very eerie-looking scene, but quite beautiful at the same time - very moody. I really like that picture, I’m glad you pointed that one out. 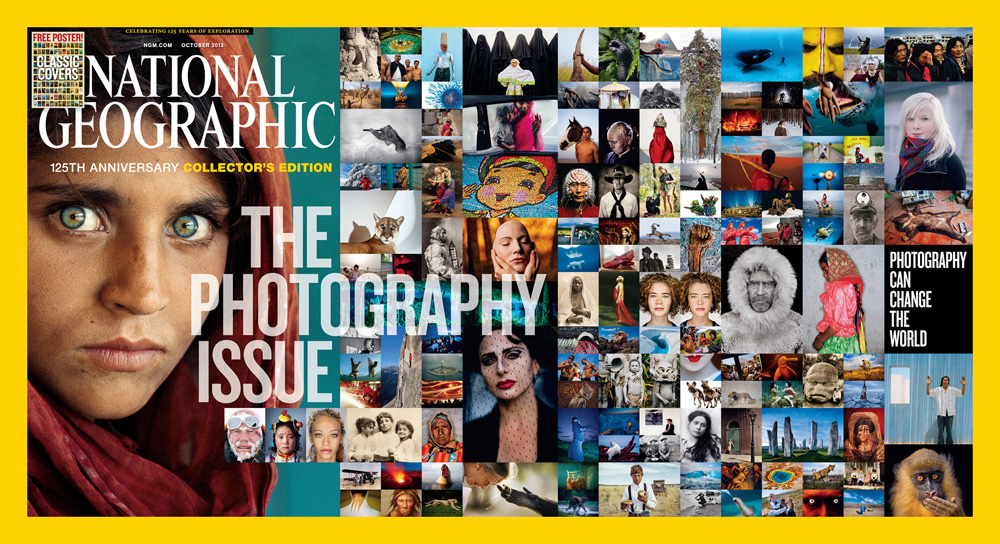 CURWOOD: There’s another theme of this special edition, your anniversary edition of National Geographic, and that theme is ‘relate’, and I’d like to call attention to a really striking image of that segment. It's a couple in Afghanistan on their wedding day. The groom is 40, the bride about 11, and the caption says close to half of Afghan girls marry before they’re 18. But I think this has to be a classic case of a picture being worth a thousand words.

LEEN: Yes, Stephanie Sinclair who took that image, she has been working on the issue of child brides all over the world for a number of years. This particular image I find to be almost chilling when you look at it, this adorable little girl trying to imagine her being married to this guy. You say he's 40, but he looks like, older than 40, his beard, and kind of craggy, but this is the custom there. Photography can help you relate and connect to other people and get you care about things, and I think once you start getting people to care about things you can get them to get involved and maybe even help change the world, and I think that's definitely one of Stephanie's missions.

CURWOOD: We’re just about done, but, of course, I have to ask you...you have this chart that you call the naked truth.

LEEN: I knew this was...it was gonna be this. [LAUGHS]

CURWOOD: And let me read the text next to it. It says, “Everybody always mentions the nudity in National Geographic. For the special issue of photography we figured we should mention it too and document how much the magazine has actually published.” And you have these charts going back, looks like some time in the 1890s you published your first bare-breasted photo, you show the issue that had the most some time in 1912, um, what about this?

LEEN: Well, as a photographer you go out and you say you’re with National Geographic Magazine and two always things get said, ”Oh we have a basement full of those at home,” and the other thing that gets said often, mostly by guys, is, “I saw my first bare-breasted woman National Geographic.” And it was just kind of like, oh, there it is, and it was like, sort of, we’re kind of connected with that, like this is where people first saw, sort of, naked women, and when we were brainstorming ideas for the issue, I said, “Let’s get to the bottom of this. Let’s find out how actually many times this has really happened, and find that number.” So there was some poor soul who went through 125 years of National Geographic Magazines and counted them, and we came up with that 529 number.

CURWOOD: Now, today almost everyone has a pretty decent camera right on their phone with them all the time practically. What do you see as the role of everyday folks documenting the world now?

LEEN: I'm very excited about it. I mean, I'm one of those people, you know, I'm photographing with my phone all the time and posting to my Instagram feed, and we have a really robust Instagram feed ourselves. It's about 2.7 million people follow the Nat Geo instagram feed. It’s just an exciting time for photography in general.

CURWOOD: Sarah Leen is Director of Photography for National Geographic. Thanks so much for taking this time.

LEEN: It's my pleasure. Thank you for having me.

CURWOOD: And keep on taking those pictures.


National Geographic: The Power of Photography