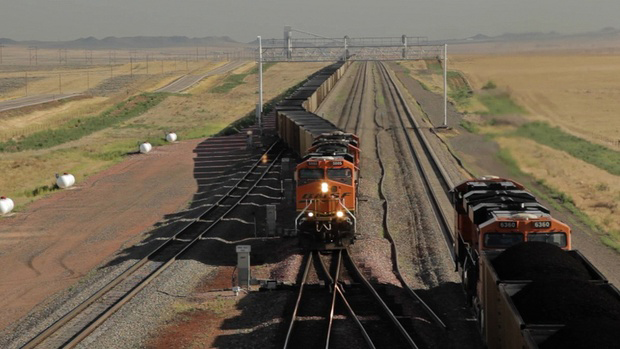 Plans to export coal from the Pacific coast at Cherry Point in Washington State face a new, yet ancient, obstacle. As Ashley Ahearn of the public radio collaborative Earth Fix reports, the proposed terminal would be on Native American sacred grounds.

CURWOOD: It’s Living on Earth, I’m Steve Curwood. The largest coal export terminal in North America could well be built in Northwest Washington State at Cherry Point. Native Americans, including the Lummi Nation, have lived around Cherry Point for millennia. Now the Lummi are speaking out about what they stand to lose if the site is developed. Ashley Ahearn of the public radio collaborative EarthFix has the story.

AHEARN: Jay Julius pulls up his hoodie and guns the engine of his fishing boat. We're leaving the Lummi reservation north of Bellingham, Washington. Julius is a councilmember of the Lummi Tribe.

JULIUS: So now we're moving out to the deep.

AHEARN: Cherry Point stretches out before us - a long strip of green coast - boxed in on one side by an oil refinery and on the other by an aluminum smelter.

JULIUS: The current tankers come through here, through this little channel to get to the refineries up there and that's where the coal tankers would come through.

AHEARN: We approach Cherry Point and Julius cuts the engine. His voice grows soft as he looks towards the shore.

JULIUS: I see this as my people’s home. I can envision it. I know what’s there now. Our people used to use this as a harbor.

AHEARN: The Lummi and their ancestors have inhabited Cherry Point for more than 3,000 years. They signed away this land in a treaty with the federal government in 1855, but they still have strong cultural and spiritual ties to this place. In the 1950s white people began excavating Lummi cultural artifacts at Cherry Point from a site known as 45WH1.

Its exact location is not publicly shared, but it's the most heavily studied archaeological site in Whatcom County.

CAMPBELL: The Cherry Point collection's big. We have at least 150 boxes.

AHEARN: Sarah Campbell has been analyzing artifacts from Cherry Point and site 45WH1 since the late ‘80s. She's a professor in the anthropology department of Western Washington University in Bellingham. Campbell takes me into a small room lined with metal shelves. She squats and points at several rocks on a bottom shelf.

CAMPBELL: I'm not really sure I'm up to pulling it out but if you look back. Can you see this one?

CAMPBELL: There's the hole right there. That’s a really big one.

AHEARN: Thousands of years ago, someone bored a hole through the top of the rock so it could be used to weight down fishing nets. Campbell pulls out other boxes and sifts through dozens of tiny plastic bags, each one containing artifacts from site 45WH1. Harpoon points, beads, jewelry…

CAMPBELL: There's a fancy kind of handle. This is an awl made out of an ulna, a deer ulna. They would probably be used in basketry.

AHEARN on tape: Are there human remains at this site?

AHEARN: The Gateway Pacific Terminal could be built on top of this site, despite the risk of disturbing ancient Native American remains.

BROOKS: The state law says they must be protected, but it doesn't say they can't be moved. 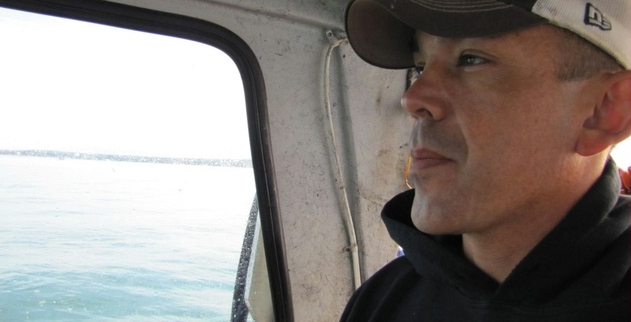 AHEARN: Allyson Brooks is the head of the Department of Archaeological and Historical Preservation. The state agency reviews potential impacts to historic sites when developments, like the Gateway Pacific Terminal - are proposed. Brooks says that under the National Historical Preservation Act, certain measures have to be put in place before construction can begin at a place like 45WH1, or WH1 as she calls it.

BROOKS: So in this case if WH1 is going to be impacted in any way, if there's any ground disturbance, or even if roads are going to be put over the top with fill, the process is avoid, minimize and mitigate.

AHEARN: That means the companies that want to build the terminal need to have a plan in place before construction can begin, and they need to consult with the Lummi about the potential impacts to the archaeological site. But what few people know is that SSA Marine and Pacific International Terminals, the companies that want to build at Cherry Point, have already disturbed the site.

In 2011, Pacific International Terminals bulldozed more than nine miles of roads at Cherry Point and cleared more than nine acres, including some wetlands. The company was sued for violations of the Clean Water Act and ended up settling with ReSources, a Bellingham-based environmental group. Very few details of the settlement were made public, until now.

AHEARN: At his law offices in Seattle, Knoll Lowney rustles through files from the case his firm won. He pulls out a map that he got from Pacific International Terminals through the lawsuit. It's dotted with little green squares. These mark 37 boreholes the company drilled at Cherry Point. One of those boreholes was right in the middle of archaeological site 45WH1.

AHEARN: Companies drill boreholes to test the soil composition and geology of a site‚ basically to see if a site like Cherry Point will stand up to 48 million tons of coal moving over it each year. No one knew about the disturbance at Cherry Point until a local was out walking in the area, saw the activity, and reported it.

The company said it was an accident. Lowney disagrees. He pulls out another document from Pacific International Terminals. It was submitted to the Army Corps of Engineers four months before they began non-permitted drilling at Cherry Point. It shows that the company knew the exact location of site 45WH1. It also knew that it would need permits and consultation before it could do any work near the site. But it drilled there anyway.

LOWNEY: By going ahead and doing it illegally and then saying, “oh sorry” but actually having the data now, it allows them to start planning now so that if they get their permits someday, they're ready to build.

AHEARN: Pacific International Terminals settled with Lowney's clients for $1.6 million dollars. The Lummi chose not to take part in the lawsuit. The tribe was offered $94,500 as mitigation for the damage done. They refused the money. Pacific International Terminals and their parent corporation, SSA Marine, declined repeated requests to be interviewed for this story. But Bob Watters, the Senior Vice President of SSA Marine, emailed a statement.

"We sincerely respect the Lummi way of life and their cultural values. Claims that our project will disturb sacred burial sites are absolutely incorrect and fabricated by project opponents. We continue to believe we can come to an understanding with the Lummi Nation regarding the Gateway Pacific Terminal.”

JULIUS: No is no. If they don't understand that we are at a no then…

AHEARN: His shoulders tense with quiet rage when I ask him about what Pacific International Terminals did at Cherry Point.

JULIUS: Every time I go up there it's all that's on my mind is what took place here at Cherry Point when these guys bulldozed over it and called it an accident. It's obvious. It doesn't take a genius to figure it out.

AHEARN: The Army Corps of Engineers will ultimately decide how to weigh the cultural and spiritual impacts the Gateway Pacific Terminal will have on the Lummi people. If the tribes aren't happy with the Corps' decision, they could sue.