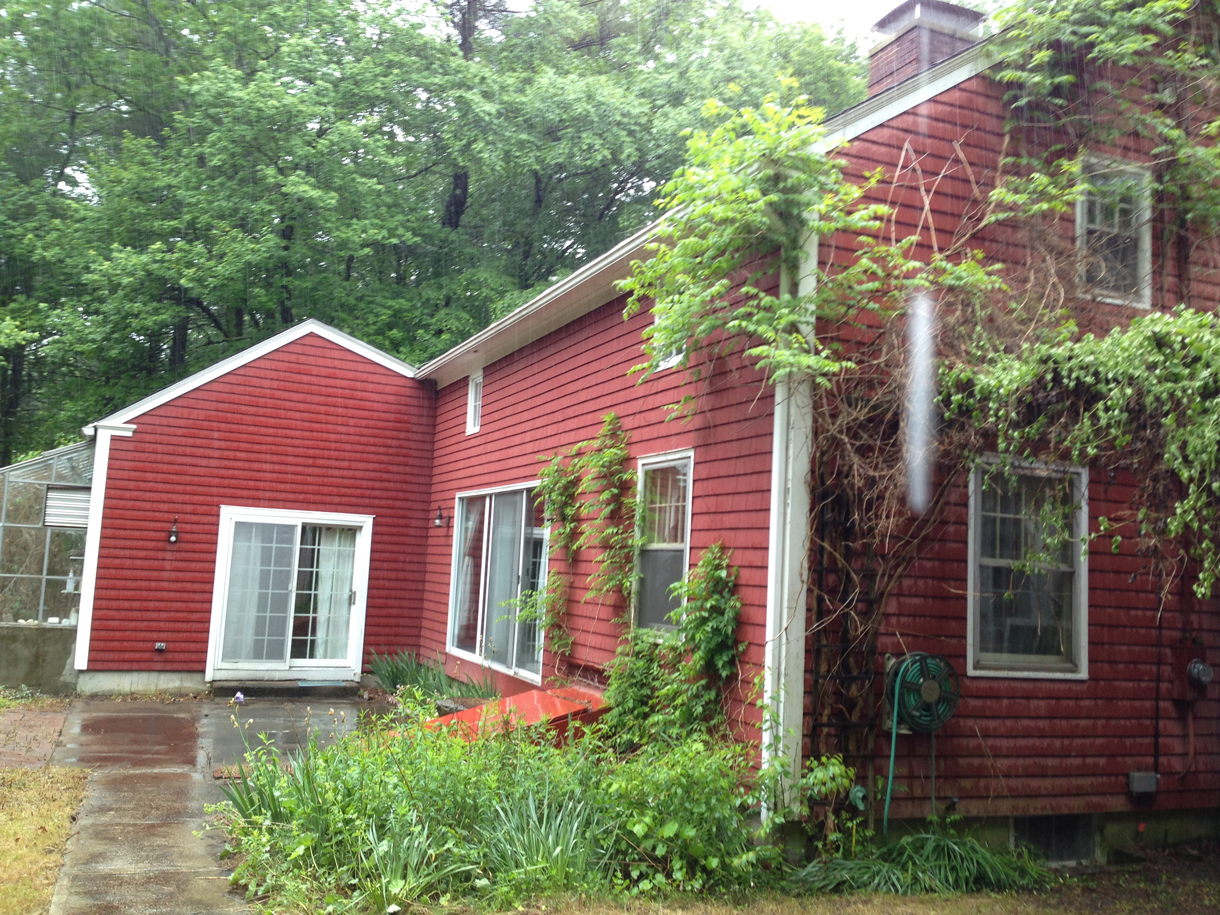 The little red house by the trailhead used to be occupied by Ed Bouchard and Henry Richardson. (photo: Emmett FitzGerald)

The Highpointers Club is a group of dedicated and somewhat eccentric outdoor enthusiasts who try to reach the highest point in all 50 states. To achieve their goal, members need to summit giant peaks like Mt. Denali in Alaska. But as Living on Earth's Emmett FitzGerald learned in Rhode Island, even the lowest highpoints can be a challenge.

CURWOOD: It's Living on Earth, I'm Steve Curwood. Collecting things is an age old hobby. From snow globes to baseball cards to sea shells, just about anything can be a collectible if you put it in a nice glass case. But there are people in America who collect something that is never going to fit in a case, the garage, or an attic - the highest points in the 50 states. Emmett Fitzgerald has the story from Foster, Rhode Island.

FITZGERALD: Ask a group of Rhode Islanders what the highest point in the their state is, and you’ll get a few different responses. I’ve heard everything from the fifteenth floor of the Science Library at Brown University to the very top of the landfill in Johnston. Truth is, it’s just an ordinary hill in the woods.

BURK: Right now we’re at the trailhead if you wanna call it that, near the summit of the Rhode Island state highpoint, it’s Jerimoth Hill.

FITZGERALD: Since 1992, Stony Burk has crisscrossed the country in dogged pursuit of an unusual goal—to stand on the highest point of every state in the country. Stony climbs each peak on foot, but getting to the trail requires a lot of driving. Today, he’s standing next to a red jeep he calls Cynthia Rose—the car that’s been with him the whole way.

BURK: She’s been to all 48 state highpoints at least twice. She’s on her third time around. And it’s got almost 395 thousand miles on it. Same motor. 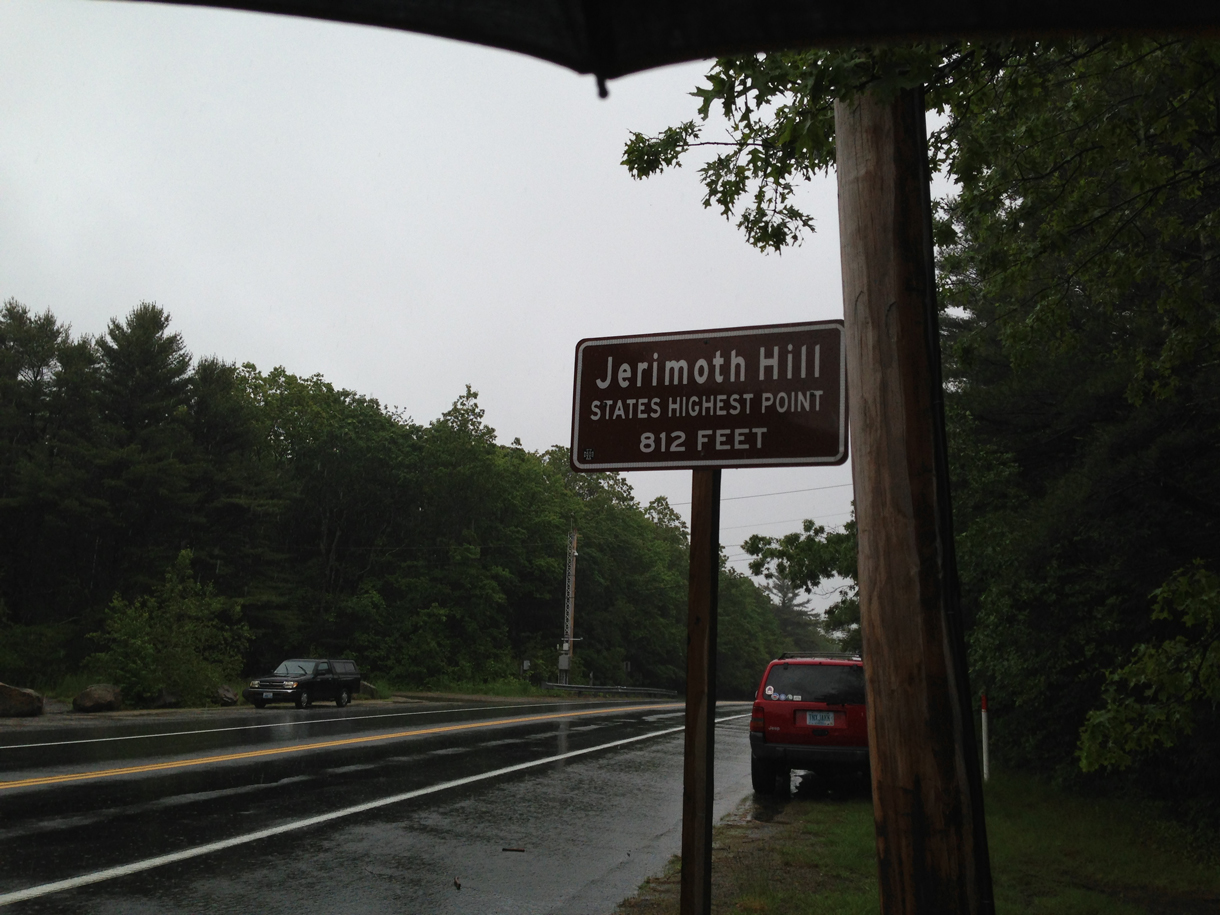 FITZGERALD: Stony isn’t the only one with this vacation-consuming hobby. There’s a whole club of people delighted to drive a few thousand miles to stand on top of Clingman’s Dome, the highest point in Tennessee, or Mount Magazine, Arkansas’ apex.

WALLEN: My name is Roy Wallen and I’ve been in the Highpointers Club for…a long time. 15, 20 years probably.

FITZGERALD: The club itself goes back longer then that. Stony Burke says it began 30 years ago, with a guy named Jack Longacre.

LONGACRE: Back in 1987, 1988 he posted an ad in Outside Magazine to see if anybody else who was as crazy as he was to go to the 50 state highpoints and he got a lot of responses and the club was formed from then.

FITZGERALD: Since then, the Highpointers Club has taken off.

LONGACRE: We have over 2500 dues paying members.

FITZGERALD: Only a handful of those have reached all 50 state highpoints. A few of the peaks on the list require serious mountaineering experience and a bit of luck. Stony tried to climb Denali in Alaska twice, only to get blown off the mountain both times. Roy Wallen says you have to prepare for each highpoint differently.

WALLEN: Today ’cause it’s raining I brought a rainjacket and that’s it…if you’re going to a big peak you could have full winter gear and crampons and ice ax.

FITZGERALD: You didn’t bring your crampons for Jerimoth Hill?

FITZGERALD: Although its only 812 feet tall, Jerimoth Hill isn’t the lowest highpoint out there. That title belongs to Florida’s Britton Hill, which clocks in at a mere 345 feet. Still, Stony Burk says the trip to Rhode Island’s highest point isn’t exactly a demanding trek. 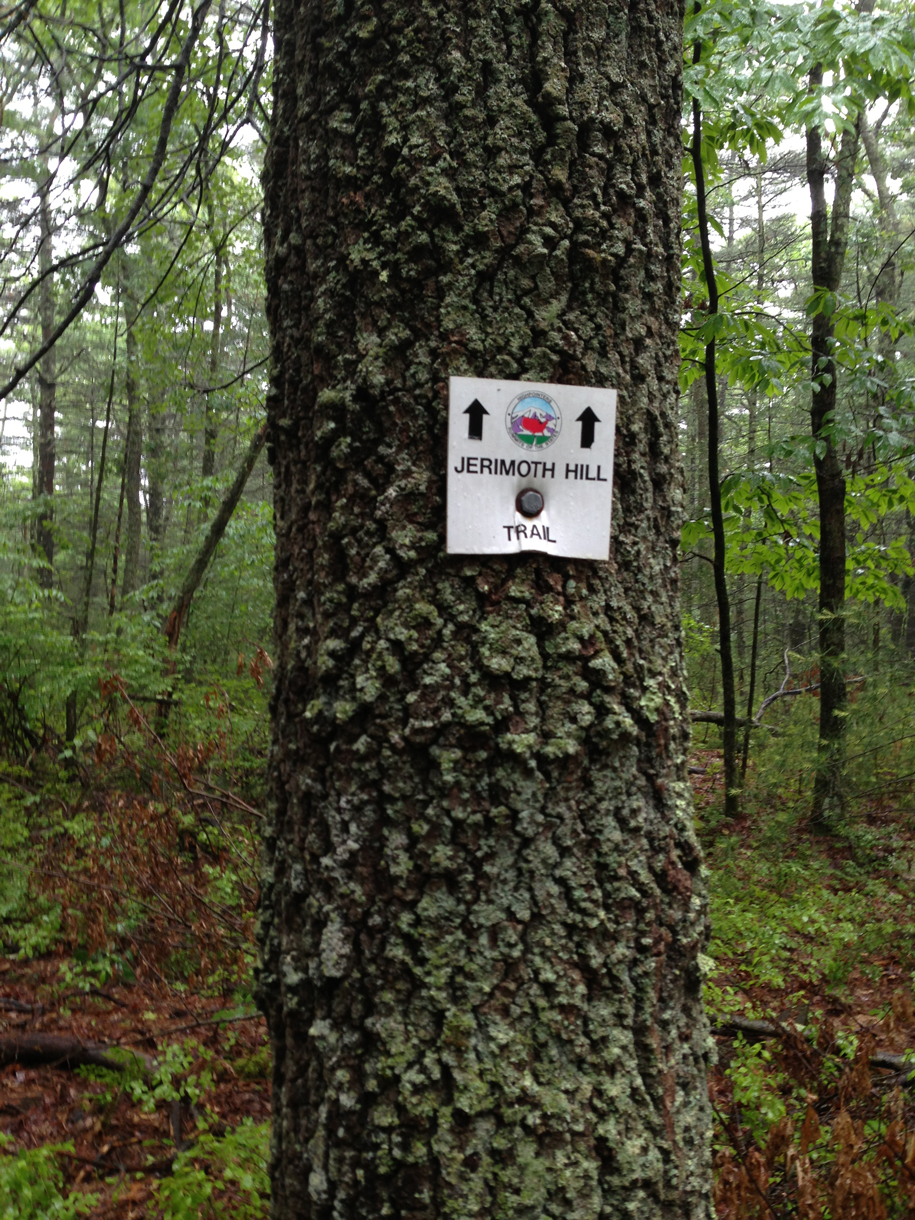 A sign along the trail to Jerimoth Hill (Photo: Emmett FitzGerald)

BURK: The elevation change from the trailhead to the summit is negligible, its probably maybe 8 feet.

FITZGERALD: Although it’s little more than a leisurely walk, Jerimoth Hill wasn’t always so easy to get to. Back in the 1990s, Henry Richardson and Ed Bouchard ran a piano business out of their home by the trailhead. Henry and Ed liked their privacy, and didn’t want hikers wandering around their property looking for the highpoint.

BURK: They would show up in the evening or they would have headlamps on, trying to find it, and they’d wander around in the woods because it wasn’t really clear where the actual summit was. And Henry Richardson could hear these people in his woods and he’d get upset about it and he’d chase these people out, sometimes with a bed post or maybe even waving a pistol or something like that. I’ve heard several stories and I’ve had several friends that had those kinds of encounters.

FITZGERALD: Henry Richardson closed access to Rhode Island’s highpoint altogether, but the highpointers kept coming. Once, a hiker from Iowa tried to take a picture of the no trespassing sign outside Henry and Ed’s little red house.

BURK: Henry ran out of the house and asked him what he was doing and the fella tried to explain it to him but Henry grabbed the camera and ripped the camera strap off his neck and threw it to the ground and broke it. He kind of ran away in fear at that point, and he called the police to see if they could do anything about it, and they pretty much explained that he lived in Iowa and Henry was here and he had the right to keep people off his property.

FITZGERALD: Then two men from Alaska tried to find an alternate route to the highpoint at night. They crossed through another private property a few doors down from Henry and Ed’s house.

BURK: And the fellas that lived there ended up holding the Alaskans at gunpoint until the police came and arrested them.

But the club continued to negotiate for access, and in 1999 they struck a deal with Henry and Ed to allow hikers access to the summit on a few days each summer. Highpointers from all over the country flocked to Rhode Island for a chance to bag Jerimoth.

BURK: On average we’d have between 70 and 180 people on those particular days show up.

FITZGERALD: The open-access days continued without serious incident until 2001, when Henry Richardson died, and a couple named Jeff and Debbie Mosley bought the little red house by the trailhead.

BURK: We made fast friends with the Mosleys over the years. They opened access seven days a week.

FITZGERALD: When the Mosleys moved out, the state bought the land, and now Jerimoth Hill is open to the public all day every day.

FITZGERALD: As the rain picks up, we make final preparations for our ascent. Stony suggests we time the trip, and Roy says he’ll count our steps. We huddle under my umbrella, and strike out down the trail.

BURK: Just about 4 minutes in … past another trail sign.

FITZGERALD: Have we arrived?

BURK: We’re here. This is the summit.

FITZGERALD: As we catch our breath, Stony and Roy tally the stats.

FITZGERALD (on tape) How are you guys feeling after that?

BURK: A little out of breath, probably just sit here for a little while and recuperate and see if I can get used to the altitude.

FITZGERALD: Roy says that as highpoints go, Jerimoth Hill isn’t much to look at, just a few rocks in a cluster of trees.

BURK: No there’s no view, but it’s a nice spot in the woods.

FITZGERALD: On top of every highpoint there’s a registry book. Jerimoth Hill’s registry is in green ammo box nestled in the rocks. 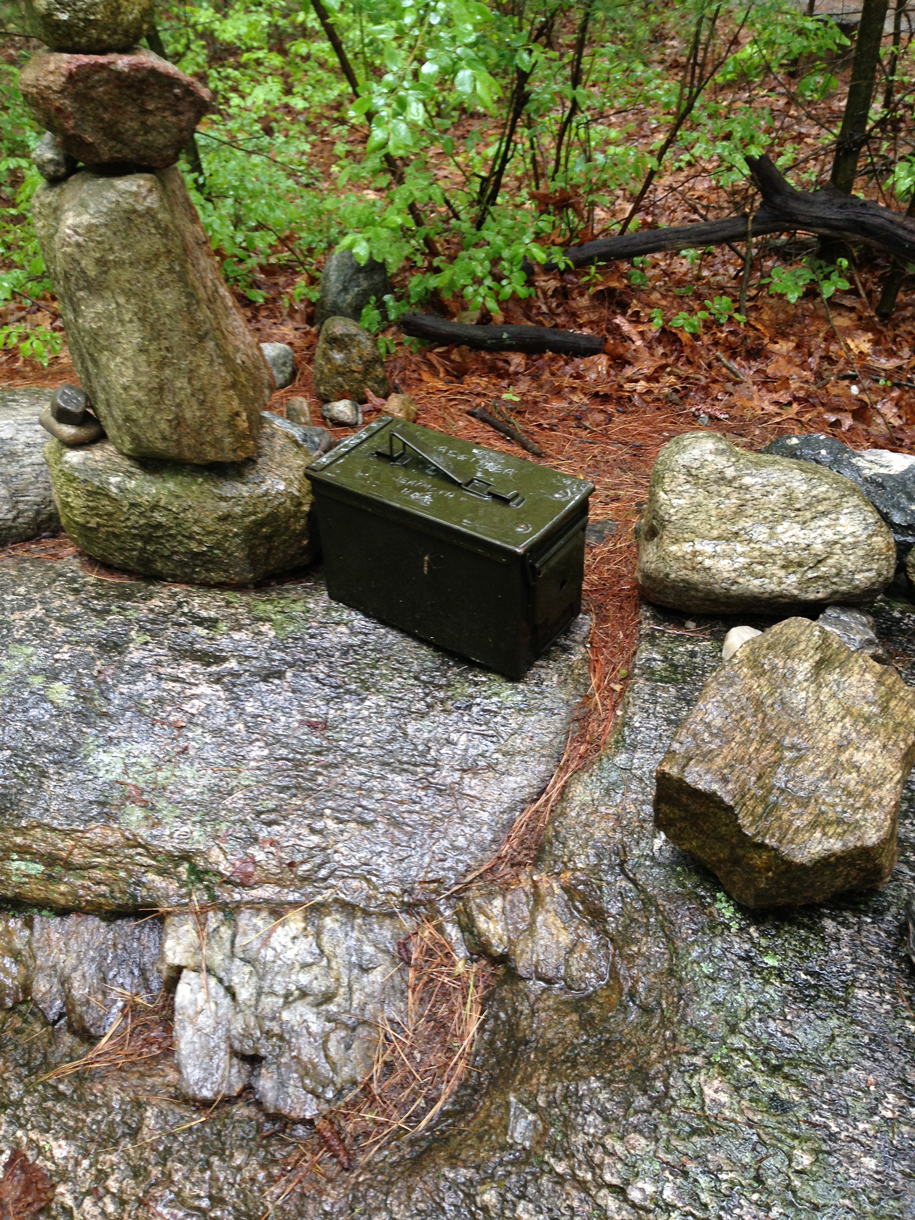 The registry book for Jerimoth Hill is inside an old ammunition box (Photo: Emmett FitzGerald)

FITZGERALD: The damp pages are filled with names of highpointers from all over the country.

FITZGERALD: Stony scrawls our names into the logbook, then pulls out a pamphlet about the Highpointers Club. It lists some of the records that the club keeps track of - most highpoints in a single day, most highpoints after age 75, that sort of thing. 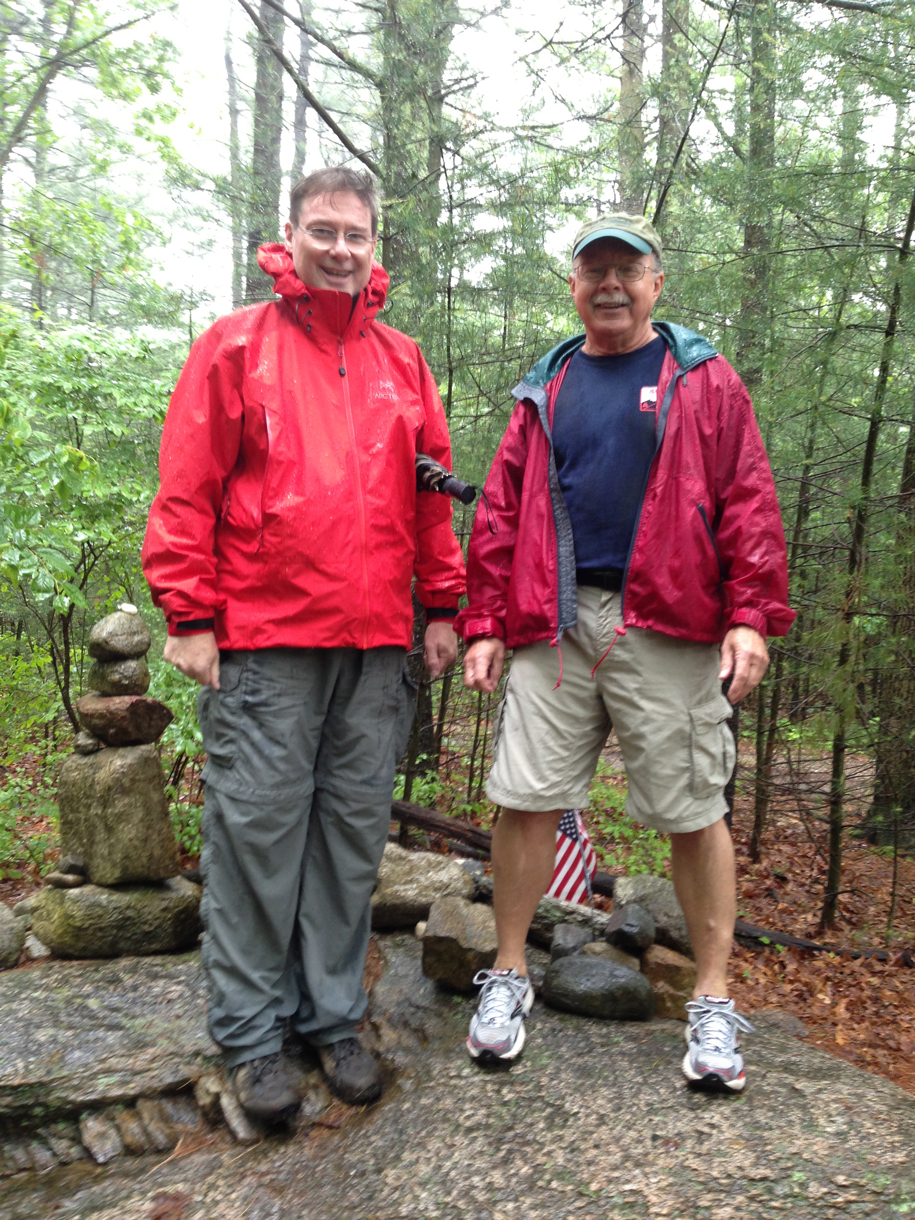 Stony Burk and Roy Wallen taking in the view at the summit (Photo: Emmett FitzGerald)

WALLEN: 91 years 17 days. We’ve had the youngest person to reach a highpoint, Natalie Smith is 11 days old and that was the state of Pennsylvania. Dave Johnson has done all 50 state highpoints in the winter. That is quite an accomplishment. Dogs on highpoints; that one always kind of cracked me up. The Pelligrinis for example, they’ve taken Ozzie up to 36 state highpoints. That’s a cool thing if you can do that. I think dogs have every right to go to highpoints just like people do.

FITZGERALD: Roy Wallen has a record of his own. Once he climbed the six New England state highpoints, Roy started going to the highest point in every county as well. 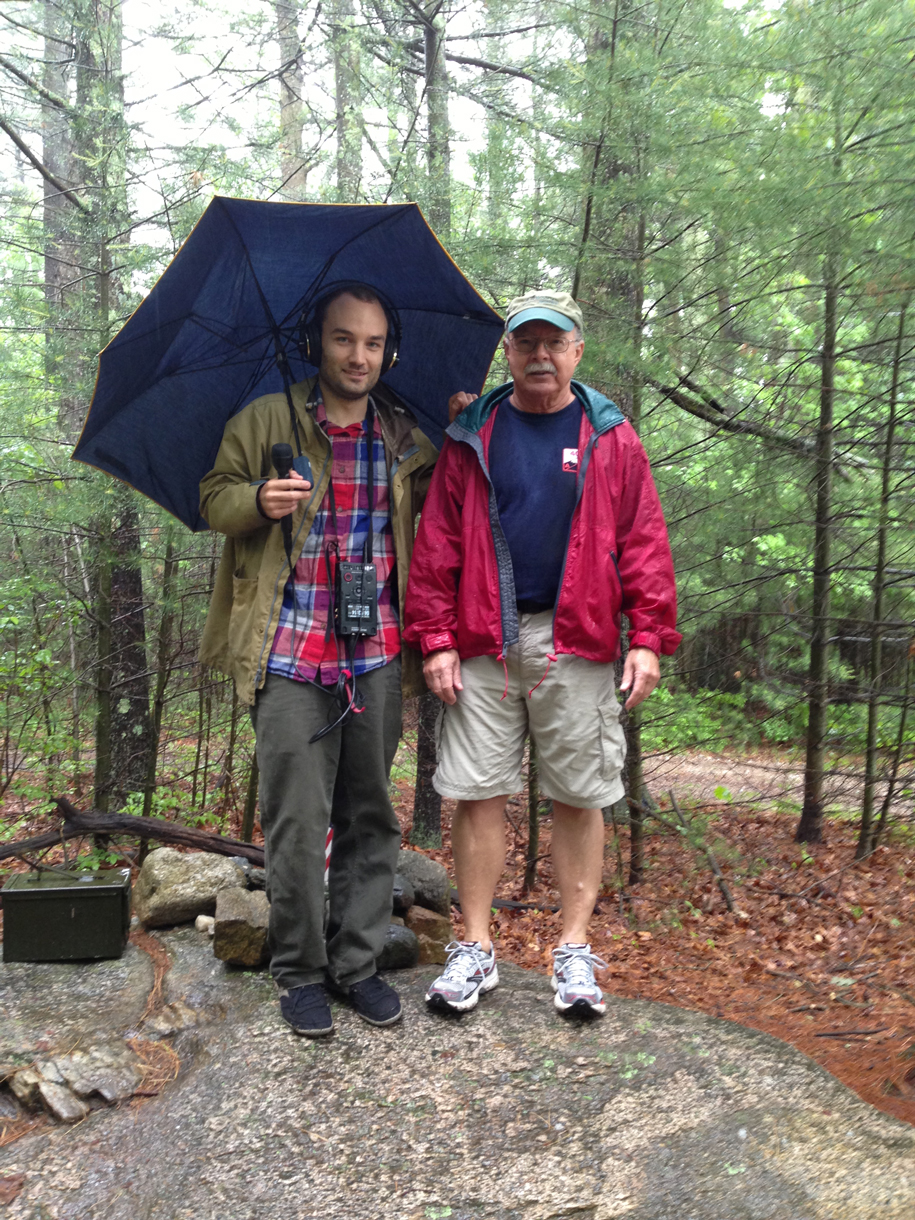 WALLEN: I’ve done all the New England highpoints, so if I’m going to do any new ones I’m going to have to venture further west.

FITZGERALD: When you start collecting counties as well as states, highpointing can get a bit out of control.

WALLEN: When we go on vacation we go so that I can go do a highpoint, either a state or a county high point.

FITZGERALD: What does your wife think?

FITZGERALD: It may be a little crazy, but Roy says highpointing provides an organizing principle for adventure.

WALLEN: To me the best part is it takes you places in the country where you’d never have gone otherwise. I probably wouldn’t have gone to Mt. Rushmore if I hadn’t had this driven obsession to go to Harney Peak, which was more important to me.

FITZGERALD: And while not every highpoint would make it into Lonely Planet, each one has something to offer.

WALLEN: They’re all kind of cool, they’re unique. Each one’s got its own flavor and special attraction.

FITZGERALD: Stony Burke closes up the ammo box and tucks it back among the rocks. Wet, cold, but not the least bit tired, we walk back to the car. Stony’s still got two serious peaks left on his list, Mt. Denali in Alaska and Granite Peak in Montana, and he tells me he’s not stopping any time soon.

WALLEN: Anytime I can get out on the road, and go to a highpoint, I’m going for it. I’m standing here in the rain today, I have no problem doing that.

FITZGERALD: As we say goodbye, Stony hands me a yellow Highpointers wristband and tells me I’m eligible to join the club. I’ve already climbed Vermont’s Mt. Mansfield, so only 48 states to go. But I don’t think I’ll be catching Stony any time soon.

For Living on Earth, I’m Emmett FitzGerald at Jerimoth Hill in Rhode Island.


Read more about the Highpointers Club on their website