Freeing the Arteries of the Planet 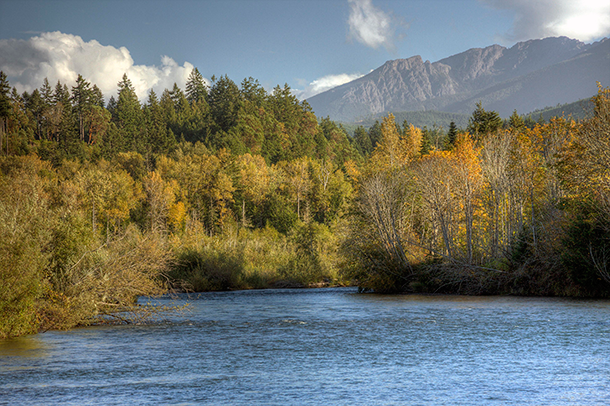 The Elwha River restoration project is part of a broader movement to dismantle dams and let rivers run their natural course freely. But there is still a hydroelectric boom in developing countries and as International Rivers Director Jason Rainey tells host Steve Curwood, that’s putting many of the world’s major rivers in crisis.

CURWOOD: The long awaited dam removal on the Elwha River in Olympic National Park is part of a growing movement to restore rivers that have been hurt by hydropower development. Not only are large-scale dams tough on fish like salmon, they also disrupt other parts of the ecosystem as a whole, and can even contribute to climate change, river advocates say. Jason Rainey is the Director of International Rivers and he joins us now to discuss the Elwha and the state of rivers around the world. Welcome to Living on Earth.

RAINEY: Thanks, it’s great to be here, Steve.

CURWOOD: So how possible is it to restore a salmon run on a river like the Elwha?

RAINEY: Well the evidence has already come rushing back in. As soon as the dams were breached, the very next run had thousands, tens of thousands of salmon of various species moving into waters that they had not seen in 70 years, so quite remarkable and epic. You need a remnant run to recolonize, but they did so naturally and willingly in this case. 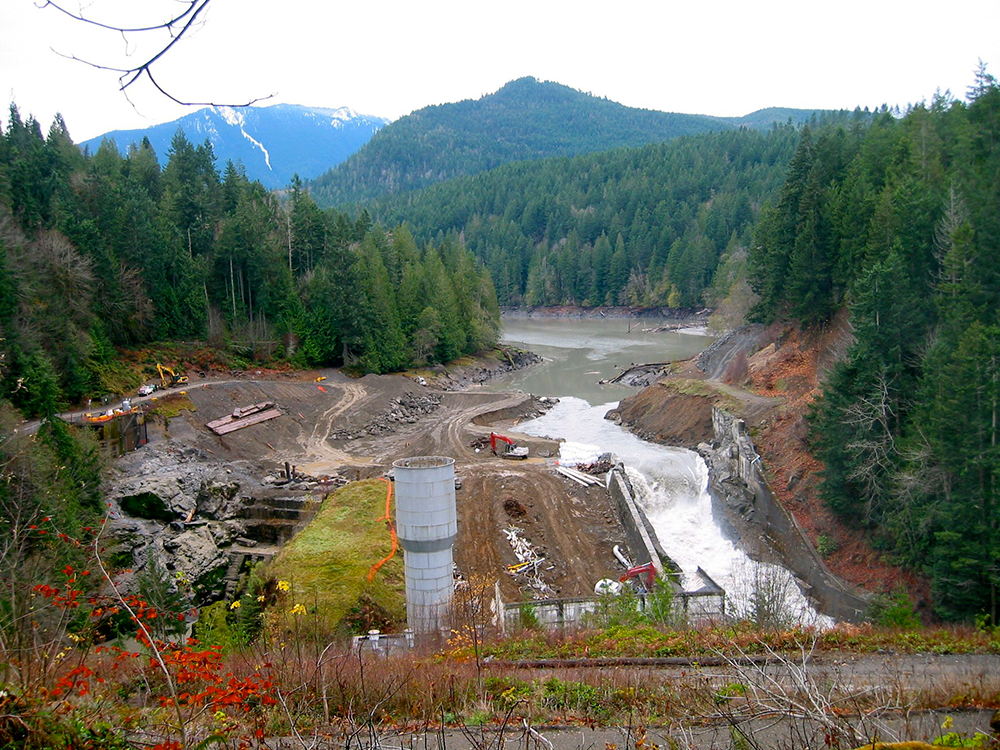 This dam on the Elwha was taken down as part of an effort to restore the natural flow of the river (Photo: Paul Cooper; CC BY 2.0)

CURWOOD: Interesting, because neither those fish or their grandparents or even their great-grandparents had ever made that run.

CURWOOD: How common is what's happening on Elwha? Where else are dams coming down here in America?

RAINEY: Yeah, well in the United States there have been over 1,000 dams removed, a lot of them small dams on the East Coast and eastern seaboard. The Elwha dams are the largest of two that are being removed, but others have been removed in the Pacific Northwest as well and have supported a rebounding of salmon populations and another ecological benefits. 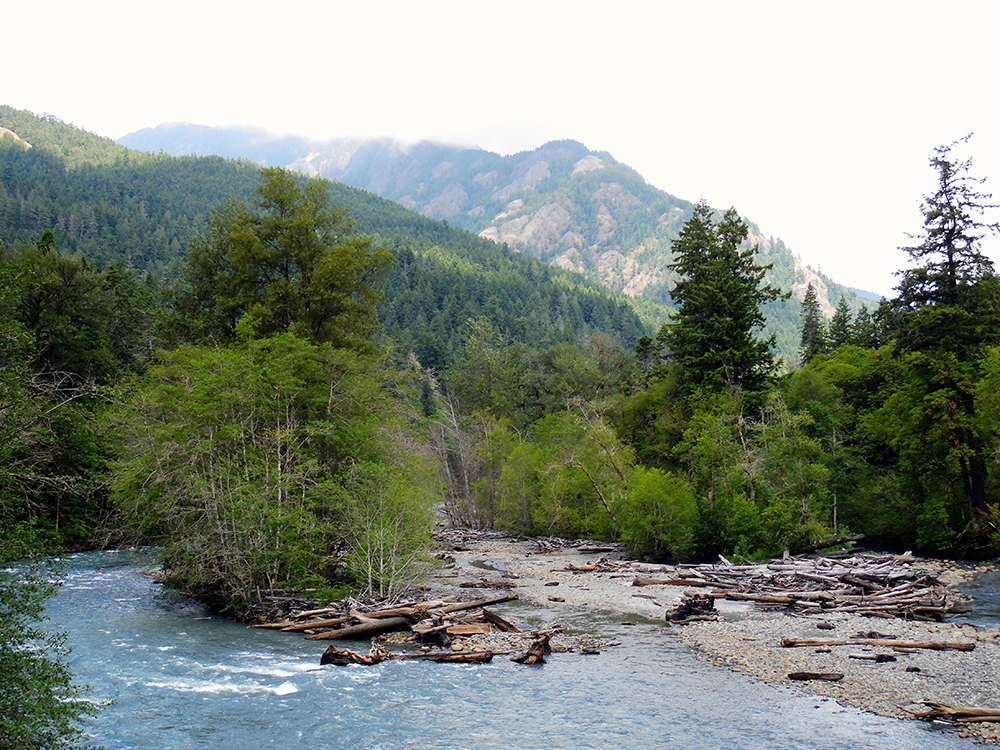 CURWOOD: What you think about the argument that we need hydropower because it's a renewable source of electricity?

RAINEY: Yeah well that's really the arena that I'm most engaged in these days at International Rivers. There's a hydropower boom happening globally that is unlike any other time before, and the pressure put on the world's rivers is great. My response to that question is that hydropower is really not a renewable resource in the most strict sense of the term—it's dirty energy in terms of what it does to polluting rivers and also polluting the climate with methane emissions, and it also fundamentally disrupts the ecological processes of rivers. And solar and wind are examples of true renewable resources that don't fundamentally alter sunlight or fundamentally change wind currents. Large hydrodams are very different story.

CURWOOD: Talk to me more about methane and hydropower. 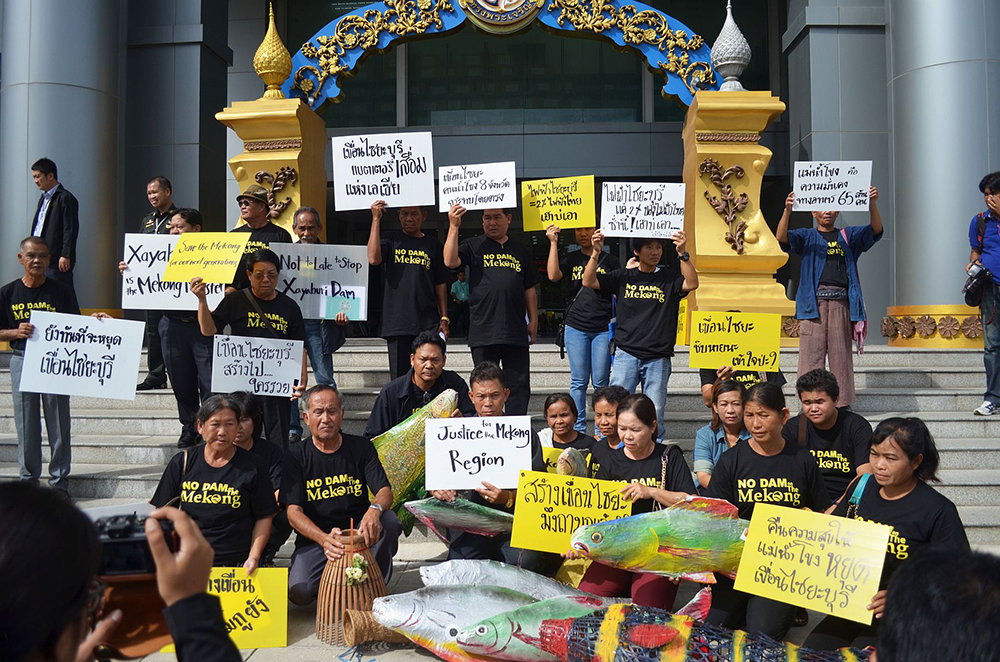 Thai villagers gather at the Thai Supreme Court to voice their opposition to a hydroelectric dam on the Mekong River. (Photo: International Rivers)

RAINEY: Yeah, well, particularly in the tropics when you dam a river and flood an area, the vegetation begins to decompose in anoxic conditions with low oxygen. And the chemical reaction, to just put it very simply, is one that produces methane and methane can be emitted from those reservoirs. There are examples of reservoirs in the Amazon, for example, that are four, five, seven times more climate impact in their emissions than a coal power plant of similar megawatts. So these can be very major contributors to our carbon imbalance. It's estimated that dams and reservoirs account for four percent of anthropogenic carbon emissions globally, which is equivalent to all of the airline traffic globally.

CURWOOD: Now, for a number of years the World Bank said it wouldn't fund ginormous dam projects like we're seeing in developing countries. Why are they coming back on the drawing boards? 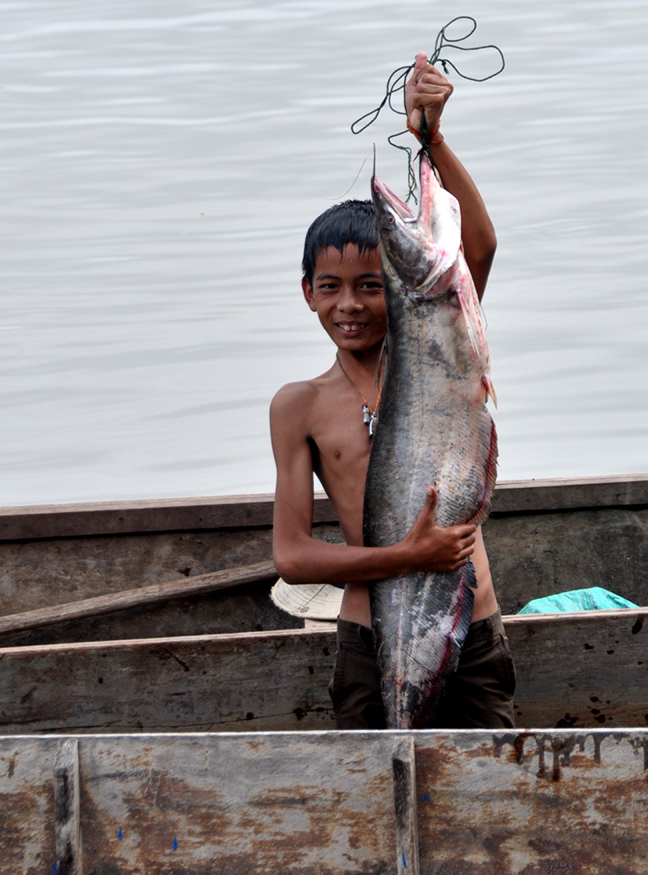 A boy holds a fish he caught on the Mekong River in Thailand. Critics say that the proposed Don Sahong Dam on the Mekong would be terrible for the fish population. (Photo: International Rivers)

RAINEY: Yeah, that's a great question. They did back away because of a calculus and recognizing that the impacts and the voice of concern from throughout the world was too great and that they couldn't build these projects to meet their environmental and social standards, and that they're also generally not great returns on investment. What's changed is that there are many, many actors involved in hydropower building today: China, Brazil, India, a whole multitude of other development banks that are forming. And the World Bank and the leadership behind it—primarily the United States—is interested in not losing out, so it's part of a broader geopolitical game, really, that the World Bank is getting involved in hydropower development again.

CURWOOD: Now, Jason, your organization, International Rivers, recently released an online platform for looking at the health of the world's rivers. How does that work? 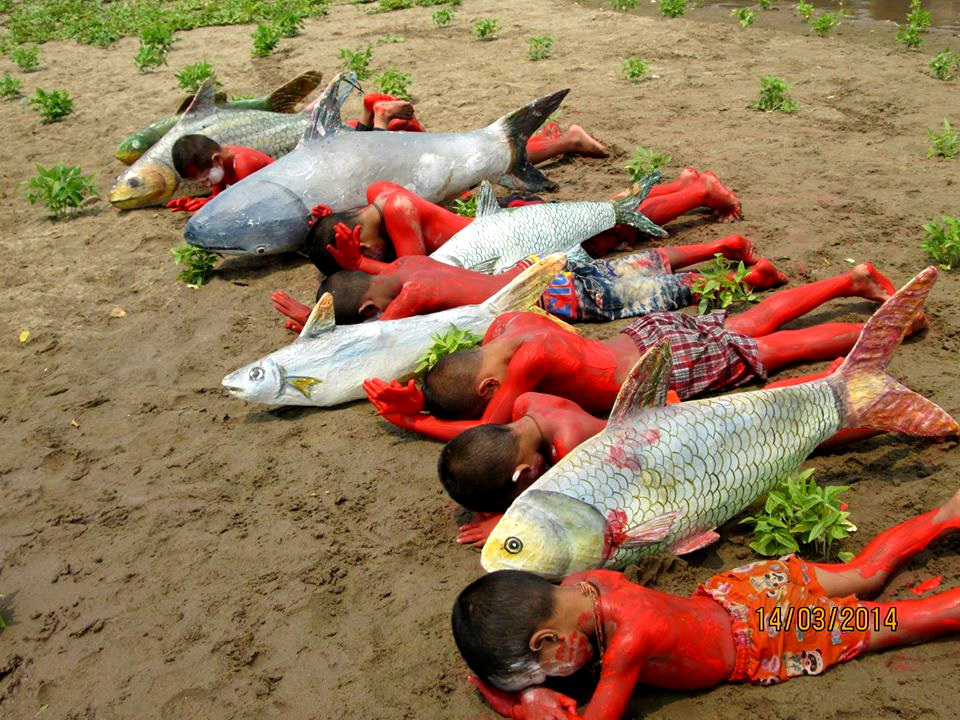 The Salween River in Burma is the largest undammed river in Southeast Asia, and these children want it to stay that way. (Photo: International Rivers)

RAINEY: Yeah, State of the World's Rivers is a Google Earth based platform, and it's a spatial database, which means we've compiled a lot of information about dams. And we've focused on 50 major river basins of the world. And we've also looked at a whole range of indicators of river health if you will, factors such as water quality, biodiversity, the fragmentation of the river, and we've put this all on an interactive map-based platform that allows you to search through these 50 river basins. You can see how the various basins ranked according to one another on these various ecological health indicators.

CURWOOD: So overall, how are the world’s rivers doing? 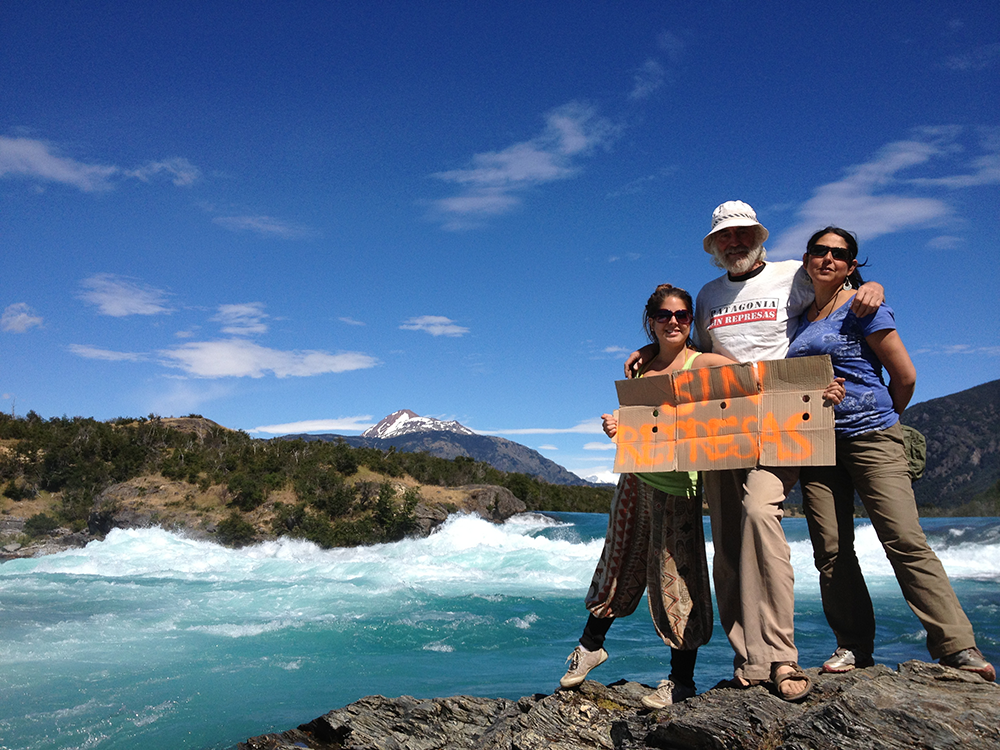 RAINEY: Well, the world's rivers are in grave crisis. We have over two-thirds of the world's rivers functionally impaired. They're not providing the range of services that they normally would, and we've known that for a long time. What this tool is intended to do is to start a conversation at the same level that is deserving of our climate crisis, which is that the state of the world's rivers is in grave peril, and there is no international institution, no panel of experts, looking squarely at the question of: what are the tipping points, how much is enough, can we dam all our rivers for the sake of hydroelectricity and still have viable societies here on Earth?

CURWOOD: What are we at risk of losing if the river crisis continues unabated, in your view? 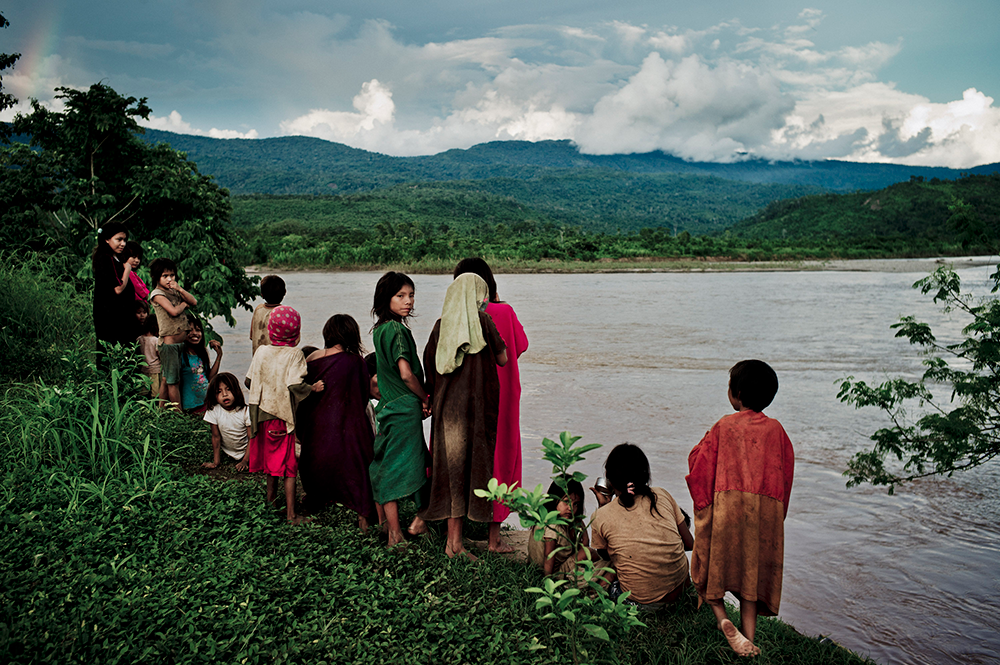 Peruvian children watch the Ene River in front of their village in an area that would be flooded by Pakitzapango Dam. (Photo: International Rivers)

RAINEY: Well, to begin with, we already know that we're losing more species in our rivers really than in any other ecosystem. The rate of species extinction is greatest in aquatic freshwater ecosystems, but beyond the animals that will never come back and the food web that they provide, we're really dealing with planetary cycles here. Rivers connect us to deltas and to coastal marine systems; they carve their way through the land and are the ribbon of life in dry and wet communities. So we really are on a grand experiment where we're seeing deltas shrinking and deltas are not just interesting ecological zones with a lot of birds. I mean, these are places where people live and are productive and can be used well, as in the case of the Mekong Delta, which provides rice for a great percentage of Southeast Asia. 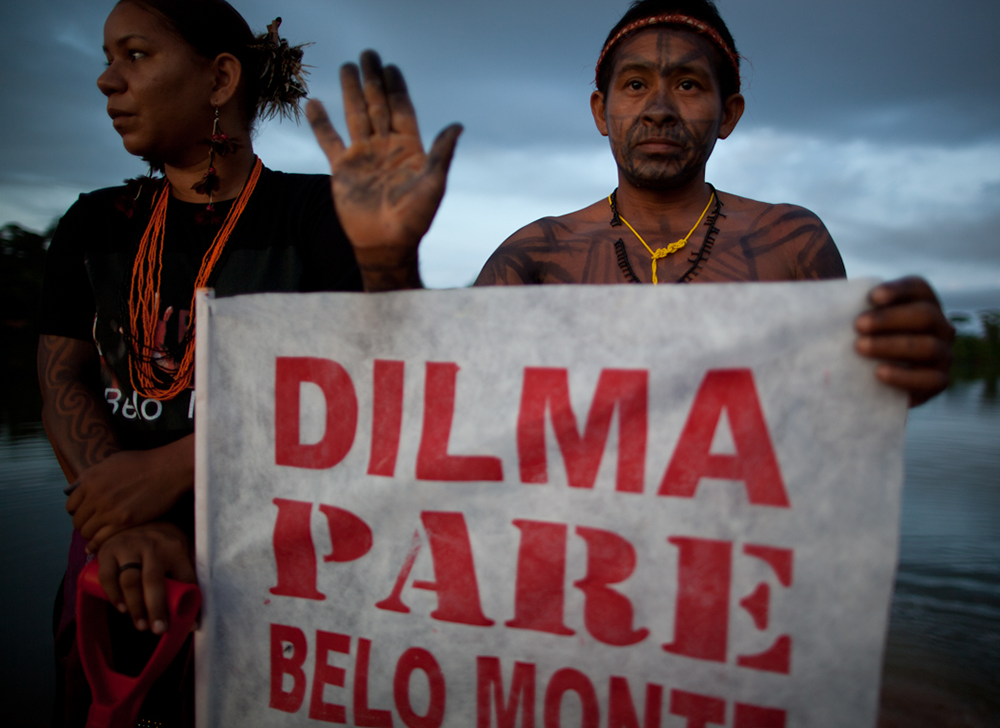 CURWOOD: Some use an analogy and call rivers the "arteries of our planet". If you were to go down that path, those arteries are getting clogged. Are we headed for some sort of metaphorical heart attack?

RAINEY: Yeah, it is a powerful metaphor. We are very much clogging the arteries of the planet, and in many cases, we're doing so under a very simple and false paradigm that says, well, you know the lungs of the planet are ailing—the climate is ailing; the atmosphere is out of balance—and the alternative right now is we'll just dam our way to some sustainable future. 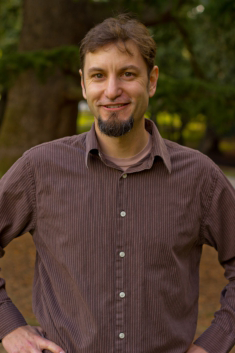 RAINEY: And it's really, it's an absurdity from an ecological perspective to think that that's possible and that is exactly what we're confronted in nation after nation and region after region throughout Latin America, Africa and Asia, regions that have very legitimate needs for energy access and development, but are doing so by pushing a mega-dam energy agenda. And that's - it's just a dangerous course for the planet.

CURWOOD: Jason Rainey is Executive Director of International Rivers. It's been my pleasure to speak with you.

RAINEY: Thanks so much, Steve.

The State of the World’s Resources Map