Erin Lowery is a fisheries biologist for Seattle City Light. His job is to figure out where salmon are spawning on the Skagit River and then make sure his employers’ dams release the right amount of water to allow the eggs to incubate safely. (Photo: Ryan Hasert/ EarthFix)

Glaciers in the Pacific Northwest are essential for the region’s drinking water, hydropower and salmon survival. But as EarthFix’s Ashley Ahearn reports, disappearing glaciers make the Northwest uniquely vulnerable to the effects of climate change.

CURWOOD: Well, we stick with a watery theme, the frozen water this time of the glaciers of Washington State. The Evergreen State has more glaciers than any other, except Alaska. These ice fields are breathtaking to look at, exciting to climb, and a vital part of the water supply in the Pacific Northwest. But these days they’re melting away. From the public media collaborative EarthFix, Ashley Ahearn has our story. 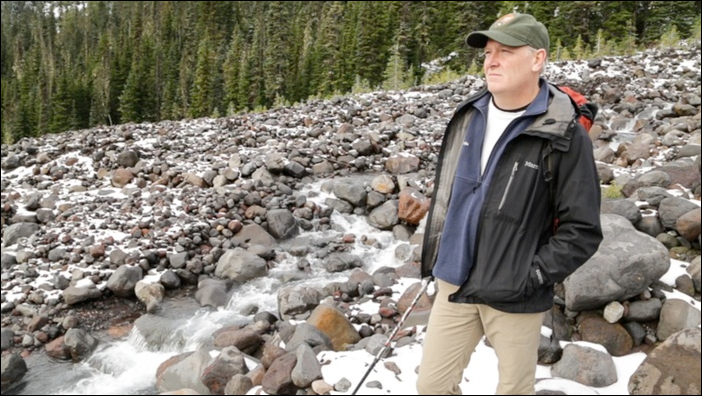 Jon Riedel, standing just below the Easton Glacier of Mount Baker. He has been monitoring glaciers for the National Park Service for more than 30 years. He's documented the rate at which glaciers in the North Cascades have been shrinking in recent years. (Photo: Ryan Hasert/ EarthFix)

AHEARN: Guess how many glaciers feed into the Skagit River? Just take a guess. Answer: 376. No joke.

AHEARN: Jon Riedel is hiking up to one of them, on the slope of Mount Baker in Washington’s North Cascades.

RIEDEL: We’re headed up along Rocky and Sulfur creeks and then we’re going to turn and follow Rocky creek up toward the terminus of Easton Glacier.

AHEARN: Riedel’s been studying glaciers with the National Park Service for more than 30 years. The sheer number of glaciers in this region sets us apart from the rest of the country, but it also makes us uniquely vulnerable to the effects of climate change. Glaciers are key contributors to drinking water supplies, hydropower generation and salmon survival in the Northwest.

Riedel pauses just shy of 4,000 feet elevation in the middle of a field of boulders. No glacier in sight.

RIEDEL: If you were here in 1907 you’d be looking right at the terminus of the glacier.

AHEARN (on tape): And now where is it?

RIEDEL: Now it’s around the corner. You can’t see it. The terminus is closer to 4,400 feet and probably at least a kilometer horizontal distance.

AHEARN: Photographs from the 1800s show this whole valley covered in ice. But that’s changing. Glaciers in the North Cascades have shrunk by 50 percent since 1900. Riedel says throughout history, glaciers have advanced and retreated over these mountains hundreds of times. But now it’s different.

RIEDEL: The glaciers now seem to have melted back up to positions they haven’t been in for 4,000 years or more so we’ve kind of gone beyond that natural scale of variability.

AHEARN: Glaciers provide billions of gallons of water to rivers in the Northwest. But it’s not just about the supply - that water arrives when demand is high.

RIEDEL: Having glaciers provides stability to our water supply. So, you get into the mid-late July and the snow is melted out of the mountains, if it weren’t for glaciers, our stream flow would drop pretty dramatically. So the glaciers are providing this meltwater at a time of year when we get no rain, when the snow’s gone, in other words, when we need it the most.

AHEARN: Perhaps no one understands that better than the people in charge of operating dams for hydropower.

RAYMOND: My name is Crystal Raymond and we are at the base of Ross Hydroelectric projects.

AHEARN: Ross dam towers 450 feet above us as we motor up Diablo Lake in Washington’s North Cascades. Raymond works for Seattle City Light. The utility operates three dams on the Skagit River that provide about a quarter of the power for the city of Seattle.

RAYMOND: So we are unique. There are not too many dams that operate in a place where some of the runoff for the project is coming from glaciers.

AHEARN: At the hottest, driest times of year, glaciers are the biggest source of water for some of the streams that feed this hydropower facility. It’s Raymond’s job to figure out what to do when the glaciers are gone. She says Seattle City Light will need to change how it stores water above the dams, maybe expanding the reservoirs to capture more rainwater and save it for those late summer months. Helping customers cut back on energy use is also going to be key. By the time millennials are retiring, summer hydropower production in the Northwest is expected to be down by roughly 15 percent. But Raymond is an optimist.

RAYMOND: It isn’t hopeless. There’s certainly a lot of uncertainty, but we know enough now to start getting prepared and with time we’ll know more, but the sooner we start the more likely we are to reduce the impacts. And there’s no time like the present.

LOWERY: Right there you can see the dark shape, right there in the water. So it’s sort of near the edge of the redd. So that’s a Chinook salmon sitting on the redd.

AHEARN: Lowery is a fish biologist for Seattle City Light. The utility is required to manage its dams to protect spawning fish. Too much water released from the dams and the redds will get washed away. Too little, and they’ll be left high and dry. This mama Chinook’s tail is ragged and white where she’s used it to shovel away the gravelly riverbed to make room to lay her eggs. Now she’s guarding them.

LOWERY: She’ll sit on that redd and defend it until she loses energy and dies.

AHEARN: And Erin Lowery will do his best to defend her.

AHEARN: He and his team record the location of the redd and how deep the water is there. Lowery says, glaciers aren’t just important because of the water they provide in the summer. It’s the temperature. Glacial melt flows into warming rivers like dropping an ice cube in a glass of lemonade. No glaciers means warmer rivers, and that’s bad news for salmon. 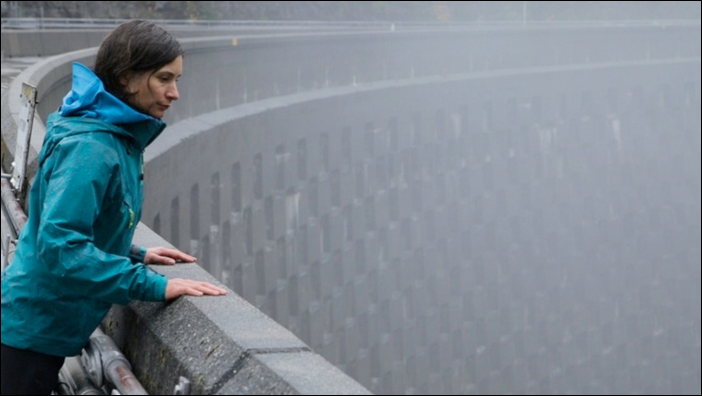 Erin Lowery is a fisheries biologist for Seattle City Light. His job is to figure out where salmon are spawning on the Skagit River and then make sure his employers’ dams release the right amount of water to allow the eggs to incubate safely. (Photo: Ryan Hasert/ EarthFix)

LOWERY: We start to affect, not only the fish themselves, but it can have a negative effect on their eggs, but in rivers that are dominated or have a glacial component to them, we see reduction in temperature, which is key to cold water fish like salmon.

AHEARN: Lowery says it hasn’t come down to a choice between fish or power yet. But he loses sleep thinking about that possibility some day.

LOWERY: I think as we move forward, I mean, it’s going to be a hard look at how we manage flows in the river with a changing climate, with a reduction in glaciers and snowpack because people are moving to the Puget Sound constantly and they’re all going to need electricity.

AHEARN: Scientists aren’t sure exactly when the glaciers will disappear. It could be within a few decades. It could be by the end of the century. But when they’re gone, they’ll be missed.

CURWOOD: Ashley reports for the public media collaborative, Earthfix. There are videos of glaciers, salmon and dams at our website, LOE.org.


EarthFix's "What Climate Change Means For A Land Of Glaciers"