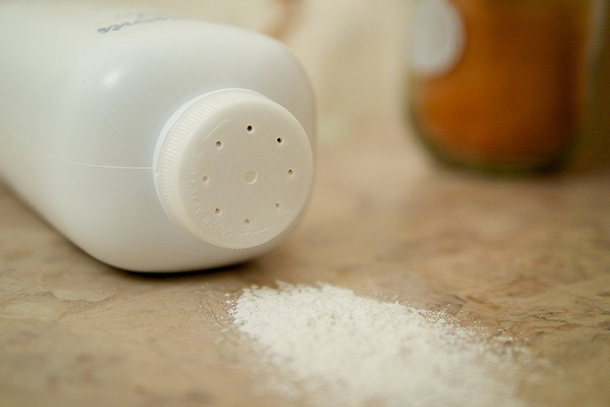 Many women use talcum powder as part of their daily feminine hygiene routine. But epidemiological studies establish a correlation between talc use in the female genital area and ovarian cancer, and call its safety into question. (Photo: Austin Kirk, Flickr CC BY 2.0)

Talcum powder has been used for decades as a lubricant, in cosmetics and for personal hygiene, and for diapering babies. But studies going back years have suggested a link between talc and ovarian cancer. Now women with this cancer are suing Johnson & Johnson, claiming the company kept quiet about the product’s putative dangers. Myron Levin of the public health focused news-site FairWarning.org, discusses the lawsuits and the possible risks of talc with host Steve Curwood.

CURWOOD: Now, think talcum powder, and you’re likely to picture chortling babies and smiling moms changing diapers. Nothing seems more safe and wholesome, and indeed, many women use talc daily as well, for feminine hygiene and after showering.

LEVIN: Shower to Shower, marketed to women...a sprinkle a day keeps odor away...and Johnson's Baby Powder, which is a more than a 100-year-old product, one of the legacy original products of the Johnson & Johnson Company.

CURWOOD: That’s Myron Levin, founder of FairWarning, a news site that focuses on public health, safety and environmental questions. He’s just written an article about long-held concerns about talc’s possible association with ovarian cancer, and the hundreds of lawsuits filed on behalf of women or their survivors against Johnson and Johnson. Myron Levin joins us now. He says these studies go back a long way.

LEVIN: Yes, at least to the early 70s when a British study, actually 1971, reported that an analysis under microscope of 13 ovarian tumors found talc particles in 10. 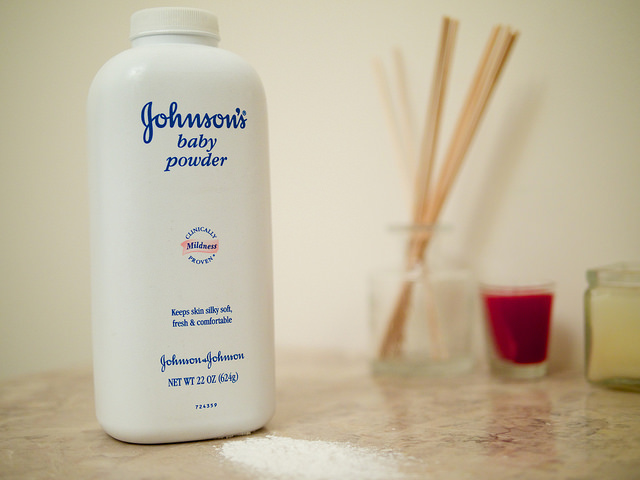 Johnson & Johnson asserts that because there is no proven mechanism for how talc might cause ovarian cancer -- only theories -- it cannot be held liable for failing to warn women of the potential risk, despite research that dates back decades. (Photo: Austin Kirk, Flickr CC BY 2.0)

CURWOOD: And since then there've been a number of studies in the US and in Europe as well I gather.

LEVIN: Yes that's true there've been a number of studies beginning in 1982 and many others to follow which not universally but in most cases certainly have found that women who used talc for feminine hygiene have higher rates of ovarian cancer than women who don't, on average about a 35% higher risk.

CURWOOD: That's a significant risk if you use talcum powder, but those studies don't offer a mechanism for this or prove that it is causal so what are the ideas here?

LEVIN: Well the idea is that the talc can travel through the genital track to the ovaries and that the inflammation that then is caused by talc particles being deposited there leads to cancer.

CURWOOD: Talk to me, Myron, about the statistics on ovarian cancer and what proportion could possibly be linked to talc?

CURWOOD: So this is an issue that goes back some 40 years. Why is it coming to the fore today?

LEVIN: Well, as you know, much of what constitutes our regulatory system in this country now is the civil courts. Decisions probably that should be made somewhere else are resolved by people filing lawsuits against major companies and scientists and experts being arrayed on both sides to argue about what the evidence is, and that's why this is happened. There was a lawsuit that was tried to a verdict in 2013. A woman named Deane Berg who had ovarian cancer asserted that this caused her use over many years of talc powder for feminine hygiene sued Johnson & Johnson. The jury found that Johnson & Johnson was liable for not warning of the risk of ovarian cancer, but strangely awarded no damages to Deane Berg. 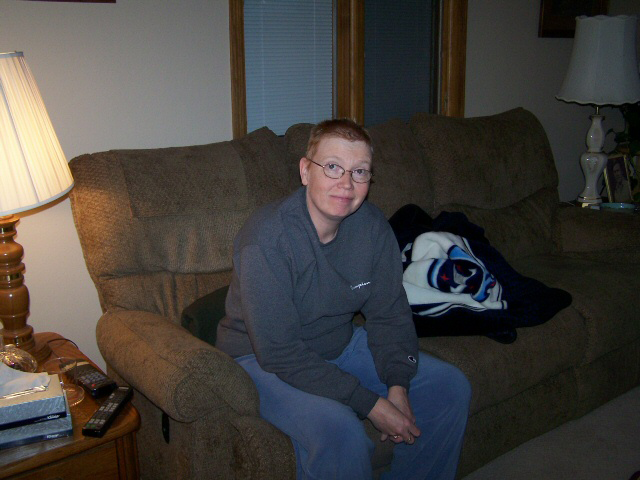 Deane Berg, an ovarian cancer survivor, filed a lawsuit against Johnson & Johnson in 2013 for negligence: failing to warn consumers of the risk of ovarian cancer. (Photo: courtesy of Deane Berg)

CURWOOD: What you make of this verdict?

LEVIN: It's kind mystifying, isn't it? She was stage III, her prognosis was very bad, but she's doing very well and so she didn't die, OK. But she certainly suffered financial losses from missed work, from medical bills, tremendous amount of pain, some permanent loss of feeling in her hands and feet, some hearing loss, and so if you find that they should've warned her and they didn't you would think that they would give her some money. We tracked down the jury foreperson and asked her about this, and she just said that we thought they should have put a warning on but we did not believe that the medical evidence was so persuasive that we concluded that her cancer actually was caused by her use of talc.

CURWOOD: How many cases are now pending against Johnson & Johnson by women who feel that they were exposed to things that led to ovarian cancers as a result of using the J&J products?

LEVIN: There are in the neighborhood of 700, most of them in St. Louis and in New Jersey where Johnson & Johnson is headquartered. But the numbers are still going up, so there probably will be more.

CURWOOD: How are folks bringing these claims addressing the mechanism question?

LEVIN: Well, they did offer theories about how it happened in the Berg case, that's the only case that's been tried but proving things to a scientific certainty is not necessarily required in a civil trial. It has to be more probable than not in the minds of the jury that harm was caused by the defendant. So even if that isn't proven to the satisfaction of Johnson & Johnson or to many scientists, it doesn't mean that they're home free. 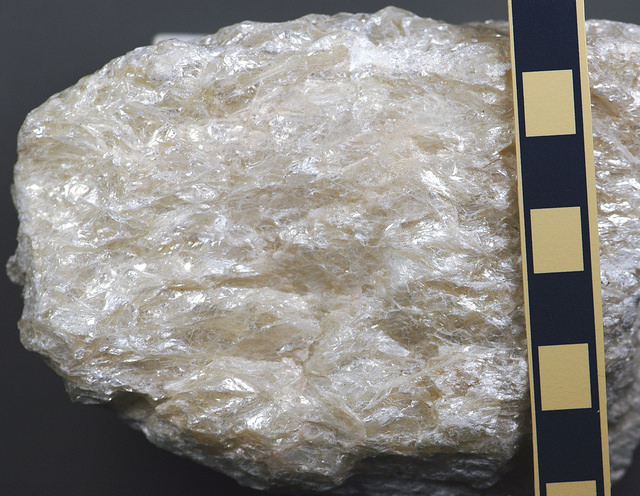 Talc is the softest-known mineral, softer even than the human fingernail. While asbestos is often found in talc deposits, Johnson & Johnson claims that asbestos is not present in its talcum powder products. (Photo: James St. John, Flickr CC BY 2.0)

CURWOOD: What's Johnson & Johnson's argument when it comes to this association?

LEVIN: Johnson & Johnson says talc powder does not cause ovarian cancer so we had no reason to warn. They say that there's no biological mechanism for causation proven and the types of studies generally that found a higher risk introduced what's called recall bias because people who have an illness or any kind of adverse health outcome tend to number of exposures or habits or things they did better than people that are healthy, so it makes it appear in other words that more people who have ovarian cancer use these products than didn't.

CURWOOD: What regulatory bodies have determined that talc may in fact be carcinogenic?

LEVIN: IARC, the International Agency for Research on Cancer which is part of the World Health Organization considered this in 2005 and 2006 and came to a finding that talc was what they call a ‘2B possible human carcinogen’ when used in this manner. There's a lot of products that are in that category and so the industry has tried to sort of dismiss this as being insignificant, but they were very, very upset when this happened. Basically what IRC said was that there's a remarkable consistency of these epidemiological studies. On the other hand confounding factors and biases can't be ruled out. But other agencies have considered this and decided to make no finding because there wasn't enough evidence.

CURWOOD: And what attracted you to this particular story?

Myron Levin is the founder and editor of FairWarning, a nonprofit (501 (c) (3)) investigative news organization that “focuses on public health, safety and environmental issues and related topics of government and business accountability.” (Photo: courtesy of Myron Levin)

LEVIN: You know, we're in a world of very ominous sounding, unpronounceable chemicals. What could be seemingly less ominous than talc? It's only four letters, we put it on babies’ bottoms, it's in all manner of industrial products as well as consumer products that are used up close and personal. You just sort of have no idea if you're the ordinary consumer that there might be a risk here.

CURWOOD: Myron Levin is founder of the investigative journalism site FairWarning, thanks so much for taking the time today Myron.

CURWOOD: There is more information about the suspected links between talc and ovarian cancer, Johnson and Johnson’s statement and Myron Levin’s reporting at our website, LOE.org