Elephant Matriarch Puts Her Foot Down

On a blistering day at an African watering hole, Living on Earth’s Resident Explorer Mark Seth Lender witnesses a confrontation between basking crocodiles and a small herd of elephants seeking to quench their thirst.

CURWOOD: There’s a savage drought in parts of southern Africa, and that’s putting extreme stress on wildlife. But our Resident Explorer, writer Mark Seth Lender discovered that at a waterhole in Zimbabwe, even when water is scarce, animals have learned to keep the peace.

LENDER: The crocodiles are lying in a circle at twelve, at five, at nine o’clock. They surround the only waterhole with water in it, an immobile, unbreachable line. Just off center a hippo lounges half-imbedded in the mud. He humps up out of the water like a boulder.

It is late afternoon.

The sky is white.

The heat is beyond description. 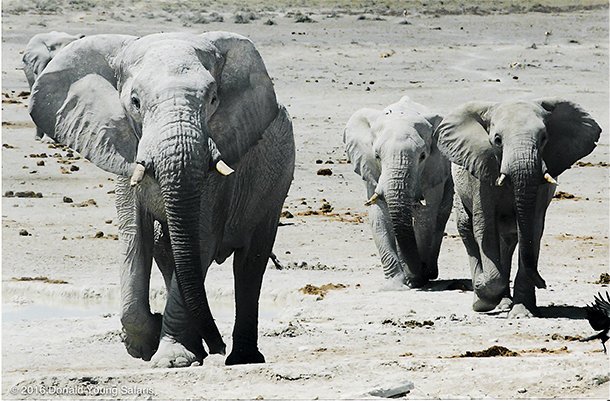 The elephant herd heads for the watering hole at a run (Photo: courtesy of Donald Young Safaris)

Out of the wavy distance a small herd of elephants appears. They already know there is water here but as the smell of it reaches them, they break into a silent dumbling run. At the bottom of the slope, they hold back. They have seen the disturbing clockwork and there is a baby with them, only the one. He looks out from between the legs of the others, sheltered by mothers and aunts. They stand like tree trunks, waiting, despite their thirst, which by now is all they can think about..… except for the crocs.

The matriarch breaks off from the herd. She walks up to Five O’clock and stops. Straightens her neck. Lifts her chin. Looks at the crocodile as if over a pair of pince-nez; a look intended as a warning which the crocodile… ignores.

A foot that is half a meter in diameter lands three minutes on the gauge from his face.

The matriarch steps back. She tilts her head and looks at him sideways...

A layer as fine as chalk settles on his nostrils, and jaw, and the hooded sockets of his immovable eyes. 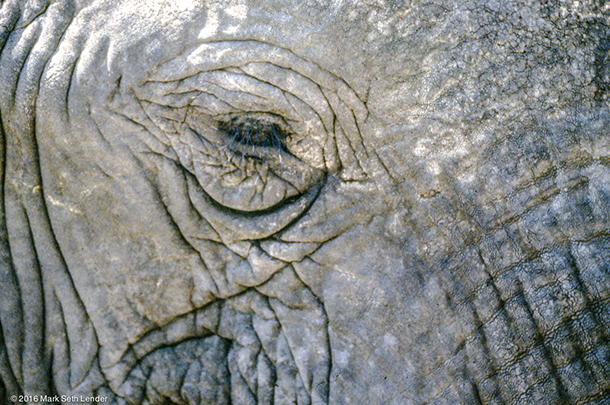 When a crocodile refuses to move, the elephant matriarch puts her foot down with a loud thump. (Photo: Mark Seth Lender)

This time the distance is measured in a clock-tick and the crocodile’s big boney skull bounces, raising its own drab puff of clay.

The Matriarch looks down.

And the crocodile… rises (just enough to let him move) and slips, into the water, slowly. Very… slowly. His tail, sculling side to side pushes him away from the banks towards the center, preferring the considerable risk of hippo to the imminent threat of Elephant.

The matriarch continues in her deliberate precession. Step by step she clears out Nine, then Noon, and the elephants unfurl their trunks and drink their forty gallons each of what passes for water in this fetid season of the year in southern Africa. One of the females stands with the baby, and he also drinks and bathes as well as he can and they spray the muddy stuff over themselves, and him, and then go back the way they came under the red dust sun, that is hot, and unforgiving as it will be for at least another month of hardship all around. 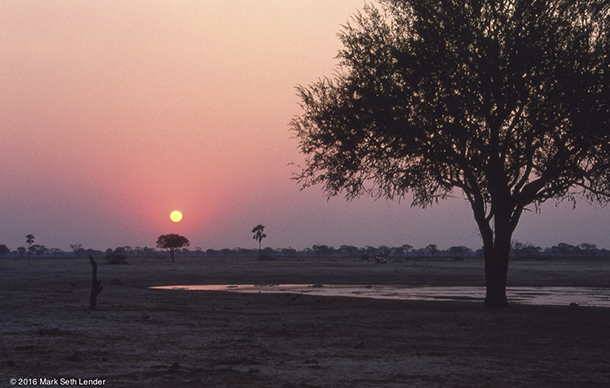 The land begins to cool after a hot, dry day in the African desert (Photo: Mark Seth Lender)

The land begins to cool.

The crocodiles retake the positions they had before, marking their ancient place in time.

Again, the danger is them.

CURWOOD: Writer Mark Seth Lender. There are some of his photographs of lumbering elephants at our website, LOE.org.


Mark's fieldwork in Africa is conducted with Donald Young Safaris