The Monarch Needs More Than Milkweed 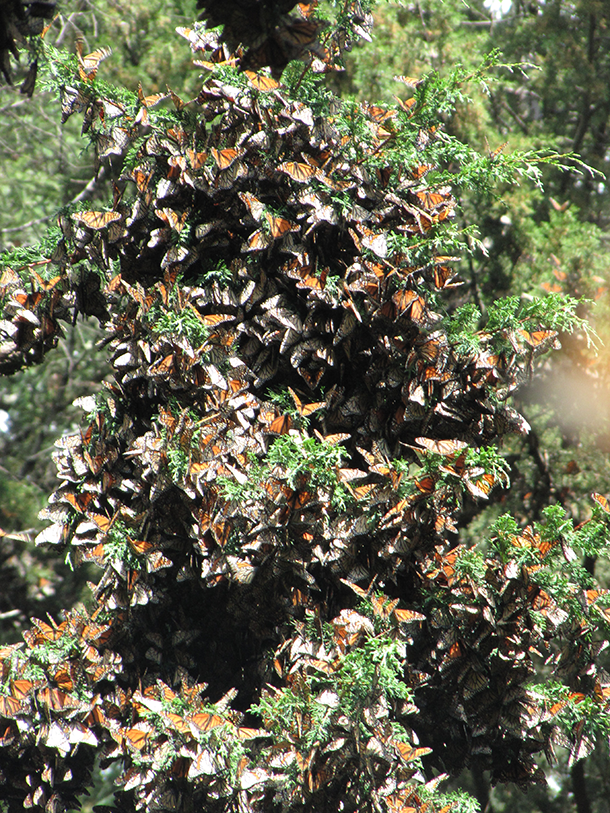 The past decade has seen steep declines of the Monarch butterfly populations. To save this iconic insect, many people have focused on protecting milkweed, the primary source of food for Monarch caterpillars across North America. Cornell biologist Anurag Agrawal recently studied the various drivers of the species’ decline, and tells host Steve Curwood that to save the Monarch, it will need more than just planting milkweed.

CURWOOD: Hot on the heels of that legal push to protect this iconic insect comes a study that throws new light on the many threats that face the butterflies on their multi-generational migration from Mexico to the US and Canada and back. And this new study questions a key conventional wisdom about the role of pesticides and milkweed in the decline in Monarch numbers. It comes from a team led by Anurag Agrawal, a professor of Ecology and Evolutionary Biology at Cornell University.

AGRAWAL: Milkweed has been declining, certainly in the Midwestern USA where agriculture is most prominent, and with the increased use of herbicides and genetically modified crops that are tolerant of those herbicides, the amount of milkweed in those agricultural fields has declined. It certainly seemed quite logical that milkweed limitation could be playing a role in the population trends and the downward spiral of the monarch butterfly. Nonetheless, we were compelled to try to take a rigorous look at the data that are out there to ask the question, is that what's really going on.

CURWOOD: So what did you do? 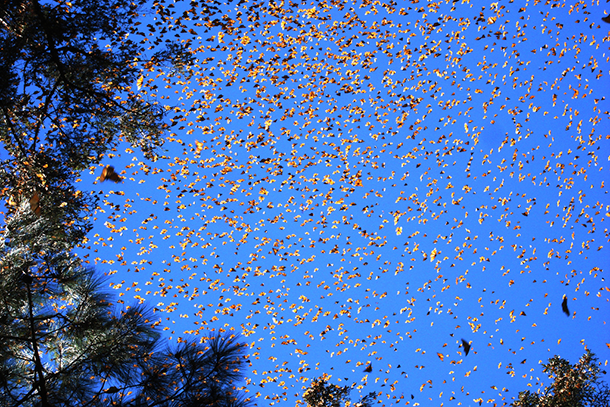 Over winter, monarchs usually coat the sky in the valleys of Michoacán, Mexico. But their numbers have been declining. (Photo: Luna Sin Estrellas, Flickr Creative Commons 2.0)

AGRAWAL: What we did was we really tried to put the pieces together, and what I mean by that is the monarch butterfly has a very complex annual migratory cycle. So in the fall they fly all the way down to Mexico, rest there for four months, fly back to the USA and then lay eggs in Texas and Oklahoma. From there, their offspring, or the next generation, flies up to the Midwest and the northeastern USA and Canada where they breed for two to three more generations.

We're very very fortunate to have many different datasets where citizen scientists and conservation organizations have been tracking the monarch populations, and it's one of the wonderful resources where people had the foresight 25 years ago to start these monitoring programs. By putting those different datasets together we were able to ask, “where is the weak point in the annual migratory cycle. Where is it that they are doing the worst?” and can we then take that information and infer what the problem might be.

CURWOOD: So, of course, we want you to give us the answer.

AGRAWAL: Yeah. What's very clear is that in Mexico, the highland overwintering grounds, the Monarchs cluster on these fir trees at about 10,000 feet elevation, their numbers have been declining over the past 20 some years. When they fly to the southern USA, we looked at the data, their numbers there have also been declining. But when we look at the next several generations of each cycle in the Midwestern USA, in the northeast, and as they fly south in the fall, none of those four independent datasets show any population decline over the past 22 years, and so that suggests to us that the monarch populations are building up each summer and the only time when they really rely on milkweed is the summer months when they are breeding, laying eggs, and the caterpillars only eat this food, and yet at the end of that time when they are done eating milkweed, their populations seem to be somewhat stable over the past 25 years. They then begin their southern flight. By the time they get to Mexico, the numbers are down again. So on the one hand that presents a very important finding. The decline seems to happen after they're done feeding on milkweed. It also presents the conundrum: why is it that their numbers are down when they get to Mexico given that they weren't down to begin with in the beginning of the fall?

CURWOOD: So, let me see if I understand this correctly. The problem area then is in some place between the southern United States and Mexico and the overwintering? 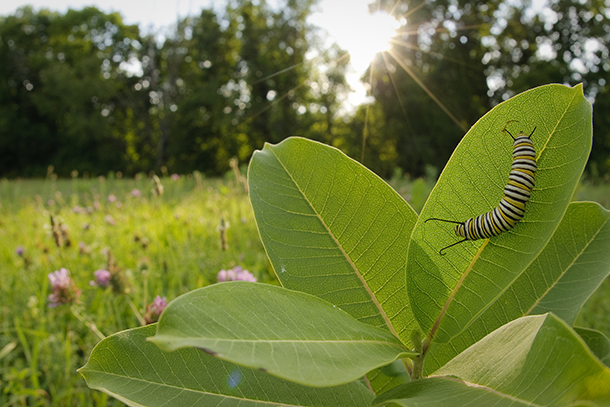 AGRAWAL: The problem area - we don't exactly know and it spans several thousand miles which make this a bit of a gnarly problem, but it would appear that the problem has to do with being able to complete that flight successfully and establish in Mexico. From my perspective, that suggests I guess one of three potential problems.

They need flower nectar, the nectar produced by flowers, to power their flight to Mexico and it's entirely possible, there's been some work in the literature suggesting that the amount of flowers that are available for them to sugar up on, on that several thousand mile journey, have been reducing. If that's the case, they don't have enough energy and may not make it.

Secondly, they're traversing these tremendous distances and landscapes and they need those landscapes to be free of obstruction of insecticides, of poisons, etcetera, and it very well may be the case that they're not finding clean and healthy landscapes to do the migration.

Lastly, this is the concern for for several decades since the overwintering grounds in Mexico discovered in 1975 and we know they are highly highly restricted, 10 to 12 mountaintops, summing to the size of about New York City, that all of the Monarchs, the hundreds of millions of Monarch butterflies overwinter on these very special restricted dozen mountaintops. And there has been a consistent pressure on those forests in terms of logging and other human activities that have degraded those sites. It's been very difficult to pinpoint the impact of that forest degradation on the Monarchs, but it's quite clear that is substantial and despite best efforts to reduce logging and reduce those activities, some of it continues. And so I think it's the flower resources available, the uninterrupted and clean landscapes and the overwintering forests that may be contributing to their decline. 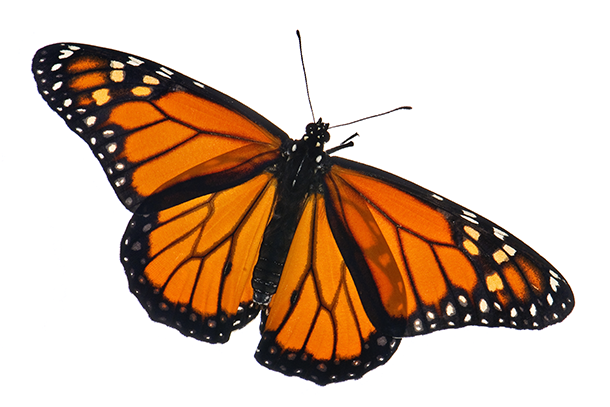 CURWOOD: And milkweed loss doesn't appear to be the culprit you're saying?

AGRAWAL: Our analysis of the data suggests that if milkweed loss is contributing, it's contributing in some complex way. What I mean by that is let's say with the impact of insecticides on Monarchs that are perhaps sublethal or just kind of making them slightly sick, and they're not finding enough host plants, together with, say, being slammed by a particular weather event, that could be causing their declines. But if we were to look across the 22 years that we have, is there a signal that reduced host plant alone is important for these butterflies, that signal does not exist, and I'd say its remarkably consistent across several different datasets.

CURWOOD: Hmmmm. Now, what about Mexico itself? You say of course the habitat, the dozen or so mountains there, that habitat has been degrading. How much habitat has been lost over these last 22 years?

AGRAWAL: Well over half of the Monarch...potential Monarch overwintering habitat I believe has been lost since the 1950s and 1960s and basically using aerial photographs. This is a very important study conducted about a decade ago, it was shown that a lot those habitats had been lost. There are certain ranges where Monarchs no longer go to overwintering, partly because they have been developed or the forest has been cut down. There were protections put into place by the Mexican government beginning in 1986, and since that time there have been various improvements or attempts to further protect the area. It's called the Monarch Butterfly Biosphere Reserve and its now a world heritage site has other important distinctions for its conservation value. But there's been a high-level habitat destruction and it continues, it continues at a relatively slower rate than in the past, but it continues.

The stages of a monarch butterfly’s emergence from is pupa (Photo: Ellen Woods)

CURWOOD: What role does mining play in this?

AGRAWAL: Mining plays some role and recently in the news, there was a New York Times article about this. There are deals being made and prospects of mining very close by to the Monarch Butterfly Biosphere Reserve, and so that's something that has historically played a role and I think there hasn't been a lot of mining recently but it's again on the horizon and it's something we really need to look out for to make sure the government's making the right decisions in terms of allowing particular activities.

CURWOOD: So how do you think your research changes what we ought to be doing to protect this iconic species?

AGRAWAL: I think there's maybe two or three recommendations. The first thing I say is for those citizen scientists that are out there that are planting milkweed to improve habitat for the monarch, I would say please continue especially if you're planting native milkweeds. There's been some issues with non-native milkweeds actually causing some trouble, but if you can identify native milkweeds and plant them, not only will there be no harm, there probably could be some benefit of that. 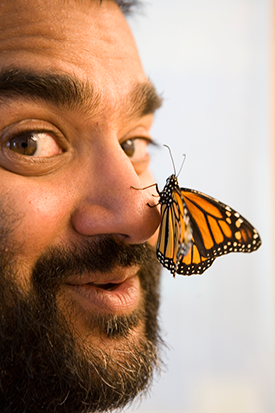 But to really address the problem of the long-term decline, I think we need to zoom out a little bit and ask is this decline specific to the monarch or are we seeing other species that are following a similar pattern and what does that tell us about the health and well-being of our continent. And the unfortunate truth is that many migratory species, and we have migratory birds, for example, that make the same or very similar trek, and many of their numbers are also declining in a similar way. That suggests a larger problem with the way we're managing our landscapes and those could be involving chemicals and pollution or it could be the fragmentation of the landscapes at a larger scale.

The reality for conservation of any species is that it's a very complicated endeavor and for the monarch butterfly we don't have a simple answer. I don't think that planting milkweed is going to solve the problem. Having said that, it raises the issue that it's a complicated problem in that climate, habitat, destruction, pesticides, host plant limitation etcetera all probably play some role. Perhaps one important message here is that there aren't quick fixes or simple fixes. Of course we should do more, we should plant milkweed, reduce the impact of pesticides on the environment etcetera, but it will not be a simple fix.

CURWOOD: Anurag Agrawal is a professor of Ecology and Evolutionary Biology at Cornell University. Thanks so much, Professor.