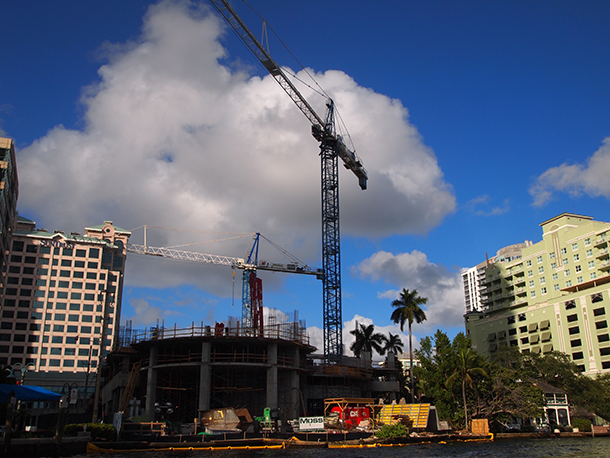 Fort Lauderdale is undergoing a construction boom in anticipation of 50,000 more residents -- about a third of its current population -- in the next fifteen years. (Photo: Katherine Bagley)

CURWOOD: Concerns about fishing and noisy oceans aren’t the only kinds of sea stories we often report on – increasingly there are reasons to worry about the waters rising. This is one of the most obvious and ominous effects of global warming, and that makes living in low-lying coastal areas increasingly risky. Yet some of the very places that will be most affected by rising seas are undergoing real estate booms, such as South Florida. In Fort Lauderdale, “the Venice of America” for example, developers are cashing in on new housing near the sea, though its 165 miles of canals, make it particularly vulnerable to rising seas, as much of the city is close to sea level already. Writer Katherine Bagley reported on Fort Lauderdale’s real estate bonanza and impending sea level rise for InsideClimate News and she joins us now. Kat, welcome to Living on Earth!

BAGLEY: Thanks for having me.

CURWOOD: Talk to me about Fort Lauderdale's growth? How much is Fort Lauderdale projected to grow over these next several decades, at least according to the Chamber of Commerce. 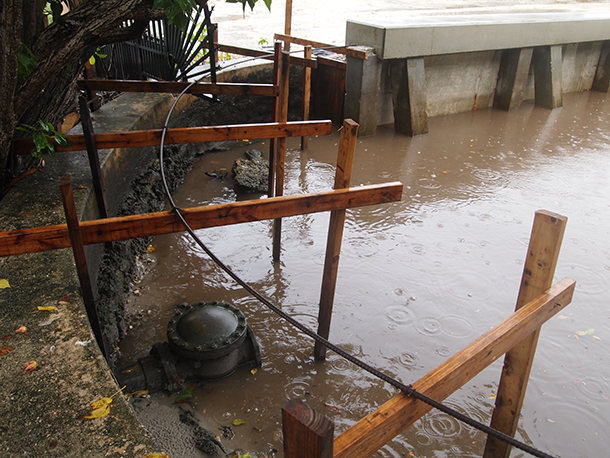 BAGLEY: It's expected to grow by a third. There's about 50,000 people that are expected to move to Fort Lauderdale in the next 15 years and currently the city doesn't have the housing to be able to accommodate those people so there's this massive building boom happening within city limits. There's skyscrapers going up and new condos, new apartment buildings. The city is really transforming itself to accommodate this huge influx of population.

CURWOOD: Now, of course, there are many cities along the coastline. Why is Fort Lauderdale so vulnerable to sea level rise?

BAGLEY: Fort Lauderdale, as you had mentioned, is the Venice of America, so it has 165 miles of canals that wind its way really through the innards of most parts of the city, and like most of South Florida it sits on top of a limestone bedrock which is a very porous bedrock, and it means that when sea levels rise they not only creep over sea walls, they also actually creep through the underlying bedrock of the city and so you'll have water that will creep under homes and into streets. It really affects almost every part of the city. The water is really the heart and soul of Fort Lauderdale and it could be its downfall in the end, unfortunately.

CURWOOD: So to what extent is flooding already happening in Fort Lauderdale? 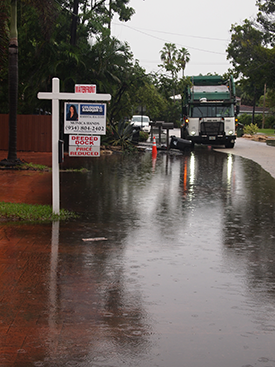 The streets of Fort Lauderdale flood with seawater a couple of times a year, during “king tide” events, when the sun, moon, and the earth align. (Photo: Katherine Bagley)

BAGLEY: Right now the worst flooding that you see is around these king tide events which is when the Earth, the sun, and the moon all align. They happen a few times a year and that's when high tide is 18 inches above normal. Streets flood, yards flood, critical infrastructure is at risk. Because sea level has risen 8 inches in the last 100 years that king tide is 18 inches on top of sea level rise, so it's getting worse and worse and worse every year.

BAGLEY: The real estate market itself, I mean, like I say, it's booming, and as of right now construction codes in the city require that buildings are built one foot above the floodplain but no more than that. I had city officials telling me; “It's true that some of the buildings that are going up now might be dealing with severe flooding in 30 years”, and that's the lifespan of a mortgage.

CURWOOD: What kind of disclosure is there to people who are buying these properties about the flood risk?

BAGLEY: There's not really any disclosure. The real estate community doesn't really want to talk about this and so they're not required to talk about flood risk. When you buy a house and there's lead paint you have to get a disclosure form, there's nothing like that for sea level rise, and climate change and flood risk.

CURWOOD: Now, how do the locals you talk to feel about the fact that sea levels are projected to rise so much and flooding is just going to become more and more common in Fort Lauderdale?

BAGLEY: The last several years those king tides have been a real wake up call and so most people in South Florida know about climate change, they're aware that it's happening, and city officials are racing to take action. Fort Lauderdale officials are putting in a bunch of new flood mitigation measures, things like one-way valves to stop sea levels from creeping onto roads. They are taking steps to reduce their greenhouse gas emissions, but it's a really tough battle. 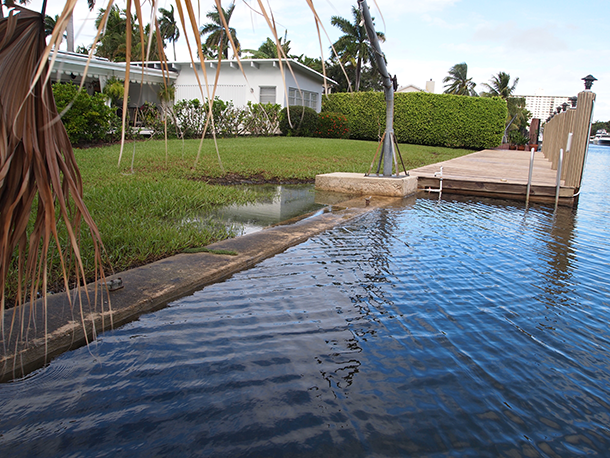 Canal water spilled over a seawall into a Fort Lauderdale backyard during a recent king tide event. (Photo: Katherine Bagley)

CURWOOD: What about the low income and minority communities there. Often around the world, they're on the front lines of climate disruption. What's the situation there in Fort Lauderdale?

BAGLEY: So the low income communities in Fort Lauderdale are actually at the highest point of elevation in the city and so right now they are the safest. The question becomes when the waterfront properties start flooding, the higher income properties, where are those people going to want to move? And they're going want to move into the higher elevation areas. One of the experts that I talk to termed it "climate gentrification" and when you have sea level rise and the oceans rising to the east and you have the Everglades to the west, there's really no place for these people to go.

CURWOOD: So how does the City of Fort Lauderdale's response to this compare to the state’s response on the dangers of climate disruption?

BAGLEY: Fort Lauderdale and South Florida are very much alone in their battle against climate change. Tallahassee, the state capital, Gov. Rick Scott, most of the state legislators are very much against climate action. Gov. Scott has reversed most of the climate programs that previous governors have put in place. They've banned the term “climate change” in government work, and so really communities in Florida that want to deal with this issue either have to band together with their surrounding areas which is what South Florida has done or they really have to fight it alone. They don't have much support from the state. 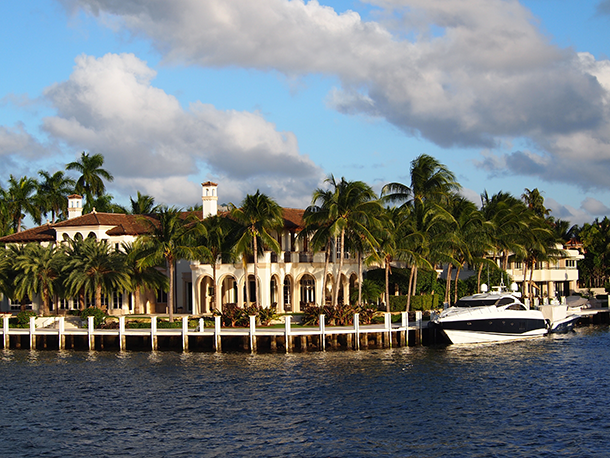 Luxury waterfront properties in Fort Lauderdale tend to be owned by the wealthiest residents of the city; as they relocate due to sea level rise, lower-income populations may be priced out of their homes on higher ground. (Photo: Katherine Bagley)

CURWOOD: So how many individuals who own places there are starting to smell the coffee and quietly putting their places on the market so they can get some money for them now while there still is money to be had?

BAGLEY: I think you're seeing a few people start to do that, but of course you haven't seen this mass exodus, and even if they were, there would be plenty of people willing to come in and buy their property and take their place.

CURWOOD: So, property values are staying flat at least, maybe even rising? 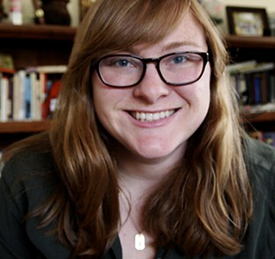 Katherine Bagley reported the story on Fort Lauderdale’s real estate boom for InsideClimate News. She is now an editor with the online magazine Yale Environment 360. (Photo: courtesy of Katherine Bagley)

BAGLEY: They're definitely rising. Prices are really doing well in South Florida especially considering they were just in a recession a couple years ago. They're doing remarkably well, but I think most people would tell homebuyers that it's not a great investment. When you look at what could happen with sea level rise in the next 30 years you know it's kind of daunting to think about buying a house and it's not just the value of the house, it's the flood insurance. At some point our flood insurance premiums are going to increase and some economists have said that the premiums could rise so much that nobody would be willing to buy a house.

CURWOOD: Katherine Bagley reported on Fort Lauderdale for Inside Climate News and is now an editor at the online magazine Yale E360. Thanks so much, Kat.

BAGLEY: Thank you so much for having me, Steve.