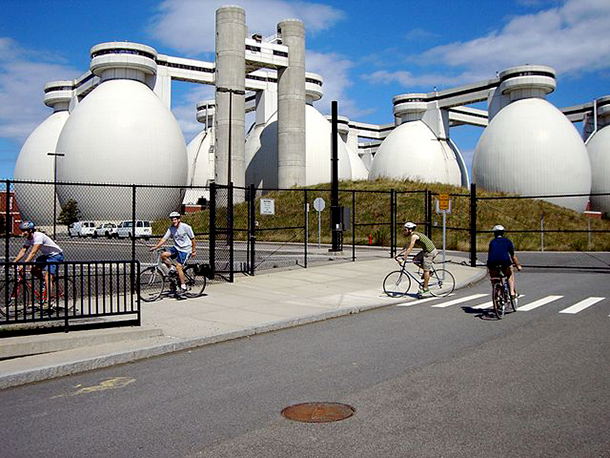 Years of pollution and waste dumping earned Boston the infamous designation as America’s filthiest harbor, but heavy clean-up efforts have turned it into an environmental success story. This is due in part to the Deer Island’s state-of-the-art Treatment Plant, which processes all of the metropolitan area’s wastewater. The plant’s Director, David Duest, gave host Steve Curwood a tour of the plant and explained how the harbor has benefitted from its efforts.

CURWOOD: It's an encore edition of Living on Earth, I'm Steve Curwood.

CURWOOD: Love the place or not – back in the day, the “dirty water” was no exaggeration – sewage went into Boston harbor only partially treated, and the water was truly foul.

DUEST: Boston harbor was one of the dirtiest harbors in the nation, and we were actually rated at “D” or below for water quality. As a matter of fact, you couldn’t fish or swim within Boston harbor for most of the days out of the year.

CURWOOD (with ambi under): That’s Dave Duest, the man in charge of the answer to Boston’s filthy harbor. It was so disgusting that in the early 1980s, a series of lawsuits were filed, requiring proper treatment of Boston’s sewage, though it doesn’t catch the microbeads we know about today. There were numerous delays, and the new infrastructure cost nearly 4 billion dollars. But the result was a state-of-the-art treatment plant on Deer Island.

DUEST: We are actually in the middle of Boston Harbor which is the outermost stretches of the metropolitan Boston area and the Deer Island treatment plant serves 2.3 million people, which is about 34 percent of the total state population for sewage treatment services.

CURWOOD: If you ever come to Boston, you see Deer Island from the aircraft. You have got these iconic big egg-shaped containers, looks like you're trying to hatch something out here. What, in fact, do they do?

DUEST: They're actually a critical part of our wastewater treatment operations. We actually put all of the solid material that is conveyed within the wastewater into those vessels, each one of those being 3 million gallons apiece; we have a dozen of those.

CURWOOD: All that flushing creates a lot of water. What happens to the water?

DUEST: We get up on average 360 million gallons of wastewater a day into this plant with peaks up to 1.3 billion gallons per day, all of that material gets pumped to Deer Island and then lifted up into the treatment process. After we clean it up we remove 94 percent of the total solids out of that wastewater and the remaining clean water then gets disinfected, dechlorinated and then sent out into Massachusetts Bay for final disposal.

CURWOOD: And where does that water end up?

DUEST: Eventually all the treated effluent is disposed of in Deer Island's outfall, it goes into a deep broad tunnel that's 450 feet below the surface, travels nine-and-at-half miles eastward out into Massachusetts Bay and that gets distributed over that last mile and a quarter through 53 risers that are just like sprinkler heads on the bottom of the ocean floor, and that actually disburses over a wide area so you don't get that single one open end of a pipe that's going to impact that one area.

CURWOOD: And so, now, today, in Boston Harbor, what's different about the ecology here?

DUEST: The ecology is actually greatly improved. We've gone to the full secondary level of treatment so the quality of the effluent that leaves the facility is much, much cleaner than it was ever in the past. We haven't had any permit violations for over eight years now and we're actually seeing a recovery of the harbor so that things like Eel grass are actually naturally reestablishing themselves back into Boston Harbor. Eel grass is a very sensitive natural species of sea grass that only grows when the water is very, very clean. 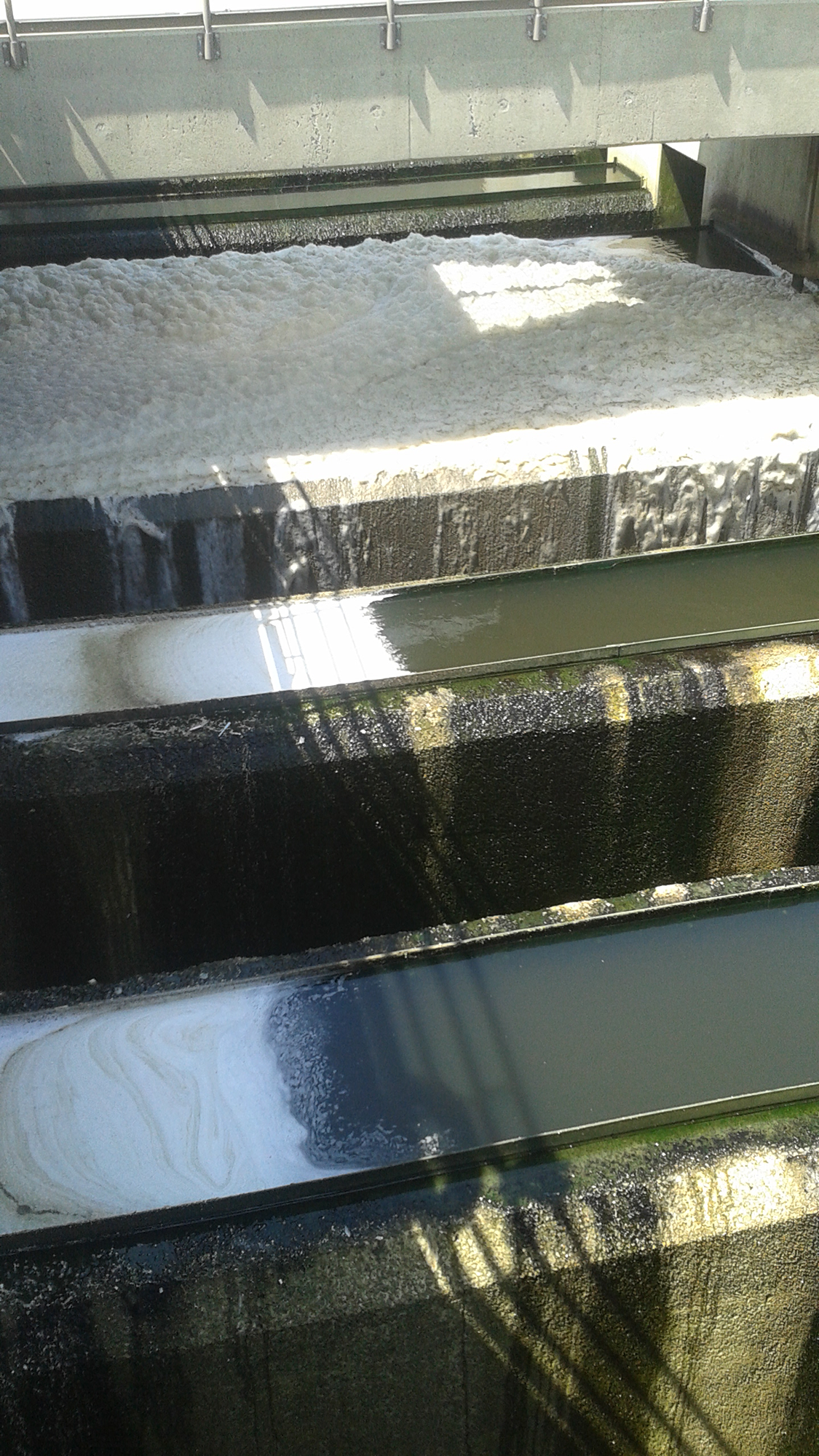 Foam floating on the treated water is the result of chlorine that’s added to kill bacteria. The foam is skimmed off before the water travels down a 10-mile-long outfall pipe to the outer reaches of the harbor. (Photo: Helen Palmer)

CURWOOD: Well, I'd really like to take a look at this outfall. I'm not sure I want to go all the way down the tunnel, and I guess it's full, so I can't right?

DUEST: You cannot. If you go in there it's the point of no return. You'll come out nine-and-a-half miles later about 12 hours later actually.

CURWOOD: But I really want to take a look at where this is, so let's head over there.

DUEST: Alright. We are now at the end of the disinfection basin just prior to the start of the outfall tunnel.

CURWOOD: It looks like sort of a ladder of a bunch of waterfalls with, well, a fair amount of detergent. Don't tell me that some somebody's washing machine.

DUEST: What you're actually seeing there is a little residual chlorine that's actually causing a little bit of foaming. All of that foam however is collected in our systems and never actually makes it out into Massachusetts Bay, but really what you're seeing is the water spilling over and dropping about 10 feet over the edge and then filling up to a certain level providing the head that it needs to send it to the outfall.

CURWOOD: Now I'm looking over the side here, and I'm seeing oh, there's a really deep long channel that goes way down. What am I looking at here? 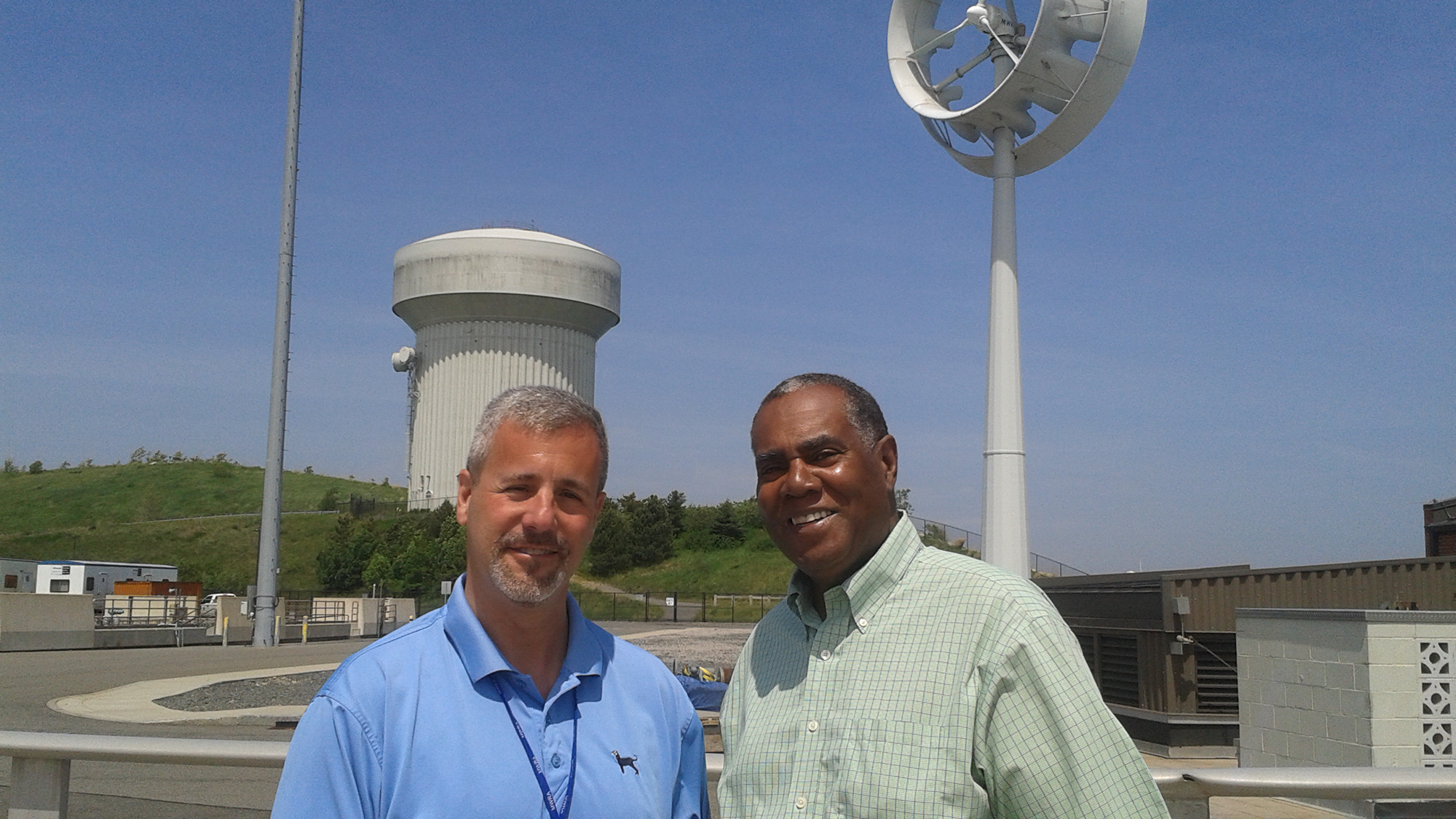 DUEST: There's a bypass channel that you're seeing down below which is actually one of the recycle streams. We use treating effluent as cooling water for some of our facilities.

CURWOOD: So how do you guys feel about this operation? How good is it?

DUEST: Deer Island's actually been in operation for 20 years and it's doing very, very well. We're seeing the recovery of Boston Harbor, we're seeing no impacts to Massachusetts Bay, so I’d say that the Deer Island treatment plant is meeting its objectives.

CURWOOD: Dave Duest is Director of the Deer Island treatment here in Boston Harbor. Dave, thanks for taking the time to walk us around your plant.

About the Boston Harbor cleanup

“Boston Harbor: The Anatomy of a Court-Run Cleanup” (Academic paper)

Video: “How We Cleaned Up the ‘Dirtiest Harbor in America’ – Travel Channel’s Off Limits