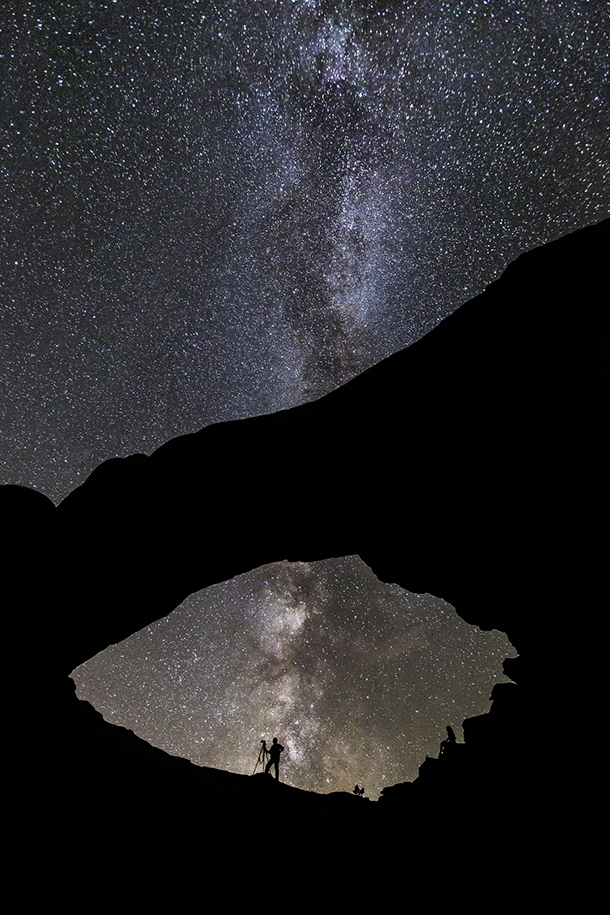 The view of the cosmos through the South Window at Arches National Park (Photo: Jacob W Frank)

The National Park Service protects the land, water, and wildlife in some of the most beautiful places in the United States. But Nate Ament, a park ranger based in Moab, Utah is working to protect another resource—darkness. In a world increasingly flooded with artificial night, a clear view of the night sky has become more and more rare. Reporter Emmett Fitzgerald takes a night walk to see the stars with Nate through Arches National Park.

FITZGERALD: Tonight isn’t really the best night to see the stars. The moon is two thirds full above Arches National Park in Eastern Utah. But that hasn’t deterred my guide.

AMENT: My name is Nate Ament. I'm the Colorado Plateau Dark Skies Coordinator with the National Park Service. We’re headed towards the North Window, we’re going to do some stargazing and look at the landscape under the moonlight here.

FITZGERALD: This park is named after its signature red rock arches, or windows, so massive you could drive a fire truck under them. Nate’s been out here countless nights, but he says it still feels like the surface of Mars.

AMENT: I came out here for the first time when I was a kid, and this was just magic land for me. I mean it still is, but I just didn’t even know that landforms like this existed. It just boggled my mind. It’s totally otherworldly. 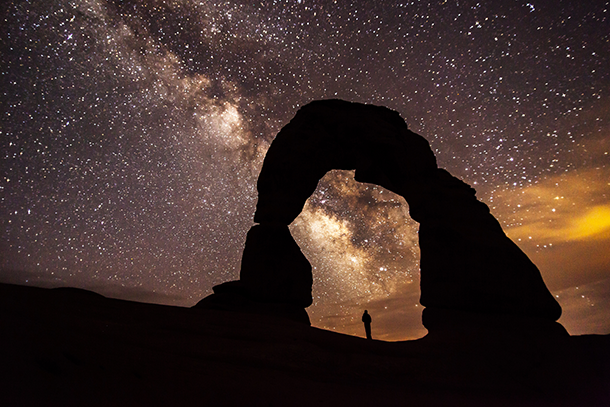 FITZGERALD: Nate points out the spot where the writer Edward Abbey parked his trailer when he worked for the National Park Service here in 1956 and ’57. Abbey’s field notes from that stint formed the basis his iconic book Desert Solitaire. Abbey wrote of his dark nights in Arches:

Leaving the flashlight in my pocket where it belongs, I remain a part of the environment I walk through and my vision, though limited, has no sharp or definite boundary. The night flows back, the mighty stillness embraces and includes me; I can see the stars again and the world of starlight.

We pass the North Window, a giant eye-shaped hole in the rock wall and head south. Nate’s wearing a headlamp tonight, and unlike Abbey’s flashlight, it’s red.

People aren’t used to it. It’s interesting when you get them out in a really dark place and let them dark adapt you get these people saying, “WOW I’ve never seen the stars like this before!” And I’ve never seen these kind of colors in the night sky, because they took the time to let their eyes adapt.

FITZGERALD: We arrive at the South Window, and Nate turns off the headlamp. The moon is bright, casting a silver glow across the sky, but there’s still plenty to see.

AMENT: So if you look straight above us here that’s is three stars right there, Altair, Deneb, and Vega, and those three make up the summer triangle. Cassiopeia is actually just behind the South Window here, we’re looking through the South Window into the cosmos beyond and we can see the constellation Cassiopeia. If it was just a little bit lower we’d be able to look just to the right of Cassiopeia and see just this faint little wisp of light and that’s actually the Andromeda galaxy, which is our closest neighbor. A little bit lower on the horizon we’d be able to see Sagittarius, which is if you will it's like the teapot, and the steam coming out of the teapot that’s the core of the Milky Way, it’s the center of our galaxy. And if the moon wasn’t out and the rock wasn’t in the way we could see that right now. 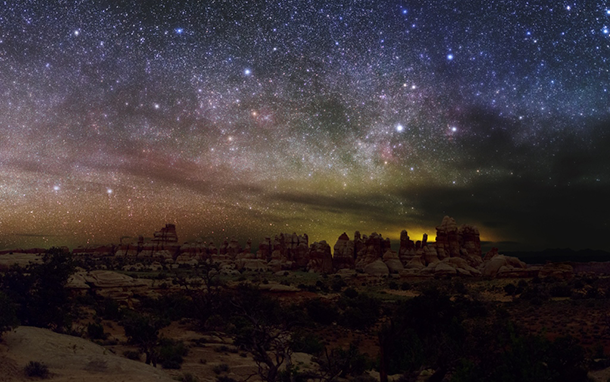 A composite image of the sky above Canyonlands National Park (Photo: Dan Duriscoe, used with permission)

FITZGERALD: It’s hard to complain about this rock though. [LAIGHS]

AMENT: [LAUGHS] Yeah I mean that’s the perfect picture frame for the cosmos. You can’t really complain about that.

FITZGERALD: And so the Natural Skies and Night Sounds division of the National Park Service was born.

AMENT: And they measure how dark the skies are in parks. I think they’ve taken measurements in over 400 locations. So we have this really rich dataset of darkness all over the entire country.

FITZGERALD: One metric for darkness is called the Bortle Scale, and it rates the sky from 1 to 9.

AMENT: Where we are right now because of the light pollution from Grand Junction and Moab would be like a Bortle Class 3. Whereas if you went into the middle of New York City it’s a Bortle Class 9, which is the other end of the spectrum, the brightest of the bright, you can’t really see any stars.

FITZGERALD: Humans have lit up so much of the world that it’s almost impossible to find a Bortle Class 1 any more. But some of the darkest skies in the country are right here at the Four Corners where Utah, Colorado, Arizona and New Mexico meet on the high desert of the Colorado plateau. Canyonlands National Park, just down the road from Arches has been measured at a Bortle class 2, and was recently named an International Dark Skies Park. It’s the seventh on the Colorado Plateau to get that honor.

AMENT: And that’s by far the highest concentration of these parks in the entire world. There’s only 28 worldwide so we have 7 of them right here on the Colorado plateau.

FITZGERALD: With so much federally protected land on the plateau, Nate says there’s a chance to preserve a really large swath of darkness right in the heart of the West. He works with towns like Moab to cut unnecessary lighting and introduce technologies like light shields that reduce sky glow. Smart lighting isn’t really a hard sell when you explain how much money it can save. One town that’s been particularly forward thinking about its lights is Flagstaff, Arizona.

AMENT: There’s one study that estimates if the entire state of Arizona were to take up Flagstaff’s lighting practices it could save the state $30 million per year. So that gets people attention. 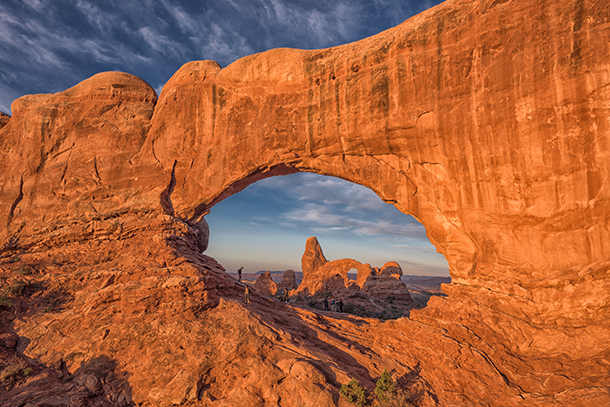 FITZGERALD: Nate says reducing light pollution isn’t just about aesthetics. There’s a growing medical consensus that overexposure to artificial light can disrupt human circadian rhythms, and may even contribute to health problems like diabetes and certain cancers. And the excess light impacts wildlife as well.

FITZGERALD: But more than anything else, Nate just wants to give the many people who live in over-lit cities a shot at seeing the night sky as Edward Abbey would have seen it.

AMENT: Two-thirds of the people in the world can’t see the Milky Way from where they live. And so you get an idea of how rare it is to come out and see these dark skies in places like Arches and Canyonlands, and you can see why people come from all over the world to see them. And a lot of visitors will say it’s by far the most exciting and memorable part of their trip when they go around the camp and ask, “What was your favorite experience, what will you remember most?” people say, “Seeing the Milky Way overhead overnight when I slept out, or seeing the stars in the dark sky that I’d never seen before.”

FITZGERALD: As we head back, we come across two men with binoculars looking up at the sky. Ken and Robert are east coast friends on a road trip through the west.

ROBERT: Well we came out because we’re looking for pitch dark. The moon is kind of spoiling it a little bit although it’s beautiful too, but we wanted to see as many stars as we could. Clear, no moisture, it’s beautiful. We weren’t going to leave here without coming out here at night.

FITZGERALD: Ken and Robert aren´t the only ones out here at night. Flashlights held by stargazers flicker on and off throughout the park. Robert says he really appreciates that Arches keeps the gates open after hours. This view is part of why he made this trip in the first place. 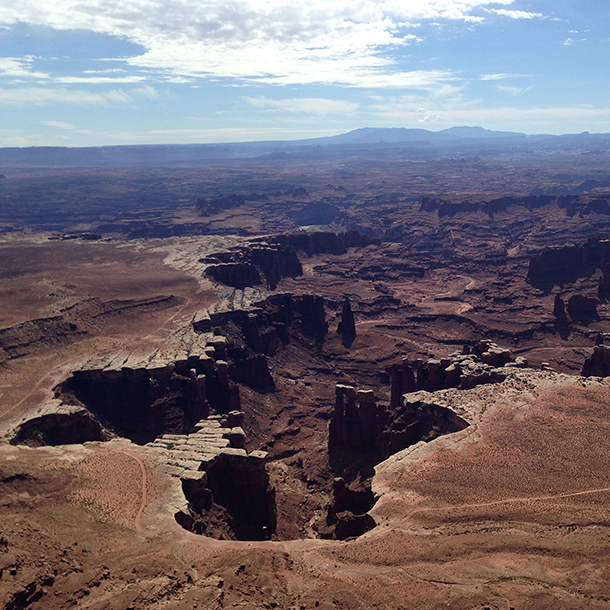 Author Edward Abbey described the Canyonlands as "the most weird, wonderful, magical place on earth—there is nothing else like it anywhere.” (Photo: Emmett FitzGerald)

ROBERT: It’s just cool. When it gets so dark that you can see the Milky Way clear, look at how far away you’re looking. You think about little things like how long it took that light to get here. Stuff like that.

FITZGERALD: As we walk back to the car Nate’s smiling.

AMENT: Yeah it’s super gratifying to see somebody and just talk to them and they’re from out of town and “what brings you here?” “Well I came out here for the dark skies and the stars” and it’s like, "Yes! I’m doing my job! Alright."

FITZGERALD: In the 20th century, conservationists like Ed Abbey worked tirelessly to protect the air and water and wildlife in parks like this one. And now Nate Ament is adding a resource for the 21st century to that list, a clear night sky like this one, spread out from horizon to horizon.

For Living on Earth this is Emmett FitzGerald in Arches National Park.