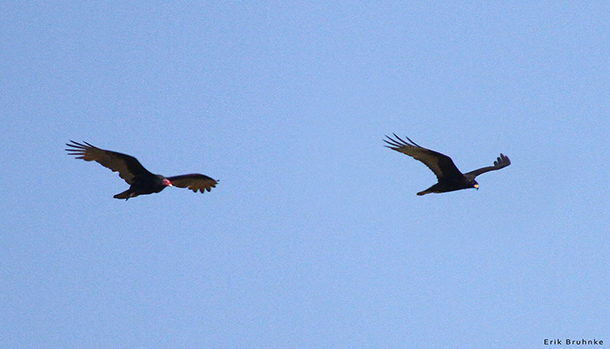 Turkey vultures soar over the landscape, searching for dead animals. But the Zone-Tailed Hawk, an American raptor that’s a vulture look-alike, soars with them, its sharp eyes searching for mice and birds that ignore the carrion-seeking birds. Michael Stein has today’s BirdNote.

CURWOOD: Vultures may not be everybody's favorite birds, as they are seen picking at dead things. But as Michael Stein explains in today's BirdNote®, for one American hawk, vultures can provide useful cover.

STEIN: The Zone-tailed Hawk of the American Southwest looks a lot like a Turkey Vulture. It’s dark all over, has a long tail, and soars on long, upward angled wings while tilting from side to side. And – this is where it gets intriguing – Zone-tailed Hawks often soar among groups of Turkey Vultures.
But there’s a crucial distinction between the two, especially if you happen to be a dove or lizard exposed on the terrain below. While the vultures are searching for carrion, the Zone-tailed Hawk in their midst is hunting live prey. 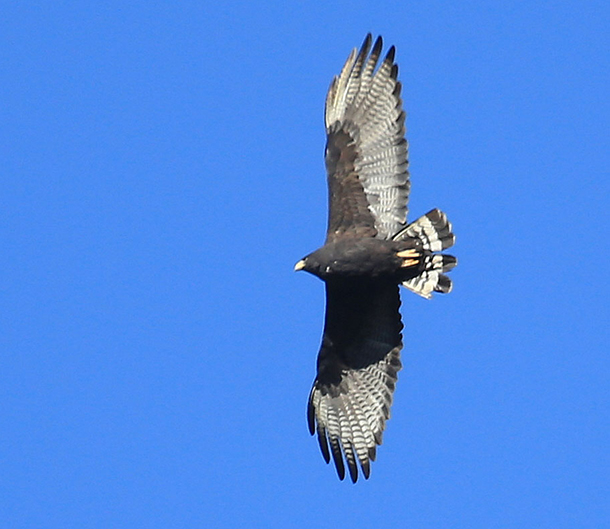 Just how Zone-tailed Hawks developed this relationship with Turkey Vultures isn’t clear. But we do know that Zone-tails occur only within the geographic range of vultures. And they don’t just soar with them – they also nest and roost near their scavenging accomplices.


Listen to the original story on the BirdNote® website

More on Zone-tailed Hawks from the Cornell Lab of Ornithology