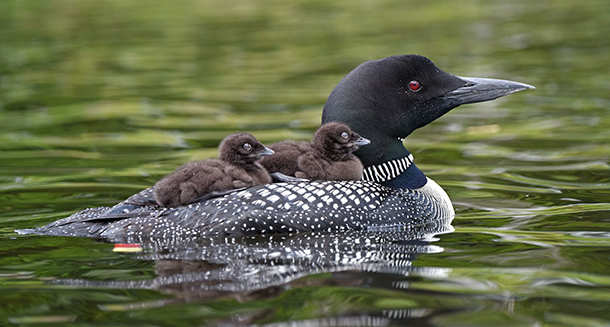 The oldest known loon in the Northeastern U.S. is referred to as the Sweat’s Meadow 1993 female, for the year she was banded. She’s probably about 30 years old and has hatched 20 chicks and fledged 11. (Photo: Derrick Jackson)

CURWOOD: With global warming, mosquitoes and other insects and pests that can carry diseases are making their way into places that used to be too cold for them. And while we think of mosquitoes carrying human diseases including Zika, West Nile and Dengue Fever further North, as commentator Derrick Jackson notes, birds are also at risk.

JACKSON: Combine the most iconic bird of the North Woods with one of the oldest tropical diseases and what do you have? A New Hampshire common loon, dead from avian malaria.

It was the first such loon death in the world, confirmed by wildlife biologists at several institutions. Here’s how it happened. Campers on a remote site in the Umbagog National Wildlife Refuge, thirty miles from the Canadian border, spotted a floating loon carcass and waved down a patrol boat. A refuge biologist and intern collected the carcass, chilled it and drove it to the Loon Preservation Committee, which then took it to the University of New Hampshire for analysis -- all by the next day.

Malaria is difficult to confirm as a cause of death in a decomposed bird. But this carcass was fresh and the researchers found the disease in its brain, liver, heart and lungs. Malaria kills birds with no evolved resistance quickly, so the researchers were sure the loon was infected by a carrier mosquito at Umbagog. There’s other evidence that avian malaria is flying northward with global warming. It has been confirmed among Arctic birds by researchers at San Francisco State University.

Loons are among the world’s most ancient birds, pictured on Canadian coins, and they’ve rebounded with conservation efforts, though they remain far below historic levels in New England. They’ve weathered many human assaults, from mercury in acid rain to lead fishermen’s sinkers. This very same Umbagog is home to the Northeast’s oldest-known loon, called Sweat Meadows 1993, for the year and place she was banded. Over the years, she has hatched at least 20 chicks, with 11 surviving predation by eagles, gulls and snapping turtles. Her current mate is 22 years old. 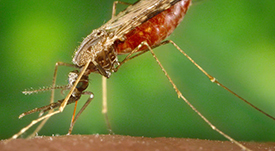 Both avian malaria and the type of malaria that affects humans are mosquito-borne, but are carried by different mosquito species. (Photo: CDC Global, Flickr CC BY 2.0)

These old birds represent a triumph of environmental recovery, yet the loon dead from malaria is as haunting as its eerie wails in the middle of the night. It might just have been an unlucky, solitary bird. But it also may be a sentinel warning us that climate change is eroding the distinction between tropical jungle and boreal forest.

About the Common Loon, from Umbagog National Wildlife Refuge