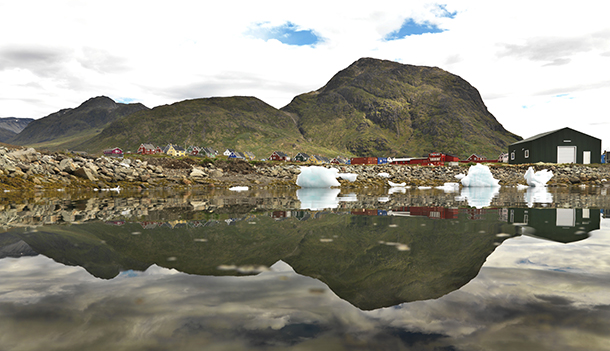 The view of the Greenlandic village of Narsaq from a boat. (Photo: Greenland Travel, Flickr CC BY 2.0)

This week, Peter Dykstra and Living on Earth Host Steve Curwood talk about the costs and benefits of a proposed Uranium mine to a small fishing community in Greenland, discuss environmental justice and the pig industry in North Carolina, and reflect on a famed Swedish chemist who was one of the first to calculate the global warming potential of CO2.

CURWOOD: From Lexington Kentucky to Conyers Georgia, to meet up with Peter Dykstra now, and dive beyond the headlines. Peter’s with Environmental Health News, that’s ehn dot org, and DailyClimate dot org -- hi there Peter!

DYKSTRA: Hi Steve. When we think about Greenland, we think about Vikings and a vast, ice-covered expanse where rising temperatures may be in the process of unleashing enough melting ice to wreak havoc with ocean levels worldwide.

CURWOOD: Yeah, well that would be the downside to making Greenland green again.

DYKSTRA: But there’s something else at play in Greenland. Huge, cold, barren, and beautiful, Greenland’s looking to modernize while addressing the unique social challenges of the Arctic, where alcoholism, depression, and suicide are widespread. And in the southern village of Narsaq, a fading fishing industry has locals tempted to welcome the foreign investors in one of the largest open-pit mines in the world for uranium and other rare metals prized in the electronics industry.

CURWOOD: Hmmmm, a struggling town pondering the lure of jobs from a huge mine. Kind of sounds familiar.

DYKSTRA: And this small town of sheepherders, native sealers, and a recently-closed seafood plant are tempted indeed. The mine complex would cover five square miles, much of it disposal areas for mining waste. Narsaq could be a boomtown for as much as forty years until the mine plays out, but its pristine setting and traditional ways could be sacrificed.

CURWOOD: Well, money can make people do all sorts of things. What else do you have for us today?

DYKSTRA: We’ve talked a lot about environmental justice, how poor and minority communities take a major hit from pollution, often with very little recourse. North Carolina’s sprawling hog farms are a prime example. And it’s no secret that Big Pig holds a lot of sway on the state’s government. Last month the federal EPA’s Civil Rights Office put the state on notice that it’s concerned about official discrimination against African Americans, Latinos, and Native Americans who live near industrial hog waste facilities. 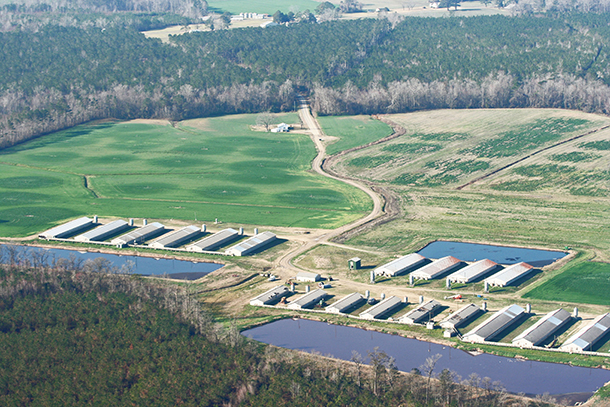 CURWOOD: And, to be clear, you’re talking about the same Federal EPA that’s clearly in the middle of a retreat from enforcing environmental laws?

DYKSTRA: And there are allegations that state regulators may have directly violated the law by tipping the hog industry off to what were supposed to be secret negotiations with the Feds, and by allowing folks who complained about odor and pollution from hog operations to be harassed. There’s further complication. While the 2016 election may have swung the Feds away from protecting the environment, a very close governor’s race in North Carolina, that a Democrat won, may push state regulators to take a harder line with hog waste and environmental justice. So like the situation in Greenland, it’s wait-and-see.

CURWOOD: Well I think in Carolina may be more like “wait-and-smell.” Let’s move on to the annals of environmental history now. What do you have for us?

DYKSTRA: February 19, 1859: Svante Arrhenius is born in Sweden. He came from a farming family and developed an affinity for botany and other ag sciences. His passion for science stretched to a whole range of studies in physics, chemistry and biology, as well as the links between the three fields, and in 1903 Aarhenius received the Nobel Prize in Chemistry for his work on conductivity and electrolytes.

CURWOOD: But we’re not remembering him today because of Gatorade, right?

DYKSTRA: No sir, we’re not. In 1896, Arrhenius published one of the first important works on what we now call “the greenhouse effect”. He studied the consequences of coal burning and the potential impact on temperatures in Europe and estimated that a doubling in atmospheric CO2 could raise temperatures by nearly ten degrees Fahrenheit. Current science confirms the rise but probably not by quite as much as that. 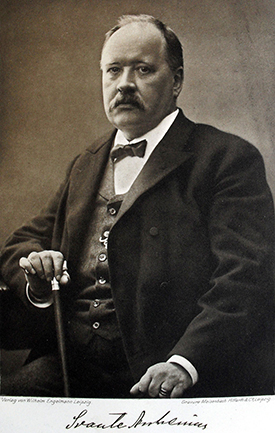 CURWOOD: Yeah, but he wasn’t that far off either, and a hundred twenty one years-worth of evidence later, some people still want to argue about it.

DYKSTRA: That’s true. And finally, Steve, let’s clean up a little mess I made a couple of weeks ago. I mentioned what I called a “new” study describing lower-than-expected levels of tension between industry and state environmental regulators. Well, that study was actually based on a survey done in 2013, so it’s not exactly new. Thanks to one of our alert listeners for straightening me out.

DYKSTRA: All right, Steve, thanks. Talk to you soon.

Arrhenius and his greenhouse study