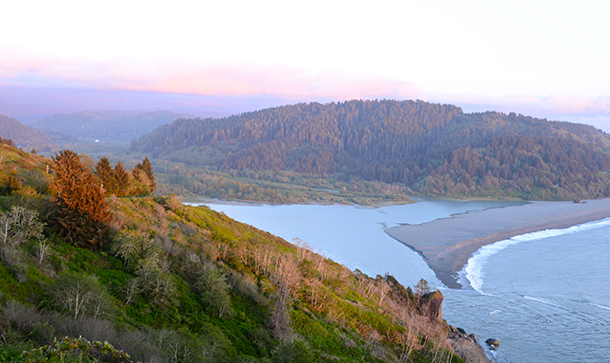 The mouth of the Klamath River is a busy hub for salmon on their way to spawn further inland. Yurok tribal lands encompass a 44-mile stretch of the river beginning here at the Pacific Ocean. (Photo: Linda Tanner, Flickr CC BY 2.0)

The Yurok Tribe has lived along the Klamath River in Northern California for thousands of years, relying on the annual salmon run for food and revenue. But dams on the Klamath have created conditions for a deadly aquatic parasite that threatens to wipe out the vital Chinook run. Yurok Tribal Chairman Thomas O’Rourke shares what might save the salmon and fishing communities of the Klamath.

CURWOOD: When the ice sheets retreated in North America about ten thousand years ago, indigenous peoples in the temperate rainforest that sprung up on the west coast from northern California to Alaska built societies dependent on salmon along the great rivers. Today most of the great trees of that rainforest in northern California are gone, as are most of the fish, pushed even faster toward extinction by the construction of dams. And now the Yoruk Tribe, that lives near the Oregon border, itself is losing its way of life, as the annual run of Chinook salmon from the Pacific into the Klamath River is on the verge of collapse.

O'ROURKE: The Klamath River is our lifeline. We have depended on this river since time immemorial. Our stories go back to the time of darkness, our creation stories as Yoruk people. I growed up, born and raised here on the Klamath River, and as a child there was a lot of salmon. We had runs when I was a child that don't exist here anymore. I learned to the fish at a very young age, at probably about seven or eight years old. When I was a child, we didn't have much money, and the land provided about 90 percent of our food. Our roads are terrible here, and our roads would go out and sometimes we couldn't get out of here for weeks at a time, and if we didn't have food in jars, we did not eat. We relied on the game animals, the deer and the elk, the salmon which come from the river, the eels, the steelhead, the sturgeon, these are what I growed up to know how to eat and what kept us alive, what sustained us. 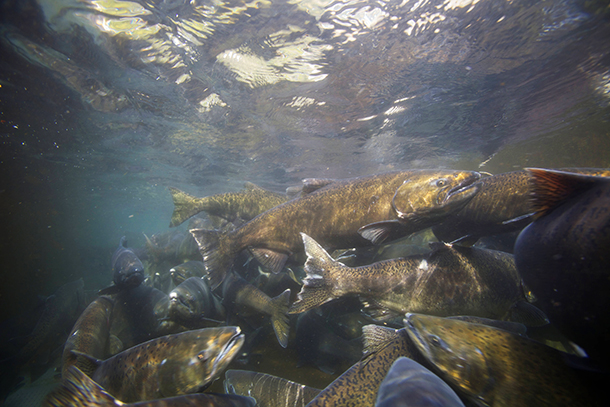 CURWOOD: In a good year, what would the salmon count look like on the Klamath?

O'ROURKE: In 2000 or so, we had over 100,000 fish allocation, which allowed us to both catch fish for subsistence as well as to have a commercial season, which our people very much depend on, you know, because of the lack of job opportunities that are here.

CURWOOD: And what does the salmon look like today?

O'ROURKE: You know, when they told us our numbers, last year was bad. I mean, bad. We had trouble swallowing our numbers last year. We got 6,000 fish which isn't even enough for one salmon a person, for a tribal member. This year, we have a tenth of that. So, we have a little over 600 fish allocations for harvest, and our tribe is the largest tribe in the state of California with right around 6,200 tribal members, and we have 650 fish to sustain ourselves.

It's hard to understand my emotions, you know, of how I feel and our tribal members emotions, how they feel. You know, all of sudden we're told we're not going to be able to fish, you know, when we've fished all of our lives. The fish had always been there, you know, at least some kind of numbers. Well, this year is probably the lowest that I've ever knowed it to be.

CURWOOD: I understand that the Yoruk tribe conducted studies investigating the presence of an aquatic parasite on local fish population. How prevalent is this parasite and what has its effect been on the river's fish?

O'ROURKE: C Shasta is, it’s a parasite. They multiply inside the polychaete worm, and then it spreads across the floor of the Klamath River, and that's the one that’s been really infecting our salmon when they are juveniles. And it's due straight up to poor water quality, management, flows, dams.

We have four dams that we're working on to remove. And that what they do is that they incubate for this parasite. You know, it likes the warm water. It likes everything that them dams have in it, so the fertilizer, the byproducts. And so, it is infested badly. The disease rate has gone sky high, and now we're starting to see the impacts of this disease that is caused pretty much by man. 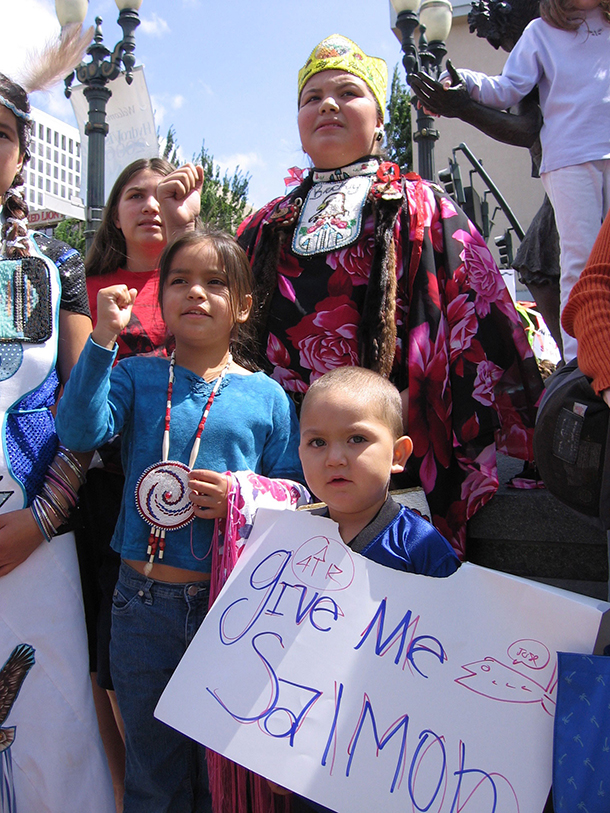 Advocates have been fighting for river dam removal for years. In 2006, Klamath Basin Tribe members and allies staged a rally at the bi-annual meeting of the International Hydropower Industry -- Hydrovision -- calling for the removal of PacifiCorp’s four Klamath River dams. (Photo: Patrick McCully, Flickr CC BY 2.0)

CURWOOD: How much would it help if the dams were removed?

O'ROURKE: Well, we'll get our natural flows. Right now we get warm water off of the top of the dams. You know, the cold water doesn't come down which the fish very much need. It's hot here. It gets hot. It gets up near 110 degrees. It also stops the fines from coming down. You know that in the past all the spawning material, the gravel, the fines, you know, have been washed out, and the dams are stopping new fines from coming in, new gravel so the fish can spawn. So, it's imperative to get these dams out. There's four major dams that are causing most of the problems upstream.

We have been working since right around 2000 working towards dam removal. In the year 2010, Pacific Corps made its final decision to remove the dams. And that's big news for us because, once the dams are removed, then we can begin the real healing process for the river, and we will have a much better quality of water.

Quality of water means everything. You take a couple of fish and you throw them in a fishbowl, goldfish. You put them in a little bowl, and they'll do fine, and the water can be pretty warm. But if you throw a few more in there, you know, they're going to start to die. If you take and you put an oxygen hose in there, you know, they'll do fine, and you can throw some more fish in there. Then, they'll still do fine. But if you take a couple of ice cubes and put some ice cubes in that little fishbowl along with the oxygen, then, you know, you can fill that bowl up with fish, and they'll do fine.

CURWOOD: What are the plans for removing the dams? How soon are they coming down?

O'ROURKE: In the year 2020, the dams are scheduled to come out. Many stakeholders pulled together to make this happen. It's something that people said was impossible 20 years ago, 15 years ago, 10 years ago. People say it's pretty much impossible, but I see them coming down.

CURWOOD: Aside from undamming the river, what else could help restore the fish?

O'ROURKE: We were put here in the beginning as gardeners, the caretakers. So you can look at the river as a garden, and it's not just the water and the salmon directly, you know. It's the forest, it's everything in the ecosystem that ties together to make the river healthy. So, you can't just fix one component. Many components need to be fixed, erosion control because of the poor logging practices. 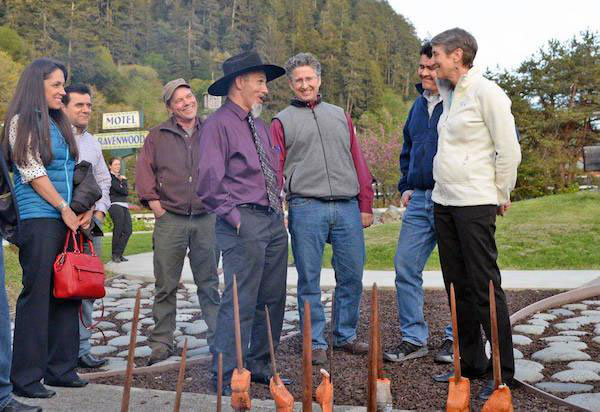 We have to address it across the board. When the forest is restored, then our spring waters will be restored, our ground waters will be restored. It all works together. It's a complex big picture. If the river dies, we die as a people, our way of live dies, our society it becomes extinct. And so, we will restore and revive our fisheries and our river.

CURWOOD: Thomas O'Rourke is the Chairman of the Yoruk Tribal Council in northern California. Thanks so much for taking the time Mr. Chairman.

O'ROURKE: Thank you very much and have a good day.