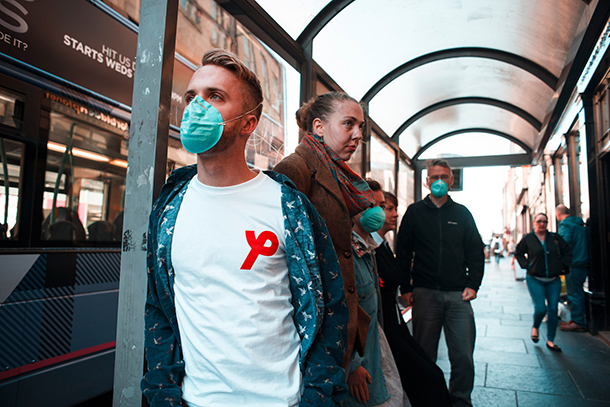 Exposure to the air pollutant nitrogen dioxide at levels commonly seen in the U.K. may impact life satisfaction as much as being widowed. (Photo: Friends of the Earth Scotland/Maverick Photo Agency, Flickr CC BY 2.0)

Nitrogen dioxide is known to harm health, especially lungs and heart, and now a new study finds that it can take a heavy toll on life satisfaction, too. Even if NO2 pollution is below the EU legal limit, sharp increases may lower life satisfaction as much as the death of a spouse. UK’s York University researcher Sarah Knight tells host Steve Curwood that parts of the UK far exceed the EU legal pollution limit, and what city-dwellers can do to protect themselves from this danger.

CURWOOD: From PRI, and the Jennifer and Ted Stanley Studios at the University of Massachusetts Boston, this is Living on Earth. I’m Steve Curwood. Bad air is not only bad for your physical health. It’s also bad for your mental health and sense of well-being. That according to Researchers at York University in the UK, who recently reported that as nitrogen dioxide pollution increases, satisfaction and happiness decline. Their findings add to a body of literature that shows air pollution promotes health problems, including cardiovascular and respiratory diseases. Nitrogen dioxide is a byproduct of burning gasoline, diesel, and other fossil fuels and gets into the air through smokestacks and tailpipes. The lead author of the study is PhD candidate Sarah Knight, and she joins me now from York.

Welcome to Living on Earth.

KNIGHT: Hi there. Thanks for having me.

CURWOOD: So, your research looked at whether or not there is a link between nitrogen dioxide and life satisfaction. What did you find?

KNIGHT: Yeah, so we took a big dataset of over 50,000 adults in England, and this dataset is really nice because it tracks the same people through time and space. So, it's the same people being asked the same questions every year. So, we're able to bring that together with how air pollution changes through time and space as well and look at whether there were changes in life satisfaction and subjective well-being, and what proportion of that change is down to the changes in nitrogen dioxide. 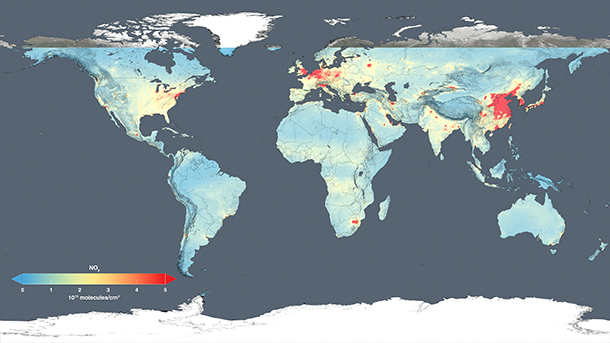 2014 NASA map of atmospheric nitrogen dioxide concentrations around the world. Note that the map shows concentrations from 0 to 5 quadrillion molecules -- that's an upper limit of 5 with 15 zeros after it! -- per centimeters squared. (Photo: NASA)

CURWOOD: OK, I can't wait to find out. What did you find in terms of a connection here?

KNIGHT: [LAUGHS] I'm glad you're so excited. The main results were an increase in 10 micrograms per meters cubed of nitrogen dioxide reduces your life satisfaction on a scale of one to seven by 0.03. [LAUGHS] So I don't know if any those numbers mean anything when you say it like that so we try to find other ways to communicate how meaningful that is for people. 0.03 on a scale of one to seven sounds quite small I guess. So, we wanted to compare it to the things that we know that reduce your happiness and well-being, things like your employment status and your relationship status. We found that if people are raised to a pollution level of the legal limit of 40 micrograms per meters cubed, the loss in life satisfaction is comparable to about 83% of marital separation, over 100% of widowhood and just over 50% of unemployment. So, kind of three big things that really do affect your life satisfaction, your happiness. Much more substantive than we were expecting. 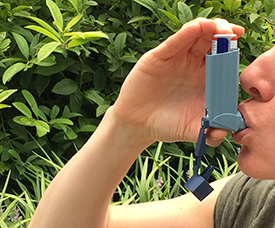 Air pollution takes a toll on happiness, Sarah Knight conjectures, partly because of the stress of its physical effects. Nitrogen dioxide pollution irritates the lungs and is especially dangerous for people who have asthma or heart disease. (Photo: NIAID, Flickr CC BY 2.0)

CURWOOD: Now, there are a lot of other factors that can make people dissatisfied, of course. What other explanations did you consider?

KNIGHT: Absolutely. Yeah, so we try and account for as many of these kinds of things as we can. So we brought in all kinds of data into this. We brought in things around income. There's lots and lots of explanation about how income is related to our well-being. We also brought in other geographical factors as well, so other things about the neighborhood that you live in as well. So, things like population density, crime, education, income deprivation, isolation as well - so how close you are to services and your GP and health services and things like that. We also looked to account for other environmental factors as well, like green space and blue space. So, we tried to hold all those things constant and then tried and isolate that effect that pollution will have on your life satisfaction.

CURWOOD: So, what are the pollution levels of nitrogen dioxide there in the UK? 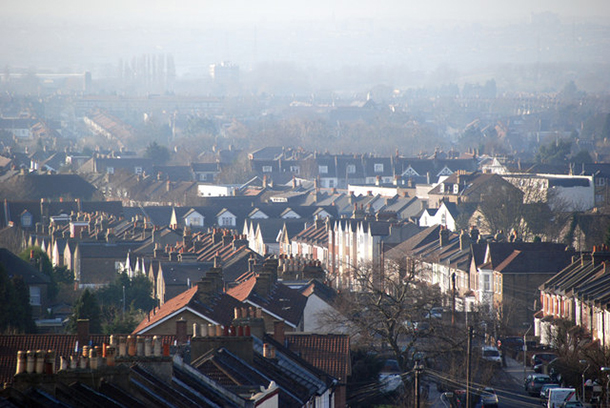 London, shown above on a smoggy day, regularly exceeds its annual nitrogen dioxide limit in the first week of the year. This year, it breached the legal limit in just five days. (Photo: Chris LL, Wikimedia Commons CC BY-SA 2.0)

KNIGHT: So, air pollution is in the news a lot at the moment, definitely here in the UK, and nitrogen dioxide specifically. We looked at where the highest and lowest values were within England and we saw that the average value somewhere down in Cornwall and Devon was something like three micrograms per meters cubed, and in London the average was something like 58, 60. So, you get this huge geographic difference in average values. So, 10 micrograms per meters cubed is quite a big jump. The legal limit set by the EU based on World Health Organization guidelines is 40 micrograms per meters cubed. So, that gives you some kind of measure of what's high and what's low. Actually, although most parts of the UK are below that, but there are kind of hotspots where you get this fluctuation above that point. So, there’s two limits. There's the annual exceedance limit, and there's also these daily limits as well that are set, and within London it was exceeded within the first five days of the year this year. It's pretty much the same every year. It's exceeded within the first week for nitrogen dioxide within London, and the UK government has been taken to court over it.

CURWOOD: Now, what you think is the mechanism that operates here when nitrogen dioxide impacts life satisfaction? What's going on?

KNIGHT: Yeah, that's a really good question, and it's way out of the scope of our study that we could do, but through speaking to lots of people about this analysis and reading through the literature, we've kind of come up with four different mechanisms that will influence this relationship. 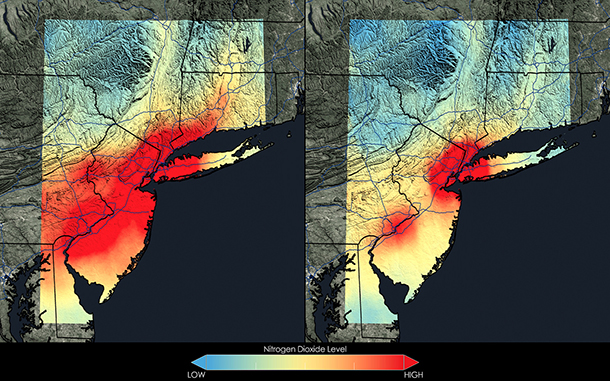 Here in the United States, local nitrogen dioxide hotspots have improved dramatically in recent years. Above, satellite data from NASA shows that the New York City metropolitan area saw a 32 percent decrease in NO2 between the 2005-2007 and 2009-2011 periods. (Photo: NASA)

So, we think firstly and probably by far the most important is through health. So, the way that nitrogen dioxide influences people with existing health conditions and exacerbates and brings on new conditions. So it's been related to cardiovascular and respiratory issues. The second one would be how pollution influences your mental and cognitive health and that kind of development. So, there's been links to things like dementia. So, two very strongly kind of health points. The third we would say definitely through aesthetics - so the look, the smell, the taste of your city and your neighborhood - what it looks like if you see it. Just that kind of walking down the street and you smell that really will impact you and the day that you're having. And then lastly we've been speaking to lots of people just out and about at different public events about this and many people talk about the concern that they have for their family, their children and their own health and more broadly for the environment as well. So, you know, they see this pollution. They smell this pollution. They think, gosh, what's this doing to myself and my children? 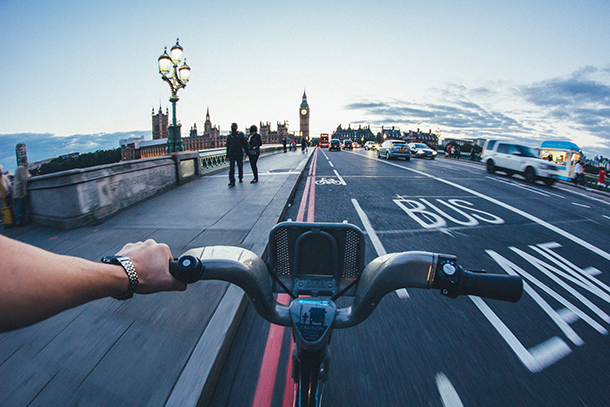 City-dwellers can dramatically lower their exposure to nitrogen dioxide by choosing bicycling and walking routes away from congested areas. The air is typically much cleaner just one street over from a high-traffic thoroughfare. (Photo: Leo Hidalgo, Flickr CC BY-NC 2.0)

CURWOOD: When you speak to people about this, sometimes informally, what is the one or two things that people really want to know?

KNIGHT: There's two main things that people are concerned about and where we've started having conversations with people out and about. The first one is, people are concerned about either what fuel should they be using, as consumers, what decisions should they be making, and they feel they've been getting mixed information over the past few years. The other one is about where the hotspots are and how they can avoid it. 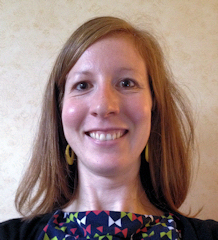 Sarah Knight is a PhD candidate at the University of York.

CURWOOD: So, what do you tell people about the hotspots? Where should people avoid if they're concerned about this?

KNIGHT: Certainly central London, as you would expect. some other large cities around the UK and Heathrow airport as well. So it would be these major centers of traffic and transport. But certainly, you know you're definitely less exposed even if you're just one road off the main road, as it were, in these areas, as it were, so even if you can find kind of quieter routes to where you want to go and cycle and walk those, you're really reducing your exposure to traffic air pollution significantly.

CURWOOD: Sarah Knight is a PhD candidate at the University of York where she studies the impact of the environment on us humans. Thank you so much, Sarah, for taking the time with us today.

KNIGHT: Thank you for having me.


Read the study: “Can clean air make you happy? Examining the effect of nitrogen dioxide (NO2) on life satisfaction”

The Guardian: “Air pollution as bad for wellbeing as partner’s death, say researchers”

Editorial from The Guardian: “The Guardian view on May’s air pollution plan: all mouth, no trousers”