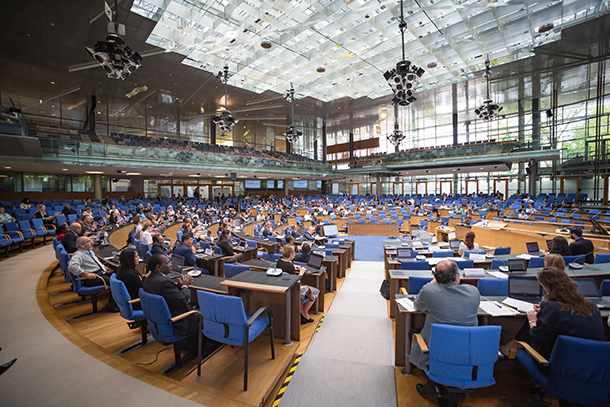 The 2017 Climate session in Bonn, Germany was part of a series of sessions to develop the detailed rules of meeting commitments made under the Paris Agreement. Alleged undue influence of industry lobbying groups was one of the hottest topics. Living on Earth Host Steve Curwood discusses the controversy with Jesse Bragg, the Media Director for Corporate Accountability International.

CURWOOD: From PRI and the Jennifer and Ted Stanley Studios at the University of Massachusetts, Boston, this is Living on Earth. I’m Steve Curwood. The latest round of UN climate talks recently took place in Bonn, Germany, to hammer out some of the granular details of implementing the Paris Agreement. Among the many topics considered was whether corporations are having undue influence on international climate negotiations. The watchdog group, Corporate Accountability International, has been monitoring this issue, and one of their spokespeople, Jesse Bragg, joins us now. Welcome to the program, Jesse.

BRAGG: Thanks so much for having me, Steve.

CURWOOD: Jesse, you were at this recent session in Bonn. How would you characterize the general mood of the negotiations?

BRAGG: Well, I think the uncertainty coming from the US definitely affected the mood. I think initially it affected things in a sort of level of uncertainty around the negotiations in general, but more and more what we're seeing is that countries are ready to move on without the US. Either way, whether the US decides to stay in this agreement or get out of this agreement, there's still going to be part of this agreement for the next four years. Those are the rules. Parties know from what the Trump administration had announced over the last few months that they have the coal industry and the US fossil fuel industry as one of their primary concerns. Parties are now looking at that and saying, ‘You know, stay or go, we need to move this forward without the US and without waiting on the US to get on board.’

CURWOOD: So give us your perspective here -- what do you think is going with corporate lobbying at these UN meetings?

BRAGG: Well, fundamentally, for about 22 years now, there have been no restrictions on trade associations and others representing the interest of corporations at these talks. And that becomes very problematic, especially when you look at some of the corporations these groups are representing – ExxonMobil, Shell, BP – and many of the actors that have been at the center of the climate crisis in funding denial, junk science, and other items that have slowed down the process on climate policy at home and abroad. 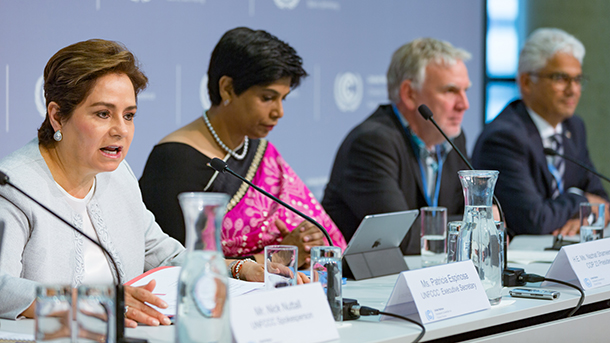 CURWOOD: Now, you're not telling me that all corporate lobbying at these events is designed to subvert the process, are you?

BRAGG: What I'm telling you is that there’s actually ... it would be very to difficult to discern who is and who isn't in the interest of climate policy, and frankly, that's not the role of an intergovernmental process to pick the winners and losers in the private sector. And so we need to be very careful about who is at the table and who isn't at the table and especially not rely on PR and advertisements from the likes of the fossil fuel industry to try to convince us that they have the interests of people and the planet in mind when their actions over the last two decades, at least, have proved otherwise.

CURWOOD: Now, as I understand it, the trade groups, of course, and other interest groups don't actually have a seat at the table. How are they able to court the diplomats and otherwise influence talks?

BRAGG: Well, you look at the example from COP 21. There were numerous examples of side events sponsored by the fossil fuel industry, by energy utilities where they wined and dined delegates and others, decision-makers, presumably toward their agenda. If you look at COP 19 in Warsaw, there was an entire parallel meeting hosted by the World Coal Association where delegates were invited, the head of the Secretariat of the Treaty actually spoke at that event.

CURWOOD: Which countries are championing limitations on corporate influence at the climate talks, and which made some kind of case for maintaining the kind of presence that companies have right now?

BRAGG: The champions of this issue were clearly Ecuador, and actually Uganda. Ecuador spoke representing the like-minded developing countries. Uganda spoke representing the least developed countries block. And actually, Senegal spoke representing the African negotiating group. Altogether, those groups represent far more than 70 percent of the world's population. And so, they were the leaders, but they were supported by Cuba. China spoke very, very strongly in support of these limitations, saying that the voices of the vulnerable are often drowned out by the voices of the rich and wealthy corporate interests. And those who were opposed to this were pretty easy to identify. You're looking at the US, Australia, Russia, and to some extent, the European Union, all places where the fossil fuel industry is based and representing countries that have the most at stake economically with the continuation of business as usual when it comes to extracting and burning fossil fuels.

CURWOOD: Jesse, talk to me about how these discussions in some ways parallel what happened at the Framework Convention on Tobacco Control. This is back in 2003. What can we take away from how that treaty successfully put limitations on the tobacco industry's lobbying at those sessions?


Members of civil society gathered outside the UN meetings to challenge the corporate influence inside the talks.
(Photo: Corporate Accountability International)

BRAGG: It's a great example and a fantastic precedent to look to when you’re trying to figure out how to address industry influence in any policymaking process. When parties, governments, got together to hash out the framework convention on tobacco control, they quickly realized that one of the primary obstacles to their progress was the tobacco industry. You know, it's very easy to understand why the tobacco industry has no incentive to advance public health policy. Every step forward we take in public health and tobacco control means one less dollar in the pockets of tobacco industry. And so, they brought forward a really bold proposal, it was one line of text initially that just said that parties need to take steps to reduce the influence of the tobacco industry over public health. And since then, the implementation of this treaty has taken off. And that's really the model we need to look at when we're talking about the fossil fuel industry and climate change. We need information from them. They have a role. But we also need to limit their influence and understand that they shouldn't be writing the policy by which they need to abide.

CURWOOD: What corporate associations are exercising the most undue influence on the climate talks in your opinion?

BRAGG: The two organizations that really stood out in terms of influence over these recent talks were the International Chamber of Commerce and the US Chamber of Commerce. The International Chamber of Commerce, their role is really to keep the door open for businesses around the world. They believe, and they're very proud of it, that corporations, including the fossil fuel industry, need to be at the table helping parties write the rules that we're going to implement the Paris Agreement under, and so in that way they take every opportunity to advance and expand the access of the private sector. The US chamber actually held a side event at the UNFCCC talks in which they said that US fossil fuel corporations are going to be central to this process as well. One of their representatives actually then went on to say that the US is going to need to revise down its commitments to the Paris agreement, and more or less said that, people need to get used to that, that that’s the way it was, really towing the line of the Trump administration that these commitments need to be reviewed.

CURWOOD: Now, under the Paris agreement, the fossil fuel industry will be selling their products perhaps as late as 2050. It will take a while to phase out what they do. If they are, in fact, going to be part of the energy mix going forward as they are right now, why shouldn't they have some input into these negotiation processes so that they can deal with their business in an orderly fashion?

BRAGG: I think there's a big difference between having input and being part of a process, and what governments have been saying and what the sort of broad campaign around this is calling for, is to draw that line. When are we gathering input from those industries we're seeking to regulate and when are we actually allowing them to be part of the policymaking process? And so, certainly there's going to be a great need to consult with the industry and gather information from the industry as needed as we’re developing the implementation of this agreement, but the question here is not whether or not we need input. It's whether or not they should have a role in writing the rules, and that's what this discussion was about. 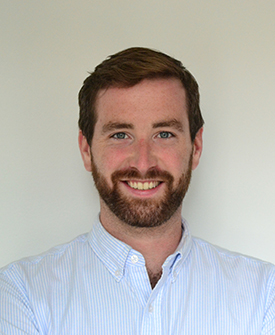 CURWOOD: When can we expect some sort of formal limitations to be agreed upon in terms of corporate lobbying at the UN climate meetings, if ever?

BRAGG: Well, it's a long process. Decisions are made by consensus at the UNFCCC, which means you need more or less the vast majority, if not all governments to agree, and so while that is a great process because it's inclusive, it does mean that things take time. We know the next milestone for this movement is next meeting in Bonn in May next year, so 2018, where parties will refer to submissions that governments and civil society groups have made on this issue and chart a path forward.

CURWOOD: Jesse Bragg is the Media Director of Corporate Accountability International. Jesse, thanks so much for taking the time with me today.

BRAGG: Absolutely. Thanks so much for having me, Steve.