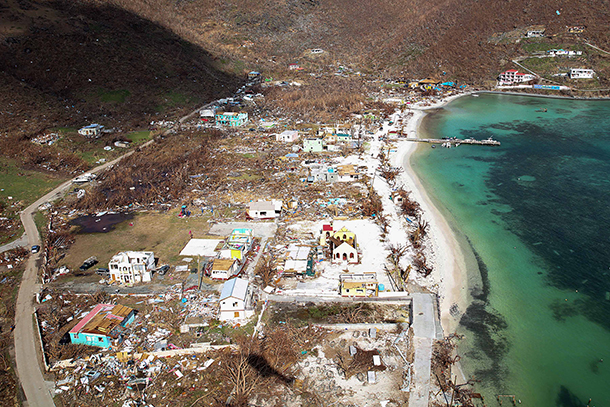 The devastation of the island of Jost Van Dyke – part of the British Virgin Islands – after Hurricane Irma. (Photo: DFID, Flickr CC BY 2.0)

Smashed and battered by the record-breaking Hurricane Irma, many small Caribbean island nations and territories now face the monumental task of rebuilding much of their infrastructure. For insight on how islands can rebuild, and how every nation can embrace mitigation measures that reduce the threats of extreme weather, Host Steve Curwood spoke with former Grenada UN Ambassador and former Special Advisor for the UN Sustainable Development Goals, Dessima Williams. She says the Caribbean people remain resilient and self-reliant, but global action on climate change is more urgent than ever.

Hurricane Irma was most deadly during its Category Five rampage through the Caribbean, smashing the Leeward Islands from Barbuda to Antigua to St. Thomas before scalping the north coast of Cuba. That meteorological monster set records for size, strength, and endurance, records that experts predict will be broken sooner rather than later as global warming continues to heat the oceans and intensify precipitation cycles. And while Florida and the Southeastern US also suffered, these Small Island States - SIDS as they are called in UN climate negotiations - also have the smallest financial capacity to recover and rebuild.

Dessima Williams served as Ambassador for Grenada and as a special advisor for Sustainable Development at the UN, and she joins us now. Ambassador Williams, Welcome to Living on Earth.

WILLIAMS: Thank you very much.

CURWOOD: You're from Grenada, Dessima. What's it like to live in a place where, increasingly now, one can expect these just horrific storms? 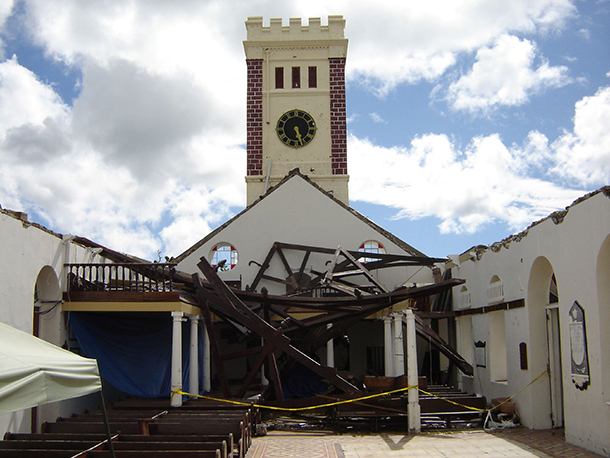 A cathedral in St. Georges, Grenada that was wrecked by Hurricane Ivan in 2004. (Photo: Ian Mackenzie, Flickr CC BY 2.0)

WILLIAMS: [LAUGHS] I suppose it's like living in New York City where one can expect, you know, gunshots anytime, anywhere. You don't dwell on that. Fortunately, for us, we have many alerts. We've got good systems in place, but you have to change your thinking and change your lifestyle. So, as I said, the way we construct our homes, you know, the way we understand the land. And we see the changes right before our very eyes, but it's a healthy and beautiful and embracing environment and people live more with the positive than with the fear.

CURWOOD: So, Dessima, in what ways is the Caribbean particularly vulnerable to big storms, and what protections and safeguards do some of these islands have that might surprise people?

WILLIAMS: The best protection is people's intelligence and their resilience, and when a disaster hits they have to behave in ways that they can rebound, and you see that. I want to go back to 2004 when, I think, we began this series of intense categories - three, four and five - hurricanes. If you recall how Hurricane Ivan devastated the region, particularly my own country Grenada. 89 percent of all physical structures were either destroyed or damaged, 89 percent, 204 percent was the worth of the GDP loss. That is, everything we owned we lost it twice times over. Now, we've come out of it, and, I think, as intense and destructive as we have seen Hurricane Irma, we will come out of it. But, the question is, did we have to go through that, and at what price will we rebuild?

CURWOOD: So, how do we rebuild after the storm?

WILLIAMS: So, the Caribbean has been responding in a more intelligent way. How we build? We build back better after the storms. We are doing, for example, in agriculture, we are doing climate smart agriculture. That is, planting crops like cassava that endure droughts and floods and are there for food, as opposed to just planting tree crops and, with the first hurricane, it's all gone. So, it's a mix.

On our part, we have to do things better, but I tell you the biggest help is for us to change our lifestyles in the industrial and developed countries where the emissions of carbon really damage the seas and the environment and create this havoc.

CURWOOD: Talk to me a bit about the governance in the Caribbean, in responding to these devastating storms. I mean, we have colonies. Some would say that Puerto Rico is an American colony, the U.S. Virgin Islands an American colony. The French have Saint Martin, and then, of course, there are the independent autonomous countries that have been hard hit. I'm thinking of Cuba. I'm thinking of Antigua. How has the response to the hurricanes been different in those countries both internally and the response from the, the world outside? 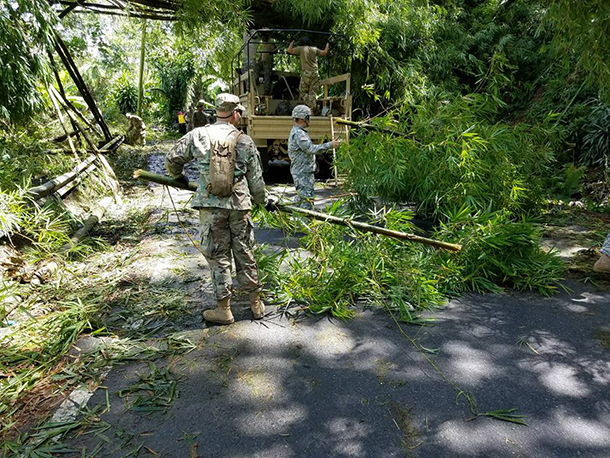 WILLIAMS: For those that are still colonies, Saint Martin, Saint Barts, and British Virgin Islands, the metropolitan governments are probably more capable of responding because their resources are massive and they can persuade, maybe, their parliaments to do reconstruction in a manner that suits the colonies. In the case of the independent countries, it's much harder because many of these countries are already highly indebted, in large measure because of the cost of rebuilding from hurricanes.

In the international community, there are agreements that envision that and call for international support and cooperation. The Addis Ababa Action Agenda, the Paris Agreement on Climate Change, the Sustainable Development Agenda 2030. All make provisions for financial support. So, I think that the conversation now has to get started. In the case of the Caribbean it's very difficult because you're looking at countries that have not fully recovered from the economic crisis of 2008, and from the repeated battering from hurricanes. So, I would not be surprised if special measures have to be put in place about the existing debts and the reconstructing.

CURWOOD: How do you expect these big storms will impact the tone or direction of future climate negotiations? I'm thinking there's a big meeting coming up in Bonn in November.

WILLIAMS: Well, this big meeting in Bonn in November, in fact, is chaired by president from a small island state. It is being chaired by Fiji, and the presidency has insisted that the issue of SIDS, small island developing states, will be featured across his one year presidency of the COP. So, I can assure you that there will be much attention to the small island states, not just that they are vulnerable, which they are, but that they are leading their own development with resilience.

There is the green economy, which is agriculture in a particular way, energy in a healthy way and so on, but there is also the blue economy, which is the use of the ocean resources by the ocean countries which by and large many SIDS. So, I think you will see in the negotiations on the one hand call for adaptation support, but on the other hand the countries are mitigating to the extent that we need to because we are not the big violators in the carbon emissions here, but we are transitioning our economies, both in terms of not depleting our resources, using renewable energy. So, those opportunities that SIDS are taking themselves will be put on the table for consideration for the next year of the climate leadership. 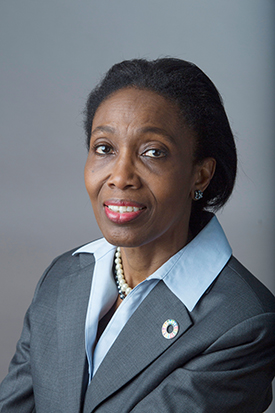 Ambassador Dessima Williams just completed her term as Special Adviser for Implementation of the Sustainable Development Goals. (Photo: Courtesy of the United Nations)

CURWOOD: What effect do all these storms and flooding have on political stability?

WILLIAMS: Well, it doesn't make it easier for governance because, you know, there's a lot of distraction instead of, you know, worrying about building schools and, you know getting new innovative methods in health care and so on. We're back to basics, and I think it can, in fact, open up new conflicts or old ones.

What we have seen, however, in the Caribbean region is a great coming together across political lines in the immediate aftermath. Not all storms lead to conflict. People have, yes, questioned if their governments have done all they could for preparedness or response or reconstruction, but it hasn't led to the unraveling of the political system or the social cohesion, both of which we need for good reconstruction.

CURWOOD: So, Dessima Williams, you’ve been involved with the climate negotiations for a couple of decades now. What you're seeing right now in these storms, your home territory, the Caribbean, how surprised are you to actually see these massive storms start to move through?

WILLIAMS: Well, I recall years ago when my country Grenada was leading the small island states, and we were arguing that what we will see in climate change, if we don't act in a decisive and urgent manner, is a level of unpredictability and randomness that we could not necessarily control. We've included in the Paris agreement to strengthen global temperature rise, to keep it well below two degrees. We, in the islands, we've argued for well below 1.5, and I think, I'm sorry to say that, but, we are proving that our arguments or our clarion calls were correct, that in fact, we must act urgently because the impacts are going to be first on us, hardest on us as small island states, but it is going to be widespread, and I think the floods from Houston to hurricanes in Florida also suggest that it's not just the islands that will experience this level of climatical chaos, that it is spreading.

CURWOOD: Dessima Williams is an ambassador from Grenada and stepped down recently a special advisor for sustainable development goals at the United Nations. Thanks so much for taking the time with us today.

WILLIAMS: Thank you. Thank you very much.


Dessima Williams, former Ambassador of Grenada to the United Nations