The Everglades After Irma 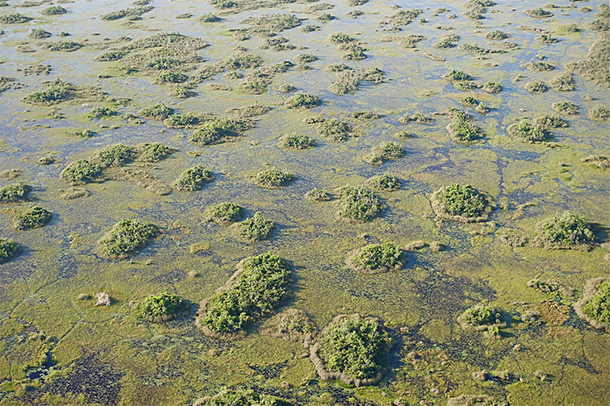 In some parts of the Everglades, “tree islands” arise in the wetland grass landscape. (Photo: vladeb, Flickr CC BY-ND 2.0)

As well as devastating Florida communities, Hurricane Irma blasted an estimated three to ten feet of storm surge into the Everglades. This “River of Grass” extends from Lake Okeechobee in central Florida down to its southern tip at the Gulf of Mexico, and much of it is a National Park. Host Steve Curwood asked University of Maryland hydrologist Fernando Miralles-Wilhelm how the hurricane’s storm surge and severe downpours, added to the steady rising of the seas, could affect this threatened ecosystem. Professor Miralles-Wilhelm says draining and channelizing the wetlands through decades of development weakened the Everglades’ resilience and ability to buffer storms.

Hurricane Irma left a huge human and built environment toll in its devastating wake, and it also roared through the fragile Everglades, the vast subtropical wetland known as the “River of Grass” that covers the southern 20 percent of Florida. It’s a UNESCO World Heritage Site, and part of it is a National Park, but the Everglades ecosystem is now about half of its original area since people started draining it for development and agriculture in the 1800s. And intense hurricanes have also had an impact.

We turn now to Fernando Miralles-Wilhelm, a hydrologist at the University of Maryland. Professor, welcome to Living on Earth.

MIRALLES-WILHELM: Thank you, thanks for the invitation.
CURWOOD: First, just briefly describe what kind of ecosystem the Everglades is and some of the species that thrive there.

MIRALLES-WILHELM: Right. So, the Everglades is a wetland. It's essentially a land that naturally wants to be wet. It’s a very rich ecosystem with anything that goes from the Florida panther all the way down to snail kites and small fish and the Seaside Stable sparrow, so it's a very rich ecosystem both from the fauna and the flora point of view. 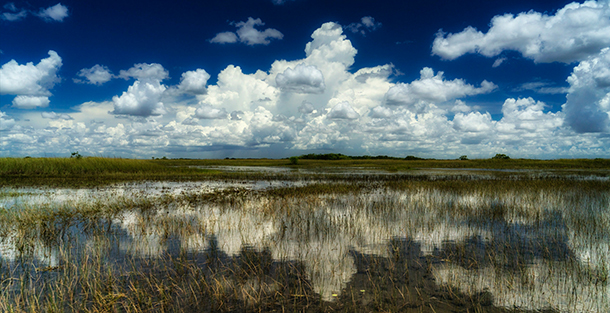 The Everglades is known as the “River of Grass” (Photo: Rick Schwartz, Flickr CC BY-NC 2.0)

CURWOOD: So, people like to call the Everglades the River of Grass. Why is it a river of grass?

MIRALLES-WILHELM: It's a river of grass because, in its natural state, water flows as a very shallow sheet, very slow moving, through the vegetation which naturally was primarily grass until you reach the coastal areas, and the vegetation there starts to change. So, if you actually look at the Everglades from above, from an airplane or from further out, what you see is a very expanse matrix of grass, you know, with some little bits of trees here and there, and these are the natural parts of the Everglades that still exist. If you look at the history of the Everglades, in particularly how it relates to development in south Florida, the Everglades were drained systematically in order to develop the land, places like Miami and inland and south of Miami and also north of Miami, so Fort Lauderdale, West Palm Beach. These were areas that actually were developed through draining the Everglades.

CURWOOD: So, given that the Everglades goes between fresh and salt water at that threshold, what kind of impact could that storm surge that was brought by Hurricane Irma had on the Everglades?

MIRALLES-WILHELM: If you think about the storm surge, it's almost like nature trying to restore, in a very accelerated way, the natural processes in the Everglades. Fresh water flows from Lake Okeechobee south and gets discharged as a very slow moving sheet to the coast. That was balanced by the coastal environment, which is the boundary with the sea, sort of created this interface between fresh water and salt water. What has happened is that with all this development is we have created a number of pulses, much larger than natural, of fresh water into the coast and this has affected the marine ecosystem. So, what these storm surges are doing is that they're sort of bringing all of a sudden large amounts of salt water back, and sort of trying to recreate that interface that we have lost. Now, doing it in such a sudden way, through one of these extreme storms, Irma and others that have happened in the past, it's of course not the ideal way to restore a natural ecosystem. But that is nature sort of coming back at you in a way.

CURWOOD: What do we know at this point about approximately how much storm surge in the Everglades was experienced as Hurricane Irma passed through?

MIRALLES-WILHELM: We're seeing numbers from as low as three feet and as high as more than 10 in different places. It's not trivial at all. 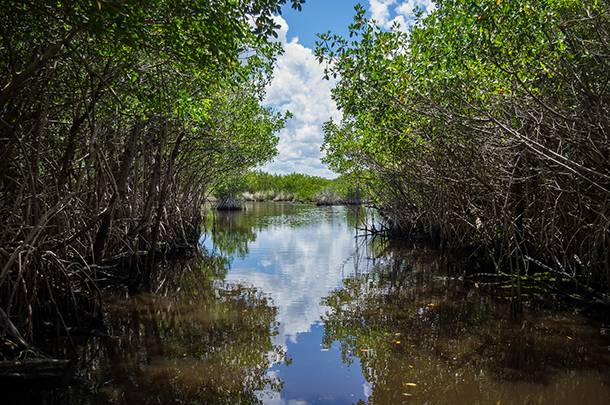 CURWOOD: Fernando, Irma also brought a lot of rain. To what extent do downpours affect that fresh-to-salt water balance in the Everglades, and how much could the wetlands actually benefit from all that rain as well as the storm surge?

MIRALLES-WILHELM: So, the other part of storms like Irma is, of course, is the fresh water that's poured on top of the wetlands. So, imagine what's happening at the same time. You have lots of fresh water falling on the wetlands and trying to get out to the coast because of the topography and because of these channels are there, and then the storm water surge bringing in seawater in. And so, you have these two, sort of like a collision of waters. You have fresh water trying to get out, salt water in. The dynamics of that interface and where it is, between the fresh water and salt water, has likely changed, pre- and post-Irma.

For places that gain fresh water, you know, the fresh water species will tend to thrive. And, you know, there are a few species like that, vegetation-wise that thrive, and the grasses are one example. So, grasses like to be inundated. Trees, on the other hand, don't like to be flooded. Then, on the other hand if you look at the salt water piece, species that like salt water like mangroves, like some species of fish, will thrive. So, you could see, and we've seen this before, sort of a redistribution of vegetation across the Everglades.

CURWOOD: Of course, if Florida is known for its alligators and, at the very southern edge of the Everglades where it starts to get pretty salty, there are crocodiles. With the increased salinity how much more risk is there from crocodiles moving upstream as it were? 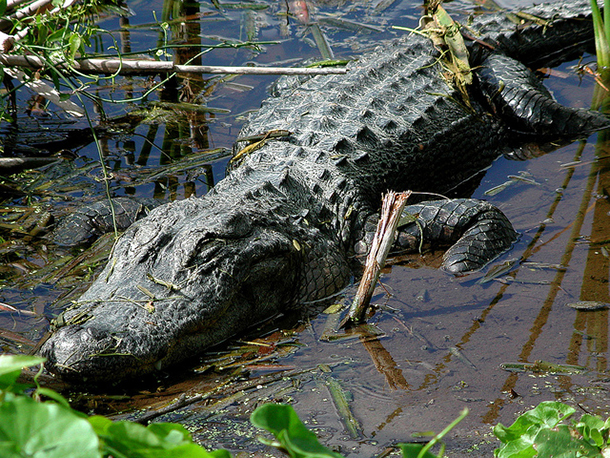 MIRALLES-WILHELM: I mean the risk is there. We haven't done that analysis yet. We haven't started collecting data yet. We'll know a lot more over the next few weeks to months.

CURWOOD: And I ask about crocodiles because, as you know alligators are, well, they're relatively laid back in comparison to even the American crocodile which, you know, seems to start its day thinking, “I need to get a meal or several before it's over.”

CURWOOD: Fernando, how have human activities that disrupt the natural hydrologic cycle in the Everglades weakened the Everglades resilience in the face of a changing climate?

MIRALLES-WILHELM: Right, so this story is fairly straightforward. If you look at a map of south Florida or even if you actually look at it from an airplane when you fly into Miami or Fort Lauderdale, what you see is these canals that run from the urban locations to the coast, and what we actually have built is a very sophisticated network of canals that was designed to get water out of the system as quickly as we needed to, in order to not flood, in order to be able to build, make land available for development, etc. When we built those canals, we're essentially short circuiting the slow-moving, natural flow of water that occurred before. We have accelerated the drainage, and we have reduced the ability of the system to hold the water and to be that buffer.

And I think the new vision and the vision that we have missed in all these decades is that the Everglades could have been used to co-exist with the urban development that took place. I think we decided collectively not to live with the water. We decided we wanted the water out, and what that has created is that now we are trying to say, well, “How can we start living with the water?”

CURWOOD: Now, Professor, I understand that you lived in and taught in Miami for a decade, and you recently were one of the authors of a scientific review of the progress that's been made in restoring the Everglades. Please, just take a moment to give us a brief overview of why the Everglades is already undergoing a decades-long restoration.

MIRALLES-WILHELM: So, you have this balance that we've broken, that we’ve made fragile. So, the overall Comprehensive Everglades Restoration Plan, or CERP, as it's called, was authorized by Congress back in 2000, and it's been ongoing ever since. The project is really more like a program because it's got over 60 large scale projects. So, the purpose of the CERP is to try to restore some capability of the system to sort of hold water in a way that you could protect the south Florida region both from floods and droughts and provide that buffer, which is just what the wetlands, the natural wetlands, used to do. A hurricane is not always going to be like Irma. Irma is just the one that's fresh in our minds because it just happened. Every storm has a distinct set of characteristics, and we need to be prepared to deal with this range of variability and the Everglades, the wetland, is our best bet to be able to deal with this variability, so we have to see the Everglades as our best friend.

CURWOOD: Professor Fernando Miralles-Wilhelm is a hydrologist at the University of Maryland. Thank you so much, Professor, for taking the time today.

MIRALLES-WILHELM: Thanks very much.

Gizmodo: “Why the Everglades Might Never Look the Same After Hurricane Irma”