Eyes in the Sky For Nature 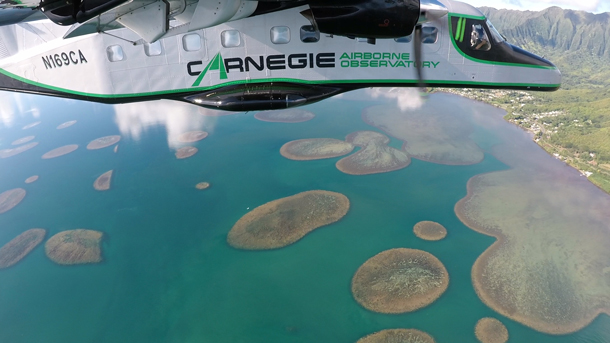 From satellites and aircraft scientists can examine the structure of ecosystems, even their chemical properties, to determine their health. Stanford ecologist Greg Asner helped develop a system of specialized scientific instruments for aircraft, and was recently recognized for these contributions with the 22nd Heinz Environment Award. Host Steve Curwood and Greg Asner discuss how this ultra high resolution remote sensing can help inform policy to protect natural resources like carbon-sequestering forests, and how the next frontier is to put this technology into orbit.

CURWOOD: High-tech, remote imaging developed for the military is also now a powerful tool in the hands of scientists studying the health of ecosystems. Remote forests and coral reefs can be assessed from satellites, and specially equipped aircraft can get an even closer look, down to individual branches of trees. Greg Asner, Principal Investigator at the Carnegie Institution’s Global Ecology Lab at Stanford helped develop an ultra-high-resolution imaging system for aircraft that won him the 22nd Heinz Award in the Environment category. He joins me now. Greg, congratulations and welcome to Living on Earth.

ASNER: Thank you for having me. It's great to be here.

CURWOOD: Hey, let's start by talking briefly about this plane that you've tricked out with a lab inside. It's this short takeoff and landing machine called a Dornier 228, I think. Now, usually if you've got one of those you're like out in the middle of nowhere and they roll it up to fly you from one remote location to another, like maybe 20 seats. But what do you have in one?

ASNER: Right, what we've done is we've gutted the plane down to the skin and the shell of the plane, and then we built back up a high tech laboratory inside. Think aluminum, carbon fiber, think lightweight materials, and also think instruments and supercomputing capability onboard.

CURWOOD: Talk to me about the instruments that you put in there. I think you have an acronym, ATOMS. What does ATOMS stand for?

ASNER: ATOMS is a name that I gave to it back when we first built the system. It stands for Airborne Taxonomic Mapping System. ATOMS is comprised of a suite of instruments that work together. One of the instruments is a laser scanning system. We fire laser beams out of the bottom of the plane, and those lasers interact with the land, the trees, whatever we’re flying over. Those lasers give us a three-dimensional view of the ecosystem. That would be how tall are the trees. What's the architecture of the branches? And it tells us about even the leaf-level architecture. And then we have other instruments that work with that. Some of those are called imaging spectrometers, and for that we use sunlight that bounces off of, for example, the tree canopy and we can measure the chemical composition of those trees as we fly over with those spectrometers. And finally we have some high-resolution cameras that allow us just to collect the background information about, you know, what did we do that day, what did we fly over. It gives us a reference.

CURWOOD: So, tell me what kinds of features of the landscape can you image with this technology?

ASNER: We've been focusing on forests. We're using our technology to understand the composition of the forest. When we say composition, we're talking about how much biomass is there. We're also talking about how many species are there per acre, and we're also talking about the health of the forest, so how much water is in the tree canopy, nitrogen, the building blocks of life. Lately, we've also been doing that with coral reefs, and we just had a breakthrough last year where we figured out how to fly over a coral reef and digitally remove the seawater so that we exposed the bottom and we were able to understand the health and the condition of the corals that live below that sea surface.

CURWOOD: Where have you mapped in the world so far?

ASNER: Well, we've been all around the planet. The places we've put our most emphasis have been on regions that are undergoing rapid development. We think that our science and our technology can play a role in mapping, for example, the attributes of a forest in a way that allows for better decision-making in the context of development, in the context of, say, putting in new agricultural fields and avoiding areas of high biodiversity. We're good at mapping where is that biodiversity and then helping governments make decisions about how best to develop around it. We also work on National Park development and other types of protected areas. All of that work has been in Latin America, Central America. We're just now finishing a big project in Southeast Asia, in the country of Malaysia. Lots of work in South Africa, Madagascar, you name it ... dotting the planet all the way around, but really focused in developing regions. 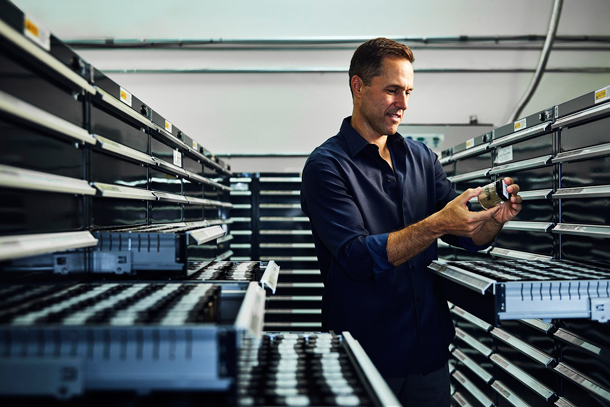 CURWOOD: Briefly, what have you found?

ASNER: Well, I call it the good, the bad, the ugly. We found extremely high biological diversity, and what that means is lots and lots of species coexisting in patterns that were unknown to science. And so, you know the good thing is that we're able to unveil those landscapes and see them for the first time. The bad would be when we our work reveals that there are, say, illegal gold miners in a region and then the ugly is some of the hardest work we do which is mapping regions in preparation or in consultation for the effort to mitigate losses as climate change proceeds. I call that ‘the ugly’ because those are really hard problems to crack. That science is in its infancy and we're still trying to figure out how to do it.

CURWOOD: Greg, a key reason that the Heinz award has been the one given to you this year for the environment is because your research has helped inform some policies and enforce some existing laws. Please, give us some examples of how that's worked, in California and in Hawaii, as I understand it.

ASNER: Yeah, well, in California we've been working closely with state and federal government agencies. We got into the process of flying the forests of California, working with agencies, and helping them understand the impacts of the mega-drought that we just went through. That work that we did, and it continues today, has helped the state government understand where to put people on the ground, for example, fire mitigation, watershed management, and biodiversity protection with the National Parks and with the state parks.

In Hawaii, we're working heavily on coral reef, we're looking at the recent bleaching events from the hot water that's come into the region and also other issues that have crept up as fine a scale as the types of sunscreens people are using. They put it on their bodies, and they go swimming and some of those sunscreens are extremely toxic to coral reefs.

CURWOOD: How useful is your technology to understanding the carbon flux, the carbon balance in forests and other ecosystems?

ASNER: That's been where a lot of our work has focused over the years. Some of our most operational, mature type of science is the issue of how much carbon is stored in any forest that we fly over. Today, we're able to fly over a forest and relatively quickly get an estimate of the carbon stock, and that's important for a lot of reasons. One, carbon is a great metric of the health of a forest. A forest with lots of carbon stored generally is a forest that's in good shape. But also, it's a critical component of the climate change mitigation efforts of state and federal governments. They want to be able to store carbon in forests rather than it being in the atmosphere as carbon dioxide, so they want to know how much they're storing in these forests today and they want advice and consultation and guidance on how they might store even more carbon in their forests in the future.

CURWOOD: Greg, what's going on in terms of federal funding to support the kind of work that you're doing, especially advancing it to the level of flying satellites that might be able to get the same information that right now you have to kind of bump along in the prop plane to get. 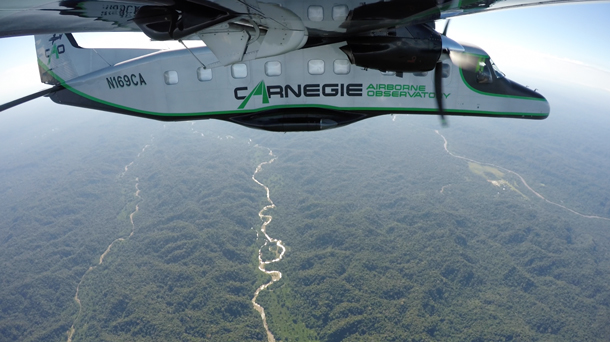 ASNER: [LAUGHS] There have been great efforts within NASA to put some of the technology into orbit. There is a pathway to get the laser technology up onto the space station. We should see that happening, I think, about a year and a half from now. The chemical mapping is the most critical at this point in terms of mapping the health of coral reefs and ecosystems in general on land and in the sea. Those technologies are of interest to organizations like NASA and the federal government side, but I think that some of the demand hasn't been clear enough to really put it into orbit. But at the same time I'm very happy to see the philanthropic and the commercial sector stepping up to want this technology to go into orbit. It might be that we get to orbit first via those non-government pathways. I'm working all of them trying to find the fastest way to get up there.

CURWOOD: Greg Asner is principal investigator at the Carnegie Institution's Global Ecology Lab based in Stanford, California, and recipient of this year's Heinz environment award. Congratulations.

ASNER: Thank you very much.

About the Carnegie Airborne Observatory