Burmese Pythons have been known as invasive species in Florida for quite some time, but scientists worry that they may be displacing the American Alligator as the top predator in Everglades National Park. (Photo: Lori Oberhofer, National Park Service, Public Domain)

On this week’s Beyond the Headlines, Host Steve Curwood and Peter Dykstra discuss an invasive species slithering and strangling its way to the top of the Everglades food chain, and the EPA’s attempted cover-up of a report flagging drinking water contamination. Later, they venture back in time to 1978, when a flood damaged a small town in Wisconsin and prompted the residents to move downtown out of the floodplain.

CURWOOD: The flood of news never seems to slow down, so that’s why we call up Peter Dykstra to get a look beyond the headlines that occupy so much of our attention. Peter’s an editor with Environmental Health News, that’s EHN.org and DailyClimate.org. On the line now from Atlanta, Georgia, hi there Peter. What’s going on?

DYKSTRA: Hi Steve. You know, there are a lot of invasive species stories. Some of them cause a lot of damage, some of them are just gross. So, what’s your favorite?

CURWOOD: You mean my least favorite? You know, that Asian Carp getting into the Great Lakes and really trashing everything. I think that’s the one that kind of gives me the willies.

DYKSTRA: The Asian Carp is an oldie but goodie. Another one is the Brown Tree Snake in Guam, a native of Indonesia that came in and basically ate every bird on the island of Guam. But the ones I want to talk about today are the Burmese Pythons in the Everglades. It’s not a new story, but there’s a new element to it -- according to the Miami Herald -- that we’ve never seen before, as far as I know. Burmese Pythons are replacing the American Alligator at the top of the food chain in the Everglades. We’ve never seen an invasive species come in and be king.

CURWOOD: Wow, pythons in the Everglades. How did they get there? 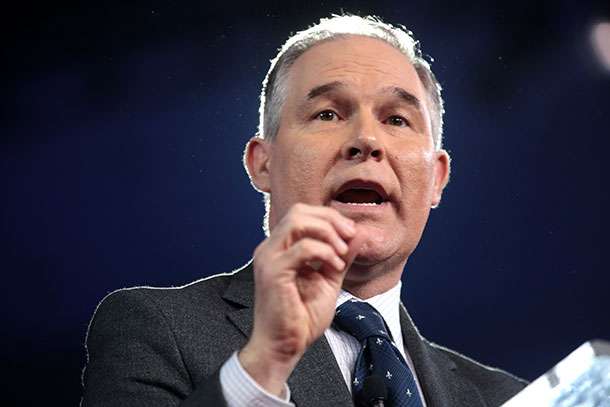 Scott Pruitt, head of Environmental Protection Agency, is seen here speaking at the 2017 Conservative Political Action Conference (CPAC) in National Harbor, Maryland. Pruitt and the EPA are in the news again, this time for a leaked memo that showed the agency tried to stop a report on toxic chemicals from going public. (Photo: Gage Skidmore, Wikimedia Commons CC BY-SA 2.0)

DYKSTRA: A lot of hobbyists and pet owners would get an adorable little Burmese Python, not thinking that they might grow over 10 feet, they might even grow to 18 feet. Once you get an 18-foot snake and you don’t want it anymore, it’s a little hard to flush it down the toilet. So, folks take it out to the Everglades, let it loose. It’s an ideal habitat and they reproduce like crazy. Scientists have no idea, but there could be as many as tens of thousands or even hundreds of thousands of Burmese Pythons loose in the Everglades. Several of them have been spotted actually trying to strangle and eat alligators in recent years.

CURWOOD: Oh my. Hey, what else do you have for us?

DYKSTRA: Let’s go to Washington D.C., where the EPA and the White House appear to have pressured another agency to sit on a report citing serious public health risks from a group of chemicals called Perfluoroalkyls, or PFAs. The EPA said in a leaked memo that they could be a public relations nightmare. They seem to be more worried about that than that they could be a public health nightmare.

CURWOOD: So, what’s the danger from these PFAs?

DYKSTRA: PFAs are known to be a cancer risk, they’re an endocrine disruptor, and they can cause other harm during the reproductive process. They’re used in carpeting, in frying pan coatings for non-stick frying pans, and they’re used in fire suppressants, and have been found in 1,500 drinking water systems throughout the country and they risk the drinking water quality on 126 military installations.

CURWOOD: Where of course they must have used a lot of fire suppressants. Hey, what do you have from the history vaults this week? 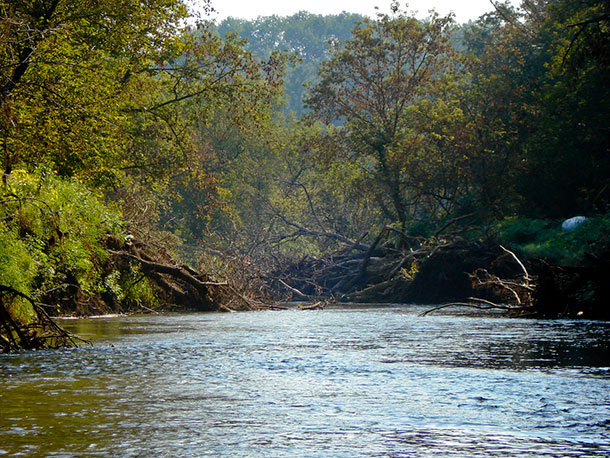 The Kickapoo River has long been known to flood its banks. Damage from the 2008 Wisconsin floods are seen here on the Kickapoo at Wildcat Mountain State Park in Ontario, Wisconsin on Sept 20, 2008. (Photo: Ryan Rowley, Flickr CC BY-ND 2.0)

DYKSTRA: Soldiers Grove, Wisconsin. A little town in the southwestern part of the state. Picturesque, riverside town. A lot of people come to visit because it’s on the banks of the Kickapoo River. And the problem throughout the 20th century is that the Kickapoo River itself kept visiting downtown Soldier’s Grove. They had at least a dozen highly damaging floods. In the 1970’s, the town fathers and mothers decided they wanted to push for help from the feds and the state of Wisconsin to move the entire downtown area uphill and out of harm’s way of floods. They were in the middle of discussing this, the federal government was dithering, when the worst flood of all hit on July 3rd, 1978, heavily damaging downtown Soldiers Grove. That did finally get the measure passed. They moved the downtown uphill. The former downtown area is now a park, and just in the nick of time, because floods in 2007 and 2008 were even worse: the worst of all time. They flooded a park, but they did minimal property damage.

CURWOOD: A wonderful example of thinking ahead. Thanks, Peter! Peter Dykstra’s with Environmental Health News, that’s EHN.org, and DailyClimate.org. We’ll talk to you again real soon.

DYKSTRA: Okay Steve, thanks a lot. Talk to you soon.