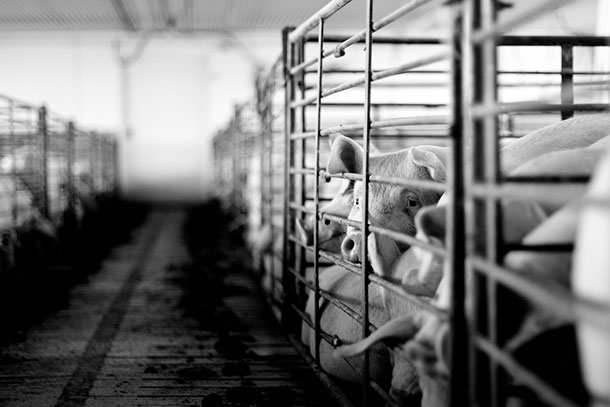 Hog farms are abundant in North Carolina and can cause unwanted disturbances such as flies, stench and pollution from the trucks used to transport hogs. (Photo: Kevin Chang, Flickr, CC BY-NC-ND 2.0)

Peter Dykstra and Host Jenni Doering discuss a $25 million award for the neighbors of some foul-smelling North Carolina hog farms, and the high risk of a disastrously low Lake Mead. In the history lesson, they look back to the gruesome incident a century ago that led to the famous 1976 movie, “Jaws,” and the craze of shark-phobia that followed.

DOERING: We turn now to Peter Dykstra. Peter’s an editor with Environmental Health News, that’s ehn.org and dailyclimate.org. On the line from Atlanta, Georgia. Hey there Peter, how you doing?

DYKSTRA: Oh, hi Jenni. We’re going to talk about a bit of a turn of the tables down in North Carolina, where the hog industry has really held sway over state politics. They just managed to get a law passed in the legislature to make it more difficult to sue hog farms in state court for the nuisance they cause in terms of pollution and smell and everything else. But in a federal court, a jury just awarded 25 million dollars to hog farm neighbors in Duplin county, which is ground zero for the hog industry, for all the trouble that they cause their neighbors. 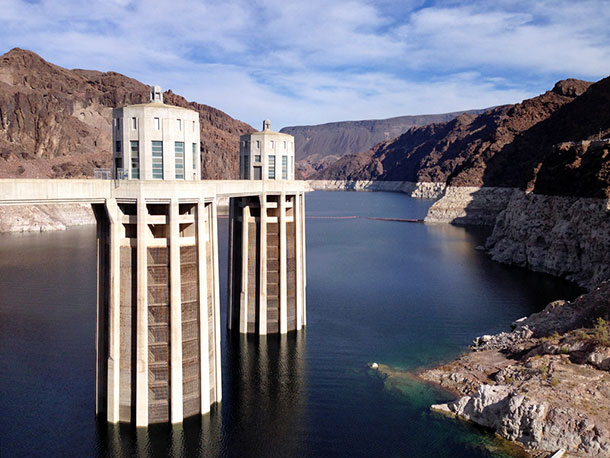 On the Colorado River near Boulder City, Nevada, the Hoover Dam holds back Lake Mead, the largest reservoir in the United States by volume. (Photo: Steve Boland, Flickr, CC BY-NC-ND 2.0)

DYKSTRA: The trouble can be anything from flies – you have tens of thousands of hogs, they tend to draw flies for the waste lagoons there – and those waste lagoons stink. Anyone who’s ever driven down I-95, the main highway of the east coast, that’s the place where you have to roll up the windows in North Carolina. There’s also a lot of truck noise and pollution from trucks and from the whole hog process in general.

DOERING: Sounds like a lot of stink for making some bacon.

DYKSTRA: Yeah, there are nine million hogs in North Carolina. That’s nowhere near the biggest – the state of Iowa has 21.8 million hogs. The industry is growing, and even the hogs are growing. The individual hogs are bigger than they used to be.

DYKSTRA: Let’s go out to the desert Southwest, the arid area that relies so heavily on the Colorado River. The Bureau of Reclamation, the federal agency that oversees western water, says that there’s an 80 to 90 percent chance that with low rainfall and a heavy drawdown on the Colorado River, we can see a crisis on the river and on the nation’s largest reservoir, Lake Mead.

DOERING: Gosh, that does not sound good. That’s a huge risk.

DYKSTRA: Yes, states are working on a drought plan, but there have been – there’s been a lot of fighting, as there always is over water. Lake Mead and the Colorado are key not just to the growing human populations but to agriculture. Southern California, including parts of LA – you know Las Vegas has for decades been one of the biggest boom towns in the United States, Phoenix and Tucson as well – these towns are expecting to grow, they’re going to need water. They don’t have it.

DOERING: Yeah, but we got to keep the fountains flowing at the Bellagio.

DYKSTRA: At the Bellagio, the golf courses. And of course, we’re dealing with a situation that’s almost analogous to the financial crisis – when banks were said to be too big to fail, and the feds came up with enough money to rescue the banks. Well, I’ll tell you what, there are no new sources of water for the Colorado River and Lake Mead. And for the Southwest, they’re too big to fail. 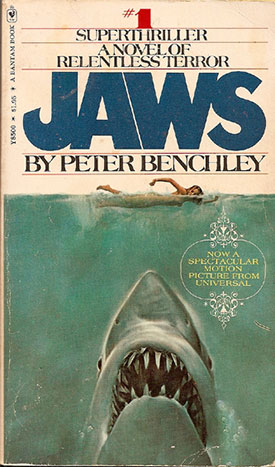 The original cover artwork for Peter Benchley’s novel “Jaws,” which was inspired by a series of shark attacks in New Jersey in 1916 and later led to the 1976 hit movie of the same name. (Photo: Roger Kastel, Wikimedia commons, public domain)

DOERING: So, Peter, what’s up in the history calendar this week?

DYKSTRA: Let’s go back to 1916, a little bit before we had the institution we now know as “Shark Week.” But there was one back even before the US got involved in World War I. July 12, 1916, a young swimmer was bitten in half in a tidal creek in the Jersey Shore.

DYKSTRA: One of four deaths that summer. Really freaked people out in New Jersey about the risk of sharks. Interesting, it kind of went away over the decades, but then in the 1970s, the author Peter Benchley used that terror-filled incident to write the best-selling book “Jaws” which became the hit movie “Jaws” in 1976.

DOERING: We got a great soundtrack out of that from John Williams.

DYKSTRA: Got a great soundtrack, and the other thing that happened is it became fashionable to go out and kill sharks. Something even Peter Benchley, before his death about ten years ago, said he deeply regretted from his book.

DOERING: Well, thank you, Peter. Peter Dykstra’s an editor with Environmental Health News, that’s ehn.org and dailyclimate.org. Thanks so much!

DYKSTRA: Alright Jenni, thanks a lot. And talk to you soon.

DOERING: And there’s more on these stories at our website, loe.org.