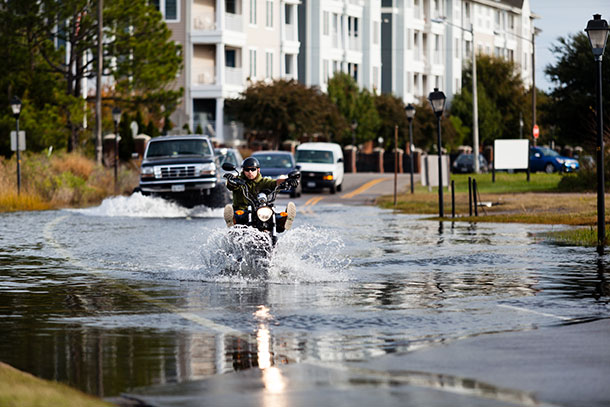 Motorists drive through a flooded street near the Lafayette River in Norfolk, Va. The city is one of many East Coast locales with an elevated risk of recurrent high tide flooding. (Photo: Chesapeake Bay Program, Flickr CC BY-NC 2.0)

The National Oceanic and Atmospheric Administration (NOAA) charted record high tide flooding along US coastlines in 2017, and they forecast more frequent tidal flooding in the years ahead. NOAA Scientist Gregory Dusek spoke with Host Steve Curwood.

CURWOOD: And I’m Steve Curwood.
Right now there are no big storms in the Atlantic, and so there is little risk that storm surges will splash into cities and towns along the US East Coast anytime soon. But the tides are another matter. The National Oceanic and Atmospheric Administration (NOAA) says that the number of high tides that flood into Atlantic Ocean communities is about double what they were just 30 years ago, and the agency predicts tidal flooding will keep increasing in the years ahead. Gregory Dusek is a NOAA scientist and one of the authors of the tidal flood report, and he joins us now. Welcome to Living on Earth, Greg!

DUSEK: Thanks, Steve. Good to be here.

DUSEK: That's a great question. So, I think a lot of people think of sea level rise as something that's not going to be impacting us for some time. Often it's referred to 2050 or 2100 as to when we'll start seeing impacts. But really, high tide flooding is the first evidence that people are seeing of sea level rise, and it's happening right now. And so, we're trying to capture the change that's been occurring in high tide flooding, both in the recent past and in the near future.

CURWOOD: So, what does your report say about high tide flooding then in the US? 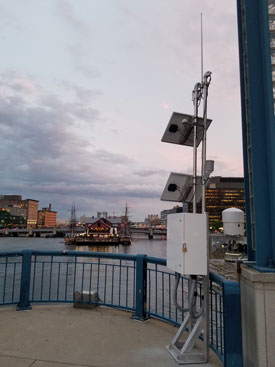 A tide gauge in Boston’s Seaport district. This one uses a microwave water level, cone-shaped sensor to measure the water's height. A tide gauge has been at this location in some form since 1921. (Photo: Courtesy of NOAA)

CURWOOD: And so we're not talking about a storm surge or anything. We're just simply talking about the tide that happens twice a day.

DUSEK: Yeah, that's right. So, in many cases, high tide flooding is like a few inches, maybe a foot of water on the streets. You might even see it on a nice day, a sunny day. Often we refer to it as nuisance flooding or sunny day flooding, and so it doesn't take a large storm to occur necessarily. You can have it on seemingly normal days, but what it does is it might influence your commute. It might fill up your storm drainage, affect your drinking water, and really kind of be a nuisance on a day-to-day case.

CURWOOD: Now, I notice that Boston, Massachusetts, where Living on Earth has its studios and offices, is cited as one of the cities that could see record floods. What other cities are most at risk?

DUSEK: Last year in particular, the Northeast was especially hard-hit and that's in part because of the strong Nor'easter season we had last year. So, high tide flooding will be impacted by storm events and by hurricanes as well. So, the Western Gulf in particular had a lot of events last year because of the rather busy hurricane season we had. And then moving forward to this year, we're also looking potentially at an influence from El Niño, which tends to impact the West Coast a little bit more and tends to see a little bit higher water levels. So, we might have some events there. And then in the mid-Atlantic, in particular, it just tends to be one of the greater number of days compared to some of the other locations.

CURWOOD: And then in the trivia department, what cities in the United States have the highest tides?

DUSEK: Boston's is pretty high. It's about 10 feet or so, and then if you go over to the northwest to Seattle and that range in the Pacific Northwest, in that area, you get up around four meters or so. So, about 12 to 15 feet from low to high tide.

CURWOOD: How did you get the data for this report?

DUSEK: So, our office is the Tides and Currents office at NOAA, and we run over 200 real-time tide gauges across the US. And in many cases they've been operating for 50 years or more, and we have several locations that have been operating since the 1800s. And so we're able to use that data to look at changes in sea level over time and changes in the tides and high tide flooding over time. So, really having this water level network and this consistent continuous high quality water level data is what makes this possible.

CURWOOD: So, which communities are most at risk from high tide flooding right now and among those communities, which ones didn't really have this problem 20, 30, 40 years ago?

A map of elevations at or below nationally consistent flood severity levels for high tide flooding. (Photo: Courtesy of NOAA)

DUSEK: So, some of our tide gauges have been in for a hundred years or more. You look at communities along the East Coast in particular. I think a good example is Charleston, South Carolina, where if you go back 30 years, you were having maybe one day a year of flooding. And in the case of Charleston, we’ve had a tide gauge there since 1921. And in 1928, we had the Lake Okeechobee hurricane, which is one of the deadliest hurricanes in US history. It was a Category 1 storm when it hit Charleston, and that was the highest recorded water level at our Charleston gauge from 1921 to 1934. So, we had one high tide flood in the first 14 years at Charleston, and it was caused by a catastrophic hurricane, and now we see it four times a year or more. And so, the water levels that used to take a once-in-a-decade storm now occur just from normal weather and multiple times a year.

CURWOOD: Greg, how much trouble are we in with this high tide flooding and sea level rise in the years ahead? We have a rising population here. A lot of folks live on the coastline. Well, looks like there's trouble ahead.

DUSEK: Yeah, I think major urban areas which are along the coast are going to be experiencing flooding on a very frequent basis, at least as the construction and flood defenses are set up right now. We're headed towards flooding of every other day, 180 days per year, especially by 2100. In 2100, even at the intermediate low scenarios, most places in the northeast Atlantic, southeast Atlantic, the gulf will be seeing flooding every other day. It's definitely going to be a reoccurring problem that people are going to have to deal with. And it's going to get more frequent and it's going to get worse in terms of its magnitude.

CURWOOD: So, talk to me about what you hope municipalities will do with your research as they draft plans to deal with future flooding.

DUSEK: So, one of the reasons we put this together really is to provide people with the most up-to-date information they can have about how much flooding they're seeing and what they can expect not just next year but even further into the future. And the idea is that hopefully they will take this and incorporate this in their planning moving forward, especially if we want to avoid cases where we're going have water in the streets almost on a weekly or even more basis – then, you know, this information is going to be vital to folks making those type of decisions.

CURWOOD: Gregory Dusek is Chief Scientist at NOAA's Center for Operational Oceanographic Products and Services. Greg, thanks so much for taking the time with us today.

DUSEK: Thanks, Steve. It was great talking to you.