‘Mayor Pete’ and the Climate 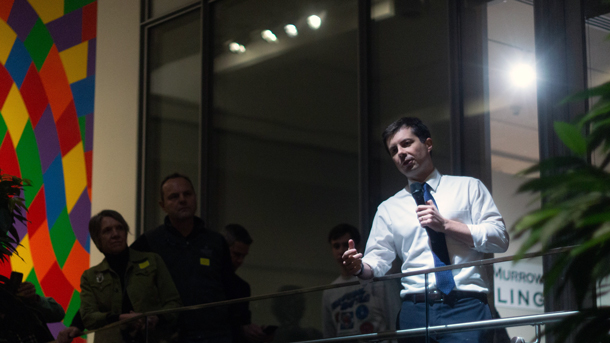 Pete Buttigieg, the 37-year-old Democratic mayor of South Bend, Indiana, is riding a wave of media attention as he campaigns to be the next United States President. He’s making the future of America a focal point of his campaign. On April 5th, “Mayor Pete” spoke at the Currier Museum of Art in Manchester, NH and highlighted climate change as a key concern for his generation. As Living on Earth’s Jenni Doering reports, that message resonates with those young and old voters who see Mayor Buttigieg as uniquely qualified to talk about the future of America.

The presidential primary season can have its surprises, and one for the Democrats this year is the 37-year-old mayor of South Bend, Indiana, Pete Buttigieg. His fans call him Mayor Pete and he was virtually unknown just a few weeks ago, but this Rhodes Scholar and veteran of Navy intelligence is riding high on a wave of media attention. Of course there is more to a presidential campaign than excitement, but it’s hard to win without it, and when Pete Buttigieg came for an appearance at the Currier Art Museum in Manchester, New Hampshire there was an overflow gathering outside. Living on Earth’s Jenni Doering has our story.

DOERING: There was a crowd of at least a hundred people who weren’t able to get in to the venue, so “Mayor Pete” stood on a bench outside, and revved up the crowd.

BUTTIGIEG: I’m really humbled you took the time to spend with me and really appreciate your motivation to help bring about something that will not only win an election, but help us begin to win an era.

DOERING: For the 300 or so who did make it inside the Currier Museum, the atmosphere was buoyant. 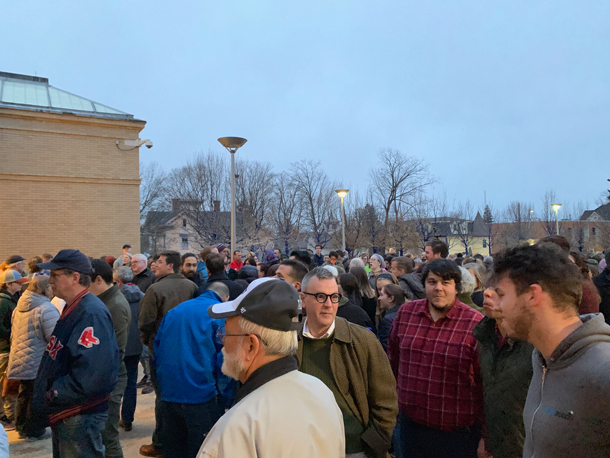 An overflow crowd of at least a hundred people stood outside the Currier Museum, April 5th and Pete Buttigieg came out to speak with them before heading back inside. (Photo: Jarred Barber)

DOERING: Mayor Buttigieg highlighted the importance of looking towards the future, especially when it comes to the effects of climate change.

BUTTIGIEG: Speaking to you as a mayor who found myself compelled to open the emergency operations center of my city twice in two, years for floods that we were told were 500-year to 1000-year floods, happening back to back – don’t tell me climate is not a security issue.

DOERING: Mayor Buttigieg didn’t mention the Green New Deal here in New Hampshire, but at a rally in Boston in early April, he said he supports the plan to decarbonize the U.S. economy and fund clean energy jobs. He compared the ambitious plan to the moon shot.

BUTTIGIEG: In the same way that President Kennedy hadn’t mastered all the rocket trajectories in 1960 when he wanted us to get to the moon by 1970, right, I still think we commit to it now, precisely because we’re not sure how to get there but we gotta kind of tie ourselves to that goal and then do everything we can as a country to get there, because I simply don’t believe we can afford to wait. [CHEERS]

DOERING: President Kennedy was our youngest president at 43 years old. Mayor Buttigieg is just 37 and says his age makes him uniquely qualified to take on the issue of climate change as president.

BUTTIGIEG: If this generation doesn’t step up, we’re in trouble. [APPLAUSE, CHEERS] This is, after all, the generation that’s gonna be on the business end of climate change for as long as we live. [APPLAUSE] 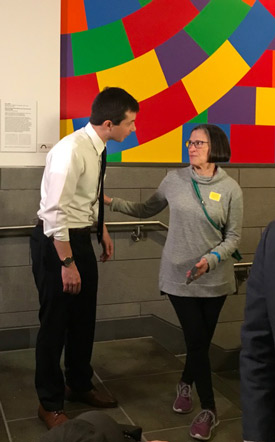 DOERING: In 2017 the South Bend, Indiana mayor joined the Mayors National Climate Action Agenda. That’s a group of hundreds of mayors who have pledged to work in their cities to reduce greenhouse gas emissions to meet the goals of the Paris Climate Agreement.

He’s made redevelopment and urban livability key priorities for his city. His “Smart Streets” program, which widened sidewalks and added new bike lanes and urban trees, has been credited with revitalizing South Bend’s downtown. Mayor Buttigieg says the greening of South Bend helped attract over $90 million in private investment.

And when President Trump’s Environmental Protection Agency scrubbed climate change data from its website in 2017, South Bend joined other cities in archiving the agency’s data on its own website.

Mayor Pete’s willingness to talk about the urgent need to act on climate seemed to resonate with folks of all ages at the Currier Museum in Manchester, people like Elise MacDonald.

MACDONALD: I would say it’s like a “top-two” issue for me – along with getting big money out of politics – which is definitely related. I’m a Gen X-er myself – so I’m not a boomer, I’m not a millennial, I’m right in the middle. But these issues have been on my mind since the first Earth Day in 1970.

DOERING: Elise was just one of the many people who lined up to meet “Mayor Pete” after his speech. College sophomore Sophia Zamboli waited excitedly with several friends.

ZAMBOLI: It’s very important to us. Actually, I’m one of the leaders of Tufts Democrats, so we are actually organizing right now an IOTF panel, which is Issues Of The Future, and this year’s panel is on Climate Change and the Green New Deal. We’re seeing the impacts daily, and it’s just something that affects our future.

SMITH: I think it’s really positive to have someone from my generation in a national campaign. You know, the experience that people like Mayor Pete and myself grew up with is different than anyone else who’s run for president in this country before. And, bringing climate change front and center is going to be a very positive thing. I think he has a more credible case for that than a lot of the other candidates, because again, our generation and our kids are the ones who are going to have to suffer from it.

DOERING: Pete Buttigieg is quick to highlight his personal stake in the issue of climate change. 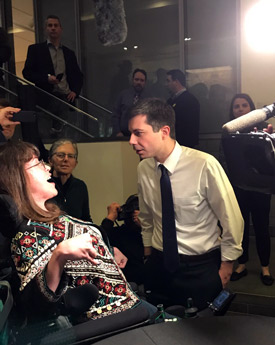 Media swarmed around Pete Buttigieg in Manchester NH April 5th as he spoke with a woman in a wheelchair. (Photo: Jenni Doering)

BUTTIGIEG: By definition, the longer you’re planning to be here, the more you have at stake in the decisions that are being made right now. It’s why I’m always talking about the need to think about the world as it will look in 2054, when I get to the current age of the current president.

DOERING: He likes to say his campaign for president is not just about the next four years – but the next forty.

BUTTIGIEG: And I see, in the audiences that I speak to across the country, the makings of a generational alliance. Not generational conflict – not what was experienced in the ‘60s, of young people versus their parents, but an alliance around the idea that we ought to have a better future and that everybody cares about that future, no matter your age.

DOERING: With an eye on the future and the next year and a half of campaigning for president, Pete Buttigieg is hoping that climate change and our shared need for a livable planet will be a uniting issue that helps carry him to the White House.