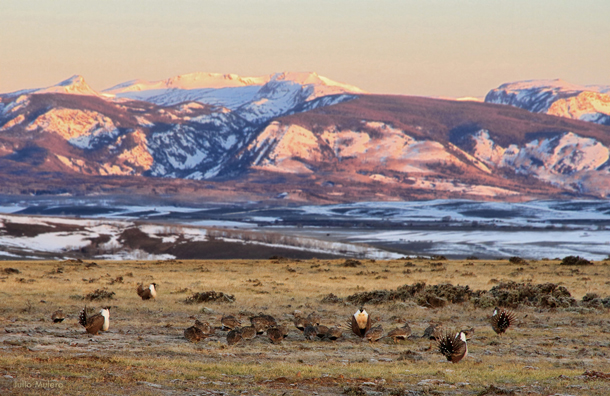 In 2015, private landowners, federal agencies and conservation groups worked out a plan to protect the Greater Sage Grouse by placing some restrictions on grazing and oil and gas drilling in ten Western states. But the Trump Administration recently lifted those restrictions, leaving the Sage Grouse and other sagebrush-dependent species more vulnerable. Collin O’Mara, the President and CEO of the National Wildlife Federation, joins host Steve Curwood to explain his concerns.

CURWOOD: What are we listening to here, Collin O'Mara?

O'MARA: So Steve, you just heard the amazing mating ritual of the Greater Sage Grouse. And so now just for all your listeners, imagine a about a two-foot bird that's you know, pretty flabby, pretty chunky, hopping around with these massive tail feathers that are big and spiky and kind of backing the entire bird as well as two huge yellow bulbous air sacs bulging out of their neck trying to attract the females in their lack to make sure that they are kind of the best mating partner that they possibly can be.

CURWOOD: So that's a hard way to pick up chicks, isn't it?

O'MARA: I'll tell you one thing I mean, with given some of the dance moves we've seen over previous generations, I'll put the Sage Grouse moves against any human any human move, in the last several decades.

CURWOOD: The Sage Grouse is considered by some naturalists as a indicator species. Why is that?

O'MARA: So if you look at the sagebrush steppe, habitat that kind of spans parts of 11 states across the West, there's about 350 different species that depend on this habitat type and they're species that range from things like mule deer, pronghorn, and there's a range of other species, as I said, 350 in total. And if the sage grouse is doing well, because the habitat is strong, and because they can kind of support their survival on their population growth, then that means the habitats of sufficient quality to support the other 350 species that depend on the same land.

CURWOOD: Now, go back in history a bit we used to have how many sage grouse in North America? And what do we have today?

O'MARA: Yeah, the numbers have dropped precipitously. Historically, the number has been well over a million birds, some estimates goes as high 16 million birds were on the landscape. And most recent estimates have it, you know, one to 200,000. Some have it a little higher than that. But that's the general again, so at least a 90, you know, 95% decline in the in the previous few decades.

CURWOOD: What was the setup under the Obama administration to protect the Sage Grouse?

O'MARA: Yeah, starting with the leadership of President Obama and Secretary Ken Salazar, who is running the department interior and the first Obama term, there is a huge collaborative effort put together with Republican and Democratic governors across the West to really try to identify those measures that would be most effective at recovering the Sage Grouse. And they included a range of activities. So for example, one was reducing mining activities for coal mining. And some of the most important habitat areas and another was making sure that oil and gas developments that were proposed in various areas were limited to those areas, that we're not directly going to impact the Sage Grouse. There's also a series of measures that were required that if you did have impacts in the habitat you had to mitigate what those are doing, kind of restoration projects elsewhere to try to make sure that the overall population health would benefit from additional kind of habitat availability. 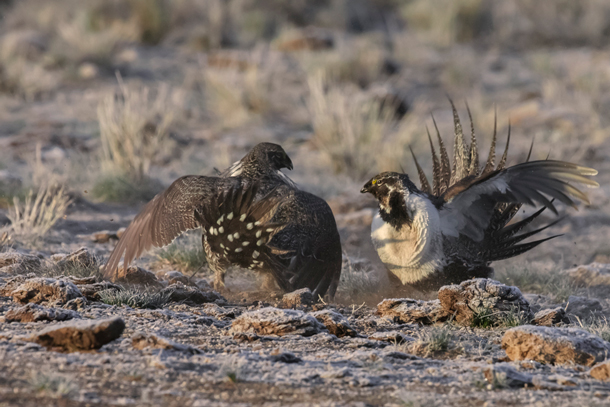 CURWOOD: The new administration has walked some of that back, they're going to allow more activities there. What would be the impact of having the oil drilling that the Trump administration has authorized in this area? Oil and gas drilling?

O'MARA: Yeah, so the Trump administration has, has proposed basically not differentiating between kind of drilling in areas that are important to the Sage Grouse and areas that are not as important to the Sage Grouse. And, you know, anytime you have kind of habitat disturbances on the landscape, they can affect, you know, this, this bird that's very sensitive to habitat changes that mean, the sage brush that they depend on for kind of habitat value, takes a long time to actually establish itself and to, and to grow. And so if you're running pipelines, if you're putting in well pads, if you're doing the things that kind of modern oil exploration can do, and you're doing it in areas that are directly kind of critical to the survival of the specie, obviously, you can, you can really alter their long-term chances. And these leks these and kind of important habitat areas over some of the areas that we were trying to say should be off limits. And all the governors agreed, I mean, Republicans and Democrats from across the West agree that these places should not be places where there's drilling activity yet the Trump administration removed the protections that would have prevented that from happening.

CURWOOD: So what's the scientific basis of the Trump administration's decisions to allow oil and gas drilling and cattle grazing?

O'MARA: I don't think there is a strong scientific underpinning, I think that there were some specific industry groups and others that wanted to see some changes for financial reasons, there was some science to basically show that you do have to kind of mitigate these impacts, given the kind of the population densities that we're trying to achieve. But I think they're extremely vulnerable on the scientific side, because this is more of a political process, where they're asking people kind of what changes they wanted to see, as opposed to talking to the leading scientists. Almost all of them said, “no”, we need to keep the plans in place. And if anything, we should be talking about strengthening the plans, not taking a step backwards. And you have world class biologists from across the West, united on this, that there really is no scientific basis that could allow this kind of activity and then also see the birds recover.

CURWOOD: How fair is it to say Collin that the Trump administration's approach to this is the heck with the environmental advocates in the species protectionists we need these fossil fuels, we need to feed our cows?

O'MARA: There was an executive order that President Trump signed in his first year that he kind of this this so-called Energy Dominance, executive order. And it basically said that we are going to remove every barrier we possibly can to any kind of oil and gas development. And what we're seeing is that there's just no, there's no balance, right? There's no attempt to try to protect, you know, important wildlife habitat. There's been a little bit of an effort around some of the migration corridors for some of the bigger game species in particular things like mule deer and pronghorn and elk. But for the most part, we're seeing that we see 95 million acres, for example, across the entire country opened up for oil and gas drilling auctioned off last few years, we've seen less than 30,000 acres proposed for kind of conservation protection. That's a massive difference. And, you know, at a time when oil prices are low, and you know, we if anything, we should be switching to alternative fuels and reducing our overall emissions given the kind of escalation of the climate crisis. You know, this is going in exactly the wrong direction, when what we really need in this country is balance. And that's what the department of interior is supposed to be doing. We're just not seeing much of it right now.

CURWOOD: So if the Trump administration began with a policy of full speed ahead for energy extraction from public lands, what would be the impact of the reelection of Donald Trump as president?

O'MARA: I think this is the one of the most important questions I mean, I think they're, you know, we can look at polling in the West, an overwhelming number of kind of folks that live in places like Colorado, Montana and Wyoming and Idaho and Utah believe that the energy dominant strategy has gone too far. They oppose the reductions of the national monuments at Bears Ears and Grand Staircase-Escalante. They think that the public input that's been reduced should go back up you know, folks should have more input into these decisions. But at the same time, and I think, you know, when energy prices are low, and unemployment, is low, folks traditionally have had high probabilities of getting reelected. And so I think we're trying to make the case that conservation is a, you know, it's an American value this isn't a Democratic or a Republican issue it affects everybody. And if we allow these species to go extinct if we lose access to these amazing public lands that really differentiate us from the rest of the world, that we're losing something that we simply can't get back. And that at a time when one third of all wildlife species in this country are at heightened risk of extinction in the coming decades, at a time when our outdoor economy is an $887 billion juggernaut that's employing people in every county across the country, that having this short sighted focus on energy extraction at all costs, is coming at the detriment of not only our wildlife and natural heritage, but it's coming at the detriment of one of the most explosively growing parts of our economy related outdoor recreation. And so if the question becomes who's going to do more for you know, American jobs now we hope that the voices of outdoor recreation and kind of our natural assets are given the full attention of the electorate and not just you know what the prices at the pump.

CURWOOD: Collin O’Mara is the president and CEO of the National Wildlife Federation.