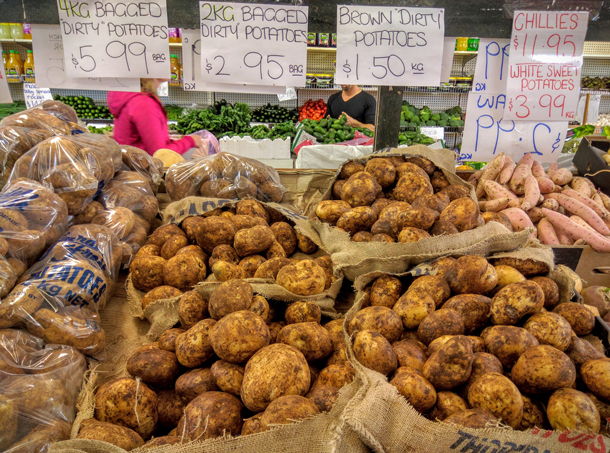 Researchers at Friedrich-Alexander-Universität Erlangen-Nürnberg have found a way to make potatoes produce tubers in abnormally-hot lab conditions. Their next project is to see if they can repeat their results in the field. (Photo: Øyvind Holmstad, Wikimedia Commons, CC BY-SA 4.0)

Potatoes are a staple food for populations around the world, including the developing countries Bolivia, Rwanda, and Kyrgyzstan. But when the temperature rises over 70 degrees Fahrenheit, potatoes produce vastly fewer, and less nutritious, tubers. New research has uncovered why hot potatoes are so unhappy, and even discovered a way to grow more nutritious potatoes in hotter weather. Living on Earth’s Joseph Winters explains in this week’s note on emerging science.

WINTERS: Global warming is like a double-whammy for agriculture. First, there’s the extra carbon dioxide. Although plants need to take in CO2 for photosynthesis, too much carbon dioxide can actually make plants less nutritious. They grow bigger, tougher leaves, but the vitamins, minerals, and proteins are diluted.

Then there’s the warming itself: not all plants thrive when you turn up the thermostat, even just a few degrees. One such example is the humble potato, whose growth declines when temperatures climb over 70 degrees Fahrenheit. This could be a big problem for a warming world. In many developing countries—places like Rwanda, Kyrgyzstan, and Bolivia—tubers like the potato underpin food security.

The problem with hot potato plants is that high temperatures somehow stop potatoes from forming underground tubers—a process called tuberization. In hot weather, potato plants sprout more green shoots and leaves, but barely produce any spuds. And the few tubers that do sprout have less starch, fewer nutrients, and are quick to rot.

This May, researchers at Friedrich-Alexander-Universitat Erlangen-Nurnberg, a German research university, finally found out why. They had already known about a protein called SELF-PRUNING 6A, which tells potato plants to make tubers when the temperature is cool enough. But what they discovered was that a small bit of genetic code—a specific RNA chain—could turn off SELF-PRUNING 6A when the weather got too warm. Under milder weather, the RNA chain simply lay dormant in the potato plant. 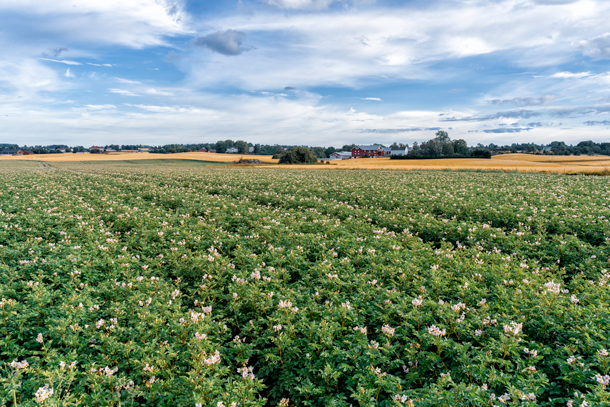 Potatoes produce bigger leaves, but fewer tubers, at temperatures above 70 degrees Fahrenheit. This could be a problem for a warming world, since the potato is a staple crop for many populations, especially in developing countries including Bolivia and Kyrgyzstan. (Photo: Maksym Kozlenko, Wikimedia Commons, CC BY-SA 4.0)

The researchers' experiment, which was led by the university’s biochemistry chair Dr. Uwe Sonnewald, went on to try growing potato plants in which they deactivated the tuber-blocking RNA. They placed potted potatoes in a super-hot greenhouse and, sure enough, the potatoes produced healthy tubers.

It remains to be seen whether deactivating the small RNA will still produce healthy spuds in the field; this is Dr. Sonnewald’s next research objective. It’s another issue entirely whether consumers will be willing to accept the genetically-modified hot potato, citing unknown side effects on health and ecology. For the time being, the researchers are hopeful that even in a warming world, there will still be an option for growing our favorite starchy vegetable. We may have to say goodbye to a cooler, pre-industrial climate, but we may not have to part with home fries and tater tots. At least, not just yet.

That’s it for this week’s note on emerging science, I’m Joseph Winters.