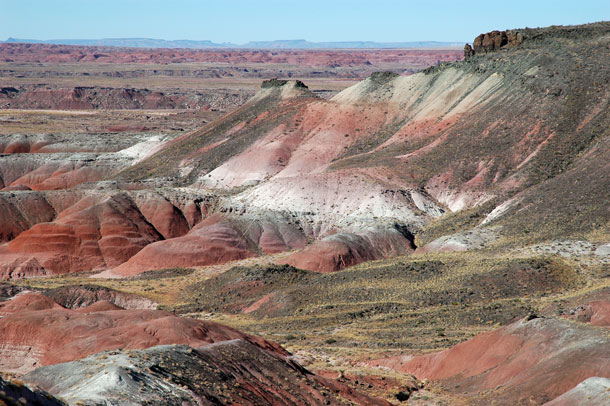 Living on Earth’s series on US public lands takes a trip to Petrified Forest National Park in Arizona where visitors can see the fossilized remains of trees more than six feet in diameter that lived there more than 200 million years ago. Sarah Herve, the acting chief of interpretation for the park, tells Host Bobby Bascomb about the unique geological process that preserved the ancient trees.

[MUSIC: Sharon Jones & the Dap-Kings, "This Land is Your Land" on Naturally, Daptone Recording Co]

BASCOMB: We continue our series on US public lands now with a trip to one of our more unusual National Parks. Arizona’s Petrified Forest National Park is full of wildlife, and the beautiful hiking trails that we’ve come to expect in our public lands. But what really sets it apart are the trees that died there more than 200 million years ago. The fossilized remains of those trees, logs more than 6 feet in diameter, are still there today, cast in stone. Here to explain more about the unique geological process that preserved the ancient trees is Sarah Herve, the acting chief of interpretation for the park.
Sarah, welcome to Living on Earth!

HERVE: Thank you. It's great to be with you.

BASCOMB: So what exactly is petrified wood? How was it formed?

HERVE: So petrified wood is a fossil. A lot of times people think that it's something different than you know, any other kind of fossil, which is basically the fossilized remains of some living organism. And in our case, the petrified wood is the remains of gigantic forests that were here during the Late Triassic. The logs that we now find, you know, on their sides on the ground, have been turned to stone by rapid burial. There's silica in the materials that the trees were buried in and the cellular structure has been replaced by silica. There's other minerals present, but the glassy mineral silica is really, really good at exchanging places with cellular material. And that's why you have maybe, you know, a big piece of petrified wood that still looks like wood, but then you go to pick it up, and it's really heavy because it's been turn to stone.

BASCOMB: So the end result then, is you have these logs lying around that look exactly like trees, you can see the rings in them, the bark, the whole thing, but it's stone.

HERVE: Yeah, exactly, yeah. And in some cases, we can't see any of the rings, the petrification process has been so complete, that all of the cellular structure of the rings, everything has just blown apart. But that wood is oftentimes what we call rainbow wood, because it's very, very colorful. And so on the outside, it may look just like, you know, regular wood, or kind of a reddish color wood. But then when you look on the inside, there's all kinds of pinks and purples and blue colors, blacks, and it's really just amazing. The amounts of petrified wood are also very staggering, and the size of the logs in some cases, you know. If you can picture these logs when they were trees, they would be comparable to like the giant sequoias of California.

BASCOMB: And these trees were living some 225 million years ago. What are scientists able to learn about the geology of the area and the trees themselves from studying this petrified wood?

HERVE: So by looking at the rocks and understanding the rocks and the geologic setting, paleontologists and geologists are able to understand that this part of northern Arizona was a much more tropical kind of environment. We were closer to the equator at that time, the continents were together to form Pangaea, there was quite a bit more water through this region. And that's, I mean that's based on looking at the different fossils that are found within these rocks and the rocks themselves. It's thought that there was a tremendous river system that was running through this area. And when I say large river, I'm talking about something on the same magnitude as like the Mississippi or the Amazon River. So a huge, you know, very, very wide river that goes for hundreds and hundreds of miles. 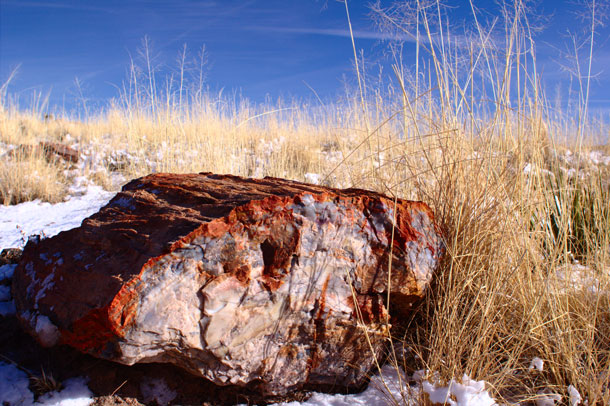 BASCOMB: And this is Arizona we're talking about, so things have changed a lot.

HERVE: [LAUGHS] Right, exactly! Yeah. So our current environment, when you look at it, it's really hard to imagine, you know, a place so full of trees and crocodile-like animals running around and lots of amphibians, right. Those are some of the different fossils that we find. And you know, when you look around today, we are in the middle of a big beautiful grassland. And then we have, you know, incredible badland topography. So that's what a lot of people, you know, call the Painted Desert. And it is very, very colorful, that's why it gets that name. But those deposits are the remains of those ancient rivers.

BASCOMB: And you alluded to this just now, but trees aren't the only things that you have preserved in the park, I understand you have a large trove of dinosaur fossils there.

HERVE: The dinosaurs that we find at Petrified Forest, they're generally pretty small. So we're at a time way before all the big dinosaurs happened. So you know, the Triassic was a time when a lot of animals were, you know, their lineages were getting started. And those lineages became many of the animals that we're familiar with today, especially in the reptile and amphibian world.

BASCOMB: I understand that you also have petroglyphs there, left over from early inhabitants of the area. Can you tell me about those?

HERVE: Yeah, so, we have a 13,000-year archaeological record here in the park, so that's continual occupation of some indigenous people. And we can see through the archaeological evidence that we find in the park, people coming and going in the area and technologies changing. The petroglyphs themselves are really interesting. There's a lot of petroglyphs or what we call rock art in the park. There's different, you know, sometimes animistic forms. So you'll see things that look like different kinds of birds or things that look really obviously like deer, you know, or elk or pronghorn antelope, which are animals that still live in the park today. And then some of the forms are very, very strange, and really hard to interpret. Some of the petroglyphs are also considered what we call solstice markers, or solar calendars. And so they have light interactions with the sun during different times of the year, usually associated with either the solstice or the equinox.

BASCOMB: So with all of these ancient records, the park must just be a treasure trove for archaeologists and paleontologists. What kind of research is going on there today? 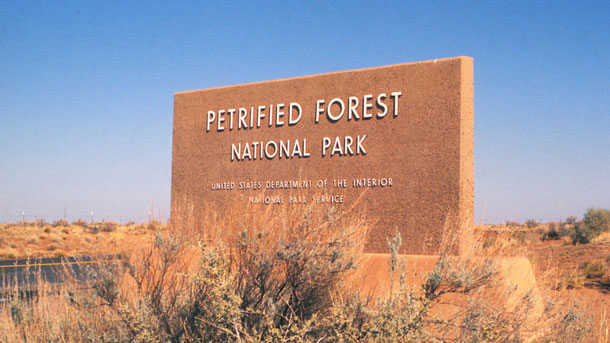 Petrified Forest National Park was made a national park in 1962, when it had previously been a national monument since 1906. (Photo: Barbara Ann Spengler, Flickr, CC BY-NC 2.0)

HERVE: It definitely is! [LAUGHS] You know, we have a variety of different kinds of researchers, you know, so even within the world of paleontology, you might have someone who's specifically focused on aetosaurs, which is a type of crocodile ancestor. Or you might have someone who studies fossil pollen. Paleobotanists, you know, so people that are coming and studying the plant material, not just the logs, but we find incredible, like fossil ferns and cycads and other, you know, kinds of plants that you usually associate with more tropical environments, than the grasslands of northern Arizona. And then the archaeology story is equally as exciting and have lots of interest from archaeologists in this place, simply because we have an incredible amount of archaeological material and we have that long time span of continuous occupation. And then also because of where we're located, and that there are still descendants of the people who called this place home, you know, for thousands of years.

BASCOMB: And I understand there's also some pretty spectacular hikes in the park. Can you tell me about some of the most popular trails there and the unusual landscape that visitors walk through on them?

HERVE: Sure, we do have a variety of hiking trails that are, you know, some are paved, some are just, you know, sort of a dirt surface. Most of those are fairly short walks, they can be either, you know, into some of the badland formations, for example, the Blue Mesa, which is a favorite area of mine, and a lot of visitors enjoy going there. It takes you into a canyon, where you're walking amongst layers of purple and green and red. And then you know, we have a walk that goes around an ancestral Puebloan village called Puerco Pueblo, and you can see petroglyphs from the trail there. You know, we also tell stories associated with Route 66 because we have a section of Route 66 preserved within the park. So you know, you can do a variety of different trails and see a variety of different things in the park that encompass all of our different themes.

BASCOMB: And, you know, we have a lot of national parks in our country; we're very lucky that way. Why should somebody visit this park as opposed to any other? 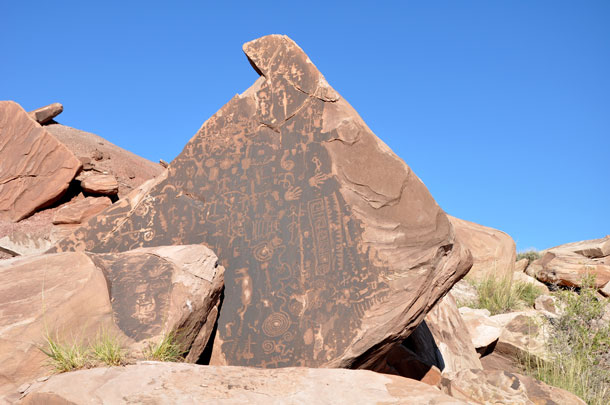 Archaeological sites, such as petroglyphs carved into rock surfaces, suggest that people lived in the park as long as 8,000 years ago. (Photo: Finetooth, Wikimedia Commons, CC BY-SA 3.0)

HERVE: You know, what I hear from a lot of park visitors is, you know, “wow, we're so glad we came here, we like this better than Grand Canyon!” And that's not a dig on Grand Canyon. But it's always interesting to me to hear that because I think a lot of times people don't realize right when they get off the interstate what they're in for, and then they get in the park and they're driving through and they see the different scenes of the Painted Desert and go into the museum and learn more about the park, and they just realize that this place has so much to it, that you know it can be kind of underestimated at first glance.

BASCOMB: Sarah Herve is the Acting Chief of interpretation for Petrified Forest National Park. Sarah, thank you for sharing the park with us today.

HERVE: Thanks so much for having me on the show. And I hope to see some of your listeners visit us in the Petrified Forest National Park.