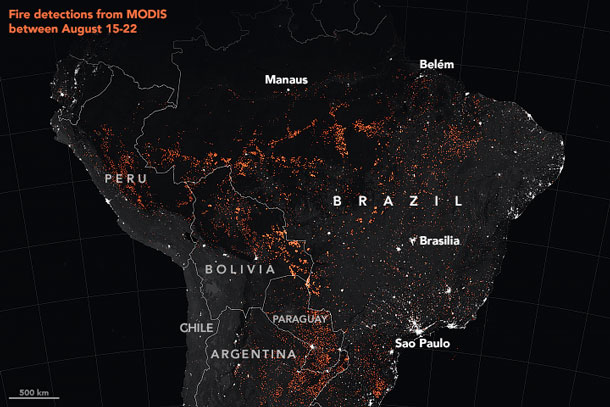 The fires in the Amazon rainforest are illuminating the alarming speed of deforestation in one of the most biodiverse places on Earth. Deforestation in the Brazilian part of the Amazon is on the rise again as Brazil’s President, Jair Bolsonaro, allows farmers and corporations bent on turning old growth forest into soy fields and cattle ranches. Now a “tipping point” could be near, putting the rainforest at risk of gradually turning into dry savannah. Living on Earth’s Bobby Bascomb spoke with Carlos Nobre, senior researcher at the University of Sao Paulo, about what the continued loss of the Amazon rainforest could mean for nature and the global climate.

CURWOOD: From the Jennifer and Ted Stanley Studios at the University of Massachusetts Boston, this is Living on Earth, I’m Steve Curwood.

As the Earth continues to warm, there are more and more signs of how our climate is becoming unbalanced. More deadly and erratic hurricanes are one sign, crushing heatwaves another and wildfires are incinerating nature and communities around the world, from Alaska to Central Africa, South East Asia and especially this year, the Amazon.

Tropical zone farmers around the world often burn parts of the rainforest to clear the land and boost soil fertility. But it’s a temporary fix, as the soil is quickly exhausted, so to keep farming they have to keep burning deeper and deeper into the forest. Often called the lungs of the earth, what happens in the Amazon does not stay in the Amazon and Brazil had reduced deforestation rates over the last decade. But the new national government relaxed enforcement of conservation laws and there were three times as many wildfires this July as compared to the same time last year.

NOBRE: It's very rare natural fires in the Amazon. So we know when there are fires. It's mostly for expanding their agricultural frontier into the forest.

BASCOMB: And the new president of Brazil, Jair Bolsonaro, has been nicknamed Captain Chainsaw for his attitude towards the Amazon. Can you tell me please more about his policies and rhetoric and how that's contributing in your opinion to this surge and fires there?

NOBRE: He called himself Captain Chainsaw. Just to illustrate his views on the way we should proceed with development in the Amazon. He does not believe the indigenous territory should be kept the way they are the he believes they should be transformed into big cattle ranches as well or open them up to mining. His views represent just a minority of people, which really do not have much power, except they are very close allied with the conservative agribusiness the conservative agribusiness sector wants perpetually expands the land for cattle ranches for agricultural. However, this is not necessary. And the Amazon and other parts of Brazil can produce a lot of food without further deforestation. It's simply a matter of increasing efficiency in Brazilian agriculture. And recent polls show that 90% of Brazilians are against Amazon deforestation, his views are the views of a very few people. And they are not really the views of Brazilians and Brazilians really care about the Amazon, not today but forever. 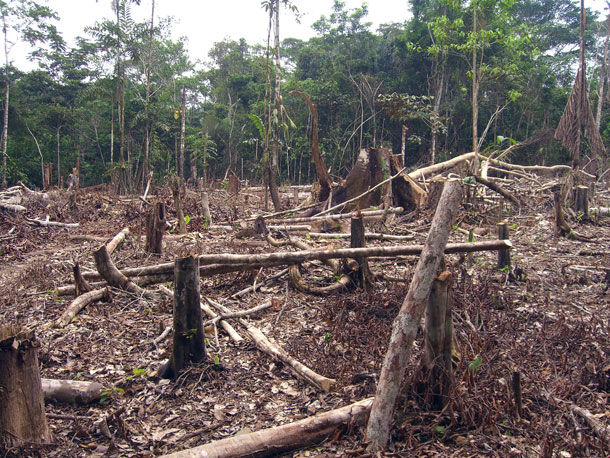 The Amazon is the world’s largest rainforest and acts as a major carbon sink. Its destruction could prevent meeting the Paris Climate Agreement goals of limiting global warming below 1.5 degrees Celsius. (Photo: Matt Zimmerman, Flickr, CC By 2.0)

BASCOMB: Well, let's talk a bit about why the Amazon is so very important even outside of Brazil, starting with its role as a carbon sink. What role does the Amazon play in the world carbon budget and how has that changed as a result of these fires.

NOBRE: So the Amazon as a natural sink, the forest removes something up to 2 billion tons of carbon dioxide from the atmosphere every year. This is about 5% of total emissions by human activity 70% combustion of fossil fuels and 24% deforestation and agriculture. So the Amazon alone removes 5% of that 40 billion tons. This is crucially important because otherwise, the planet would be warming up much, much faster than we are observing. If we lose most of this carbon stored in the vegetation, we are not going to meet the targets of the Paris accord of two degrees Celsius maximum warming or preferably 1.5 degrees Celsius.

BASCOMB: Well, let's talk a bit about water. The billions of trees in the Amazon produce an awful lot of water in the course of their lives. Can you tell me a bit about the role of the forest and the hydrology of the region and, and worldwide?

NOBRE: Tropical forests they have this very special characteristics, which is they produce photosynthesis all year round, because all this rain goes deep into the soil, they have very deep roots 10 meters up to 12 meters. So you don't see any seasonal variability photosynthesis in the production of organic material. And of course, the temperatures are very adequate for almost maximum optimal level of photosynthesis. Therefore, they keep transpiring water evaporating and transpiring we call evapotranspiration. And so that water is very important to induce the formation of clouds, clouds, droplets and rain. So tropical forests are the most efficient biome to recycle water. Many studies indicate that the without the forest, the overall rainfall in the Amazon would be something like 25% less. And if the rainfall is less, most of the forest, we will become a dry Savannah.

BASCOMB: And of course, the irony here is that this forest is being cut down for agriculture and the very crops and cows that require water will be harder to grow in the long term as rain fall pattern shift and the forest is degraded even further.

NOBRE: Absolutely, this is very true. You know, without the Amazon, we have many impacts on the possibility of agricultural one is yes, reduction of rainfall in distant remote areas. But also there is a direct effect of temperature, a tropical forest cools the atmosphere, because most of the solar energy reaching the forest is used to evaporate transpire water. And if you reduce the forest, more of the solar energy is used to heat up the air. So the air is warmer by two to three degrees centigrade. So the air is not only hotter over the forest, or what used to be a forest, but also when they travel southward, and they reach central Brazil, an area of agriculture, they will also reach that area to two degrees 1.5, 2 degrees warmer. And that's very damaging to agriculture. Because remember, this is tropics, this is already very, very hot places. Agriculture is, let's say almost at the limit in these areas in terms of temperature, so that will reduce productivity of agricultural and also cattle in in central Brazil.

BASCOMB: Now we hear a lot about the notion of the Amazon reaching a tipping point. That is where the whole system turns from rain forest to Savannah, how would that happen? And how far are we from such a tipping point? 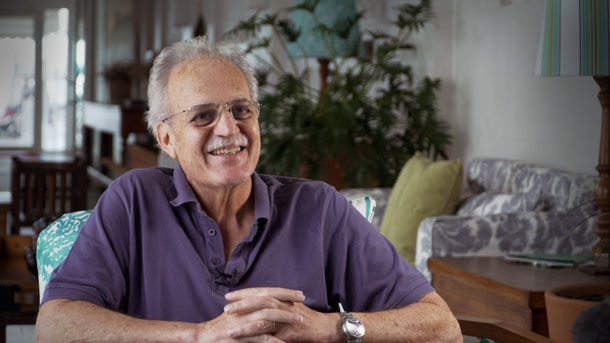 Carlos Nobre studies the biosphere-atmosphere interactions and climate impacts leading to Amazon deforestation. He is the former Director of CEMADEN, Brazil’s national natural disaster monitoring and alert agency and is currently a Senior Researcher at the University of Sao Paulo. (Photo: Courtesy of Carlos Nobre)

NOBRE: This is one area that I've been working with colleagues and my PhD students for many, many decades. And recently we look at all human drivers deforestation, climate change due to global warming, and also vulnerability of forest to increased number of forest fires, we put all those three drivers together. And then we concluded that because all these three drivers are acting upon the forest simultaneously today we should not exceed the forest figure 20 25% of the forest. If we exceeded this range 60% of the forest will slowly over three to five decades turn into dry savannas. This is the tipping point. And we are currently something like 15 17% deforestation the whole basin. So we are not that far under the current rates of deforestation. This is something between 20 and 30 years into the future, very, very close to the present.

NOBRE: Well, first, we have to be very concerned with the survival of 10s of thousands of species endemic to the Amazon, which will go extinct. So loss of biodiversity will be very significant by the Amazon forest is the most species diverse place on Earth, then probably we are going to lose over the course of a few decades, perhaps three decades, a very large amount of carbon, the dry savannahs store much, much less carbon maximum third, as much carbon as a tropical forest. So all that carbon ends up in the atmosphere as carbon dioxide making the possibility of reaching the Paris accord targets for 1.5 or two degrees, much harder, much, much harder. In fact, almost it makes impossible to reach it 1.5 target. So and also, of course, it changes the climate in the whole basin less rain, much hotter. And also, it will interfere remotely in, in climate in rainfall in many distant areas, perhaps even Southwest us but certainly Eastern South America.

BASCOMB: Well, this is all very depressing. What can a listener do somebody that's listening to us talking right now and feeling rather helpless about it? What can we do?

NOBRE: Well, we have really to to force the sector sectors exploring economics in the Amazon. So, it's very possible to have production of many, many products in the Amazon with zero deforestation policy. So, this is a possibility within our hands. But responsible consumption is a key element. And of course, when you go when you step higher, and you think about, let's say investment funds. Investment funds they own partly this big sigh companies meet companies, if these investment funds really have a policy of zero deforestation, their portfolios that would rapidly rapidly drive deforestation to nearly zero. I think, you know, consumers, they have the solution in their hands, it's more effective coming from that front, rather than, let's say, expecting the producers, agribusiness to be responsible or go along those lines on their own, they have to be forced to do it by the market. And also, we are going through a process in Brazil and many Amazonian countries that one should be careful expecting governments to take all these actions, they are probably not going to take those actions on the short run.

BASCOMB: Carlos Nobre is a senior researcher at the University of South Paulo. Carlos, thank you so much for taking this time with me.

NOBRE: Thank you very much for the opportunity.

National Geographic | “What the Amazon Fires Mean for Wild Animals”

The Chicago Tribune | “Is the Amazon Really ‘The Lungs’ of Planet Earth? No, It’s More Like Our Sink”