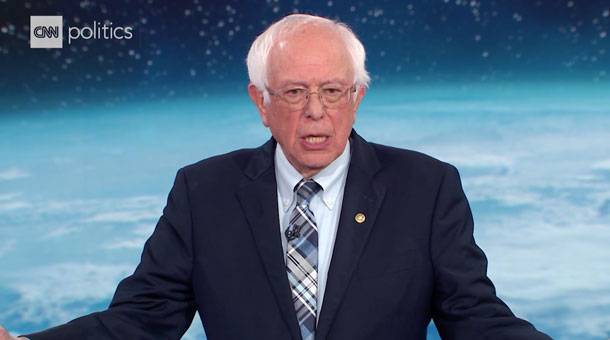 Vermont Senator Bernie Sanders called for about $1 trillion a year to be spent by the US government for the next 15 years on battling the climate crisis. (Photo: CNN)

On the evening of September 4th, CNN hosted a town hall event with seven hours of discussion surrounding the climate crisis. In back-to-back sessions, ten Democratic presidential hopefuls fielded questions from moderators and audience members alike on how they plan to address rising seas, environmental racism, and the fast-approaching deadline to curb global carbon emissions. We recount highlights from five of these ten candidates in the first part of our recap of the town hall.

On September 4th, CNN hosted ten of the highest polling Democratic candidates for president in back-to-back town halls about the climate crisis. The historic, nearly seven hours of discussion gave candidates a chance to lay out in some detail their plans for curbing greenhouse gas emissions, and helping communities adapt to unavoidable impacts. No candidate doubted the urgency of the climate crisis, and many noted the United Nations says we have just 11 years left to cut greenhouse gas emissions in half to keep global average temperatures from rising more than 1.5 degrees Celsius.

The questions were how and for how much. Vermont Senator Bernie Sanders called for $16 trillion to be spent over the next 15 years, roughly a trillion dollars a year, or 5 percent of GDP.

SANDERS: People say, "Well, Bernie, you know you're spending a lot of money. Is it realistic?" And my response to them is, is it realistic to not listen to the scientists, and to create a situation where the planet that our children and grandchildren and future generations will be living in will be increasingly uninhabitable and unhealthy? Is that realistic? So, I think we have a moral responsibility to act, and act boldly. And to do that, yes, it’s going to be expensive.

CURWOOD: CNN moderator Anderson Cooper asked Senator Sanders how he could accomplish his goals of Medicare for All, tuition-free college, and his climate plan all at the same time.

SANDERS: Well, I have the radical idea that a sane Congress can walk and chew bubble gum at the same time. [LAUGHTER] And you know, Anderson, there are so many crises that are out there today. It is not prioritizing this over that. It is finally having a government which represents working families and the middle class, rather than wealthy campaign contributors. [APPLAUSE] And when you do that… [CHEERS] and when you do that, then things fall in place.

CURWOOD: Questions from CNN journalists and members of the audience put candidates on the record on a range of topics from fracking, to carbon pricing, to nuclear energy.

Senator Sanders called nuclear power too expensive and problematic with waste. Massachusetts Senator Elizabeth Warren said she’d start to phase it out. But entrepreneur Andrew Yang pointed to the promise of safer thorium-fueled reactors, and New Jersey Senator Cory Booker said nuclear must be part of the transition to a carbon-free economy. 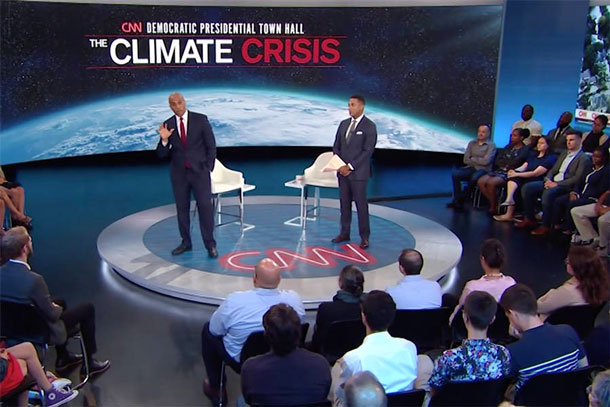 Senator Cory Booker (D-NJ) says the US needs to be at zero carbon electricity by 2030, and points to nuclear energy as a crucial part of that plan. (Photo: CNN)

BOOKER: My plan says that we need to be at zero carbon electricity by 2030. That’s 10 years from the time that I will win the Presidency of the United States of America. [LAUGHTER] And right now, nuclear is more than 50% of our non-carbon-causing energy. So, people who think that we can get there without nuclear being part of the blend, just aren’t looking at the facts.

CURWOOD: All the Democrats on stage pledged to bring back environmental protections that President Trump has gutted. Minnesota Senator Amy Klobuchar.

KLOBUCHAR: Right now, we have a leader that doesn't even think at all in the long term.  And there is an old Ojibwe saying that is important to me -- we have a lot of tribes in our state -- and it says “great leaders should make decisions not for this generation but for seven generations from now.” [APPLAUSE] We have, we-- we have a president that can't make decisions seven minutes from now, OK? 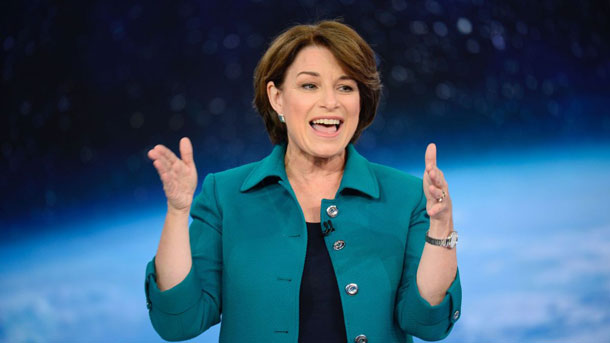 BIDEN: The deal is now, what's happened is that, as we have pulled out, there is no leadership. There is no leadership. I know almost every one of these world leaders. If I were -- if I had been president today, I would have at the G7 made sure this became the topic. There would be no empty chair. I would be pulling the G7 together. I would be down with the president of Brazil saying, “enough is enough. This is what we're going to do, and this is what's going to happen if you don't do it.” This is -- to bring the world together.

CURWOOD: Mr. Biden was asked about how realistic he thinks the Green New Deal is.

BIDEN: I think the Green New Deal deserves an enormous amount of credit for bringing this to a head in a way that it hasn't been before.  It hasn't been. But it doesn't have a lot of specifics about exactly what we'll do with regard to greenhouse gases. And it doesn't have specifics of what programs are you going to initiate to be able to deal with taking -- getting a net zero emission. What programs are you going to move on? What are the things we should be doing?  Where should the focus be? 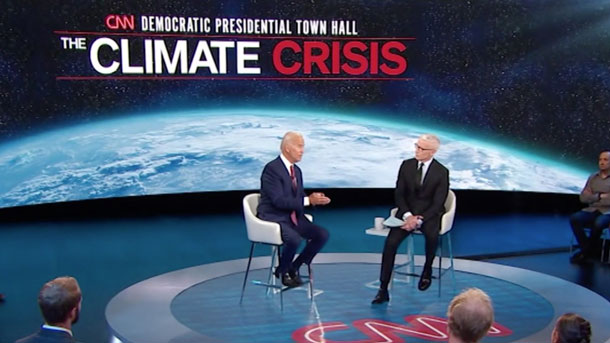 Former Vice President Joe Biden called for the United States to return to its position as a leader in the global battle against the climate emergency. (Photo: CNN)

CURWOOD: Several of the candidates stressed the importance of structural changes, such as getting corporate money out of politics and putting a price on carbon, rather than individual actions.

CUOMO: Do you think that the government should be in the business of telling you what kind of lightbulb you can have?

WARREN: Oh, come on, give me a break. [AUDIENCE LAUGHTER] You know...

CUOMO: Is that a yes?

WARREN: No. Here's the -- look, there are a lot of ways that we try to change our energy consumption, and our pollution, and God bless all of those ways. Some of it is with lightbulbs, some of it is on straws, some of it, dang, is on cheeseburgers, right? There are a lot of different pieces to this. And I get that people are trying to find the part that they can work on and what can they do. And I'm in favor of that. And I'm going to help and I'm going to support. -- But understand, this is exactly what the fossil fuel industry hopes we're all talking about. [APPLAUSE] That's what they want us to talk about. 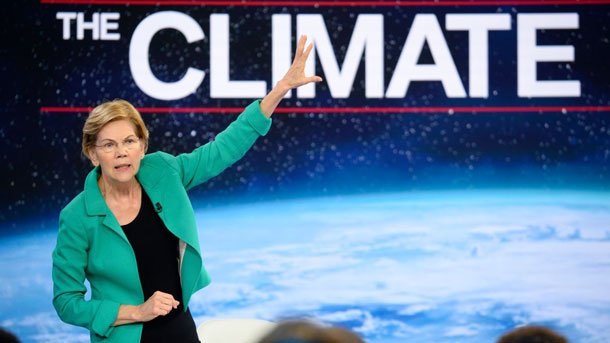 CURWOOD: And like some of the others present, Senator Warren spoke at length about the importance of environmental justice.

WARREN: So, I see it this way. Part one is that everything we spend on climate has to be about reducing our carbon footprint. It has to be about justice, as well, though, for people who have been displaced, for workers who have been displaced, for people in communities of color. It's about trying to help those who've been injured from all that's happened.