Science in Danger at the US-Mexican Border 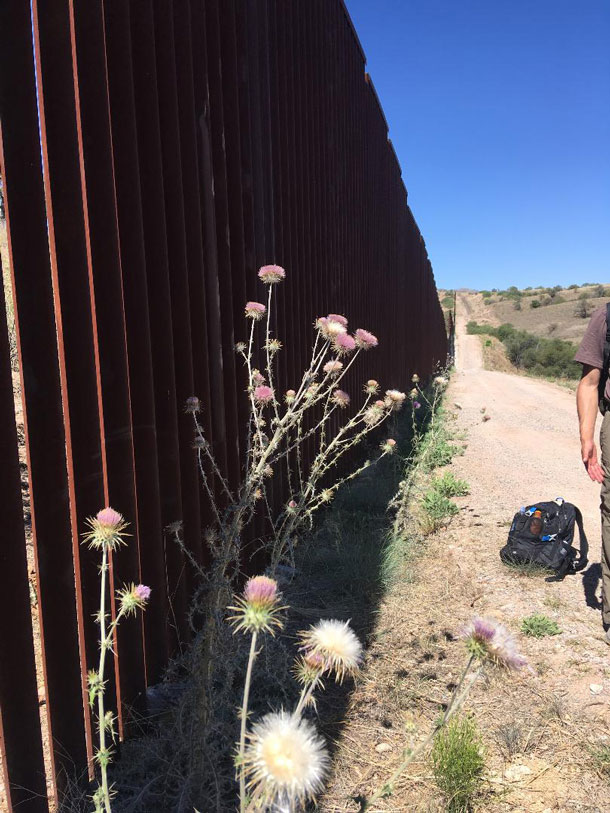 The border between the United States and Mexico is among the most heavily guarded in the world, causing complications for the nature that exists there, as well as the scientists that study that nature. (Photo: Courtesy of Sergio Avila)

Scientists working on the US-Mexico border face unique challenges when trying to study borderlands ecosystems, thanks to everything from outright harassment at the hands of Border Patrol officers, to tight restrictions on what natural materials can cross the border. They say it’s gotten much worse in recent years since the Trump Administration began advocating for a massive border wall as well as taking a hard line on illegal immigration and asylum seekers. Living on Earth's Bobby Bascomb is producing a series of dispatches from the US-Mexico border and discusses the challenges of doing science on the border with Host Steve Curwood.

BASCOMB: The border wall between the United States and Mexico is already impeding migratory animals, and if the wall is expanded, endangered animals like jaguar will have an even harder time finding a mate or territory. And the scientists who study borderland ecosystems are also having a hard time doing their work. Shortly after I returned from the border last summer, I sat down with Steve Curwood to tell him that nearly every scientist I spoke to had some story about how the wall and the crackdown on immigration is affecting their ability to do their work.

BASCOMB: Well, there are a couple different ways. The first and most obvious is just your classic harassment and intimidation.

BASCOMB: Yeah, one of the most egregious stories I heard was from Sergio Avila, a wildlife biologist with Sierra Club. Sergio is originally from Mexico but he’s been a US citizen since 2016. He told me about a particularly unnerving experience he had a few years ago in the mountains near the border. He said he heard a truck coming down the mountain, out of sight and around a bend in the road. He assumed it was Border Patrol, so he just waited for it to arrive.

AVILA: And so, when they saw me, they accelerated really fast and got to me next to me really quick and they stopped to a screech really make a big cloud of dust and say: What are you doing here? Well, I'm a biologist, and I'm studying wildlife. So I had to show my ID, which is my driver's license, I had to show my passport, I had to show that my passport had a visa, I had to show papers that I had from the organization I was working with, to see that it matches my name with my project with the organization. Because for these guys, it's very hard to believe that there is somebody studying jaguars out there, right? Like that's the first step for them to say this is not true. Or they always say oh, they taste good, those are the ones that you make carne asada with, you know, like, they have to make comments like those. And then one of them still inside of the car just pulls this huge semi-automatic weapon in front of him, out the car window and just says that, aren't you scared of people with guns like this, but he's pointing at me showing me, right? And so my first thought was like, but you're doing it? But yes, I am. I'm in front of you. And I'm scared right now. Right? Like, what makes you think that I'm not scared now? The interactions came to a point really, when law enforcement started increasing that I just had to stop a lot of my fieldwork, it was safer for me to just not do it. 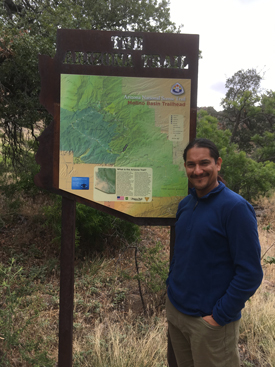 Sergio Avila is a wildlife biologist, as well as an outdoor activities coordinator with Sierra Club. (Photo: Bobby Bascomb)

BASCOMB: And Steve, Sergio has also had run-ins with the Minute Men, those are non-government volunteers who patrol the border with guns looking for people crossing illegally. And because they are not working in any official capacity the Minute Men are in some ways even scarier for people like Sergio because there’s no accountability.

CURWOOD: Yeah, it kind of sounds like they are vigilantes. So, I gather altogether he just didn’t feel safe anymore doing field work.

BASCOMB: Right, exactly, and Sergio is a trained field biologist with decades of experience working on endangered species in the area. Who knows what he might have found in his work that we no longer have access to? Then you extrapolate that out to the many scientists doing work in this area and it’s really a tremendous loss to science.

BASCOMB: And Sergio feels that he is especially targeted for harassment because he is Mexican-American.

AVILA: Because I have dark skin color, and black hair and an accent, I get helicopters flying over me. But if I was white none of those things would happen to me, so it's basically because of racial profiling.

BASCOMB: And Steve, that sentiment was backed up by another researcher that I met up with, Randy Serraglio of the Center for Biological Diversity.

SERRAGLIO: I'm a white man. So I benefit from white male privilege every day. And no, I have not been harassed by Border Patrol as much as you would think. Because really, they operate on racial profiling. So a lot of times I come up to the checkpoints, and I just get waved through. I'll just look like some white guy that lives in Arizona. I feel frightened sometimes on these dirt roads out here in the middle of nowhere, because every now and then you'll come across a Border Patrol vehicle driving like a maniac, you know, at high speeds. And it's very dangerous. The number one cause of death for Border Patrol agents is single person car accidents. You know, it's a it's one guy driving his vehicle too fast, and he rolls it and dies. So I certainly don't want one of them to run into me and it's come close couple times. 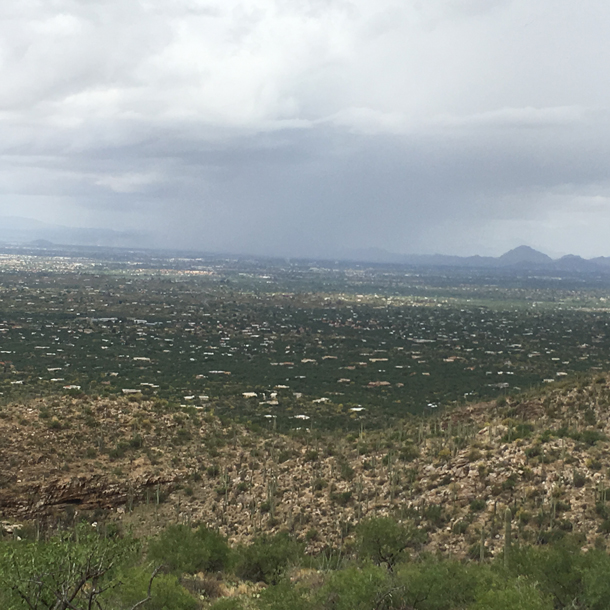 Ecosystems like the Sonoran desert are not confined to national borders, leading to complications when scientists need access to both sides of a border. (Photo: Bobby Bascomb)

BASCOMB: Randy told me he doesn’t really feel threatened by Border Patrol directly, but he does feel afraid of ordinary citizens who don’t like his line of work.

CURWOOD: That’s right, the Center for Biological Diversity is pretty vocal in is opposition to the wall, right?

BASCOMB: Yes, they are, and they also want to do things like limit cattle grazing on public lands where endangered animals live, that sort of thing. Here’s Randy.

SERRAGLIO: I've done all kinds of fieldwork, right along the border on both sides, northern Mexico, southern Arizona, you know, out in those places that our government wants you to fear and wants you to think are overrun with violent criminals and everything. And I have never felt threatened in those places. However, I do feel threatened in my office in downtown Tucson, because my organization has received death threats, you know, many times in the past because of the work that we do. And I fear that one of these days, somebody's going to walk into our office and shoot the place up. Seems to be the newest, you know, pastime in the US.

CURWOOD: So, intimidation can take a lot of forms for people working in the border areas. You mentioned earlier that there’s also another way scientists are being hampered in their work.

BASCOMB: Yeah there is! Just physically crossing the border has become difficult in the last few years. I spoke with the executive director of the Sky Island Alliance, Louise Misztal.

MISZTAL: There's longer wait times at border crossings. Mexican staff that work with Sky Island Alliance have had challenges and been, you know, harassed and delayed coming across the border. It's been very challenging and I think for some of my staff, it's kind of frightening.

BASCOMB: And I actually had a similar experience myself crossing the border. I was with a group of journalists and scientists and we were detained for an hour and a half and searched.

CURWOOD: Um, that doesn’t sound like much fun, what happened?

BASCOMB: It wasn’t. When asked if we had anything to declare, Gary Paul Nabhan, an agricultural professor and researcher, said yes, I have a couple of small plants I’m using for my research. Gary identified himself as a researcher and we were traveling in a truck that said University of Arizona on the side of it. Well, that led to us being pulled aside for further inspections.

I actually recorded the first part of our detainment. First you’ll hear the border agent and then Gary.

AGENT: It's very important that you tell me everything related to agriculture. Because if I do find something it’s up to a $1,000 fine. You have any fruits or vegetables?

AGENT: Do you have any plants?

BASCOMB: After some more back and forth about other items we might have in the truck we were told to get out and wait.

AGENT: If everybody can just get down, we're gonna do a quick exam of the vehicle.

[CAR BEEPS, SOUNDS OF GETTING OUT OF THE CAR]

BASCOMB: That quick exam of the vehicle involved going through our truck with a fine-toothed comb, I mean they took apart our suit cases, checked everyone’s pants pockets, went through our toiletry bags… everything. And, in the end, they found a walking stick, some lemons I picked in Tucson and forgot about, and a handful of seeds in Gary’s pocket that he also didn’t realize were there, and we were charged $300 for a fine.

CURWOOD: Oh man, what an ordeal.

BASCOMB: Yeah, and it’s becoming a common ordeal that botanists like Gary have to deal with every time they need to bring samples across the border for their work. You know, there’s actually a list of prohibited items that you can’t bring into the US and Gary asked for it while we were waiting but the border agents said they couldn’t give us the list because it’s constantly changing. So, if your work involves bringing samples back and forth what are you supposed to do?

CURWOOD: In other words, catch 22.

BASCOMB: Yup exactly, then add in the harassment and it’s getting really hard to be a scientist on the US-Mexico border.

Listen to Bobby’s story about the Coronado National Forest here