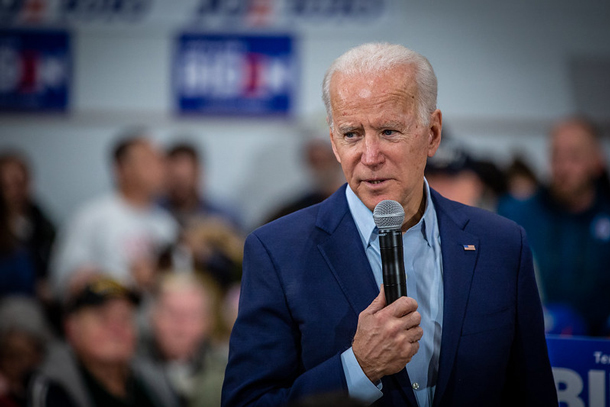 Former Vice President Joe Biden is running for President on a platform of bringing a divided nation together, on key issues including the environment. Living on Earth’s Jenni Doering reports on Joe Biden’s version of a Green New Deal for clean energy jobs and more, and hears from voters on why they support his plan for addressing climate change.

CURWOOD: From PRX and the Jennifer and Ted Stanley Studios at the University of Massachusetts Boston… this is Living on Earth, I’m Steve Curwood.

The Democratic presidential primary race has narrowed to Vermont Senator Bernie Sanders and former Vice President Joe Biden. We covered the Sanders climate platform in an earlier broadcast, and today we’re taking a closer look at Joe Biden’s. Back in the 1980s as a Senator from Delaware, he introduced some of the earliest climate legislation and became known for his daily Amtrak commutes between DC and home. When Joe Biden served in the Obama Administration as Vice President, he was part of the team that got the 2015 Paris Climate Accord over the finish line. But in 2009 the Obama-Biden White House had missed a key opportunity to put a price on carbon and make a success of the climate change summit in Copenhagen. And a number of regulatory moves it made late in its second term have been rolled back by the Trump Administration. Still, Democrats concerned about the environment give Joe Biden credit for his record on the climate.

In Massachusetts, where the former Vice President barely campaigned, I found a surprising amount of support for him just before election day. Thirty or so campaigners had gathered on a cold and windy overpass of the Mass Pike on the eve of Super Tuesday. 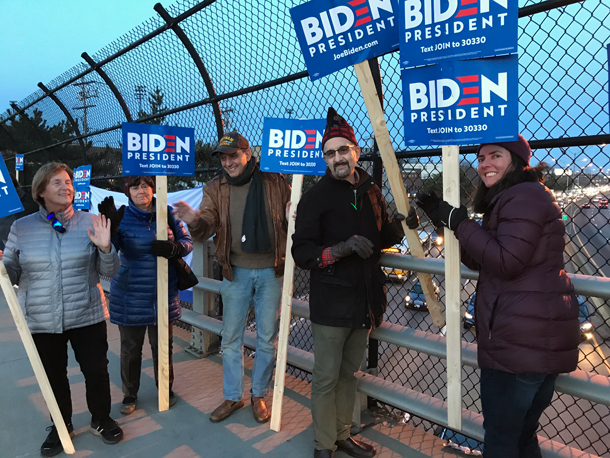 DOERING: This “Go Joe!” crowd had found a strategic sign-waving spot, and one bundled-up supporter couldn’t wait to say why she was there.

CAROLINE: I’m here to support Joe Biden. He’s been a champion talking about climate change way back in the ‘80s; I feel that he is our man to beat Trump, in the general election in November.

This is where all the commuters are leaving Boston, they’re all sitting in traffic as they’re leaving the city, coming this way. So it’s a good publicity spot.

CAROLINE: Now I’m happy, I was waiting for that.

DOERING: A man wearing a Vietnam Veteran hat held a sign too. 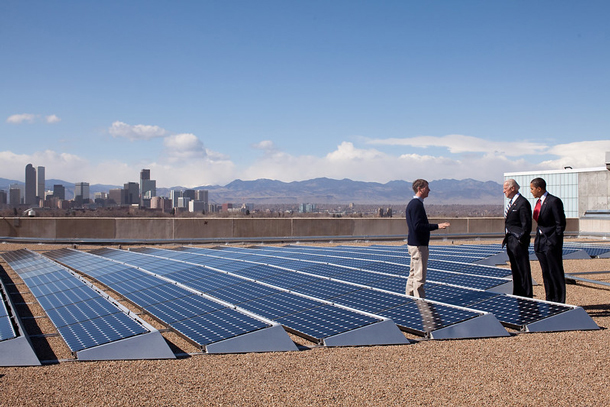 ROBERT: When it comes to climate, we’re not gonna make it with another four years with Trump, and it’s very very scary. And the reality is, we have to really get serious about that, and I believe that all of the Dem candidates can do that, but Joe Biden uniquely has the best shot of winning. So I think the future of our democracy and the future of the planet itself really depends on this election.

DOERING: On Super Tuesday, Joe Biden was the preferred candidate among voters who said climate change was the most important issue to them, according to a Washington Post analysis of exit polls. Climate has been a key part of his campaign, although some of his opponents have called for more radical action. Back when the Biden campaign was still struggling, he spoke about his climate priorities at a town hall in Vinton, Iowa.

BIDEN: I think we have to get to the place where the single most focused issue for this country and the world is climate change. [APPLAUSE] It is climate change. And there’s a lot we can do about it. We’re the only country in the history of the world that’s turned great problems into enormous opportunities.

DOERING: For many Democrats, Joe Biden represents the promise of a return to a pre-Trump Presidency, but this time with a greater commitment to climate action than President Obama was able to achieve. Vice President Biden would leverage 3.3 trillion dollars in private investment to drive emissions down to net-zero by 2050, in what he calls a “Clean Climate Revolution”, starting with investment in low-income and minority communities. Here he is at the Democratic Primary Debate in Nevada. 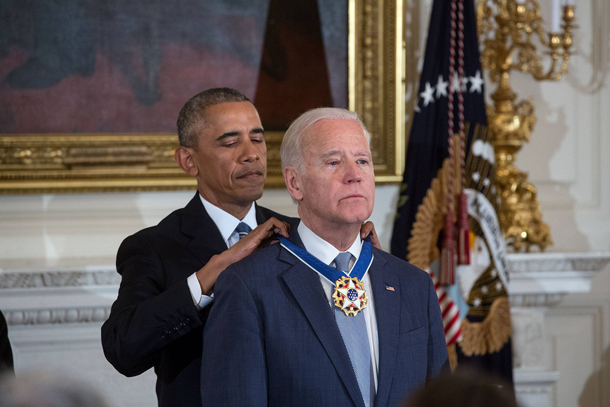 DOERING: The Biden climate plan offers a Green New Deal, which would put a price on carbon and invest 1.7 trillion dollars in public funding over the next decade for clean energy technology, job retraining, electrification of infrastructure, and energy efficiency improvements.

BIDEN: What I would do is number one, work on providing over $47 billion we have for tech and for making sure we find answers, is to provide a way to transmit that wind and solar energy across the network of the United States; invest in battery technology. I would immediately reinstate all of the elimination of what Trump has eliminated in terms of EPA. I would make sure that we got the mileage standards back up, which would have saved over 12 billion barrels of oil, had he not walked away from it, and I would invest in rail.

DOERING: Like other proponents of a Green New Deal, Joe Biden says climate change presents an opportunity to create jobs, especially good-paying union jobs. That resonates with members of the Local 103 chapter of the International Brotherhood of Electrical Workers, who came out to support the Biden campaign on the windy Mass Pike. Among them, Dan Daly, who has run for Boston City Council. 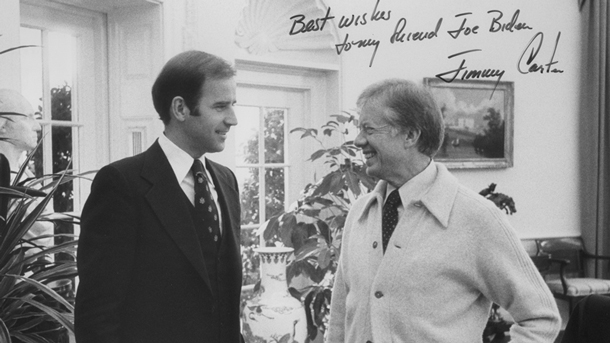 Senator Joe Biden and then-President Jimmy Carter in the 1970s. Joe Biden focused his 1972 campaign for Senator from Delaware on civil rights, the environment, and “change”, among other matters. (Photo: Office of United States Senator Joe Biden, public domain)

DAN: I’m an electrician. Joe Biden supports the IBEW, which I am a member of, and he has a great infrastructure plan: He wants to fix our broken electrical grid; renew all the rail lines with electric power, and he has a huge solar component to create renewable energy, and wind as well. With good-paying jobs; jobs for America, and power for America.

DOERING: The Joe Biden event was powered by enthusiasm, especially from a middle-aged woman wearing a bright red coat.

DOERING: As traffic crawled along the Mass Pike, a 22-year-old Boston College student said the climate crisis demands a leader who can take charge, and put pressure on the rest of the world to do its part.

22-YEAR-OLD: Oh, it’s very important, because as a young person, it’s something I’m going to have to live with my entire life, and it’s really the existential threat to the planet. So I think it’s very important, it’s one of the main reasons I’m supporting Joe, actually; I think that he would be uniquely able to bring a coalition of nations together to fight a problem that we alone as a country cannot solve by ourselves.

DOERING: And that’s one of Joe Biden’s key points. 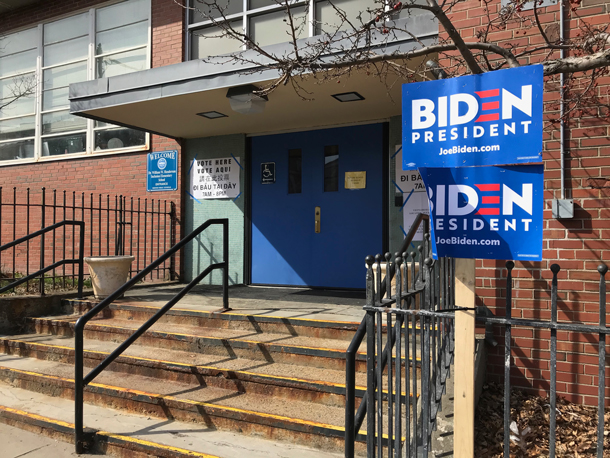 DOERING: That’s a key reason why a voter at the Beech Street Center in Belmont, Massachusetts decided to go for Joe Biden on election day.

PHILIP: I think he understands the world as a global village and therefore we have duties and responsibilities beyond our borders to make sure we are operating on the same page when it comes to keeping our environment clean, for all of us. And therefore when he talks about solving environmental issues and the USA taking the lead, he knows exactly what he’s talking about.

DOERING: For this man, climate change is all too real.

PHILIP: Climate change is here with us. In fact, this winter, I’m calling it, “the winter that never was”.

DOERING: He hopes his vote can help change the outcome for climate policy.

SENTHIL: The political will to do something is not they're currently in the US gov’t. And without the political will, the steps that individuals take are good things, but the big push has to come from government.

DOERING: He told me he thinks Joe Biden has the best shot at leading this country and the world on addressing climate change.

And by the way, thanks to our politics team, Isaac Merson and Anna Saldinger, for their help on this story.

Hear our story on the climate legacy of the other Democratic frontrunner, Bernie Sanders