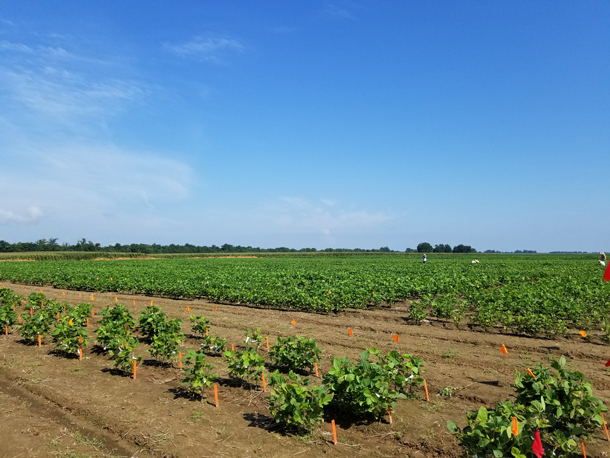 WWFUS hopes that a research-based pilot project could demonstrate the best crops to grow in the mid delta Mississippi region, in order to manage the most efficient transition for all stakeholders (Photo © Julia Kurnik, World Wildlife Fund)

Droughts and extreme weather are already taking a toll on the produce grown in the Central Velley of California. Now researchers from the World Wildlife Fund have found that the mid-Delta region of the Mississippi River, where rich soils currently mostly grow commodity crops like rice, corn, and soybeans, is ripe for growing more specialty crops such as fruits and vegetables. Jason Clay of WWF spoke with Host Steve Curwood about how the types of crops now grown in California could also be grown in the Mississippi mid-Delta region to enhance climate resilience and address poverty, food waste and food insecurity in America’s Heartland.

When you take a juicy bite out of a honeydew melon or chomp down on a handful of almonds, chances are that food came from the central valley of California. This region has perhaps the world’s largest patch of class one soil, with abundant sunlight and no winter snow. But as the climate has changed, the flow of water from the Sierra Mountains has become less reliable. There have also been more heat waves and choking smoke from wildfires. So scientists and economists from the World Wildlife fund are Next California dreamin’. They say the Mid-Mississippi river delta region is ripe for a switch from commodity crops such as cotton, rice and soy, to more high value specialty crops such as fruits and vegetables. For more on the plan they call, “The Next California” I’m joined by one of its co-authors Jason Clay, Senior Vice President of Markets at World Wildlife Fund US. Jason, welcome to Living on Earth.

CLAY: Thank you. Nice to be here.

CURWOOD: So how did you get into this study of farming and food?

CLAY: Wow. Well, I actually grew up on a farm, a very small farm in northern Missouri. And we lived on less than $1 a day. And so, as you might imagine, I couldn't get away from farming fast enough. But everything I've done in my life has kind of led me back to farming. And about 20 years ago or so I started to work with WWF and convince them that, in fact, the biggest threat to the planet to biodiversity to ecosystem services is where and how we produce food. And from that point on, we begin to develop a program around agriculture around livestock around aquaculture, seafood. And so I've been working on that since then. 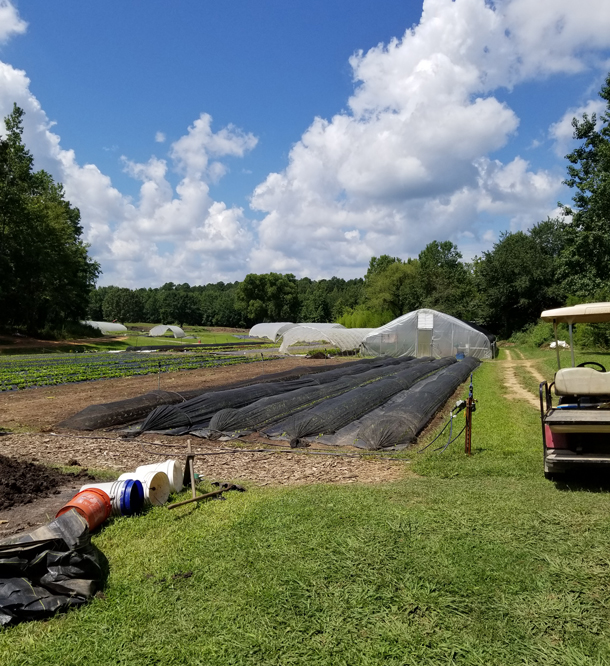 The plan hopes to engage smaller scale farmers, those who could most benefit from specialty crops with higher per-acre value than commodity crops. (Photo © Julia Kurnik, World Wildlife Fund)

CURWOOD: So Jason, what's the importance of California to our food systems?

CLAY: For the last hundred years or so California has become the major source of the fresh food that we eat. About a third of all vegetables about two thirds of the fruits and nuts all come from California. So, almonds and pistachios and things like that, but also cling peaches and olives and Kiwi and honeydew. California is just very important to the food system. 100 years ago it wasn't, but it is today.

CURWOOD: I'm getting hungry, just listening to list all those things so you can get from California. What are some of the risks to this system? Looking ahead?

CLAY: Well, it's actually not even looking ahead we're already seeing that California is being affected by droughts by fires by freezes late in the spring, but also by winters that are too warm to actually allow the fruit trees to bloom well and have a good, a good crop the next year, we're seeing low or at least below normal snowfall, in the mountains. And then in the summer, the snow melts too fast so that we don't have enough water all year round to irrigate the crops. We're losing at least the last of four crops and maybe the last two, depending on where you are and what year it is. So California is being affected by climate change already. This is happening all over the country, but we're not as dependent on the other parts of the country as we are California.

CURWOOD: So I understand that you and your colleagues at the World Wildlife Fund have just released a report that identifies the potential of the Mississippi River mid-Delta region, that's near Memphis, as I understand it, as perhaps an agricultural engine for fruits and vegetables. You're calling it the next California plan, give me a little context of it.

Newer farming methods such as hoops could extend the growing season in the mid-delta, which might prove critical to the plan’s success. (Photo © Julia Kurnik, World Wildlife Fund)

CLAY: So if we're not going to be able to rely on California for the same quantities and range of fruits and vegetables that we've been getting from there, the question is, where are we going to get them from? And when we started asking this, we began to realize that the mid-Delta region, which is kind of most of Eastern Arkansas, Southeast Missouri, Western Tennessee and northwest Mississippi, that area actually has about the same amount of land in production as California does. California has about three quarters of the land in specialty crops. And in this area in the mid-Delta, it's only about a quarter. So there's a lot of room to expand production there. But this is an ideal place to see, you know, could we actually begin to shift production in a logical, organized way into this region without major disruptions in the food system? Because if we can anticipate this change, we can can make it happen much more smoothly, much more efficiently and a lot cheaper without the crisis that would come with trying to replace California overnight.

CURWOOD: But tell me, Jason, that area, the Mississippi Delta is well it's kind of hot and humid sometimes. I mean, California's drier and how are these specialty crops? How are fruits and vegetables going to do in a place like that?

CLAY: So that's exactly what we're looking at right now, which crops of all those grown in California could be grown in this region, and which ones would actually do better in this region than they do in California. In this area, the problem is not lack of water. In fact, there's plenty of water, and there's a lot of rainfall. And as you noted, there's a lot of humidity. There's also a lot of heat at night. And all those things affect the types of crops that you can actually grow. But fruit trees, for example, which require cold winters are perfect for this area. In fact, they're better than in California. There's also the fact that in this region, there's a lot of poverty, a lot of unemployment. And so the labor issue is not potentially as much of a problem as it is in California. But the biggest thing from the point of view of profitability is that the cost of land in the region in the mid-delta is about 20% of what it is in California. But California is not going to stop producing the things that it produces well, but the more water intensive crops, the lower value crops, those are the ones that are probably going to go. We think some could be picked up in the mid Delta. But going forward, we might have a more distributed food system. Before California, food was produced in New Jersey and Ohio and Michigan and various places, all you know, during the summer months when they could grow and it was canned for the rest of the year. Now we expect fresh and so it's a different kind of system. But we're probably going to get back to a much more distributed food system with the impacts of climate change. But if we're if we're thinking about producing food in different places, we can also think about different systems to, of infrastructure to actually distribute the food. One of the things that struck me about farming in the Midwest is that most of the farming areas are actually food deserts. 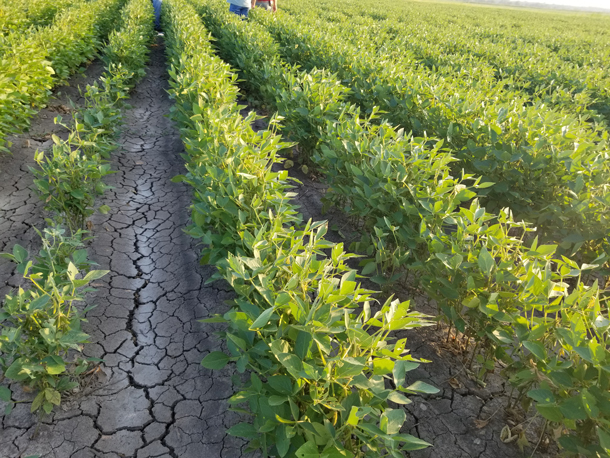 Compared to the central valley of California, water and rainfall are much more plentiful in the floodplains and rolling hills of the mid-Delta Region (Photo © Julia Kurnik, World Wildlife Fund)

CLAY: Because they don't have access to fresh food all year round. And this is no exception. In fact, people in the mid-Delta region are like number 49 or 50, in terms of some of the states that eat the fewest fresh fruits and fresh vegetables.

CURWOOD: Jason, some folks point out that we waste about a third of our food. Some of it, you know, becomes science experiments in the back of our refrigerators if we've gone out to eat. Others are back in the distribution system that never make it to market. How would the next California plan address the issue of food waste, do you think? 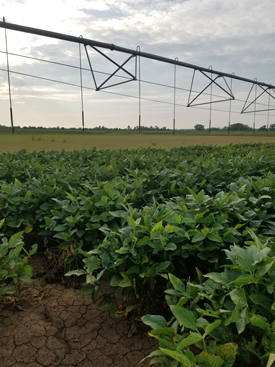 Irrigation is a major concern for many farmers, and they will have to adapt as the weather becomes increasingly unpredictable (Photo © Julia Kurnik, World Wildlife Fund)

CLAY: Well, I think that food waste is a huge issue. In developed countries, it tends to be more the food that we waste on our plates and in restaurants. But in developing countries, it's more about post harvest losses and storage and diseases and pests and rodents and all kinds of things that that destroy food, but it does come to 35 to 40% of all the food in every country. What the 'Next California' does is reduces the transportation involved in food. It increases the quality of food on the shelf by having it more local. And it increases the time that it's on the shelf, we can really take advantage of how close this region is to Chicago and St. Louis and Kansas City in New Orleans and even through the intercostal canal up to the east coast. And so those things all should reduce food waste, but it's got to be about handling and about consumer awareness that we do these things as well because food waste is almost a way of life now. It's we're a throwaway society and we throw away a lot of food. Food doesn't have the value that it needs to have for us to think of it as precious.

CURWOOD: Jason Clay is a senior vice president of markets at World Wildlife Fund US and helped write the proposal called 'The Next California: Phase One', Jason thanks so much for taking the time with us today.

CLAY: Thank you. It was a real pleasure.

CURWOOD: For more on how northwestern Mississippi and nearby Arkansas could shift away from cotton, soy, corn and toward more fresh fruits and vegetables, go to the Living on Earth website, loe.org. There you can see the World Wildlife Fund suggestions for the next California.