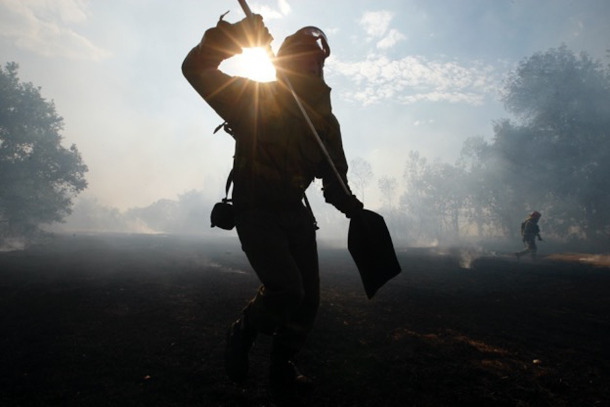 Over 2000 California State Prison inmates have been deployed on work-release to fight the raging wildfires, and a new law would allow them to get jobs with the state’s firefighting services upon their release (Photo: Carlos Cortés López, Flickr, CC BY-NC 2.0)

In this week’s look beyond the headlines, Environmental Health News Editor Peter Dykstra joins Host Steve Curwood to discuss a new law passed in California which will allow state inmates who have been fighting wildfires while serving prison sentences to get jobs in those same firefighting organizations upon their release. Later in the segment Peter and Steve take a deeper look at the climate costs of plastic manufacturing, and finally, their powers combine to celebrate the 30th birthday of Captain Planet, the blue-skinned, green-haired cartoon environmental champion.

CURWOOD: And joining us now from Atlanta for a look at the world beyond the headlines is Peter Dykstra. Peter's an editor with Environmental Health News, that's EHN.org and daily climate.org. On the line now, Hi there, Peter, how you been?

DYKSTRA: I'm doing all right, Steve. What I want to talk about to start today is just an awful situation with wildfires. California has always had sort of an auxiliary of firefighters that come right out of the state prison system, this year there are about 2000 inmates that are cleared to work as firefighters along with the feds, the Cal forestry people and others. There's a bill that was just signed by Governor Gavin Newsome, that would make it easier for the inmate population once they get out of prison to have their records cleared so that they can work full time with their day jobs as firefighters.

DYKSTRA: It is indeed it doesn't really allow for inmates to take part in every part of firefighting, for example, they can't work as EMTs. But they can work out in the heat in the flames in the smoke, along with their counterparts, who do it professionally. Now, all of this training and experience that those inmates acquire in these hellacious fire seasons we've seen can be put to good use as they rejoin society.

CURWOOD: Hey, what else do you have for us today, Peter?

DYKSTRA: There are a couple of reports out from nonprofits in recent months about the impact of plastics in climate change. Plastics, of course, are petroleum based products. One report estimates that plastic production over 10 years would be the equivalent of 300 new coal power plants in terms of their impact on the Earth's climate. The oil industry is looking at the eventual demise of its main products for oil and gas extraction, they want to make sure that plastics, even if fossil fuels go away, that plastics don't. And that's a lifeline to the oil and gas industry.

CURWOOD: And of course, plastic is more than just a carbon problem then, I mean, it winds up everywhere.

DYKSTRA: It's a carbon problem, we've seen information coming out in the past few years about plastic rain, micro particles of plastics that actually go up in the atmosphere fall back to Earth, getting soil potentially impact our crops, and of course, the deep impacts that we've seen, not just on water quality, with the Pacific Ocean plastics blob, every freshwater stream in the country and in the world has a huge and distressing amount of plastic waste poured into it which eventually makes its way to the ocean. It's a mess and one that we're finally beginning to get a little bit of a grip on.

CURWOOD: And you know, we shouldn't be so surprised about this. I mean, it takes millions of years to convert plant matter into hydrocarbons into coal and oil and such. So the fact that these compounds last for a very long time, in any form is like kind of basic chemistry. Hmm. 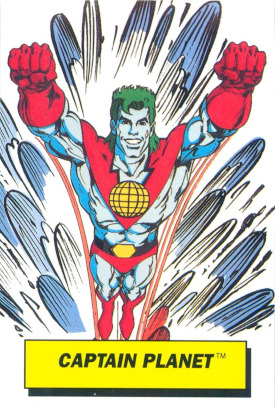 DYKSTRA: We're talking basically for the functional equivalent of life as we know it on Earth. Once we make those plastics, they're here forever, whether it's in a landfill, in our bodies, or in our waterways.

CURWOOD: Alright, Peter. Well, you started with good news. I guess this is not such wonderful news about plastic, but maybe when we turn to take a look at history, I can get a smile.

DYKSTRA: Well, you can get better in the smile, you can get a birthday party for Captain Planet, September 15 1990, the first episode of the animated action feature with Captain Planet and his blue skin and his green hair, maybe with a little bit of gray in it now. 30 years ago. They stopped original production a while back, but Captain Planet is still in syndication and still having an impact on now a couple of generations of kids who learned some of their first environmental knowledge from a cartoon.

CURWOOD: Peter Dykstra, thanks so much. Peter's an editor with Environmental Health News that's EHN.org and daily climate.org we'll talk to you again real soon.

DYKSTRA: The power is yours, Steve.

CURWOOD: And there's more on these stories at the living on earth website LOE.org

Learn about some of the origins of Captain Planet

Read about the Captain Planet Foundation, the spinoff charity arm of the children’s environment-centered cartoon