How Biden Can Keep It in the Ground 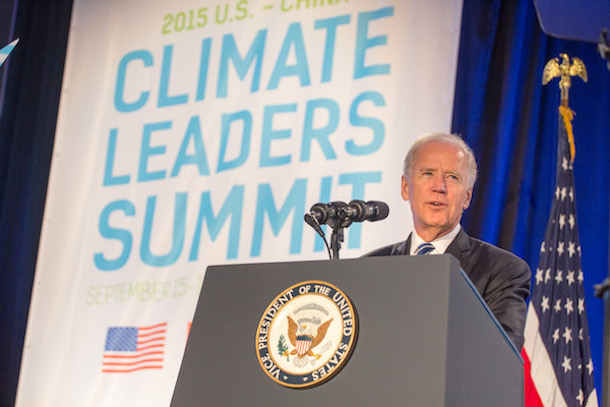 The Biden-Harris administration has pledged to move the United States towards a 100% clean energy economy, but this is challenged by national oil and gas extraction and a need for renewable energy sources. (Photo: The White House, Flickr, CC BY 2.0)

President-elect Joe Biden has vowed to put the U.S. on a path to achieving "economy-wide net-zero emissions no later than 2050." Halting or reducing fossil fuel extraction on public lands will be among key steps the new administration will need to take in order to meaningfully move towards that goal. Vermont Law School Professor Pat Parenteau joins Host Steve Curwood to discuss how the Biden-Harris administration can pursue a new agenda on public lands and climate.

Just as President Trump’s denial of the science of Covid-19 is amplifying its deadly course, his denial of the science of climate change is speeding up the world’s rush into deadly climate disruption. All that will make for heavy lifting by the incoming Biden-Harris Administration as it will soon try to reverse and realign climate and environmental policies to respect the truth of science. Halting or reducing the exploitation of public lands to avoid adding more global warming gases to the atmosphere is a task the simple math of climate disruption demands. A key crucible to forge policy with scientific truth is the law, and joining us now to look at some legal tools for the Biden team to renew and boost federal climate protection efforts is Pat Parenteau of Vermont law school. Pat welcome back to Living on Earth!

PARENTEAU: Hey, Steve, good to be back.

CURWOOD: Now, on the scale of importance, how big a deal is it this protection of public lands when it comes to protecting the climate?

PARENTEAU: You know, everything is important, and no one thing is enough. So the protection of these public lands not only from the standpoint of eliminating oil and gas development, but just protecting the integrity of these landscapes, these ecosystems that are already under tremendous stress from climate change is important. So it's doing two things. It's reducing our use and reliance on fossil fuels, and bringing these alternative fuels and technologies online faster. And it's also preserving the resilience, as we call it, of the landscape to deal with things like catastrophic wildfires and drought and the release of pest organisms as a result of the warming of the temperature, and all kinds of conditions that are changing in response to these global changes in climate change. So there's lots of reasons why preserving our public lands, as stores of carbon, as ecosystems to support species of plants and animals that are under tremendous stress. These are the things that we have to start thinking about, and evaluating. 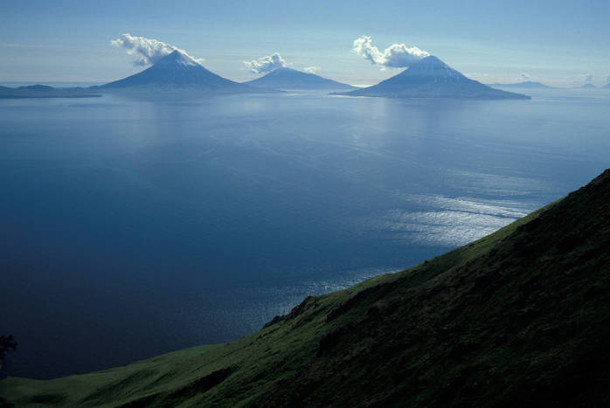 A picture of the Islands of Four Mountains in the Arctic National Wildlife Refuge. (Photo: Ed Bailey, USFW, Flickr, CC BY 2.0)

CURWOOD: One of the budget reconciliations that was passed during the Trump administration allowed essentially drilling in the Arctic National Wildlife Refuge. Sounds like Mr. Trump is maybe trying to move forward with that before he leaves office. What are the odds there?

PARENTEAU: Yeah, so that's another one where the federal government and the President has the authority to reverse that decision. If leases had been issued already, that would be a different situation, my understanding is they haven't actually awarded any leases. When that happens, it gets more complicated, because now people that have paid good money for the leases are going to argue you're taking a property right of ours, we purchased the right to develop these resources, you can't simply take it away. So it may be that we're really close to that situation, where the equities, as we call them, will shift in favor of the oil companies. But if he hasn't actually awarded leases, they can stop that program.

CURWOOD: And what now will happen with the pipelines, we have Keystone XL, we have Dakota Access, and a lot of litigation and concern about that, the Biden administration has promised to stop a Keystone XL, what's likely to happen now?

PARENTEAU: I think he might stop Keystone. Dakota Access is a more difficult one, because it's complete in the in the oil is flowing so that's a tougher one to completely stop. But Keystone XL, once again, he can do the reverse of what Trump did. Obama had blocked Keystone, Trump issued a permit to allow it, Biden can come in and do the same thing. This is a presidential permit to allow bringing this oil into the United States from Canada, the courts have said that's completely up to the President. So if President Biden says no, you can't bring oil from Canada's tar sands in Alberta into the United States, that's it, you can't do it. The Keystone pipeline also crosses a lot of federal land. And that's another authority, the President has to say, I'm not going to allow rights of way across federal land for this pipeline. I think the Keystone pipeline is one that Biden is very likely to do to spike to stop it, he's going to get some heat for that from the labor unions, because of course, building pipelines creates a lot of jobs, at least in the short run. So he'll have to take some political heat for that, and probably promised to replace those jobs with some other job growth programs he has in mind. But if he wants to really send a powerful signal, not just to the environmental community, but really to the world, that there's a new administration in power with a firm commitment to doing something about climate change that's the one thing that I think would do it. 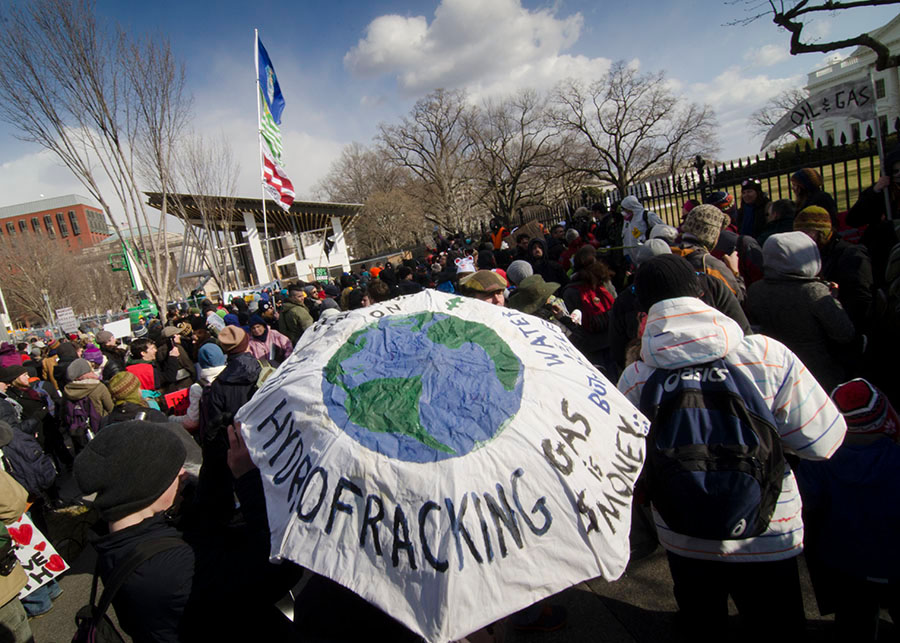 The Keystone XL Pipeline was first proposed in 2008 and it was slated to carry as much as 830,000 barrels of heavy crude oil from the Alberta, Canada oil sands through South Dakota to Gulf Coast refineries. The picture above is of a protest against the pipeline in 2013. (Photo: Blink O'fanaye, Flickr, CC BY-SA 2.0)

PARENTEAU: Right, so Biden has the authority to reverse all the executive orders that Trump issued with a stroke of a pen, he has the authority to direct his cabinet officers to reverse policies that have been adopted by the Trump administration, that can be done very quickly. The thing that's going to take longer is reversing the rules and of course, Trump rolled back a whole number of very critical rules including the Clean Power Plan, the fuel economy rules, the methane gas regulations and right on down the line as you said, over 100 of these rules and policies. For rules Biden is going to have to go through the same steps that Trump did to create the rules. So he's got to go back through the rule making process, he's got to provide public notice opportunity for public comment, he's got to build a record to explain why he's reversing what Trump had done in a way that Trump didn't do very well and Trump lost a lot of these cases in court, the Biden administration is going to have to be more careful and it's also going to have to keep its eye on this new supreme court with this very strong six to three conservative majority, because in the end, some of these really big rules, like greenhouse gas emissions from power plants, they're going to have to get five votes on the Supreme Court to be upheld. So that's a new dynamic. And Trump didn't face that but Biden will definitely have to take account of the fact that he may not have the support of the federal courts, which have been packed with Trump appointees. That's a new challenge for this administration. I think it's one they can handle but they're going to have to do so very carefully.

CURWOOD: How important is the clock here? Some might say that the Clean Power Plan rule making took too much time and was too close to the end to the Obama administration to avoid getting tangled up in the courts. In other words, if Mr. Biden wants to make these changes, how soon does he have to jump on them? 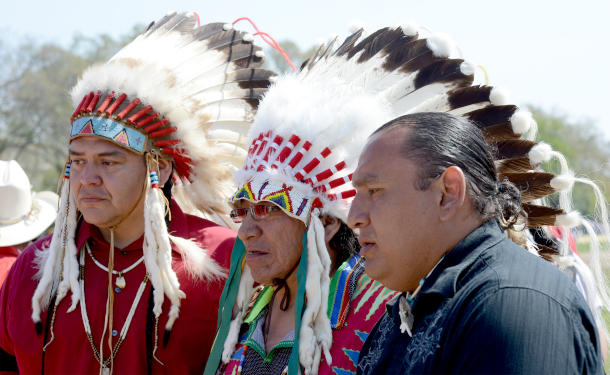 PARENTEAU: You know what, I think they're jumping on it right now. I know many of the people on the Biden transition team for EPA, including people like Joe Goffman, who was one of the authors of the Clean Power Plan and many more. So I think Biden's team day one will already be poised to start the work that's needed to reverse the Trump administration's legacy, if you will. So I think we're gonna see a fairly brisk approach from the Biden administration with really competent people carrying out these jobs. And I think they're going to have a much better track record in court going forward.

CURWOOD: Pat Parenteau, is a law professor at the Vermont law school. Thanks so much for taking the time with us today, Pat.

PARENTEAU: It's a pleasure to be with you, Steve.